by NS VIA FAN
Wed Aug 27, 2014 3:07 am
It might be Amtrak’s Adirondack now but for those first couple of years beginning 40 years ago this month……it was definitely Delaware & Hudson’s train:

August 1974.....The through (MTA) coach from Grand Central have been pulled from the connecting train at Albany-Rensselaer and will be added to the waiting D&H power along with a leased CPR Skyline Dome for the run to Montreal. 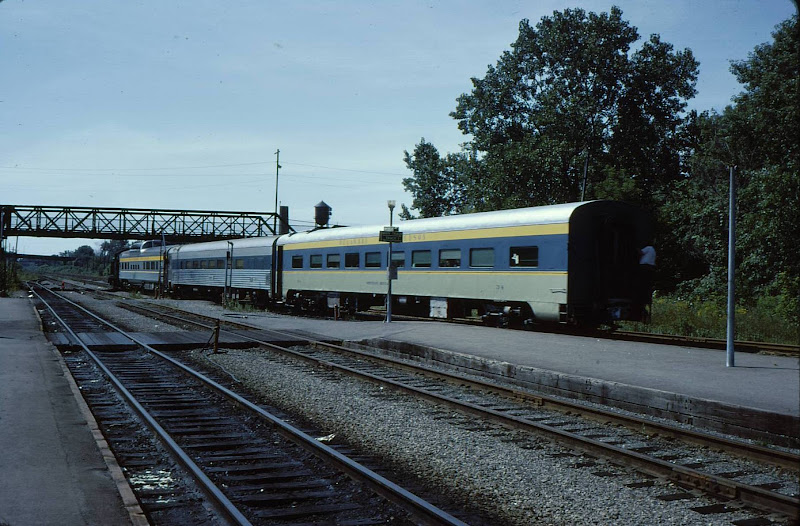 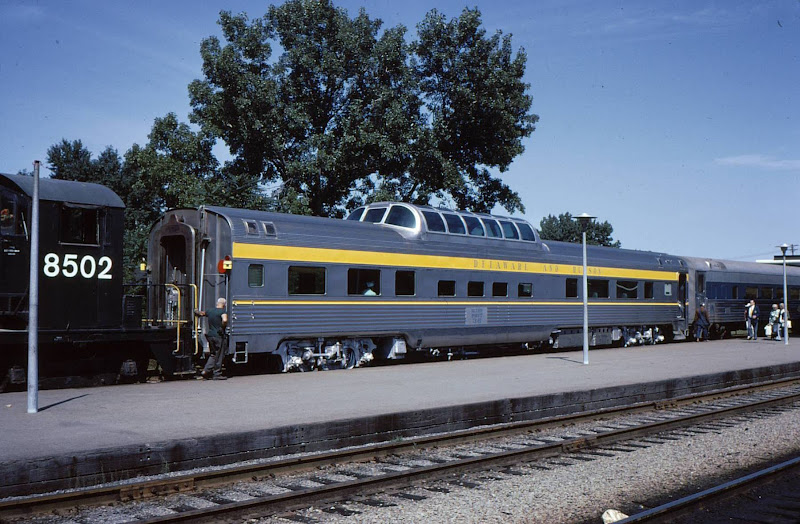 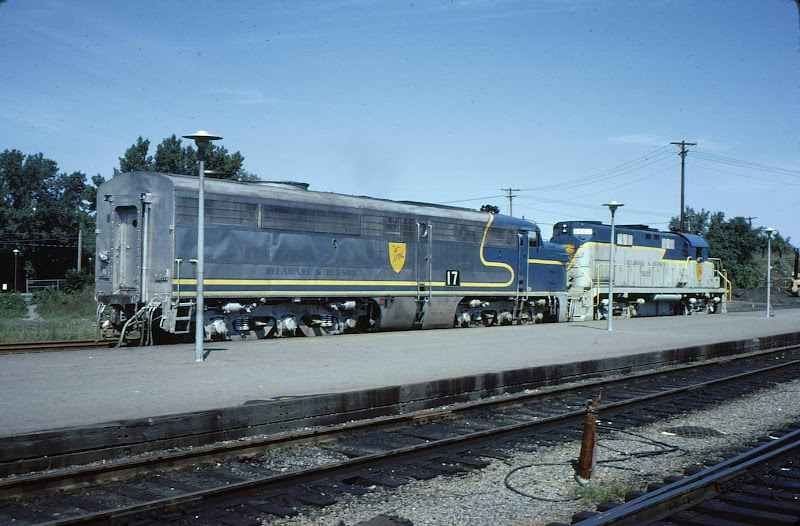 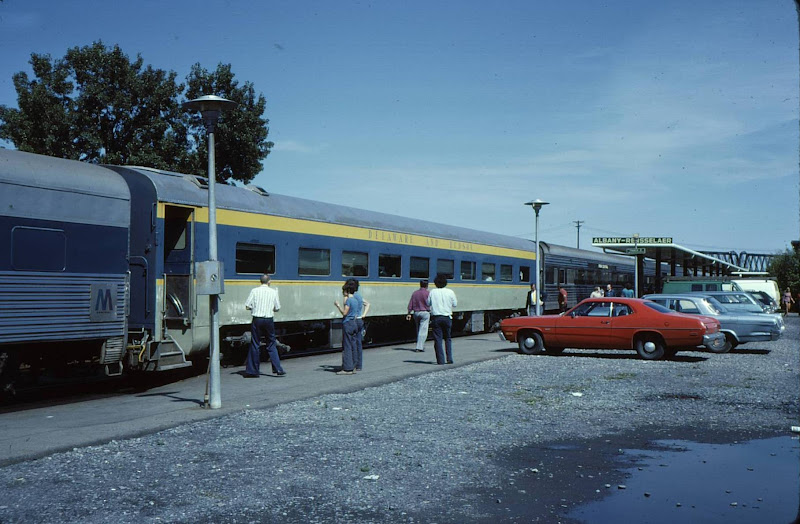 Meeting the southbound train at Whitehall: 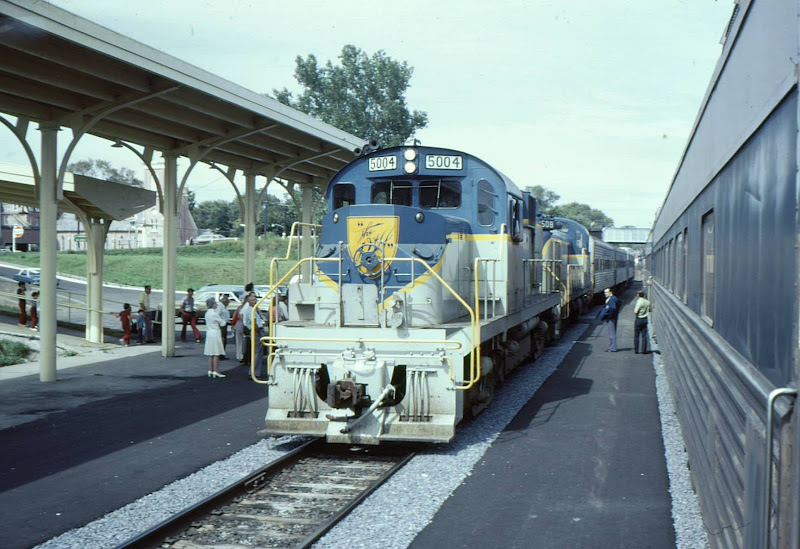 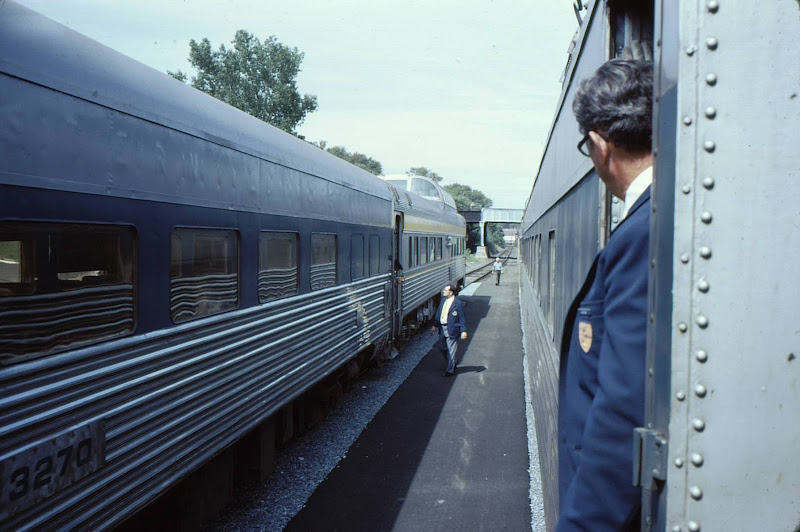 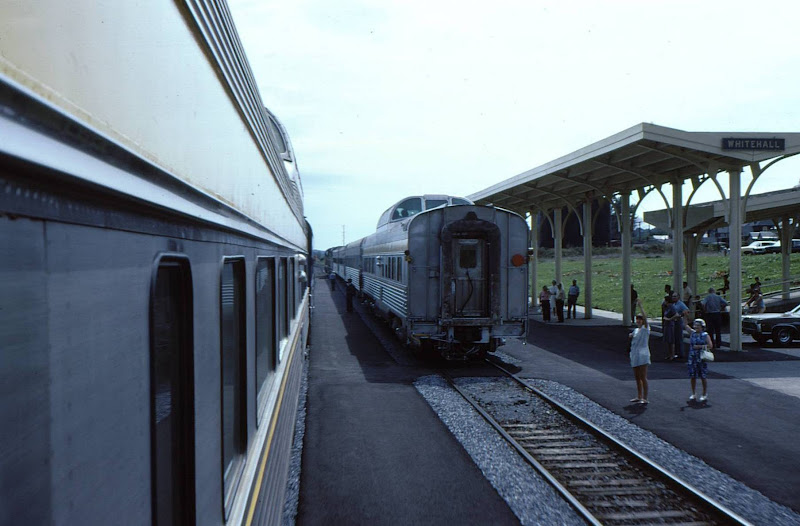 ……and an evening arrival into Windsor Station, Montreal 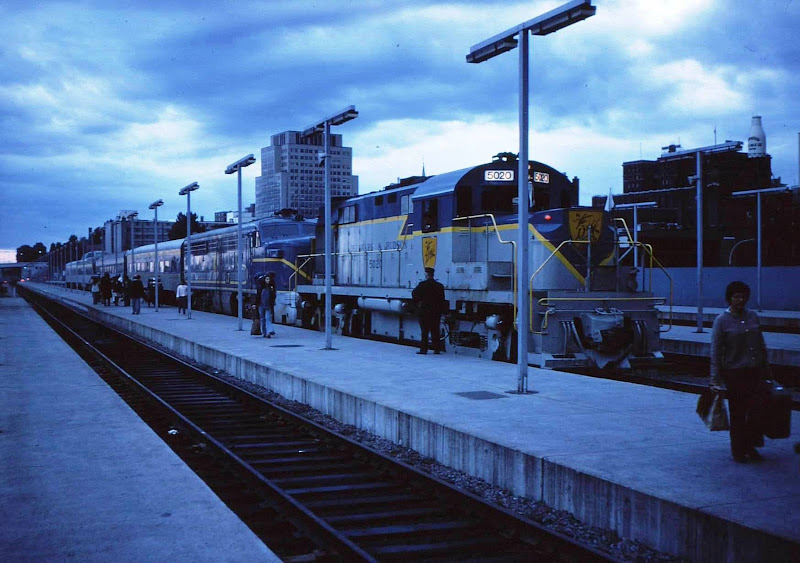 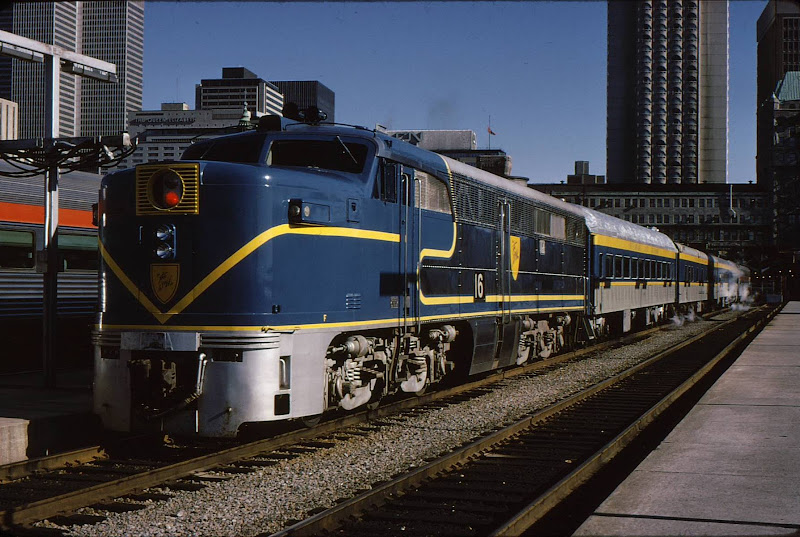 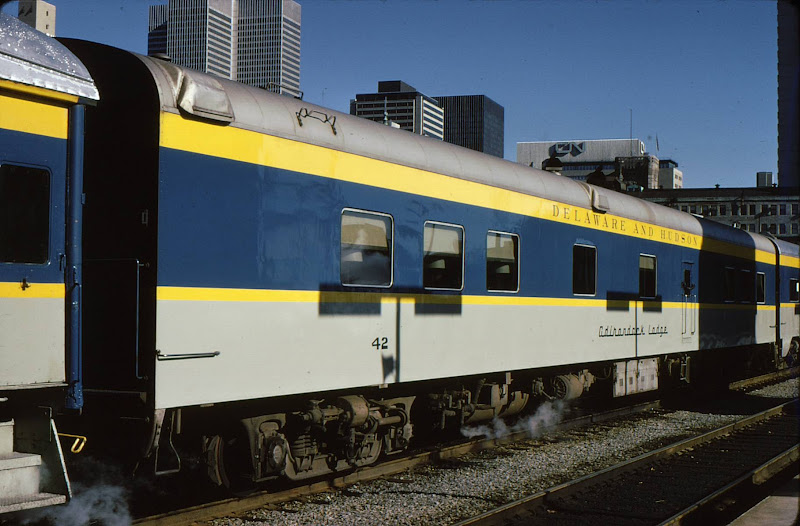 About the only hint that Amtrak was involved in those early years was the Timetable: 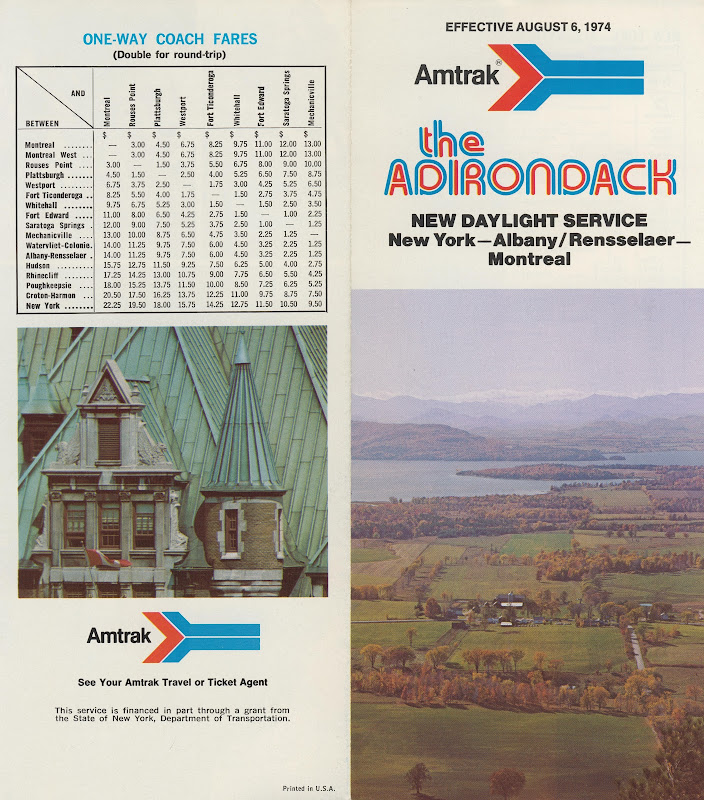 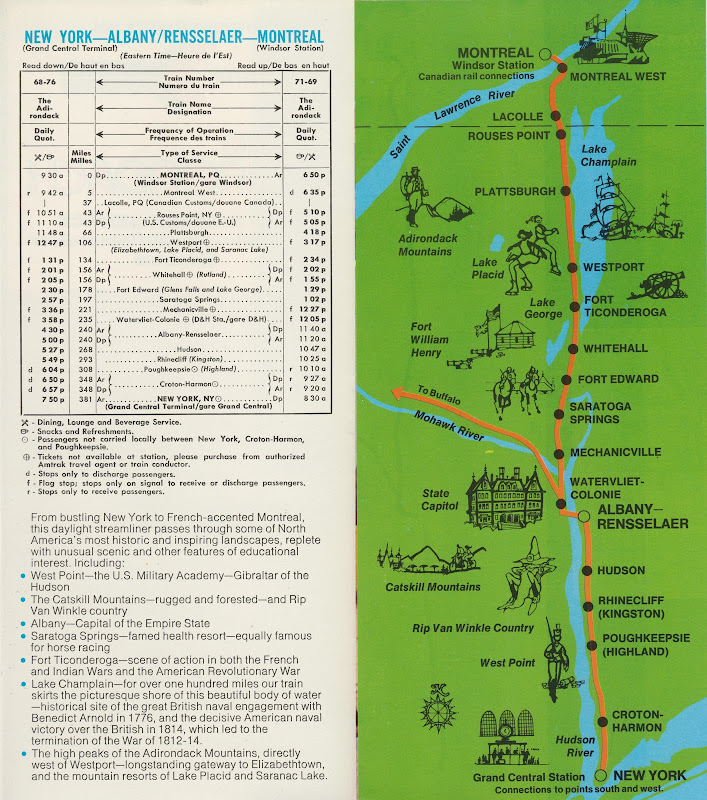 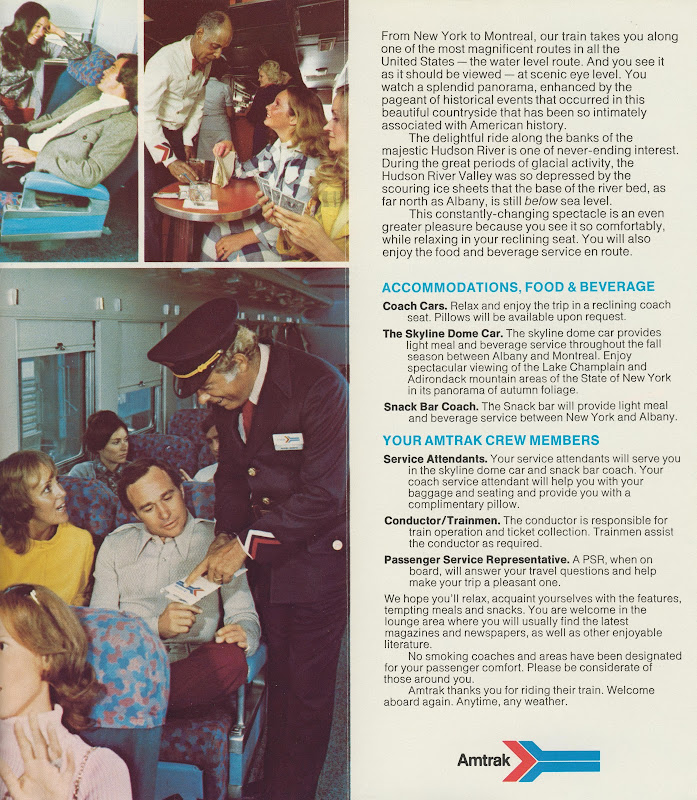 by Ken V
Thu Aug 28, 2014 12:01 am
It's interesting that the Amtrak map shows Montreal West on the south side of the St. Lawrence River when it's actually on the north side. Might it be to be done that way to be consistent with the Montrealer where St Lambert is on the south shore?

Ken V wrote:It's interesting that the Amtrak map shows Montreal West on the south side of the St. Lawrence River when it's actually on the north side. Might it be to be done that way to be consistent with the Montrealer where St Lambert is on the south shore?

My guess it was just a mistake.....Or:.....in planning for the trains restoration, did they originally intend to send it to Central Station instead of Windsor Station?.....and this would have made sense: The Montrealer had just been inaugurated two years earlier and it used Central so why have two separate stations for only two trains a day in a foreign country.

That map in the original timetable (above) basically shows the route the Adirondack uses today (but didn’t start using until 1986).....following CN instead of the Napierville Jct Railway into the city. Central Station is labeled Windsor Station, Cantic is labeled Lacolle and Saint Lambert is labeled Montreal West.

The timetable was re-issued with a slight correction to the map: the Montreal West stop was at least moved across the river (and this timetable was bilingual: English/French).

Also note on the map, the train used “gare” Grand Central in NYC and the D&H line through Mechanicville and Watervliet-Colonie instead of NYP and Schenectady as it does today. 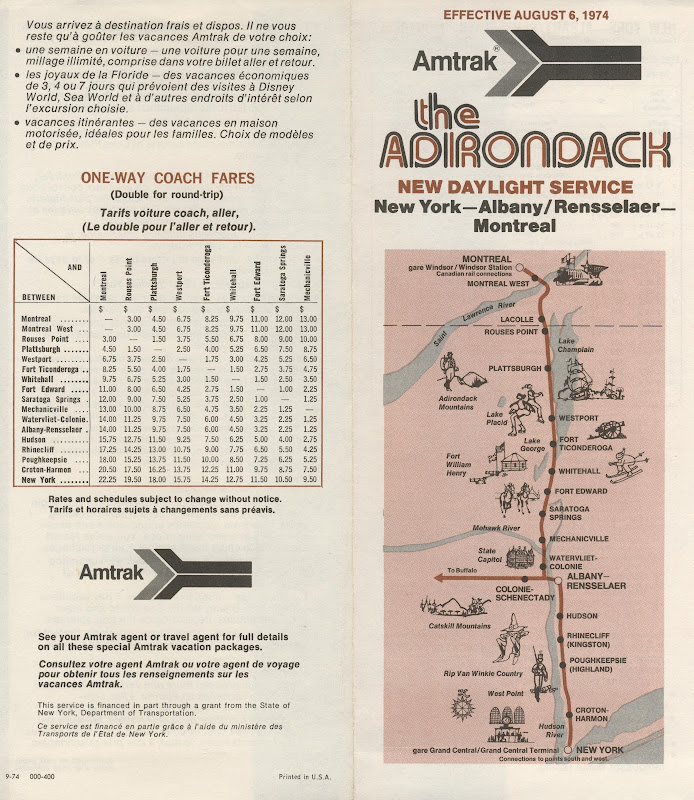 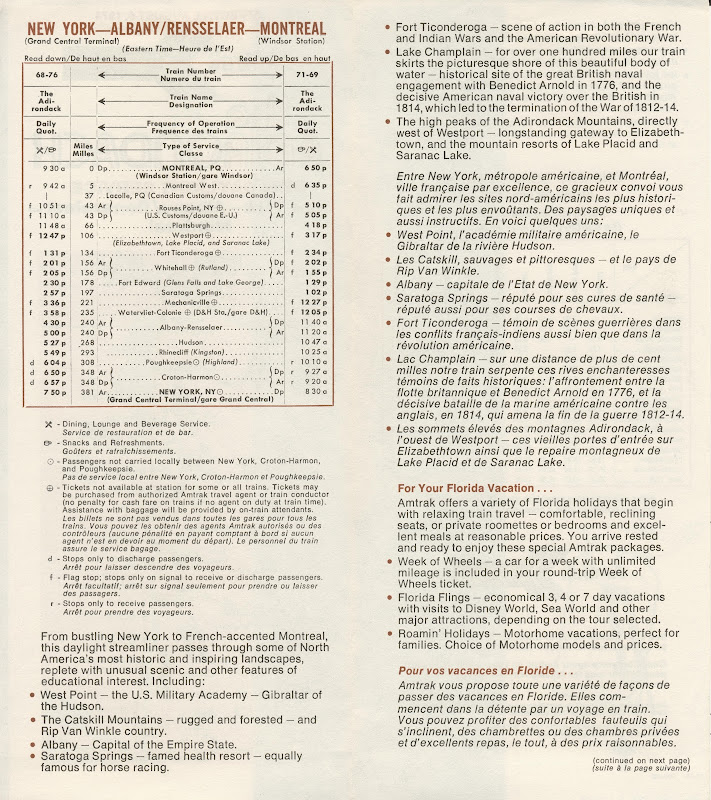 Here’s my rough photo-shopped version of what the route to Windsor Station should have looked like on that first map in the original timetable. 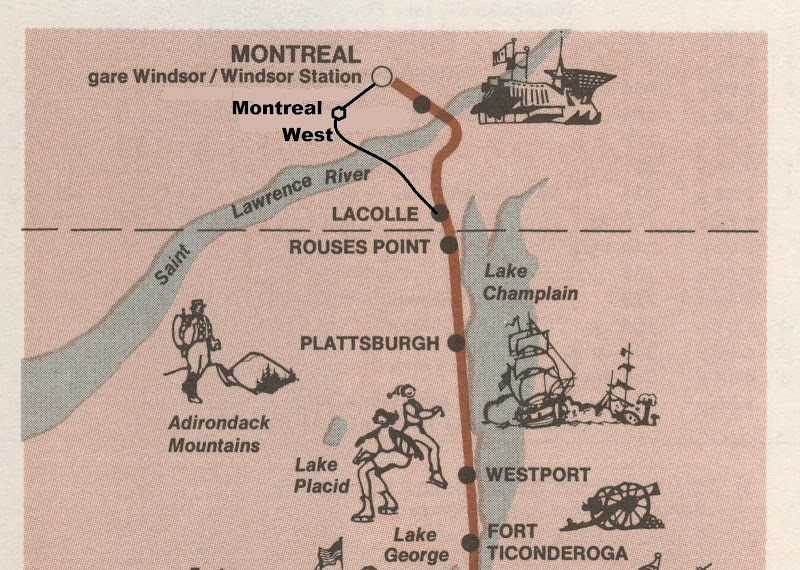 
Inside on Page 1 is a "Message to our Patrons:"

Welcome aboard The Adirondack on behalf of the train staff and my fellow employees of Delaware and Hudson, North America's oldest
continually operated transportation business firm.

Passenger train service over this scenic route of D&H through New York State's North Country has been re-instituted under the aegis of
the 1974 NYS Rail Freight and Passenger Service Preservation Program administered by the NYS Department of Transportation.

We at D&H are happy to be a part of this team effort to reinstitute a viable passenger train service over the shortest,fastest and most
scenic rail route between New York City and Montreal.

Because it can only be successful with your help, we hope that it meets with your continued support and patronage.

In that connection, any comments you have about our service will be most welcome and should be addressed to D&H Assistant VP-Service
J.T. Colpoys, D&H Building, 40 Beaver Street, Albany,N.Y. 12207


Inside this booklet are 10 photographs that include a "through-the-rocks" picture at Willsboro and the stations at Lacolle,Quebec and
Montreal's Windsor Station - which is an older picture for the booklet's time (mid 70s) noting a Montreal street car in the foreground...

The center spread is a map of the Adirondack route with emphasis of the D&H's Albany-Montreal operational segment...

The text is about the route and stations served and includes historical information...

The back cover has three logos on it: Those of NYS DOT, the NYS Seal and the D&H's "Bridge Line to New England and Canada" herald...

There were two inserts: First - a two-sided Adirondack schedule dated April 27 and June 29,1975 along with this notation:
Last trip - Trains 34(N) and 35(S) June 28,1975 - and - First trip Trains 36(N) and 37(S) June 29,1975
The only mention of Amtrak anywhere was in this schedule's reference notes: "Tickets not available at station - Please purchase
from authorized Amtrak Travel Agent or Train Conductor" - Added is "Tickets May Be Purchased On The Train If Necessary"
There is no mention of Amtrak anywhere in the booklet itself...

The second insert was a yes or no questionnaire that asked these questions:
Was the train clean?
Was the train crew courteous?
Was the coach cool or warm enough?
Was the train on time?
Did you have any trouble getting tickets,schedules or information?
Were the rest rooms clean?
Was the service in the Dining Car adequate?
This insert was to be given to the D&H Conductor or Hostess and notes:
"Help us make The Adirondack an even better passenger train"

I have no scanning capability - the reason for noting some information about this booklet - and I will agree
that era's "The Adirondack" between Albany and Montreal was no doubt D&H's Passenger Train...

by AgentSkelly
Thu Oct 30, 2014 7:10 pm
I remember reading somewhere that when the Adirondack was started by D&H, they had to go hunt down those blue blazers from some collector to use them again?
New Westminster to Amtrak 516, whats up with the extra 4 axles, over?