by unynhmho
Tue Nov 10, 2020 10:37 pm
Unfortunate to hear one of not both cars on the B&ML have been scrapped, but understandable. Perhaps the converted baggage car could have been converted back if one was dedicated enough, which would have (mostly) eliminated the need for an intact interior.

What line in NJ is the Herald Square on, and are there any pictures available online? I'd absolutely love to see the car. A number would be fantastic as well if you happened to have one handy.

It is quite remarkable that there are still so many unknowns and so little known to still be around. Considering all types of equipment, passenger, freight cars, and locomotives, relative to western roads there seems to be just not much from New England left at all. If you look at the number of Santa Fe steam locomotives, for example, still around, it seems like there's an endless supply into the dozens for that road alone. Whereas with New England, you can just about count on both hands the number of true New England steam locomotives left.

by unynhmho
Fri Nov 20, 2020 12:59 pm
Pictures today surfaced of MEC 333 being removed from a building at Waterville. I wonder if it's finally been sold? Apparently, there has been a new wall built that is trapping it from moving, there is not enough space to properly fit on the transfer table now with the addition of said wall. If it's been sold, hopefully, it stays in New England. Interesting how it's now lettered for the Springfield Terminal. 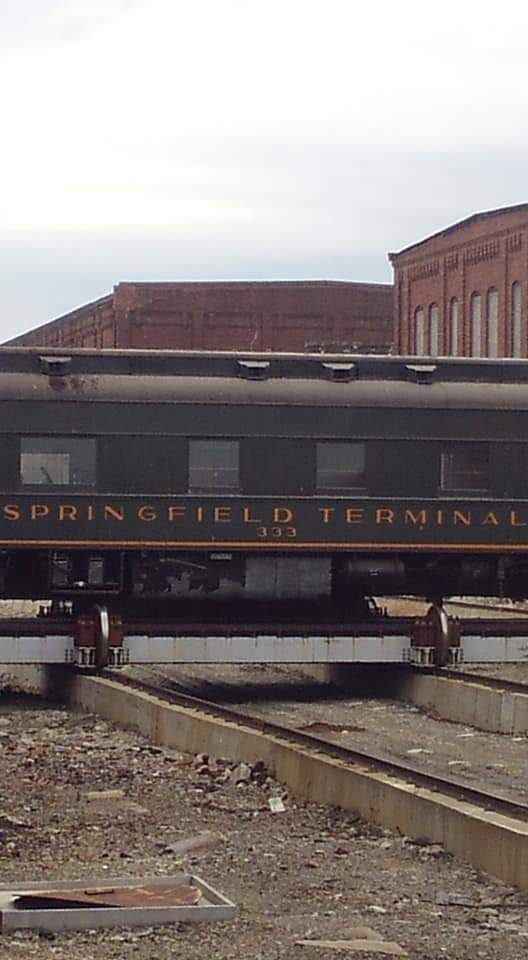 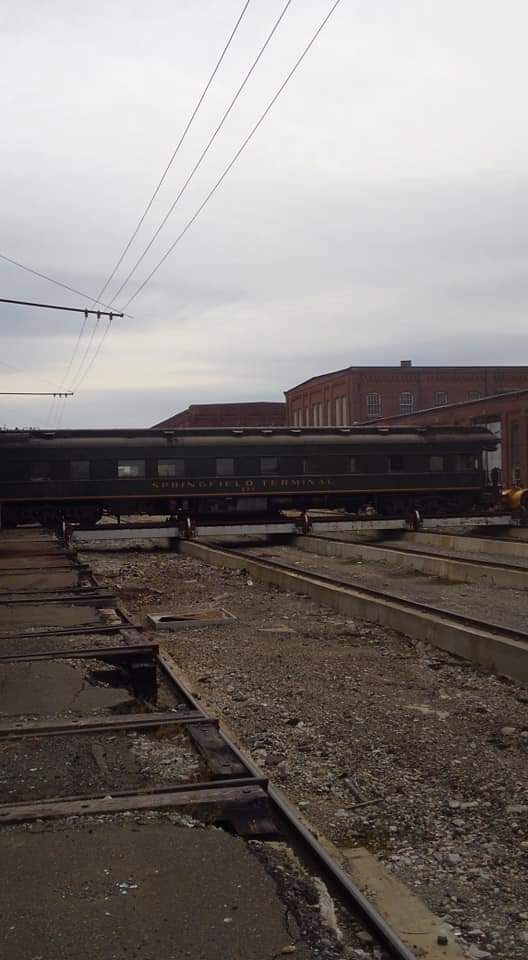 by ABurns
Tue Feb 09, 2021 12:13 pm
Here's another car that I don't believe is on the list. I found it on Facebook, photo credit to Sharon Barber. It's supposedly a Maine Central wooden coach in Phillips, slated to be scrapped. The roof caved in, among other things. as you can see. 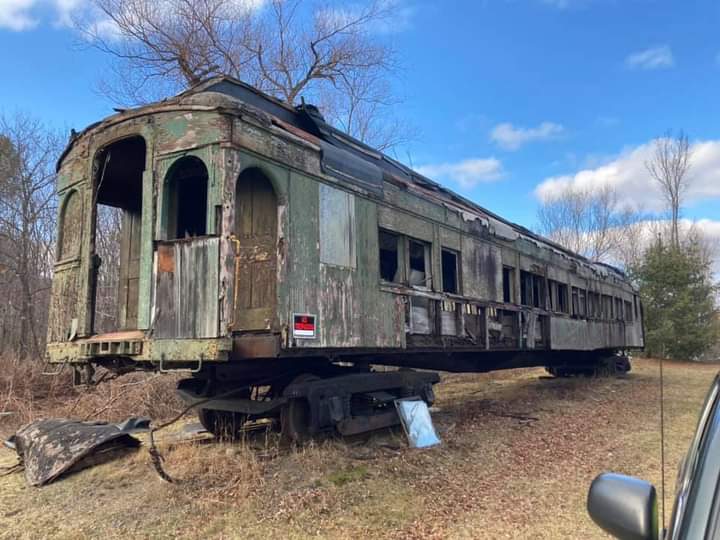 "In the beginning the Universe was created. This has made a lot of people very angry and has been widely regarded as a bad move." - Douglas Adams

"Farewell to MEC Coach - Part 1
The standard gauge Maine Central coach is showing its age in these photos taken on 27 December 2020. At this point everything of value to the Sandy River has been removed from the coach." 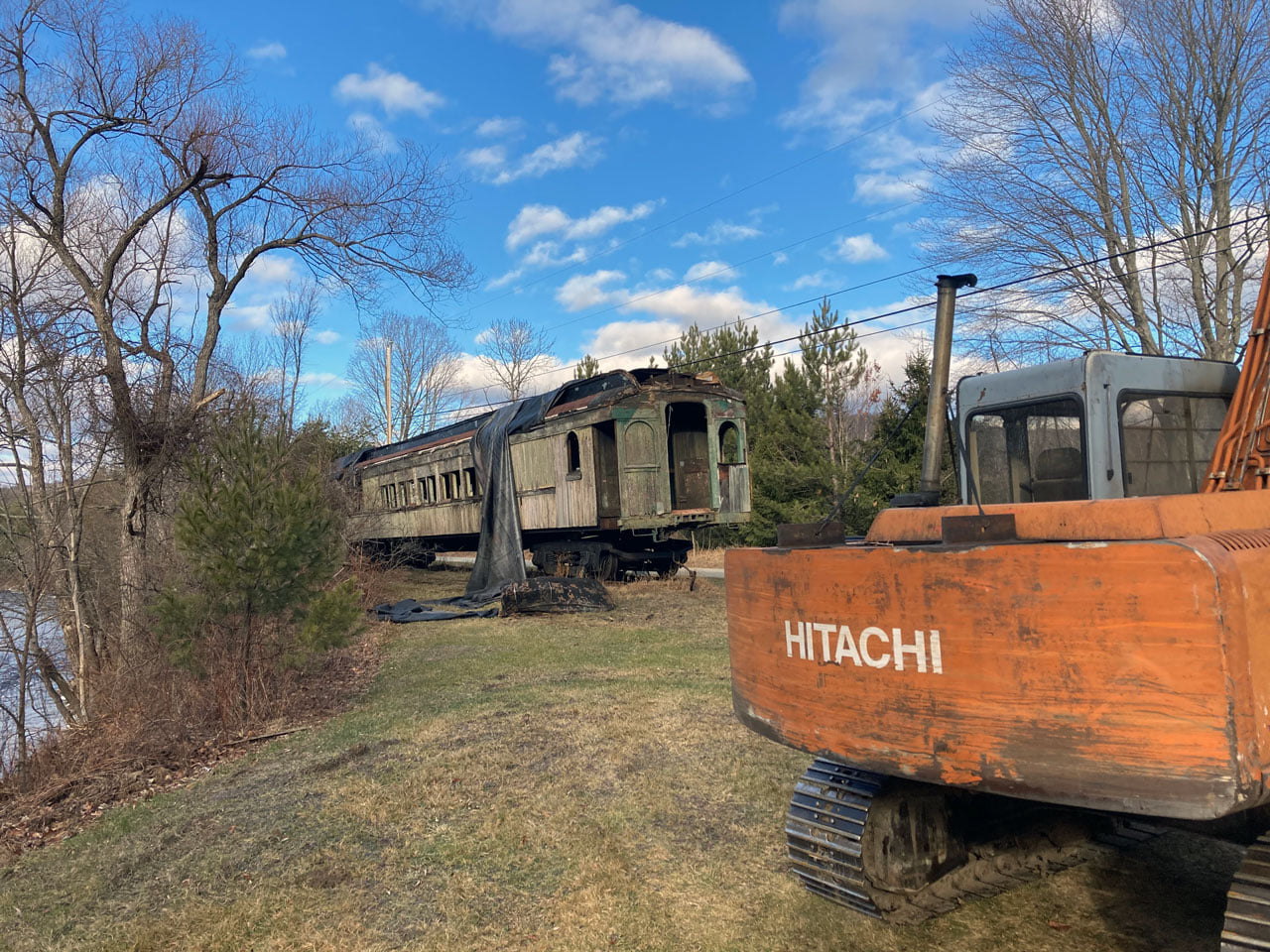 "Scrapping Maine Central Coach - Part 2
Here we are just a few days later with the weather looking more like you would expect for winter in Maine. Removal of this coach will add valuable parking area for our future operations." 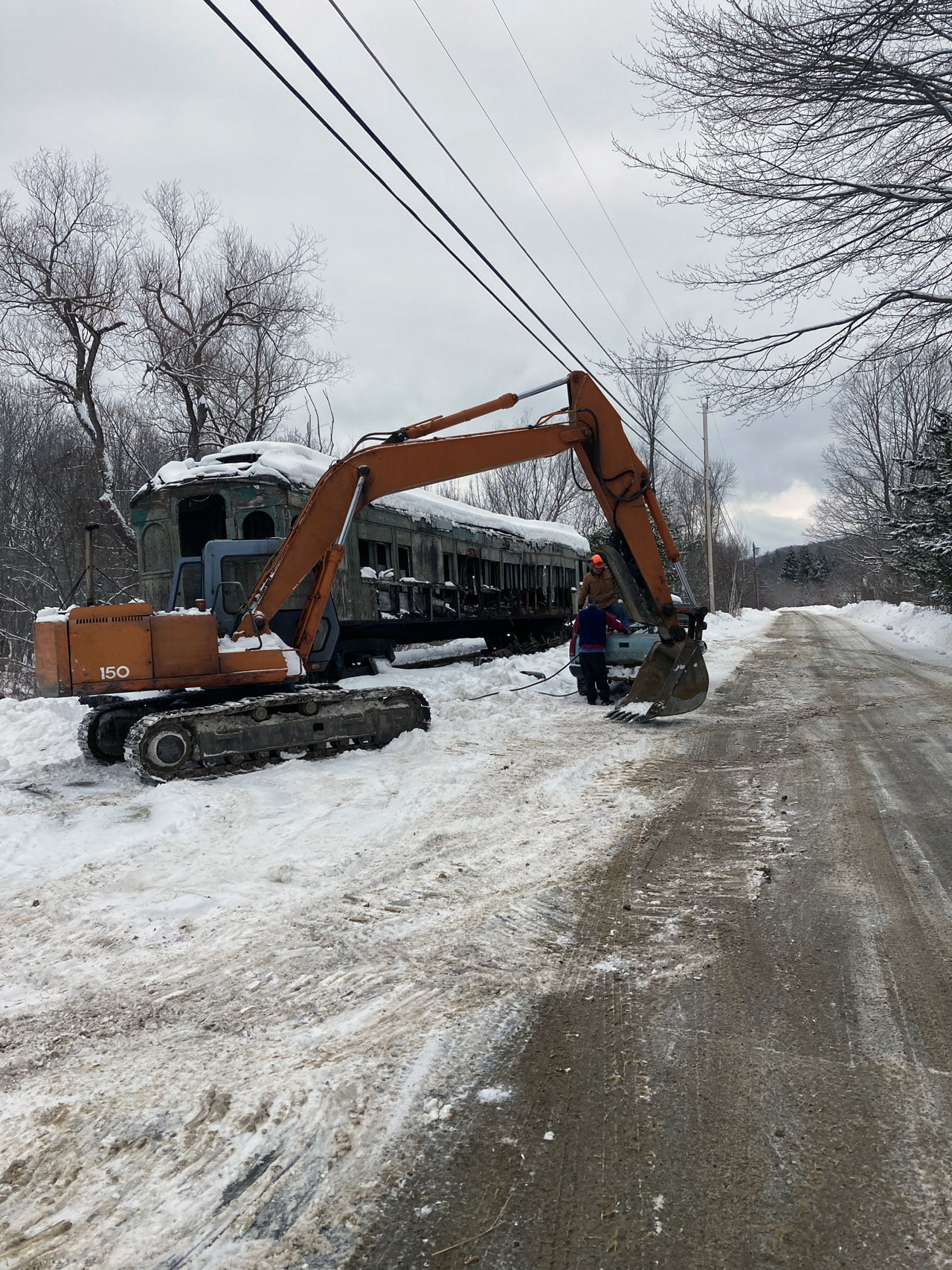 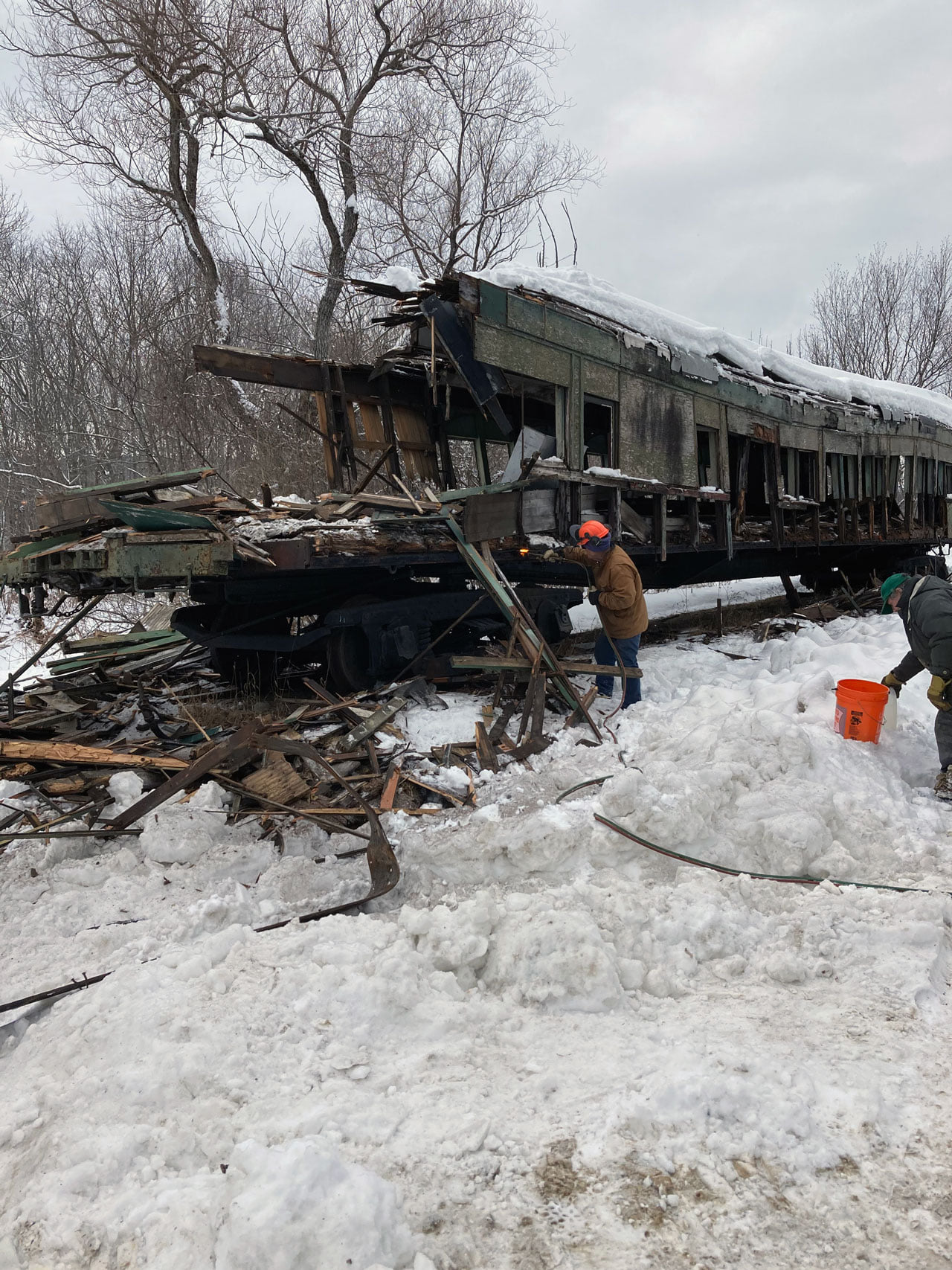 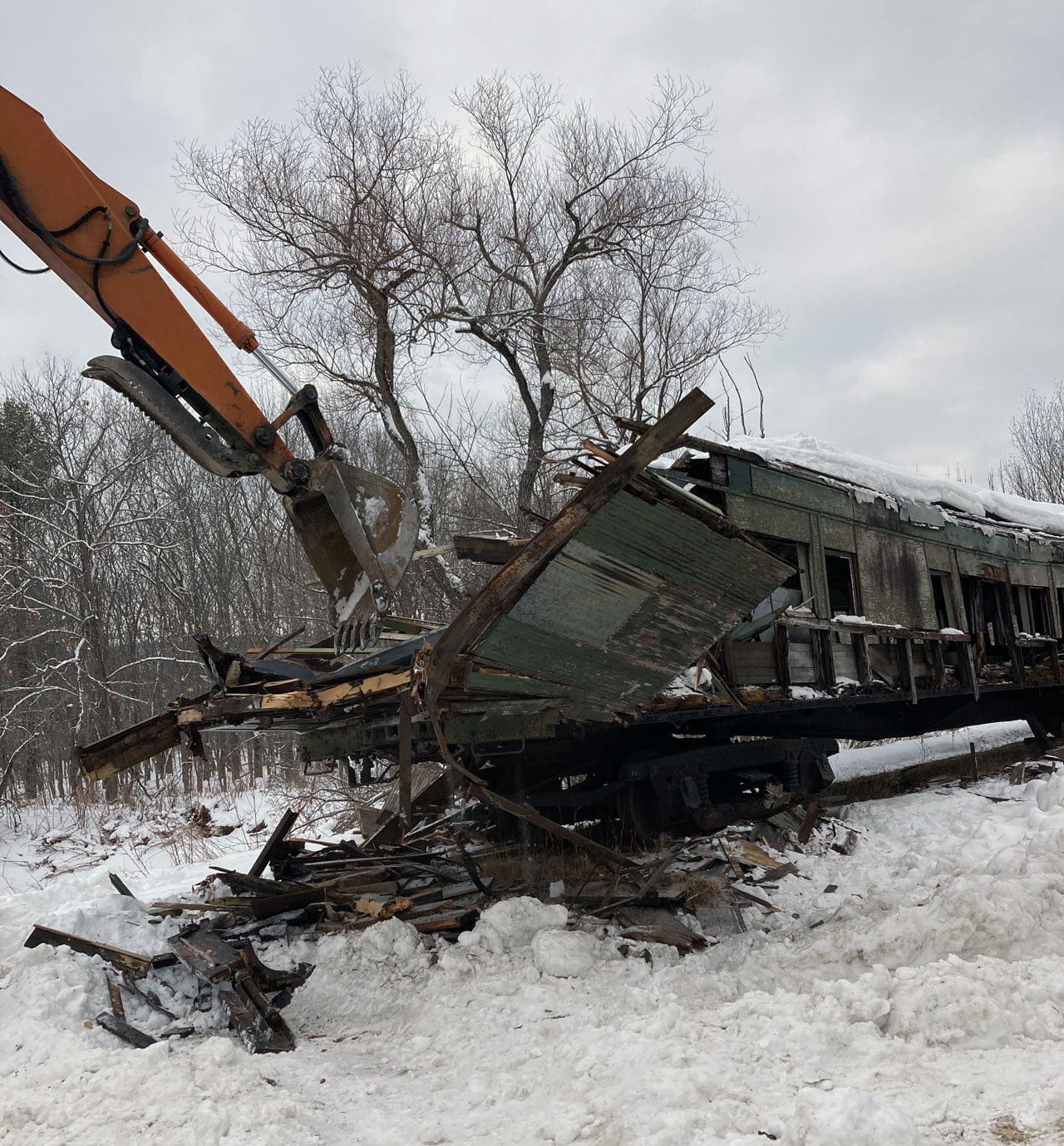 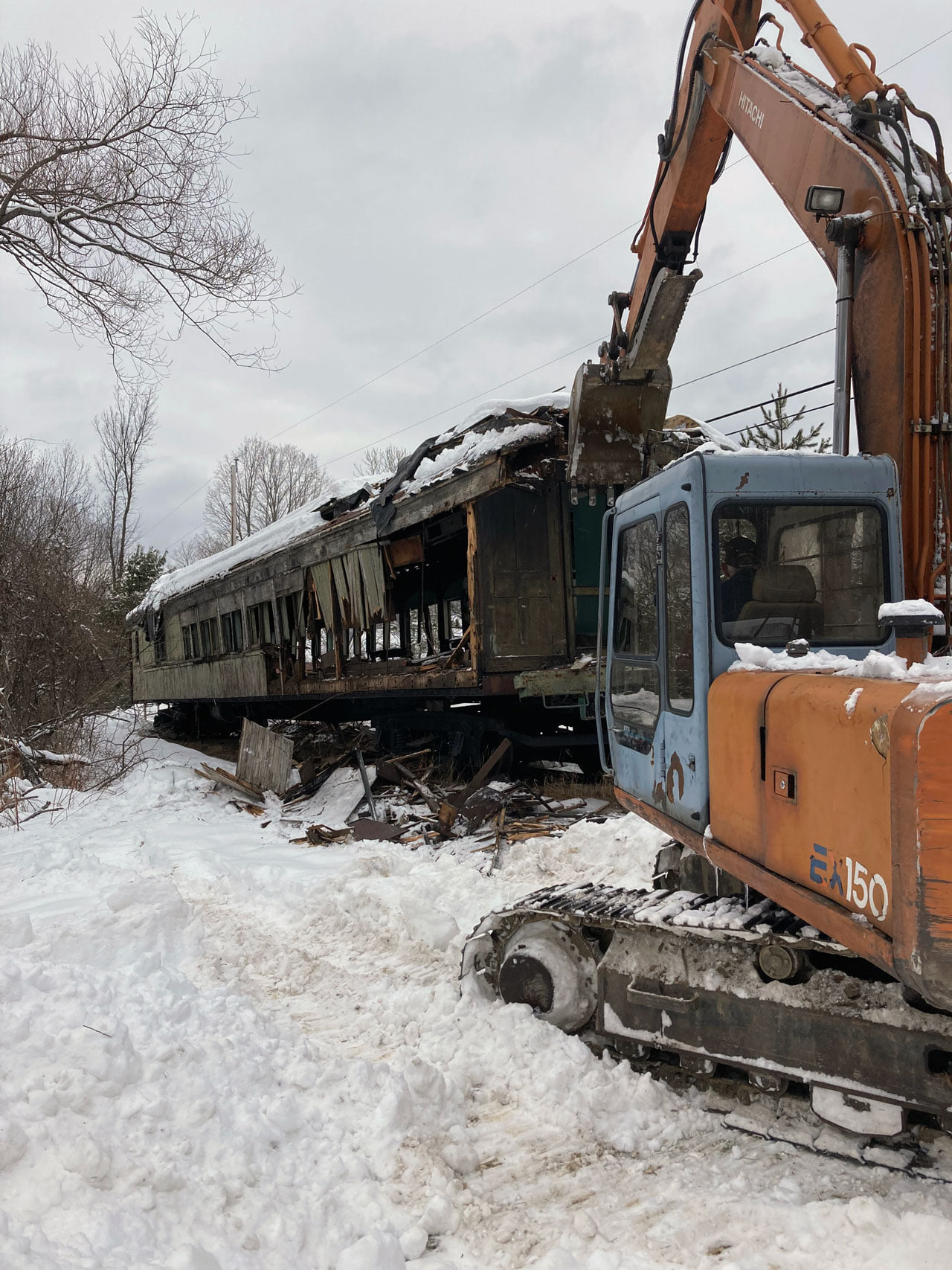 "In the beginning the Universe was created. This has made a lot of people very angry and has been widely regarded as a bad move." - Douglas Adams

by eustis22
Wed Apr 28, 2021 9:08 am
Speaking of the SR&RL, does anyone know if there was a narrow gauge following Rte 2 out of Farmington, North? On a recent drive between Farmington and Dexter, Maine, I could have sworn I saw a bridge abutment and roadbed at times paralleling Rte 2.I know the SR&RL followed Rte 27 to Kingfield, right? So it can't be that. Later I saw the Newport Dexter RR bed (now Moosehead Trails). But the Open Railways map shows me nothing between Farmington/Skowhegan.

by S1f3432
Wed Apr 28, 2021 8:39 pm
With the exception of the Maine Central mainline running more or less east-west all the other lines in the area
ran north off the MEC. SR&RL north out fo Farmington to Strong then to Philips or Kingfield. The Somerset RR
north out of Oakland to Madison, Bingham and eventually Kineo. The MEC Skowhegan Branch north from
Fairfield. The Harmony Branch north from Pittsfield and the Foxcroft Branch north from Newport. The only
two-footer east of the SR&RL was the Monson.
Greg S

by eustis22
Thu Apr 29, 2021 11:06 am
Crud. Well the other thread mentioned about a plan to lay rails north alonge the river so maybe this was a partial. I did not get a good glimpse of them but as there are two new craft breweries in Farmington I will go up again and try to get a picture.

by eustis22
Thu Apr 29, 2021 11:08 am
Crud. Well the other thread mentioned about a plan to lay rails north alonge the river so maybe this was a partial. I did not get a good glimpse of them but as there are two new craft breweries in Farmington I will go up again and try to get a picture.

by S1f3432
Thu Apr 29, 2021 11:59 am
It is possible that what you saw may have been the grade of the Franklin, Somerset & Kennebec, a proposed
connection between the SR&RL at Farmington and the WW&F in Waterville. Much of the line between Farmington
and New Sharon was graded and several bridges completed including one at New Sharon, the abutments of which are visible from Route 2. The line was backed by the owners of the WW&F an is documented in "Two Feet To Tidewater,
The Wiscasset, Waterville and Farmington Railway", Jones and Register, 1987, Pruett Publishing.
Greg S