Story of Red Arrow car #26 and the BVTA?

Story of Red Arrow car #26 and the BVTA?

by Montclaire
Tue Sep 16, 2008 10:05 pm
If anyone can fill me in, I am still in the dark as to how the Buckingham Valley Trolley Association met with so much resistance from the City of Philadelphia and was forced to close up shop, and the ensuing vandalism and arson of Red Arrow car #26, which I understand had been in fully operational condition. I found a pic of it charred to a crisp and was pretty outraged that something like that could be allowed to happen. What is the fate of car 26? The ECTM does not list it as rolling stock. If anyone has pics from when it was operational, please post. 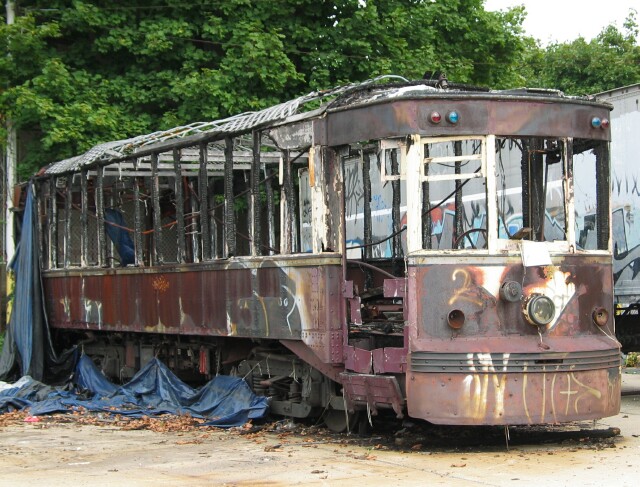 by walt
Thu Sep 25, 2008 10:03 pm
I can't add anything to this awful saga, but with the demise of this car, we've lost the only remaining example of the Hog Island Cars acquired by the PRT during WWI to serve the ship yard at Hog Island in SW Phila. There were originally 130 of the cars, which were the only MU surface cars ever operated in the City of Philadelphia, and were the heaviest cars ever operated in the city. They were designed to cram as many passengers as was possible into a car and, thus, were not very comfortable cars. Three of these cars were sold to the Red Arrow in 1942, after having been in dead storage during much of the 1930's-- PRT Nos 4024, 4045, and 4106 which became Nos 20-22 on the Red Arrow. The cars were re-numbered in 1949 when the St Louis Cars were placed into service becoming Nos 25-27 and were the only P&WCT/Red Arrow cars ever re-numbered. I believe that No 26's PRT number was 4106, but I'm not certain about this. Nos 25 & 27 were scrapped in April 1964. Though these cars were originally MU, by the time they were sold to the Red Arrow, the MU equipment had been removed ( by the PRT). The Ronald DeGraw book The Red Arrow has photos of these cars on the Red Arrow, and the Harold Cox book Surface Cars of Philadelphia 1911-1965 has an entire section on the Hogs including a photo of No 4106 just after it had been removed from storage to be shipped to 69th Street.
Please Move to the Rear and Speed Your Ride
( Philadelphia Transportation Company)