What was very interesting were the 19 empty boxcars and 4 empty BNSF covered hoppers. The boxcars were all ones that typically load at the Maine paper mills.

By the way, it is my understanding that they will be running again tonight.
Have a great day,
Fritz

by CN9634
Fri Aug 27, 2021 11:43 am
BNSF hoppers are coming out of Ardent in Ayer, MA with some 'borrowed' cars off the unit grain trains. Going up to somewhere in Quebec can't remember off hand.

I had hoped to catch this morning's 393 but slept in, but I did catch last night's SLQ eastbound 394, which arrived in Island Pond at 1933 with the following:

That's 45 cars total, including 41 loads and 4 empties. After spotting 7 loads at RCP and pulling 5 propane cars from one of the yard tracks, they headed east at 2020.
Have a great weekend,
Fritz

That's 28 cars total, all loads.
Have a great night,
Fritz

That's 54 cars total, including 41 loads and 13 empties. Apparently, there is quite a backlog of cars bound for the SLQ/SLR due to the CN collision in Prescott, Ontario last week.
Have a great day,
Fritz

The first was on September 3, when I caught 394 coming home from work in Lennoxville, so for old time's sake I went to the hill along Courval road near Waterville, QC, to watch it where I used to watch trains all the time (until I moved away 13 years ago). It had 3047-3004-3007 and 46 cars; only the last two units were running, in notch 8 heading into the grade. Picture below (it came through around 5 PM).

The second was on September 7 - the train Fritz reported above. I was out cycling and was passing through Sherbrooke, QC (near King St.) as it came through. There's a bike route parallel to the rail line on the opposite side of the St. Francis river, so instead of watching, I decided to race it to Lennoxville (about 4.5 miles). I ended up getting there 5 minutes ahead of it - credit the 10 mph speed limits at several urban road crossings.

The third was today. I was out cycling (again) this time with a cycling buddy, and we headed toward Waterville (from home in North Hatley) with the vague hope of catching 394. Sure enough, just as we approached Courval road we heard an approaching horn blast, so we waited for it to arrive a few minutes later (around 5:15 PM). It had 806-3806-3035 and 35 cars - short enough that it was only in notch 8 on the steepest part of the grade. Similar mix of cars to other recent trains (mainly loaded centerbeams, LPG and boxcars). I noted that 806 has a different horn than in the past - not sure when it was changed (haven't seen it often enough) but many years ago it had a K5LA with only 3 bells (missing 2 and 4). 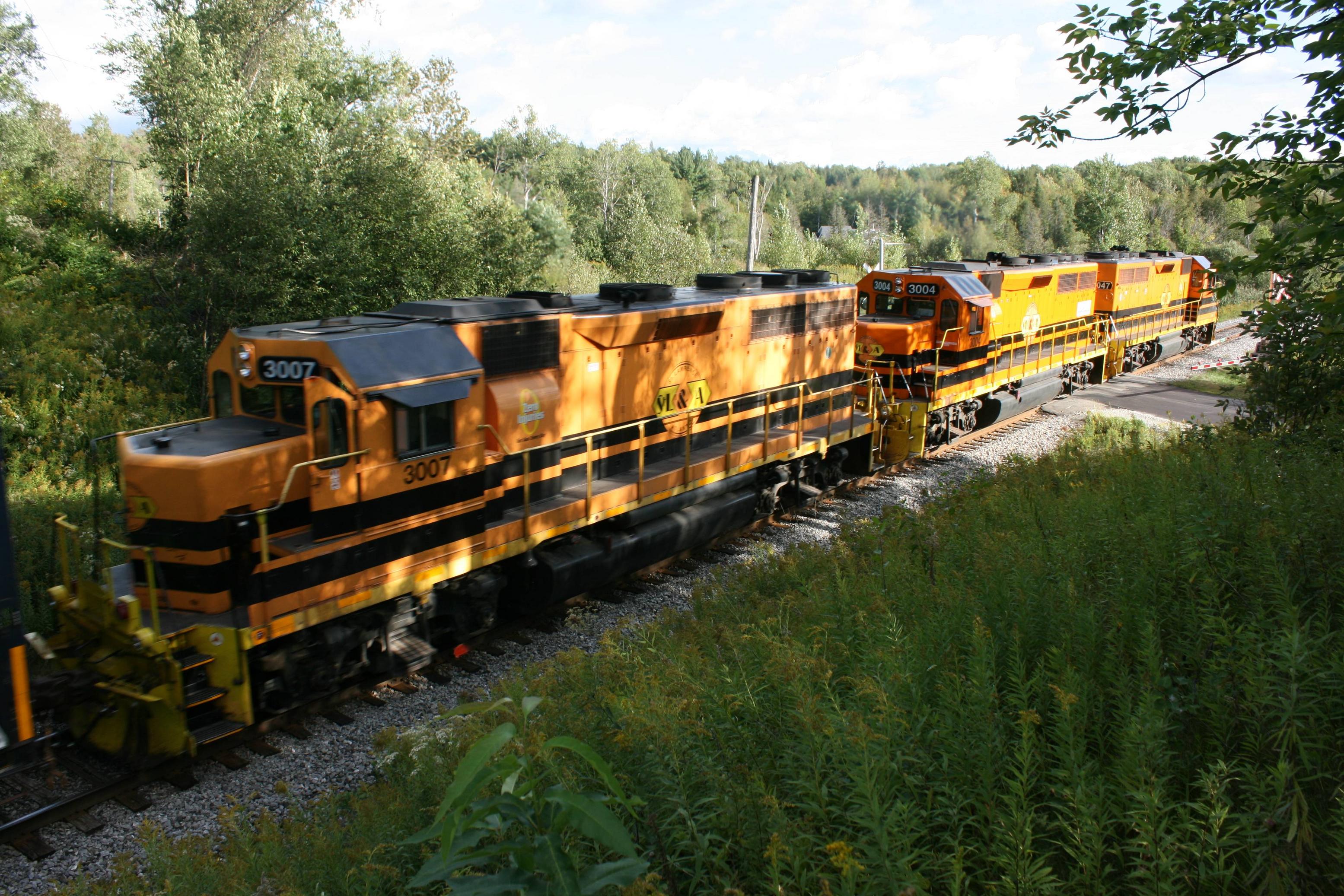 by CN9634
Sat Sep 11, 2021 1:02 pm
Thanks for the updates as always from north of the border. Not sure if you have any insight but I am curious if CP is upgrading the Diamond/signal system at Lennoxville as part of their CMQ refresh or not.

Last night's SLQ eastbound 394 arrived in Island Pond at 1929 with the following:

Today's SLQ westbound 393 departed the Pond at 0733 with the following:

I hope you enjoyed the beautiful day today!
Best,
Fritz

CN9634 wrote:Thanks for the updates as always from north of the border. Not sure if you have any insight but I am curious if CP is upgrading the Diamond/signal system at Lennoxville as part of their CMQ refresh or not.

I haven't noticed any changes, but then I haven't recently gone near the signals to check them out. I'll try to remember next time I'm in Lennoxville (which is all the time).

It does seem there's still a fair amount of interchange traffic with the SLR (as there was when CMQ owned the line). Lots of cars in both Sherbrooke yards whenever I go by, and both roads use two (sometimes three) units when switching (MMA only ever used a single unit). CP has also been upgrading the mainline with new tie plates and welded rail.
--Michael Eby
--http://trainiax.net

by Fritz
Fri Sep 17, 2021 7:43 am
Hello,
It is my understanding that CP delivers to SLQ at Sherbrooke three days per week (Monday, Wednesday, and Friday). That is why Saturday morning's SLQ 393 usually stops there to pick up cars.

Last night's SLQ eastbound 394 arrived in Island Pond around 2105 with the following:

I am hearing that the 393/394 will go back to four nights per week (M Tu Th F) starting week after next.
Have a great day,
Fritz

Last night's SLQ eastbound 394 arrived in Island Pond at 1947 with the following:

That's 46 cars total, all loads.
Have a great day,
Fritz

That's 51 cars total, including 3 empties and 48 loads. Of special interest were a BN green covered hopper and a CNW boxcar.

Starting Monday, they will be operating four nights per week again (Monday, Tuesday, Thursday, and Friday).
Have a great weekend,
Fritz