by Timmerg
Mon Oct 20, 2008 3:12 pm
Driving up 101 in northern California recently, I noticed a rail line following the road. It appeared to be abandoned. Are there any plans to convert this line? It would be a great draw to Humboldt and Mendocino counties.

Re: Rail line in Northern California?

by Alloy
Mon Oct 20, 2008 11:46 pm
It was the Northwestern Pacific Railroad, a regional road that ran from the North Bay at Tiburon to Eureka, California.

There have been at least two ballot attempts to restore commuter service on the southern portion of this line, from San Rafael to Santa Rosa, and both have failed. I believe there was talk of a third attempt
Farrell Wills

The new Oakland Airport Connector, which has drawn passionate supporters and opponents alike, moved another step closer to reality Thursday, after BART directors approved a controversial new funding plan for the project.

The controversy is on how well the funding can be pulled off - parts of it may fall through.

BART - Oakland Airport Connector claims that construction work could start as soon as late this year and be finished on 2014.

But the North Bay is getting a new rail-transit system, SMART - Sonoma Marin Area Rail Transit - Home Page. It will run between the Larkspur Ferry Terminal and Cloverdale on the former Northwestern Pacific tracks, and it will use Diesel Multiple Unit rolling stock (What is SMART?).

Work being done by Caltrans as part of Highway 101 widening

The first tracks of a railroad line that someday will carry commuters in Sonoma and Marin counties are being laid near San Rafael.

However, it also has potential funding problems - a gap of $155 million in committed funds so far. But if they get that money before long, they should be able to start service around 2014.

by kaitoku
Sun Oct 24, 2010 10:37 pm
Final negotiations for the SMART dmus will wrap up next month between authorities and Sumitomo/Nippon Sharyo. From the PressDemocrat:


SMART is planning to send some board members and staff to Japan, where Sumitomo runs a very similar train between Nagoya and Takayama. The trip will take place before the board makes a final decision Nov. 10.
“We are sensitive to spending money on a trip like this when we are looking at a deficit,” SMART spokesman Chris Coursey said. “This is $60 million for what will be the signature piece of equipment for the system. We want to know what we are getting.”

Something like this, I suppose (JR Tokai KIHA 85 limited express DMU):

*I suspect the final look will be considerably different, at least in proportions, as the basic design will have to be bulked up to meet FRA guidelines and modified for low platform loading.

Plant Being Built for Bay Area Rail Cars in Illinois

Nippon Sharyo just got the contract to build some DMU trainsets for the new commuter line in Marin (SF Bay Area--Novato San Rafael area-old Northwestern Pacific Line) which trainsets will be partly built in Japan then finished in Rochelle to comply with built in USA specs.

by electricron
Wed Apr 20, 2011 11:47 pm
SMART originally ordered 18 Nippon Sharyo Sumitomo DMUs, enough for 9 married-pairs last year for $56.8 million. Since then, the length of the initial operating segment of the railroad they plan to build has shrunk approximately by half. Therefore, because Toronto also ordered 12 "options" off the SMART's order, SMART could order less without penalty, which they did last week. Now, SMART is only ordering 12 DMUs, enough for 6 married-pairs, with a savings of slightly more than $17 million. Now they are spending just $39 million for DMUs.
http://www.sonomamarintrain.org/userfil ... packet.pdf
SMART's DMUs 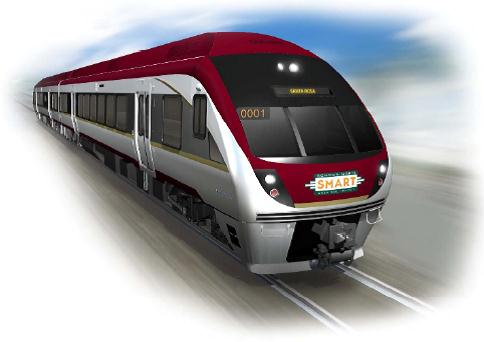 by kaitoku
Tue Apr 26, 2011 9:22 am
"Since then, the length of the initial operating segment of the railroad they plan to build has shrunk approximately by half."

kaitoku wrote:"Since then, the length of the initial operating segment of the railroad they plan to build has shrunk approximately by half."

To be fair, SMART works under a far more restricted budget than the State of California or the United States. It appears all but $35 Million of a $400 to $700 Million project is being financed from a quarter cent sales tax. If the local economy falters slightly, so does SMART's tax revenues. SMART doesn't have the power to print paper money.

Note I wrote initial operating segment earlier. They still hope to build the entire rail and bike corridor, but it's to be done in steps now, not all at once.

Re: Oakland Airport and North Bay - Moving Ahead

BART’s Oakland Airport Connector project under budget | Will Reisman | Bay Area | San Francisco Examiner
By less than 1%, it must be said. However, they are still shooting for an opening date of Spring 2014.

Checking on "Construction Updates" at the project's home page, BART - Oakland Airport Connector, it is now under construction. with utility relocation and pile driving for the foundations.

SMART train 'on track,' but costs rise and start likely to be delayed - Marin Independent Journal

It's going to take more time — and $45 million more than estimated last year — to get the controversial SMART train rolling, but the rail project is "balanced and funded," a top official reported Friday.

I checked that, and also SMART - Sonoma Marin Area Rail Transit - Home Page, and I could find nothing on what construction, if any, has now been done.

The full SMART board is scheduled to approve the contract next week, SMART officials said in a prepared statement.

by electricron
Wed Feb 01, 2012 1:12 pm
I couldn't believe I couldn't find a thread here about SMART, hence why I'm starting this new thread.
SMART opponents fall short in repeal effort.
http://www.marinij.com/marinnews/ci_19852757
SMART tells north Sonoma County train fans to keep the faith
http://www.pressdemocrat.com/article/20 ... -the-faith
For those unfamiliar with SMART, I suggest visiting Wiki.
http://en.wikipedia.org/wiki/Sonoma-Mar ... il_Transit
Briefly in my own words, SMART will be a commuter rail line between Larkspur and Cloverdale, running on historic Northwest Pacific corridor closely paralleling US Highway 101. They will be sharing the tracks with freight operator North Coast Railroad Authority (NCRA) and sharing much of the corridor with a biking-hiking trail.
It's being financed mostly from a quarter cent sales tax from Sonoma and Marin counties, plus fares and other small grants it can find.
They will be operating FRA compliant DMU married-pairs assembled in an Illinois plant by Nippon Sharyo and Sumitomo. They have ordered 6 married-pairs for initial operations.

Because sales tax revenues are down, the initial operating segment will not reach all 70 miles from Larkspur to Cloverdale, it'll only reach 38.5 miles from Downtown San Rafael to north Santa Rosa at Guerneville Road. Train headways will initially be approximately 30 minutes apart during peak travel hours, with no trains operating mid-day or after the evening peak.
Besides updating and upgrading the rail infrastructure on the once abandoned rail corridor, the most limiting operation feature will be the downtown San Rafael street layout, which will limit the length of the trains to less than 300 feet (SMART DMU: Married-Pair = 170 ft.; Triplet = 255 ft.). This limits the trains to three cars, 156 passengers for a married-pair, and ~234 passengers for a triplet.

by mtuandrew
Wed Feb 01, 2012 3:19 pm
Moderator's Note: electricron, there is actually a thread about SMART in the California Commuter & Transit subforum. I'm moving this thread there, and will ask Jeff Smith or Mr. Borokhov to merge this post into that thread.

Personally, I'm very interested in seeing the performance of the Sumitomo/NipponSharyo trainsets. They potentially fill a niche that the Stadler units partly fill, but in regards to FRA compliance hasn't truly been filled since the RDCs.
Moderator: General Discussion: Passenger Rail,
DC-MD-VA Passenger Rail and Amtrak

Personally, I'm very interested in seeing the performance of the Sumitomo/NipponSharyo trainsets.

by electricron
Wed Feb 15, 2012 4:56 pm
SMART plans to buy bascule bridge near Galveston instead of refurbishing swing bridge over Petaluma River.
http://www.pressdemocrat.com/article/20 ... ?p=1&tc=pg
For the same amount of money, SMART ends up with a bridge with 80 years of life left instead of 20. The bascule bridge operates (opens or closes) within 90 seconds instead of 150 to 180 seconds. Also, it'll allow the river channel to be wider, making it safer for boating. It'll be interesting to see if the SMART board fast tracks the purchase.


The commuter rail cars that will run between Sonoma and Marin counties have passed federal crash tests, are in the final design stages and are on track to be delivered in October 2013.

“This is the state of the art for commuter rail, which shares the track with freight railroads,” said Kevin Koyasu, president and chief executive officer of Nippon Sharyo USA, based in Arlington Heights, Ill.

A stainless-steel prototype of the SMART car was built at the company's plant in Japan, where it passed compression tests for crashworthiness, Koyasu said.

The car shells will be built in Japan and then shipped to the Illinois plant for assembly, largely with American-made components, including a Cummings diesel engine, brakes, seats and windows.