by TheChessieCatLives
Sun Jan 25, 2015 9:00 pm
Caught this guy coming through on an eastbound grain train yesterday. 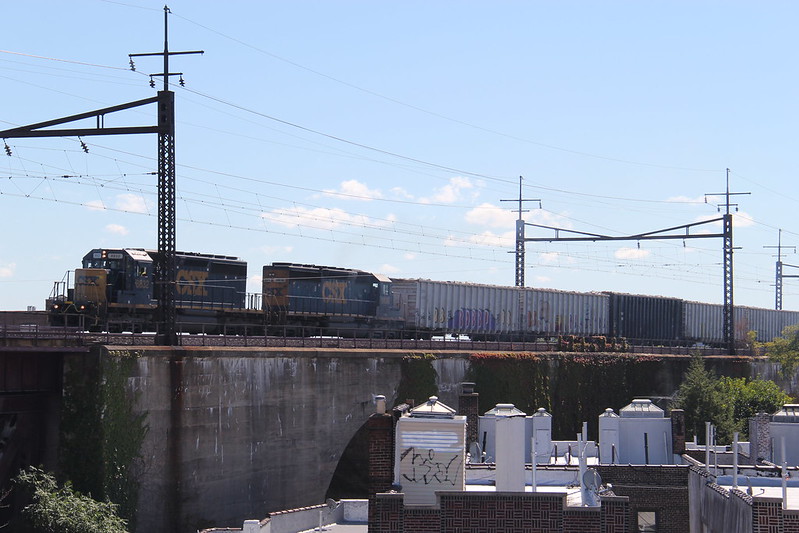 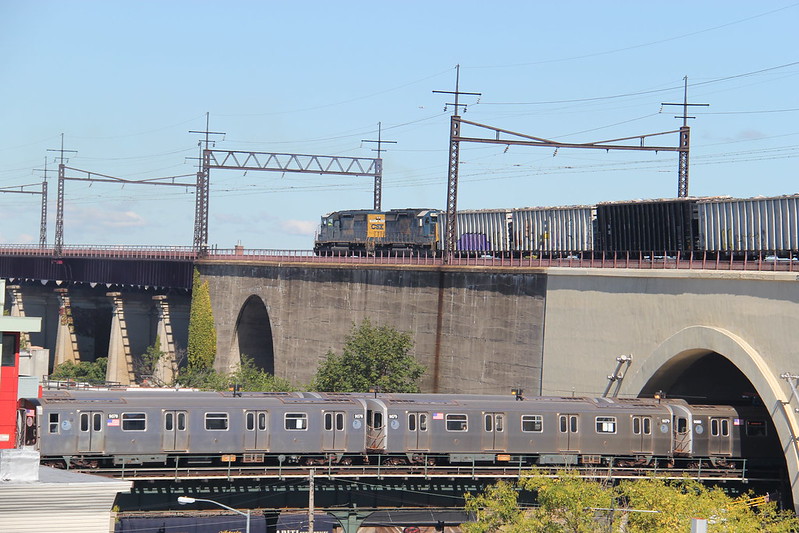 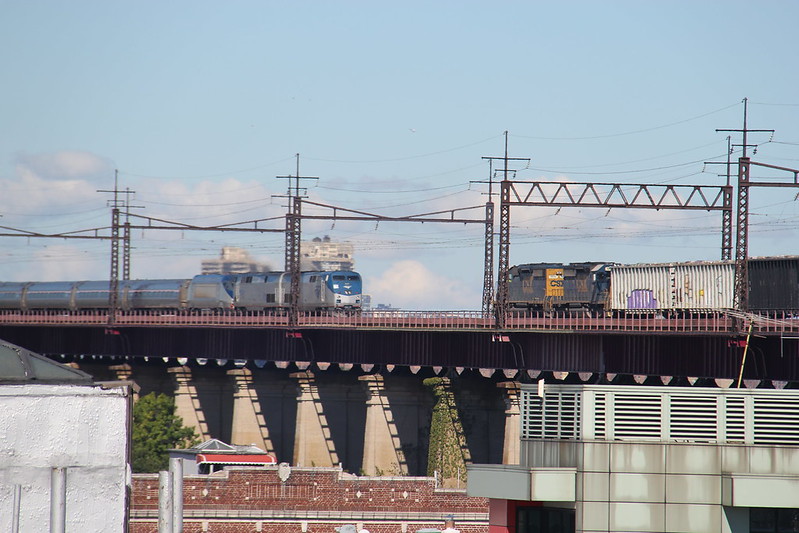 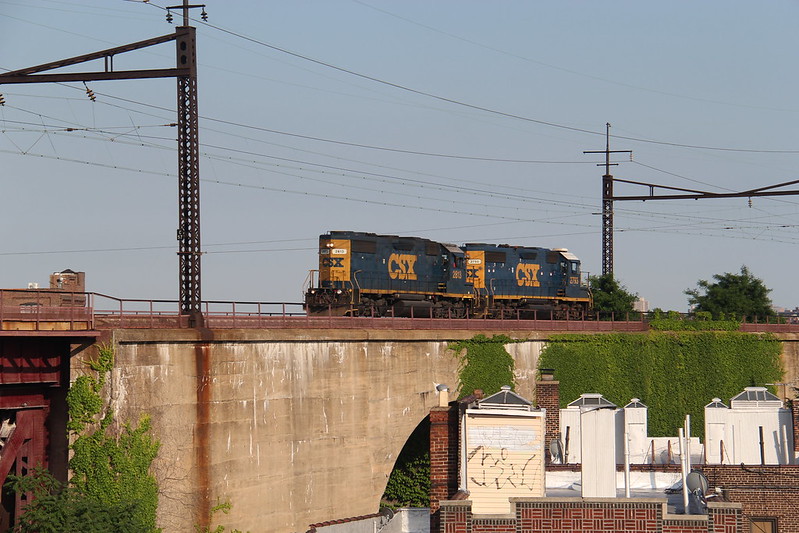 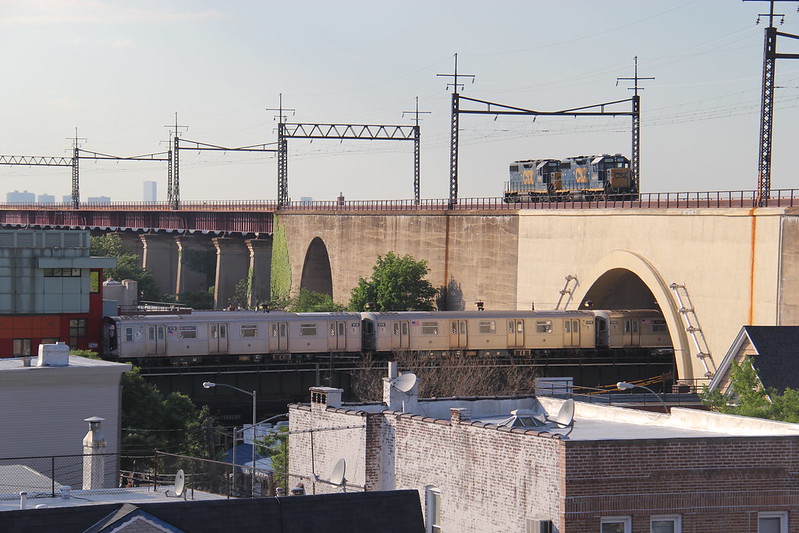 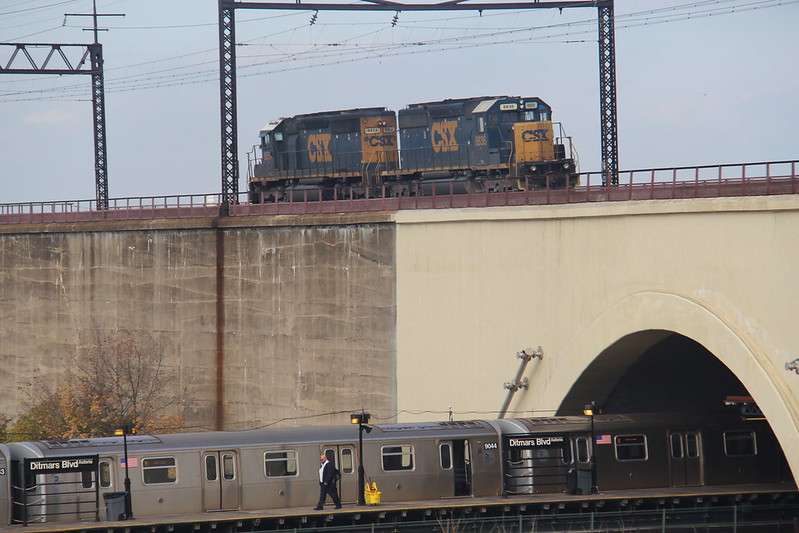 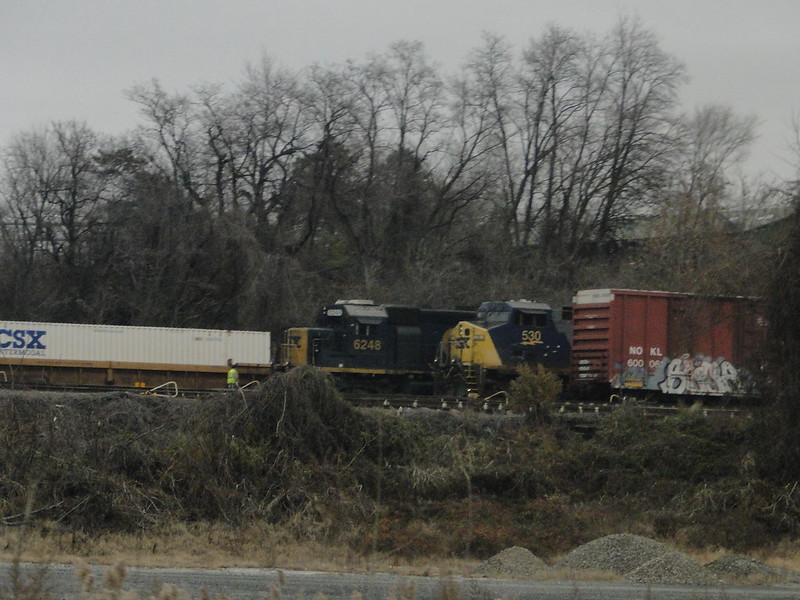 by Jeff Smith
Mon Feb 09, 2015 3:58 pm
Wow those are incredible shots! Have to get out there sometime....
Next stop, Willoughby
~el Jefe ("Jeff Smith Rules") :: RAILROAD.NET Site Administrator/Co-Owner

Sorry for the cluster of links. I am not sure how to make them less than 800 pixels and keep them at full quality in the photobucket library.

COP_CSX-ROW_at_Kitredge-Pl_n_Hud-line_MNRR-nrth-rail-yrd_HL-siding_last-trk-section_WA_400X300.jpg
Here in the City and town of Poughkeepsie,property abandonment is taken to a grand scale.The largest of the abandoned properties would have to be the old Hudson River Psych Center (HRPC) main facility on US rt 9. This has been owned by Hudson Heritage Development since 2003. The main facility included the original,historic, 1888 psych hospital. The south wing got struck by lighning in 2008?? and was destroyed. So much for preserving the heitage.As of 2015,there has been no development. So much for development.This facilityis quite large,and goes from US rt9 to SR 9G.The secondary facility on the, other side of SR 9G,off Cotage Rd has been closed by the state. The combined properties would be almost the size of Beacon.

The other large,relatively small in comparison,property abandonment in the town of Poughkeepsie is the large industrial complex on Fariview Ave.Only a smal portion of this industrial complex,that was once home to the old Shatz ball bearing company (Shatz 1.0), is in use.Most notably is Sarjo's at nmbr. 70 Fairview Ave. Shatz reorganized in 1985 (Shatz 2.0) and built a NEW facility at nmbr. 10 Fairview Ave.Shortly after,a textile company moved into this complex at 64-68 Fairview Ave.The main industrial (and hospitals - see below) siding passed behind this copmplex and no doubt served the various industries in this complex over the years.

and... the other large property abandonment is the remaining CSX ROWs in the City and town of Poughkeepsie.

I use the term 'remaining' because when the Walkway Over The Hudson was created,a 1/4 mi. aproximate section of the Maybrook line ROW (approach to the actual bridge) and a section of a siding from Parker Ave. was acquired by the Walkway organization.The Maybrook main line from the east end of the Walkway property to Morgan Lake was still owned by CSX at the time. In 2006,when Dutchess County was in the planing stage for the Dutchess RT,the county tried to get this section of the ROW via 'eminent domain'. Aparently CSX had better lawyers,and so the county and was not able to acquire this part of the ROW ccat the time and so the original plans for the RT only went from Hopewell Jct. to Morgan Lake.

In 2012,through much negotiation,and help from Senator Chuck Schumer (and some money from the Dyson Foundation) this section of the ROW was acquired by the Walkway organization and almost imediately turned over to the county to become the 'missing link' of the Dutchess RT.In 2013,stage 5 (the 'missing link') and stage 4 (the new bridge over rt 55) construction began. The completed RT was opened 10-10-2013. In November of that year,the rail trail was dedicated to the former county exec William R Steinnhaus in a second grand opening ceremony.

Today we now have the Maybrook Line rail corridor trailway system - the WRS DRT,the WOTH state park and the Hudson Valley RT (the western extension to the Walkway opend Oct.,2010) 18+ miles from HJ 0.0 to the Tony Williams town of Lloyd park in Ulster county.

A while ago I came across the trainweb.org WAPO-10 page describing in photos and text 1994 Conrail operations in the city and town of Poughkepsie.Great stuff! The photos on this page will serve as the 'before' photos. http://www.trainweb.org/locollection/WAPO10.html

I have to take issue with some of the terminology and nomenclature used in the above web page. First of all the reference to the rail yard on the Hudson Line as the 'CNE yard' CNE? everyone,most especialy railroders should know that the Hudson Line is the teritory of the once mighty New York Central RR. The old,much biger way back when,rail yard in Hopewell Jct. could be refered to as the 'CNE yard' as it WAS,way back when.Second, is the nomenclature of the sidings. The siding,with the grade,going UP from the Hudson Line junctioned with the main industrial siding. It is THIS siding that terminated at the STATE hospital (HRPC) However,this main siding also went behind the PRIVATE hospital as well (St. Francis - now known as Mid Hudson Regional Hospital/Westchester Med Center) this hospital has a power plant separate from the actual hospital like HRPC. Way back when, everything was coal fueled (including the locomotives) I am sure there must have been a stub siding from this main siding to serve the St Francis Hospital power plant as well, and so my siding nomenclature for the main siding is: main industrial (and hospitals) siding and the track from the Hudson Line to the main siding: Hudson line siding.

A couple of weeks ago,I was riding on Hamilton Ave. in the city of Poghkeepsie.At the CSX ROW crossing,on the east side I had noticed there had been some clearing. I did not have my camera and so I returned the next day to take some photos.I had realized this time of the year would be a great time to take pictures of an abandoned RR ROW.There is litle vegitation,so one can actualy (almost) see the ROW.Over the next few days I would take more photos of the CSX ROW at the
various at-grade crossings.One thing I had noticed over the past few years is the disappearance of the plastic pipe and wire rope barriers.I had thought there was one at Parker Ave. and one at Hamilton Ave.

When I was taking photos last year at the Smith St. yard-intermodal area,I had seen there is a private no trespassing sign IE: NOT CSX.I took a photo of this sign and of the recent activity at the end of the yard during my recent photography outing.

I created a special folder,with sub-folders,on my MS One Drive and uploaded all of the new photos,and some previous photos,to this special folder.I added captions to the pictures.

NOTE: click on first pic in sub-folder to begin slide show with enlarged sized pics - if the caption is truncated click on the i icon to read the full caption text
You do not have the required permissions to view the files attached to this post.

The L&N 'sticker' unit (CSX 323) led Q389 on the CSX Trenton Subdivision, along with three other engines today.

http://www.enterprisenews.com/news/2017 ... ridgewater" onclick="window.open(this.href);return false;
Running on Empty all these years..........

by bostontrainguy
Wed Oct 04, 2017 9:10 am
IMAG2561.jpg
Saw these signals on the S line just north of Wildwood, FL (southbound). I have never seen signals arranged like this. Obviously if a train is on the right track, it would block the view of the signal of the train on the left track.

This just doesn't make sense to me. Any ideas?


[/attachment]IMAG2561.jpg[attachment=2]
You do not have the required permissions to view the files attached to this post.

by mmi16
Wed Oct 04, 2017 6:37 pm
Signals appear to be at the end of a passing siding with a road crossing just beyond the signals. The siding is the track on the right. A train that is ON the siding will be stopped short of the signal and the Left signal will be visible to a train operating on the Main. If the train on the Siding has the signal to proceed from the siding they will be blocking the main and a train on the main will have to stop short of the road crossing.

Crews are REQUIRED to KNOW the physical characteristics of the territory they operate on and will know the quirks of this location.
Never too old to have a happy childhood!

by Kurt
Fri Dec 29, 2017 2:20 am
Passing the Union Station in Chatham, NY. The switch under the second locomotive leads to the former NYC Harlem Division to Grand Central Terminal.
You do not have the required permissions to view the files attached to this post.

by bostontrainguy
Mon Jan 15, 2018 5:42 pm
Regarding the placement of both signals on the right side of the ROW, I just found out that this was a common practice by the Seaboard so these are inherited signals. Apparently they were not just put at the end of a siding as shown but were common even on long double track segments. 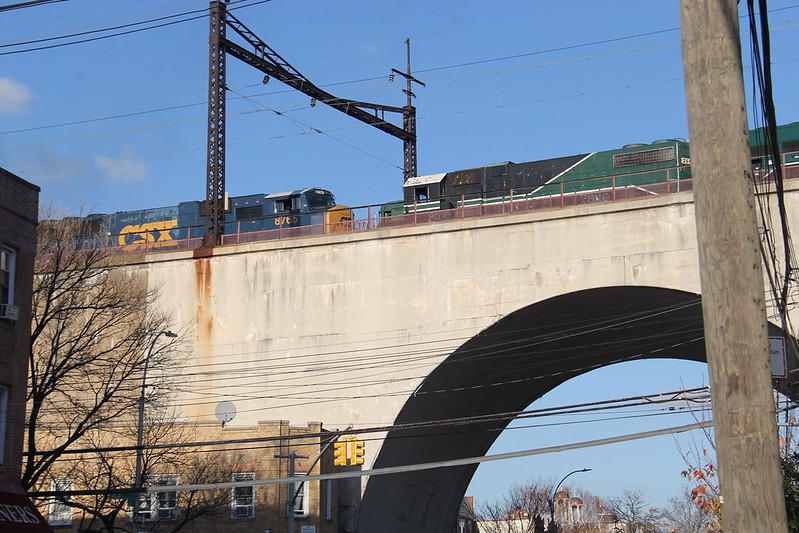 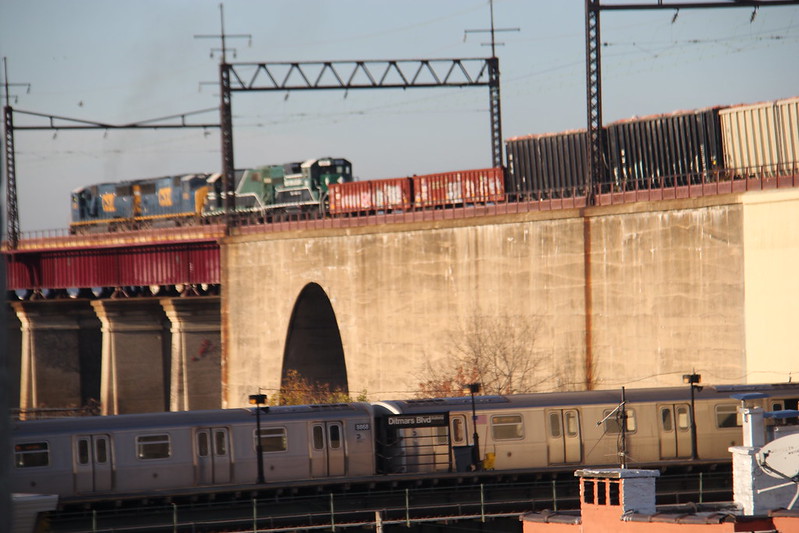 bostontrainguy wrote:Regarding the placement of both signals on the right side of the ROW, I just found out that this was a common practice by the Seaboard so these are inherited signals. Apparently they were not just put at the end of a siding as shown but were common even on long double track segments.

by bostontrainguy
Sun Feb 25, 2018 10:14 pm
SCL Signals.jpg
Just the opposite. The left track is the main. I live a short distance away and see how they run though the area. Also the signal types clearly identify the main and siding.

The reason I find this interesting is that I have recently learnt that SCL regularly practiced this signal placement - both signals on the same side. The above picture shows a double track mainline with signals placed just like those shown. My concern is that a train on the right track would block the signal from a train on the left track. This just seems like a strange and dangerous practice to me.
You do not have the required permissions to view the files attached to this post.