by gprimr1
Wed Jul 09, 2008 6:06 pm
I spent the week in the California watching countless stack trains and two questions keep bugging me:

1.) What keeps the top container on double stacks from just falling off on turns?

2.) When you have a small container and a big container, why do they put the big one on top of the small one?
-Greg Primrose
Co-Owner, Railroad.Net
Ave Atque Vale

by UPRR engineer
Wed Jul 09, 2008 11:11 pm
Tryed to find ya a picture of one with no luck, after a few searches i found that intermodal interbox connectors was the technical term used for the "pins" that hold them together. I saw one laying by the track, ill try to get a picture of it next time im out that way.

by UPRR engineer
Wed Jul 09, 2008 11:13 pm
OOOP there ya a go. These ones look like there a bit more jazzed up then the ones ive saw. Heres the link: http://www.peckhale.com/Intermodal242.php

I'll still try to get a pic of the more common ones in use.

by gprimr1
Thu Jul 10, 2008 12:55 am
Thanks, I thought there might be some kind of lock, but when you see tv programs they just load the containers and high ball, they don't show the pins securing.

by DutchRailnut
Thu Jul 10, 2008 7:52 am
No the containers have to be manually secured http://www.cmncomponents.com/ibc.htm.
Only on the trailer frames that are used within port are containers only held by gravity on pins without locks.
If Conductors are in charge, why are they promoted to be Engineer???

by UPRR engineer
Thu Jul 10, 2008 9:57 am
(If you think we never loose any) There use to be a guy here who worked in a port, he said they fall off the ships at sea quite a bit, also one did come off here a while back in a curve, dumped her off in the sage brush. Sometimes on a train you can see where theres a few of the connectors that havent been locked into place, you'll see the lever hanging out to the side.

by David Benton
Thu Jul 10, 2008 3:11 pm
Floating containers are quite a hazard to small boats in the pacific island area . I'm not sure if they lock all of them together on ships or not , that would be quite a job . we call them twistlocks .
Moderator worldwide railfan , Rail travel & trip reports
The only train trips I regret are the ones I didn't take.

by DutchRailnut
Thu Jul 10, 2008 4:38 pm
Yes on ships they use twist locks and lashings to keep thm on deck you would be surprised at what a rough sea can do to a stack of containers. 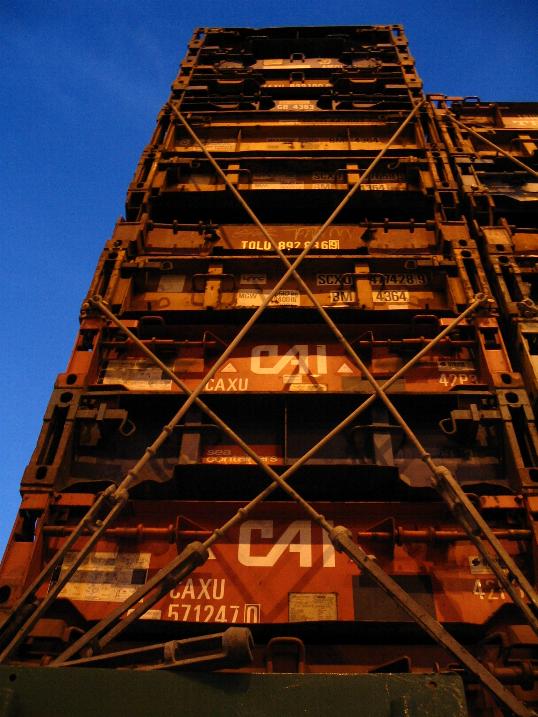 when not properly lashed this happens.

Last edited by DutchRailnut on Thu Jul 10, 2008 5:13 pm, edited 2 times in total.
If Conductors are in charge, why are they promoted to be Engineer???

by David Benton
Fri Jul 11, 2008 3:40 pm
wow , those twistlocls hold on . i saw some container stacks in the port that had blown a container of the top , so thought they wernt locked . must be quite a job to lock / unlock them .
Moderator worldwide railfan , Rail travel & trip reports
The only train trips I regret are the ones I didn't take.

by GOLDEN-ARM
Fri Jul 11, 2008 11:36 pm
Thanks westr for those links. There's some really awesome stuff in there. One ship lost over 650 containers in a single accident!!! Hard to imagine the claims of losing 10,000 containers a year overboard. The oceans must be littered with them.........

DutchRailnut wrote:Yes on ships they use twist locks and lashings to keep thm on deck you would be surprised at what a rough sea can do to a stack of containers.

when not properly lashed this happens.

I'll have to look for that next time a ship comes up the chessapeke bay!

A slight correction to this post (that I just realized is two years old!): 40' well cars aren't necessarily older and 53' wells aren't necessarily newer. They're built to serve two distinct markets, those being the international market (dominated by 20', 40' and 45' equipment) and the domestic market (now almost exclusively 53' equipment). Overall, the NA 53' fleet is newer, but only because the 53' container is, itself, pretty new. Sure, (most) 53' wells can carry 20'/40' boxes, which makes them more versatile as a 40' ART well car can't carry 53' boxes even on the top deck. However, the roads often try to segregate their international and domestic business... and they really frown on putting a 40' in a 53' as it's highly inefficient from a train-length perspective.

By the way, David Benton... we use the same term (twistlocks) for IBCs in the US... must be a universal term.