by metman499
Thu Mar 15, 2007 11:08 pm
Word on the street is that GVT will begin to scrap some of their ALCO hulks that are in South Scranton. The 351 has been moved to the shop area, presumably for final parting out before scrapping. The loco is still in W&W paint. Either way, get your shots now.
Nick
Moderator for the CNJ, Reading and GVT forums

Username
Alcoman
Posts
1444
Joined
Thu Mar 11, 2004 8:28 pm
Location
Somewhere
by traingeek8223
Fri Mar 16, 2007 11:19 pm
Would the railroad consider selling/donating any of the car bodies? I know the Group in Remsen NY is looking fo a locomative for display(134) and I know the Lehigh & Hudson River fans would be heart broken to lose another one(204).
Matt Giardino
ALCO Historical & Technical Society

Username
metman499
Posts
493
Joined
Sat Mar 13, 2004 9:23 am
Location
Lancaster/Cranford
by RS-3
Sat Mar 17, 2007 10:19 am
As much as I hate to say it (and it does pain me to say it), the 204 would require a ton on money just to put on static display. Every inch of it would need sandblasting, and the windows, headlights, etc redone. Sadly the carbody is in pretty rough shape. If someone wants to save a ex-L&HR RS-3 the Nevada Northern has the 13, also apparently being parted out but in much better shape. The money and parts from the scrapping will go a long way toward supporting the DL's operating RS-3s.

by amtrakhogger
Sat Mar 17, 2007 10:28 am
Because those hulks are tons of steel, they are worth $$ even though
they are derelict. That is why GVT will scrap them.
He is a railroad man. Isn't there a discount for a railroad man?

Username
amtrakhogger
Posts
2004
Joined
Sun Jun 25, 2006 12:16 am
Location
"F" on the Camden and Amboy
by traingeek8223
Sat Mar 17, 2007 10:34 am
Money is money, regardles of where it comes from. I'm sure the railroad would rather sell one of these engines than have to pay an emploee to cut it up with a torch. Now is the time to get on the phone and try to get something done, because once their gone, their gone.
Matt Giardino
ALCO Historical & Technical Society

If you can pony up 20 grand + funds to make the hulk FRA compliant for interchange + funds to move it, I"m sure the folks at GVT will save it from the scrapper's torch.

So you're looking at $100,000 for all 5 engines (scrap value) plus the value of salvagable parts off the engines. The RS-3's were never meant to be "saved" and were purchased for parts. I believe the same logic applies to the RS-11's and the C-425. Railfans, historians and "preservationists" forget that railroads are businesses.

Junk is junk. Can't save everything.

The point I was trying to make is that there are groups out there that would have interest in the other two. There are less and less RS3's out there every day. I can think of 10 off the top of my head that are curently endangered, two of which are ex. LH&HR. That leaves one(BKRR 605) and its days may be numbered. NYC RS3's are slightly better, but some are repowered and two of the un-rebuilt ones are endangered. Don't judge a book by its cover. One man's junk is another man's treasure.
Matt Giardino
ALCO Historical & Technical Society

Username
traingeek8223
Posts
527
Joined
Fri May 12, 2006 11:07 am
Location
Milepost Hobbies, Amsterdam, NY
by pablo
Thu Mar 22, 2007 4:50 am
Traingeek, I think you've completely missed everyone's point. No one is saying that it wouldn't be nice to save these units. It makes little to no economic sense, thouhg, and unless you're going to pony up some money, they're gone.

Username
pablo
Posts
1496
Joined
Sat Mar 13, 2004 7:58 am
Location
Warren, PA
by b&m617
Thu Mar 22, 2007 10:37 am
On a practical note, in addition to the scrap value, the service tracks around the DL shops are clogged with locomotives. Getting rid of some of the parts locos is a good idea to reduce the congestion in the yard. 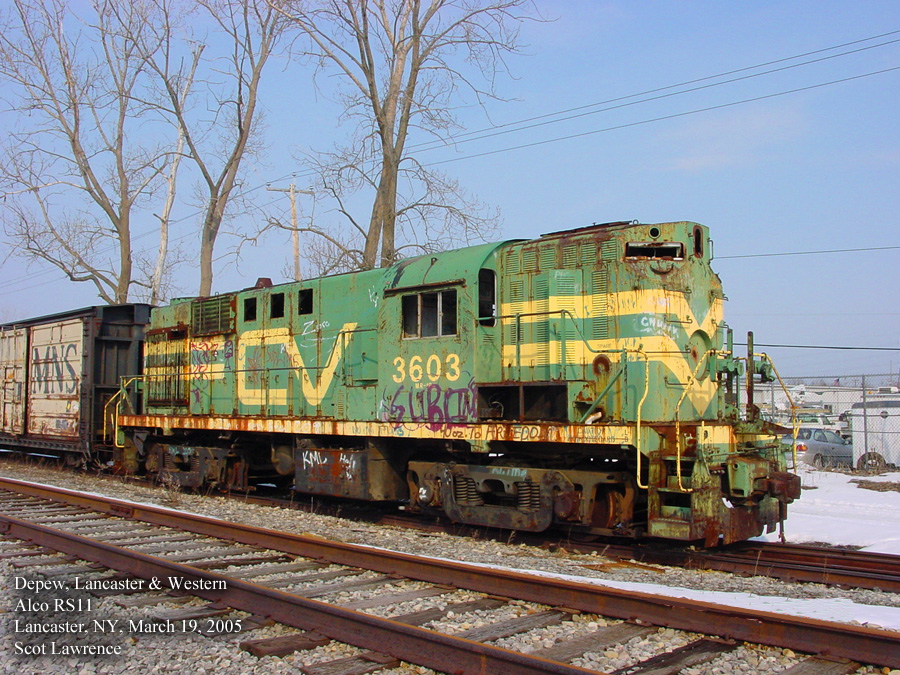 anyone got pics of the other units?
we should at least document them in photographs, if nothing else.

I'm not sure I'd agree that all the locos on the hit list were purchased strictly for parts. Both the 134 and 204 had run a year or two prior to their purchase and in the first year or two after purchase there was talk about their future. The increase in miles and tonnage with the Pocono line pretty much spelled the end for the 134 and 204 as the time and man power just wasn't there for the rebuilds needed for these two units. Its my understanding the 134 was held for several years as a possible serviceable unit as it has a good block and generator. (So good they are going in the 4118, thus dooming the 134.) Sadly the last few years of sitting outside has been very hard on the 204.

I think the W&W RS-11 was also purchased for service but like the two above RS-3s, time and manpower were better spent in the bigger power plus it sustained some damage in delivery to the DL. BTW, it has apparently been taken off the hit list, so apparently there is still some hope for its future.

The 327 (Indiana Hi-Rail C-425) was purchased basically for parts and has been well cannibalized. Like the CV/DWP RS-11 there's little left worth saving.

As for space around the shop, there is always room elsewhere on the railroad to store the parts units. Both the 351 and 134 have not been at the shop for a couple of years. While scrapping them frees up space, it also require a lot of time and effort of the shop personal to remove all the parts they want to keep and then finding (building) a place to store said parts (it doesn’t do any good to have a part if you can’t find it, or it isn’t stored properly).

I’m sure management is looking at both sides of the coin. The units are worth more as scrap as that money can go toward care and feeding of the rest of the fleet. That said I’m sure its not a decision they made lightly. For someone interested the 134 *might* make a good display body. (Got a lot of time on your hands and a pocket full of money and it could run again. I'm sure GVT will be happy to sell it after they pull the generator and motor.) The 204, CV RS-11 and 327 are probably past saving. And DL is going to rethink the 251. (I think it needs a crank and new control stand. I'd bet for its scrap price you can take it home. The body is pretty good.)

some of the heritage info above from:
http://www.newyorkrailroads.com/gvt/roster/
and
http://www.rochester-railfan.net/gvt.htm#gvt_roster