by Otto Vondrak
Thu Sep 29, 2011 9:18 am
Here's your chance to help our museum save an important artifact! We thought it was gone for good a few weeks ago, but now it appears we have a second chance! Here's the details...

Otto (or anyone from the museum listening in)
I dont see any comment area in paypal where you can indicate for "LV CABOOSE"!
there only seems to be a field for entering an amount..

(never mind! I found it..its small and hard to miss..on the "second page" after entering your password:

Mind if I link the blog to some more forums? (railfan.net and RYPN?) 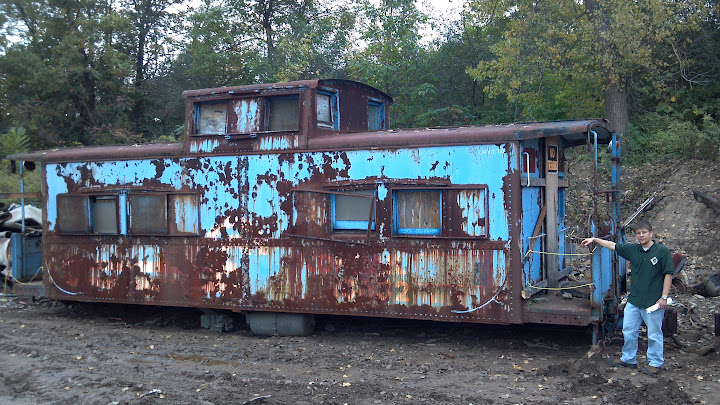 by Otto Vondrak
Fri Sep 30, 2011 9:53 am
We've updated the Caboose-O-Meter! Thank you for your support so far! Let's keep the donations coming in!

by Otto Vondrak
Mon Oct 17, 2011 8:23 am
PROGRESS UPDATE!The caboose trucks were moved from the scrap yard to our museum this past weekend!

Rochester & Genesee Valley Railroad Museum - Trucks arrive! The start of the movement process of ex-Lehigh Valley Railroad caboose #95100 was started on Satuday, October 15, 2011 with the arrival of the caboose's trucks at the R&GVRRM. Here the second truck is waiting to be unloaded by the museum's 6x6 wrecker truck. The caboose body will be next and final preparations are underway to make it happen in the coming weeks. Once at the R&GVRRM, we will mate the body to the caboose to make it whole once again and begin the restoration process. Photo by: C.R. Hauf 10.15.2011

We are currently seeking donations to help cover the cost of restoration... Any amount is appreciated!

Thanks to the generous and enthusiastic support of many private donors, the Rochester & Genesee Valley Railroad Museum was able to act quickly and purchase Lehigh Valley caboose 95100, thanks to cooperation from the scrap yard in Manchester from where it was rescued. In a matter of two weeks, we were able to raise $12,000 to cover the purchase of the car as well as the cost of cranes and trucking to the museum.

The caboose was trucked to our museum on October 22, 2011, and immediately our volunteers set to work to make the car safe for movement over rail up to our restoration shop. An initial investigation of the caboose’s brake system revealed that water had gotten into the pipes, so the brake cylinder was disassembled, cleaned, and repacked. A new crossover hose was also fabricated, which allows the brake pipe to move independently of the air brake equipment. After new valves were swapped in, the air brakes were once again functional by the end of November!

On January 15, 2012, LV 95100 was safely moved up to our restoration shop, the first movement on its own wheels since it was trucked to Manchester in 2005. In February, our volunteers set to work needle scaling the exterior body to remove rust and loose paint in preparation for making any repairs to the steel. Inside, we removed the obsolete oil-burning stove and fuel tank. The oil tank will be inspected, cleaned, and reinstalled, along with a replacement stove we already have on hand. By mid-February we had removed the ice chests from inside the car so that we could make repairs to the rot that was caused by condensation build-up over the years.

At the beginning of March, work had shifted to the interior as we begin to strip paint from all of the walls and fixtures to check for signs of rot and make any needed repairs.

The April 2012 issue of Railfan & Railroad magazine hit the stands, featuring a short article by our vice president Joe Nugent about how we acquired the caboose, and all of the twists and turns that we encountered along the way. We made a visit to our friends at Central New York Chapter NRHS, where they graciously donated to us many parts that we can use to restore our caboose, including a sink, cup dispenser, paper towel dispenser, wind visors, window guards, grab irons, and more.

As we approach the beginning of April, we must raise $2000 to continue the next phase of work on the caboose. This includes purchasing lumber to construct the missing interior fixtures and doors, as well as continuing with paint stripping both inside and out. It is our goal to have the caboose ready for sandblasting and exterior primer by the end of this spring. We have volunteers standing by ready to construct and install the missing interior fixtures, which includes storage benches and new exterior doors. Several volunteers have stepped up to help with needle scaling and paint stripping. But we cannot move forward until we have cash in hand.

The Rochester & Genesee Valley Railroad Museum would appreciate your help in funding this next phase of restoration. It is our goal to restore this caboose to its 1970s appearance as it operated on the Lehigh Valley Railroad. It will become part of our operating fleet, where our visitors will be able to enjoy riding in this caboose as they travel from one end of our museum railroad to the other.

Donations to the Rochester & Genesee Valley Railroad Museum are tax deductible to the extent allowable by law. You can make your donation to the LV 95100 project online via PayPal at http://rgvrrm.org/support (make sure you put “LV 95100” in the comments or notes area) or you can mail your check to R&GVRRM, P.O. Box 23326, Rochester, NY 14692-3326. Please make sure to put “LV 95100” in the memo area of your check. Thank you for your support!

by Otto Vondrak
Tue May 14, 2013 11:13 am
After being saved from the scrap yard in October 2011 by the R&GVRRM and moved into the museum's shop in January 2012, the museum has been very busy working on the restoration of ex-Lehigh Valley Railroad caboose #95100. The project has now reached the phase where we are beginning to put the car back together; starting with the exterior. Part of this work is to install new lower steel side sheets on both sides of the car as the steel that was on there had badly corroded and was removed over the past few months.

Please donate and help contribute to the restoration of our historic Lehigh Valley caboose!

Thank you for your support!

Join us for our May Museum Meeting! Craig Woodworth will present 'Coast to Coast by Train.' The museum store opens at 7:00 p.m., a brief business meeting takes place at 7:30 p.m., and the program begins around 8:15 p.m. This is a FREE event. Everyone is welcome! Cash bar with soft drinks available. We meet at the 40&8 Club, 933 University Avenue, Rochester, NY 14607

Join us for Opening Day of our 2013 Operating Season! All tours begin at New York Museum of Transportation on East River Road. Enjoy trolley and train rides, and tours of both museums for one combined ticket price! Also on display at NYMT will be a 1957 GM Transit Bus restored by Rochester Genesee Regional Transportation Authority, and Bob Malley's 1949 Flxible Clipper painted for Blue Bus Lines (an old company that provided service between Rochester and Buffalo). See our new displays and learn what we have in store for 2013! The museums will be open from 11:00 a.m. to 4:30 p.m.

by Otto Vondrak
Wed Sep 04, 2013 10:13 am
LV95100-welded-riveted.jpg
Just a note that riveting and welding has been completed on both sides of LV 95100 to replace rotten old steel. Next steps include finishing exterior repairs and prepping for primer and other body work. Thanks to everyone who made donations to bring us this far!

by Otto Vondrak
Mon Aug 16, 2021 6:10 pm
So much has happened since 2013! The caboose we worked so hard to save is nearly complete and fully restored. See the full photo album here:

We're raising $1500 to complete the lettering on LV 95100. Help us bring this project over the finish line: