by type 7 3704
Thu Apr 07, 2022 11:06 am
If they bought a bunch of EMUs, it would free up all the diesel locomotives and cars currently used for the Providence line, which could then be used to replace some of the single level cars on the other lines. Which would be a better outcome since the Providence Line would then enjoy faster service.

They should be electrifying Fairmount, Stoughton, Needham, and maybe Franklin, buy EMUs for those services, and then use the locos and bilevels freed up by that to retire the single-levels and GP40MCs, instead of buying new coaches and diesel locomotives.

by scratchyX1
Thu Apr 07, 2022 12:28 pm
It's a shame that the commuter routes in canada and the US couldn't come up with a standard single level EMU , which could do both high and low level platforms, and then ask the various vendors to build something that meets the standard. After all, the PCC standard is still in operation, 80 years later.
Instead of this one shot, custom build per each agency, driving up costs.
I'm sure stadler has something that could nearly meet the requirement now, and other companies could, too.
Of course, having platform extenders on high level platforms, so plate F and above freight could still clear them, which don't cost a large amount would also help.
Anyone know what Brightline is paying for it's high level platforms?
Last edited by CRail on Fri Apr 08, 2022 12:35 am, edited 1 time in total. Reason: Unnecessary quote removed. Do not use the "Quote" button as a "Reply" button.

mbrproductions wrote: ↑Thu Apr 07, 2022 6:46 am Also, I am assuming the entire order for 83 will be complete by the tie the full build of SCR is planned to be finished

SCR only projected a need for 16 new coaches pre-COVID, these were bought in 2019 as ridership surged and capacity was tight. Plus there was a need to replace more of the older coaches. Even if routed over the NEC the number of additional riders, at least initially, wouldn't prompt an 83-coach order. These may not all be delivered by the time Phase I goes live, but should be long before Phase II's current projected completion date - which is far from certain.

Keep in mind either way SCR runs (Phase I or Phase II) they will still utilize all the existing trainsets on their respective inner lines (Middleboro or Stoughton), which have room to add more seats/coaches.

I mean, in a perfect world they would be EMUs

Well, in a sensible world, we wouldn't waste money on expensive equipment that we barely have any reason to buy, especially when the only electrified track the MBTA runs on isn't even their catenary.

It's a shame that the commuter routes in canada and the US couldn't come up with a standard single level EMU , which could do both high and low level platforms

Thats because they came up with standard passenger cars already, the Comets are capable of doing both high and low level platforms, as can the Bombardier Multilevels and our K Cars and Rotems.

SCR only projected a need for 16 new coaches pre-COVID, these were bought in 2019 as ridership surged and capacity was tight. Plus there was a need to replace more of the older coaches.

Yes I am aware of this, but I was under the impression that the 16 new cars were only projected as a need for Phase I, which won't attract as many riders as the Full Build.
People who complain about train horns are the real nuisance.

Avatar photograph taken by me 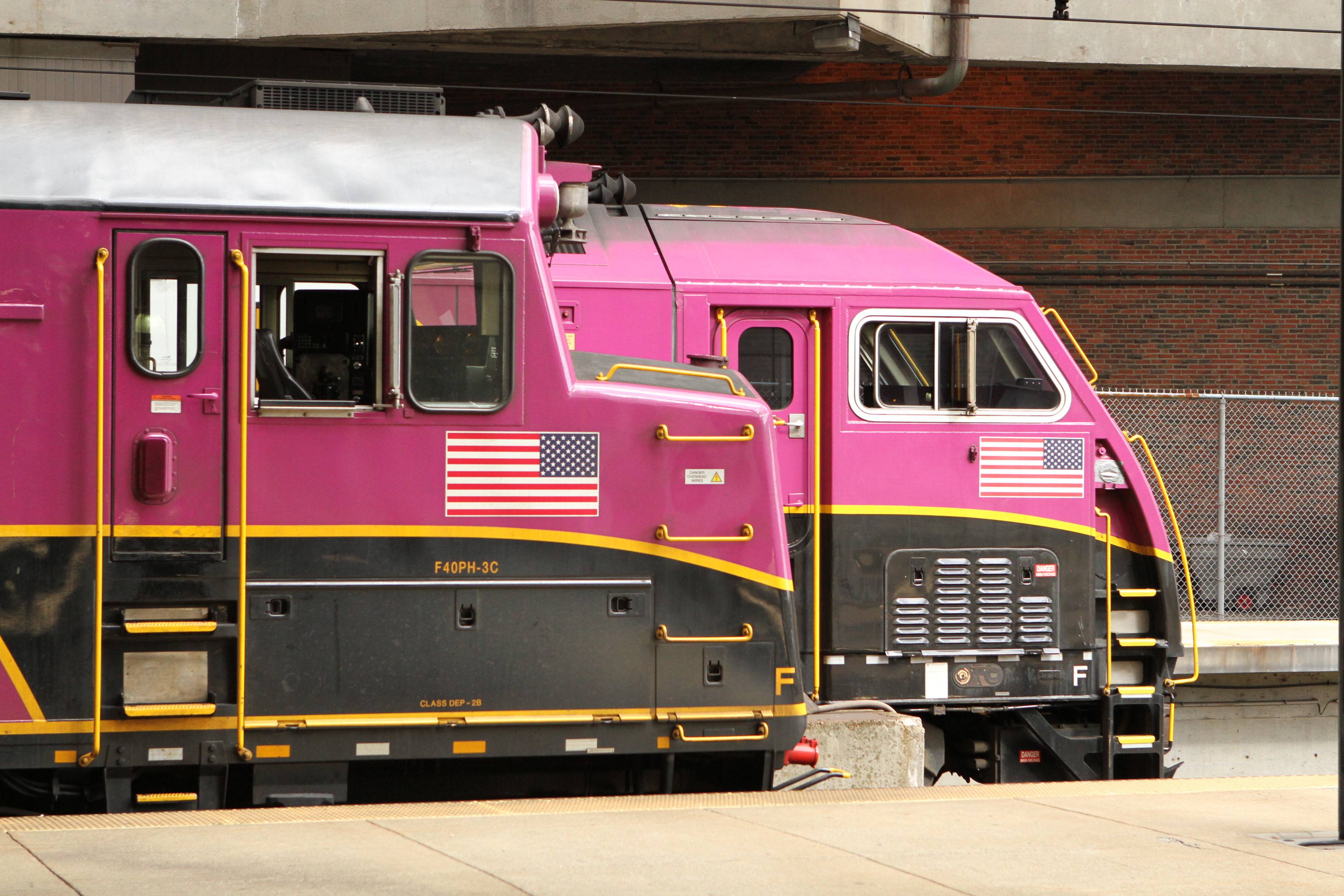 by type 7 3704
Fri Apr 08, 2022 8:07 am
Significantly faster acceleration allowing for faster service, reduction in particulate pollution exposure for passengers (which can be very substantial for diesel locomotive-pulled coaches), reduction in local air pollution, and being able to take advantage of a future fossil-fuel-free electric grid are pretty solid reasons to get EMUs over buying more diesels and coaches.

by jbvb
Sat Apr 09, 2022 8:17 pm
As the new development covers up South Station's platform tracks, its air quality will veer in the direction of Back Bay....

mbrproductions wrote: ↑Fri Apr 08, 2022 6:51 am Yes I am aware of this, but I was under the impression that the 16 new cars were only projected as a need for Phase I, which won't attract as many riders as the Full Build.

Not sure it'll need too much more, it already builds out 2 extra trainsets which can be shifted when the service shifts. And even so as long as the MBTA keeps its overall coach fleet the same size, as they replace single-level cars with bi-level cars they add seating capacity which can result in a few extra coaches. The T will probably earmark some additional equipment needs as part of Phase II as a way to get an additional funding source into whatever the next equipment procurement happens to be.

by Jake Rothman
Tue May 24, 2022 6:28 am
First four cars in the new 80 car option order have arrived onto the property fully wrapped. 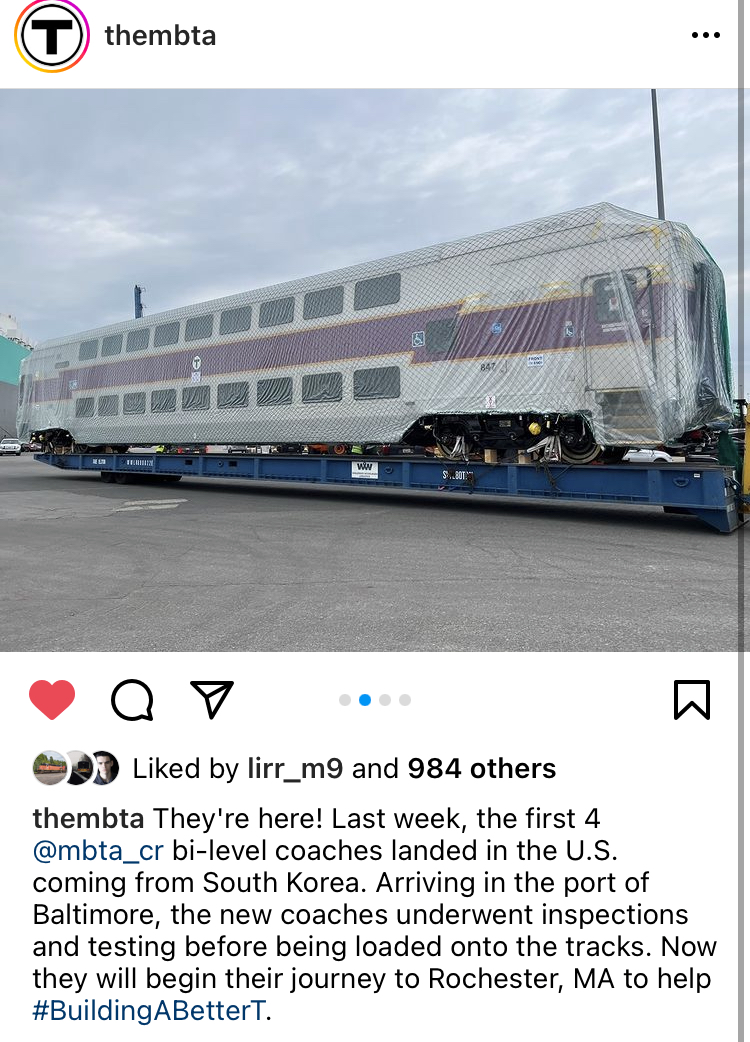 by mbrproductions
Tue May 24, 2022 6:52 am
Saw the original post on instagram, the two road numbers I saw were 847 and 848, does anyone know what the other two are? (8XX and 18XX)
People who complain about train horns are the real nuisance.

Avatar photograph taken by me

by BandA
Tue May 24, 2022 1:50 pm
When unwrapped, do they look like they've been hit all over by a ball-peen hammer like the American-made Hyundai-Rotems?

by johnpbarlow
Tue Jun 07, 2022 9:18 am
It was hard to see but it looks like there were a couple new double deck cars (one is obviously a cab car) parked at the west end of CSX Nevins Yard in Framingham Tuesday morning 6/7/22.
You do not have the required permissions to view the files attached to this post.

I'm sure they need to to do some testing before they are put into service. But do we expect them to be in service by fall?