You can drive that Train to Rockaway Park now boarding on Track 22 plus run a good portion of the LIRR ( all track west of a Long Beach - Salisbury Plains line ) built for the time period 1945 -1955 if you want to take the time to:

Thanks Vince. That of course is a joke since Penn station only has 21 tracks. lol
Bill Mangahas (AKA Newkirk Images LLC)
What did the French conductor say after his train derailed ?
Too Loose La Track. 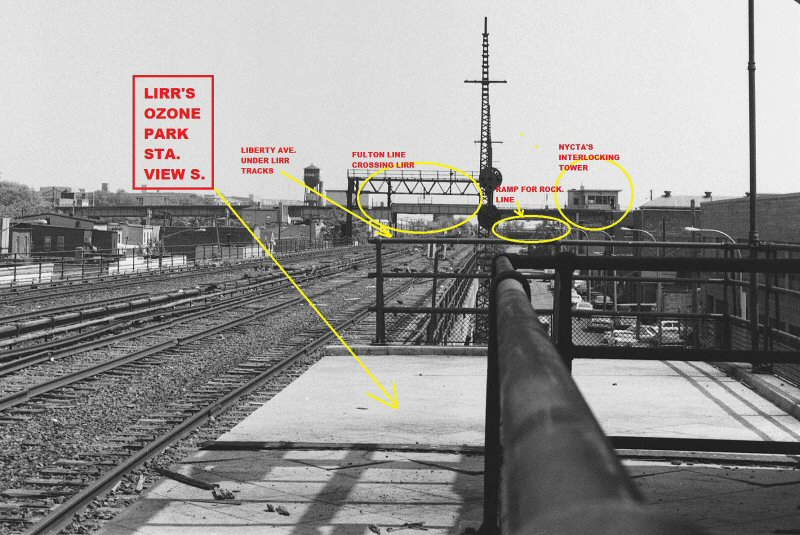 After the 1950 trestle fire there was NO transit service to Rockaway Park OR to Far Rockaway. The LIRR stopped at Hamilton Beach, making stops at Ozone Park and Aqueduct Racetrack. After 1955, the LIRR terminated ALL their trains at Ozone Park until service was completely ended in 1962.

In 1955, ownership of the LIRR's ROW and tracks from south of Ozone Park, across Jamaica Bay, eastward to Far Rockaway (Mott Ave.), and westward to Rockaway Park and all the stations in between was transferred to the NYCTA, who then rebuilt the trestle over Jamaica Bay in a more substantial manner, renovated some of the elevated stations along the line, installed their own signal system, tore up and rebuilt the Rockaway Park yard and terminal platforms and severed the elevated structure and tracks over Mott Ave., Far Rockaway, so as to allow no further connection with the LIRR's facilities on the east side of Mott Avenue. Dave Kelle research/photo collection.

The city built a junction called Liberty Junction, at the BMT's Fulton Street line along Liberty Ave. just south of the LIRR's Ozone Park station, with the upper BMT EL line continuing eastward to Lefferts Blvd. and the lower IND EL line curving south and becoming their Rockaway line, running along the LIRR's former ROW from this point southwards, across the new Jamaica Bay trestle and curving off at what was once Hammel's wye with one line curving westward to Rockaway Park and one line curving eastward to Far Rockaway, Mott Ave., along the LIRR's former viaduct.
Steve Lynch
Long Island Rail Road :: Trains Are Fun

Thank you for posting that photo of Ozone Park station and the info from Steve Lynch.
Bill Mangahas (AKA Newkirk Images LLC)
What did the French conductor say after his train derailed ?
Too Loose La Track.

Ozone Park 06-22-2018.JPG
You do not have the required permissions to view the files attached to this post.
JoeD

Joe: Nice view from the opposite end, View N. Comment: After 50 years of nature in control…. The rails, elevated structure, signal bridge, etc. will eventually rust out and the wood ties rot away. The Earth will reclaim everything in 1000-10,000 years. A mere blink in the geologic cycle…

by BuddR32
Fri Jun 29, 2018 12:15 am
To the original picture, the steel structure rising is the substation at the Broad Channel Station. It has the same two tier shape as what you see today.

by newkirk
Tue Sep 11, 2018 3:23 pm
A scan of the original that I just donated to the Oyster Bay Railroad Museum.
Has anyone here ever seen this item ?

(click photo to enlarge)
You do not have the required permissions to view the files attached to this post.
Bill Mangahas (AKA Newkirk Images LLC)
What did the French conductor say after his train derailed ?
Too Loose La Track.

newkirk wrote: Has anyone here ever seen this item ?

Believe me, it looks as old as the scan. Not a reprint or hoax.

Possibly the only one in existence ?
Bill Mangahas (AKA Newkirk Images LLC)
What did the French conductor say after his train derailed ?
Too Loose La Track.

by Jeff Smith
Wed Nov 07, 2018 2:56 pm
I merged in some older threads into some photo threads concerning the historical operation of the LIRR Rockaway Beach Branch and retitled. For grins and giggles, here's the Wiki take on it: https://en.wikipedia.org/wiki/Rockaway_Beach_Branch" onclick="window.open(this.href);return false;
Next stop, Willoughby
~el Jefe ("Jeff Smith Rules") :: RAILROAD.NET Site Administrator/Co-Owner