Here's a map with the GPS tracks showing where we flew... Plenty of trains and cars everywhere in the Niagara Falls and Buffalo areas. We couldn't fly over Frontier because of its proximity to the Buffalo Airport but we did get a close and personal look at an AirTran MD-80 about a mile away from 1500' up. Alco power sitting around on the BSOR in Eden and North Collins (the S-2's at Winters and the HH660 still sitting in the weeds). Got a look at the new gas customer on the BSOR as well.

The WNYP enginehouse had one of the 43x engines, 630 and what appears to be leased power sitting outside. A nice surprise on the WNYP - an NS empty coal #523 at track speed with UP and SP power on the head end! 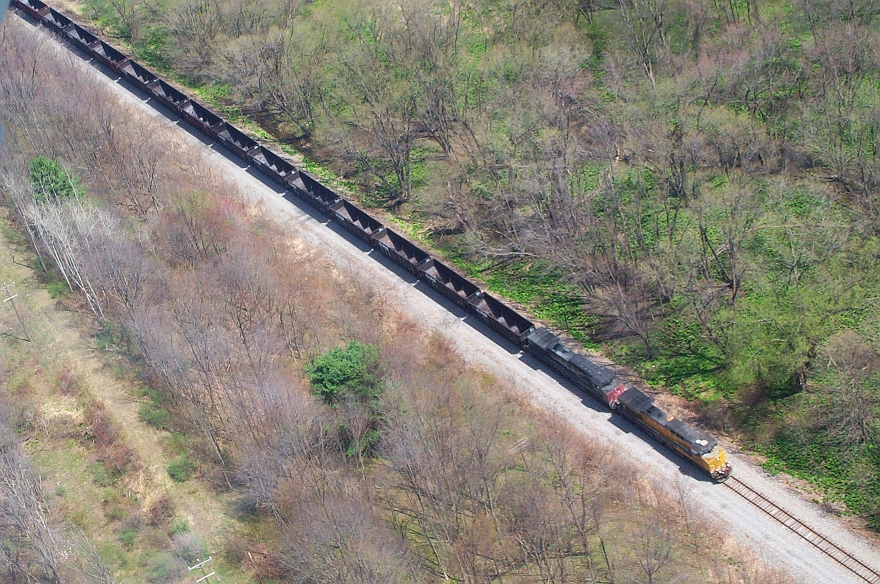 Olean Yard with a bunch of cars and NS MOW equipment... The old roundhouse at the Dresser-Rand factory somewhere along the WNYP in... um... ??? The repaired washout in Belmont... From that point the digital camera was full and I switched over to video. I'll try to capture some stills at a later date (nothing terribly exciting... kinda grainy and shaky).
Last edited by nessman on Tue Apr 27, 2004 8:14 pm, edited 1 time in total. * We were originally going to fly over to Corning and follow the B&H to Wayland and then land at Dansville, but heavy turbulence flying through the valley over the WNYP was starting to make me nauseous, so we headed straight to Dansville. Solid ground and food in my stomach was what the doctor ordered (and no, I didn't hurl all over the plane!).
* Landed in Dansville for some $134.12 salads at McD's which is across the street from the hangar. Fueled up and headed north. By this time we were out of the hills and the ride was much smoother for the rest of the trip. The following pictures are capture stills from my camcorder which are unfortunately low-rez... * Checked out a gully just north of Dansville that was discussed on the previous version of railroad.net * Flew by the salt mine in Mt. Morris - here's the pair of G&W switchers assigned to the mine. * Circled over Lakeville and the LAL shops * Saw a concrete/stone arch trestle on an abandoned ROW in Avon and the new agri-business there as well. * Circled over LeRoy
* Flew north to Brockport and followed the Falls Road to Lockport (at that point SST needed a break and let me take the controls til Lockport... wheee!). That's me at the controls. * Landed back in Akron. A couple of seagulls on the runway flew into our path and almost got the Cuisinart treatment (look closely)... We clocked a total of 4.2 hours in the air, flew about 400 nautical miles and had a top ground speed of 127 knots. I flew the plane from around Bergen to Lockport. It's not as easy as it may seem. You need to watch the airspace around you, the altimeter, vertical speed, air speed, etc... all while trying to keep the plane on course and at level flight. But it was a lot of fun and it definitely falls in the "cool things to do category".
Last edited by nessman on Sat Apr 24, 2004 10:09 pm, edited 5 times in total.

SimTrains wrote:Stunning, absolutely stunning!! What a way to railfan!! I am wondering, are there places that are restricted? Near airports and such? Or are there any other places that you just can't go? Do you have a website, I would love to see more!!!!!!!!

Well, as some of you know, SST is deaf (he lost his hearing seveal years ago - but long after he started flying and got his instrument rating, so he's most certainly capable in the air). Without a qualified pilot who can hear in the plane with him to work the radio, he has to fly under VFR (visual flight rules) as he's unable to contact an air traffic controller for clearance to fly into controlled airspace around major airports and other restricted air space that requires filed flight plans or other post-9/11 loopholes to jump through in order to fly there. Otherwise, the sky's the limit. I'm not a licensed pilot (I only play one on TV), but he'll ask me to listen to the radio for any traffic that might be in our area and for weather info.

My website is linked below and these pictures are in the pictures archive under "Aerial". There are also some low-rez pictures I took several years ago first time I went up with him.

People like you are the reason why I don't go trackside to railfan any more (or if I do - I make sure it's when I'm packing or someplace where no one will come and bother me).

The fun of the hobby is slowly waning for me. Instead of a thank you, or "hey Les - great pictures" - I get criticism instead.

My only complaint (don't get too worried about it) would be that the page took forever with my broadband connection to load with so many 'big' pictures. It'd probably be alot for a dialup to do.

Aside from that- the more the merrier.

Thanks. Yeah - actually the pictures are on a server here at my home (where my website is hosted) - so the reason why they take so long to download is because of the upload speed cap RoadRunner imposes on us lowly home users - a screaming 384 kbps (as opposed to the 3 mbps download speeds we get).

Username
nessman
Posts
1724
Joined
Thu Mar 11, 2004 10:58 pm
Location
Isle of Sodor
by Schooltrain
Sun Apr 25, 2004 12:09 pm
Great pictures, Les. It's nice to see rail facilities actually in use, thriving and improving. Your pictures should be a reminder to all of what our railroads used to be and can be again.

Username
Schooltrain
Posts
129
Joined
Sat Mar 13, 2004 6:17 pm
by SST
Sun Apr 25, 2004 3:15 pm
Seeing these pics as a review for targets is one way of looking at it. On the other hand, maybe the TSA and other authorities could look at these pictures and say that these are great pics that identify security risks and vulnerabilities. It should give them a different perspective. Not just a view from the ground.

If anything, the authorities should get there butts into the air and start looking around. I still have my commercial certificate...hire me.

Username
SST
Posts
1506
Joined
Fri Mar 26, 2004 12:11 pm
Location
Buffalo
by O-6-O
Sun Apr 25, 2004 7:04 pm
WOW; Hey chill out guys, my outrageous and stupid remarks were an
attempt to be humorous and shine a little light on this ridiculous notion
that railfans with cameras are a "threat" to national security. I obviously
failed. The pictures are of course great, I thought that this would be self
evident. Ness, sorry your trackside experiances have been so bad mine
have been mostly good ones. I think you would actually enjoy my comp-any. Again if i offended anyone I,m sorry as this was NOT my intention.

STEAM ON
One way or the other we're gonna fix this railroad.

ONLY IF U had gone 10-15 miles more south of Dunkirk, you would see me and my car sitting between NS and CSX tracks with buddies!!

Only if I had knew that u were going up, I would have told u to look for us!! Like you, I had good time last fri and sat...


The WNYP enginehouse had one of the 43x engines, 630 and what appears to be leased power sitting outside

The orange and black engine looked like a (Gasp!) Cartier M630 Alco!
Could it be????
Next time you go over there, take a closer look.