by Gadfly
Sat Sep 27, 2008 9:24 pm
This is just a bit of trivia, but how many of you fellow railroaders remember the days of "Watch Cards" and the regular visits to the Watch Inspector to have your watch cleaned and inspected? Yes,
I'm an "old head" and I started in the 70's when this was STILL an accepted practice. Trainmasters and Superintendents would sometimes stop you and ask to "Compare Time", and you better have your
approved watch on your body!

And your time best be CORRECT or you'd get a chewing (likely) you wouldn't soon forget!!!

And the watches. For many years, we know that railroaders carried pocket watches. My first watch was actually a Bulova Accutron wristwatch, but it kept giving trouble (and getting ME in trouble!

)
One day I was rummaging in an old antique shop and, lo and behold, there was a Hamilton 992 in Fine condition! The man only wanted $100 for it, and I grabbed it and took it down to the old jeweler in town that was our approved watch inspector. In the mid-70's, the Hamilton 992 was the only pocket watch in our Timetable still approved for Railroad use. I researched the serial number and found that my 992 was made in 1910. I still have this watch, some of the watch cards, too, and it still runs and keeps perfect time even tho it is almost 100 years old!!!!

How many of the real railroaders carried, or have one of the old RR pocket watches?

(remember those cheapie Seiko and Pulsar "railroad" watches?) The bracelet on the Daytona weighs more than eiither of those 2 offerings......
Traveling Engineer, Coast to Coast, Border to Border.

by Gadfly
Mon Sep 29, 2008 2:33 pm
I don't carry mine much anymore, either; it's too valuable. It's hard to fathom that it is almost 100 years old! WOW! AND keeps perfect time. The Hamilton railroad watches were, I believe Model's 992 and 992B. They had to be 21 Jewel, Lever set and listed in the company timetable. By the time I arrived on the RoW, the Hamilton 992's were the only ones still approved for use. "Illinois" and other "railroad" watches would not pass inspection on our railroad. I don't know why. It always amused me to see fans go around carrying their "railroad" pocket watches with the "hunting" cases (the ones with the lid) and the picture of a choo choo on 'em! LOL! No more a "railroad" watch than a TIMEX--tho there's nothing really wrong with them; they work really well for what they cost. "Keep on ticking and all......................."

My wristwatch was a Bulova Accutron and, I believe, the first wristwatch ever approved for RR use? I might be wrong on that. But it gave trouble. I got a Seiko "railroad" watch and it WAS an approved, timetable-listed watch. At first, you STILL had to have it inspected and keep your watch card ready for grumpy Trainmasters to look at! The company gave us Pulsar "railroad" watches that said "railroad approved" on the dial-----and I guess they were. By that time, I was out of the Transportation Dept and no longer had to take the Rules exam. But the watches had, in addition to, "railroad approved", the NS logo and "Norfolk Southern" imprinted on the dial. I got 2 of those over the years and still have them.

Eventually, they stopped having to do the watch inspection thing and, I guess, it was because technology advanced to the point that most electronic movements had about the same high accuracy.
Even those $7.88 "railroad-looking" watches at WalMart are about as accurate as the $150 Seikos from 15 years ago!

by DutchRailnut
Mon Sep 29, 2008 2:56 pm
Despite real railroad watches being intersting, and collectors items, todays off the shelf $50 timex, is probably about 4 times more accurate, and without maintenance other than changing a battery.
If Conductors are in charge, why are they promoted to be Engineer???

by Gadfly
Mon Sep 29, 2008 5:04 pm
Oh, I don't doubt that at all! That's what I meant by the speculation as to why the watch inspection thing went away. It just wasn't needed anymore as electronic watches became more and more accurate. Despite that, my old Hamilton will stay right with my wristwatch which ain't bad for being almost 100 years old.

and scroll down to my vignette on the Pocket Watch for data and photos.

And, as for a watch card showing recent and regular inspections, check this out: 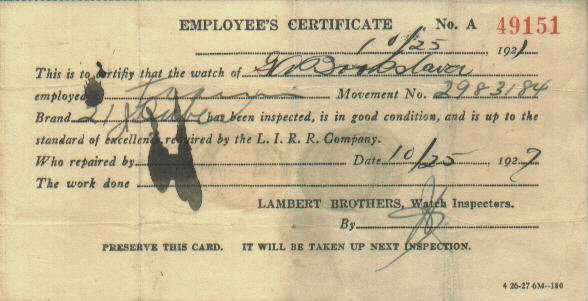 I own and used to wear a 1923 Illinois Bunn Special that belonged to the late George G. Ayling and was given to him by his wife when he was promoted to Station Agent at Central Islip in 1923.

I've since purchased and wear constantly a wonderful timepiece that I acquired for a great bargain on e-Bay. A Hamilton Railroad Special with double-sunk, Montgomery dial (which dates from 1940 or a little later) and bar-over-crown case which houses the 1915 works of a Hamilton model 992.

As my vignette states, you purchased the works and then you purchased the case separately and your jeweler mounted one in the other. As Hamilton didn't issue their "Railway Special" model 992B until 1940, that is how I know my dial is 1940 or later as it says "Railway Special." The serial number on the 992 works tells me (after consulting my serial number chart) that the ticker dates from 1915.

Just IMAGINE the amount of miles that timepiece has traversed! And on what famous named trains it may have operated (or perhaps dinky short-lines that were equally fine railroads!)

by Engineer Spike
Tue Oct 28, 2008 11:56 am
I hired out in 1997. I was in passenger service, and soon got a silver Seiko railroad watch. The passenger crews were religious about correct time. The good thing is that the second hand stops, when it is being set. I thought that it kept time well. I got a gold one when I was promoted to engineer. It so happened that the jeweler was having a 1/2 off Seiko sale. This one got destroyed, and I could not get another at the time. This time I was forced to buy a Citizen railroad watch. It is ok.

by 3rdrail
Sat Nov 08, 2008 8:21 pm
Does anybody know about these Hamilton 974 "Electric Interurban " 17 jewel pocket watches that seem to pop up frequently at train shows, etc. ? Are they a legitimate electric railway watch or just a RR watch knock-off ?
~Paul Joyce~
Moderator: Toy Trains, Model Railroading, Outdoor and Live Steam
Paul Joyce passed away in August, 2013. We honor his memory and his devotion at railroad.net.

by Gadfly
Sun Nov 09, 2008 1:35 pm
I believe the real ones were/are 21 jewel. Likely a "knockoff" designed to fool train buffs. I've never seen one of these, tho like the ones you mentioned. So, who knows?

In the Hamilton line, the 992, 992B and 950(B) were the last pocket watches listed in the NS timetable. Most of the current(?) watches were the Seiko, and Citizen (there are a couple of others, but I forget their names). These had "railroad approved" on the dial and if you were an actual railroad employee, some companies (such as NS) gave them to workers as safety awards. Often they would have the company logo on the face as well. (I have 2 of the NS watches.)

by wis bang
Wed Nov 26, 2008 3:43 pm
I have my Pappy's Hamilton. The white face is scared from an accident during WWII where he was thrown against the side of a car full of scrap & a sharp chunk poked him in the chest. Watch stopped it.

by Tadman
Sat Nov 29, 2008 7:41 pm
Ha, you guys found out one of my other hobbies. I'm a wristwatch fanatic. I can tell you that Omega still makes a Railmaster, but it costs >$1000. It's likely more of a reissue or homage piece, although I'm sure it would hold up in the yard or on the road as well. Just don't wear it when you're working a transfer through the roughest part of town, it might find an owner that wants the watch more...

Also, Ball, the original RR watch brand, has been reinvented and has many railroad themed watches. Again, they cost >$1000, so they are more targeted at the watch enthusiast. They do have tritium hands like a Luminox and are thus quite bright.

Finally, I think Seiko and Citizen still make railroad approved watches. However, Dutch is right. A cheapo quartz Timex will do just as good as a $1000+ watch anymore.
Dig the new rr.net Instagram account: @railroad_dot_net

by Tadman
Mon Dec 08, 2008 7:51 pm
Update: I've found this watch by the manufacturer of the clocks in Swiss RR stations. Not sure if the personal wear this watch, but a neat related piece. One of these days I'm going to pick up a similar one, but I'm not paying retail...