BM6569 wrote: ↑Fri Sep 10, 2021 10:17 am Republic Services is looking move to out of Ayer yard to a larger spot so they can expand. Was in a recent STB filing. They have reached an agreement with PAR and CSX to help with the move.

Just for fun anyone want to suggest a location? I'll throw a few out: 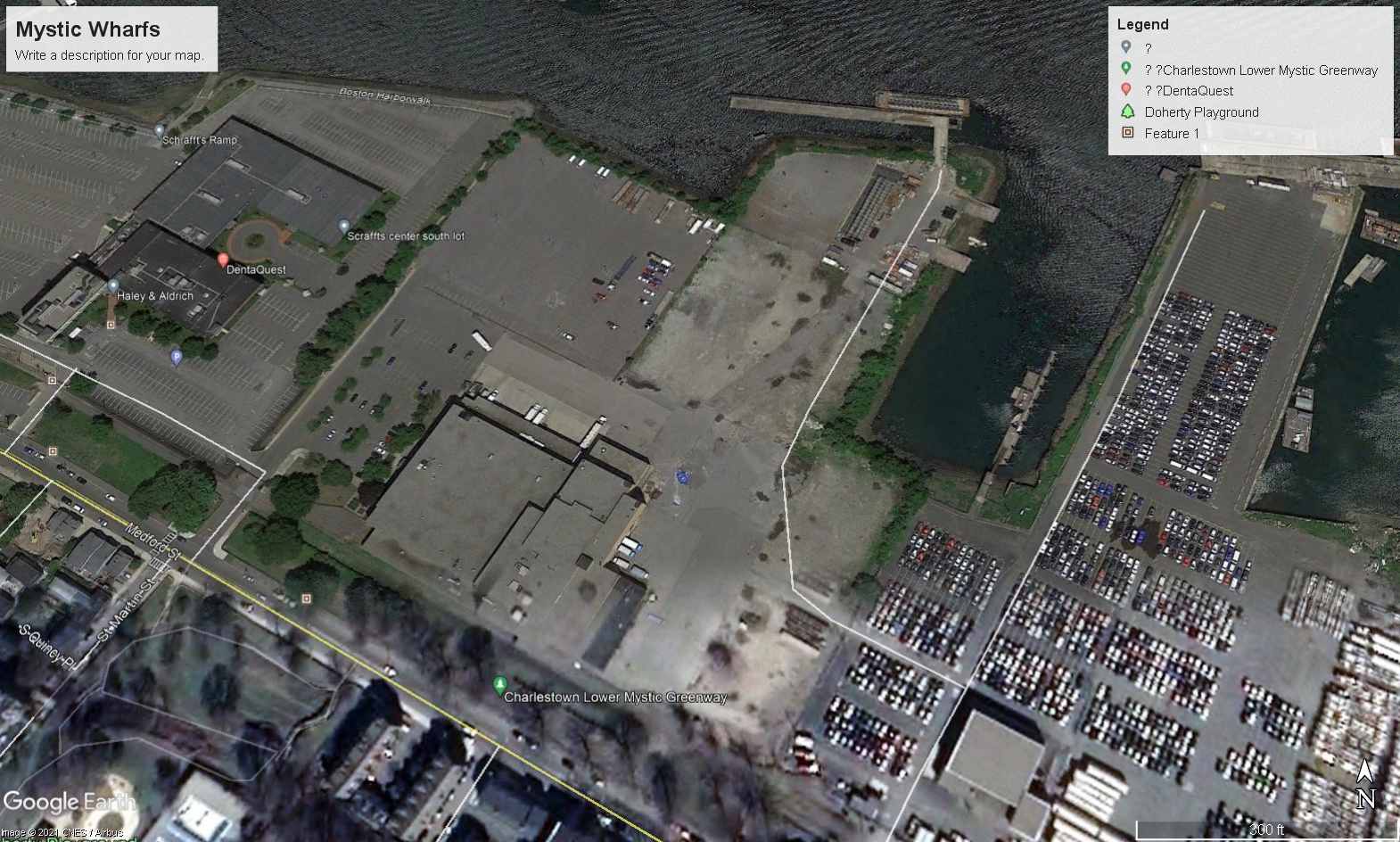 Sure, Pan Am "gets what they get" for traffic, but I'd like to think that Chessie wants, with her resources to develop better rail service to Maine, that the thrust would be to the finished "Products of Forests" industries (plywood, paper) and development of maritime port traffic (Portland, Searsport, Saint John).

by roberttosh
Fri Sep 10, 2021 7:30 pm
Why wouldn't they want thousands of cars per year of business, that's all private equipment, easy to switch and has virtually zero freight claims? C&D, MSW, dirty dirt, etc already make up a major portion of what CSX hauls in New England and it will only be getting bigger.

by newpylong
Fri Sep 10, 2021 7:50 pm
Yes, it's gravy traffic that they can't even handle right now and it's only going to grow. Trash is the new paper for New England rail. CSX is going to eat it like a buffet.

I know Casella in Boston really wants rail service and I heard rumor of another trash outfit coming on in Woburn. I also heard that the cement plant there was recently sold and they want to get product from Dragon on the Rockland Branch.

Note that I've inserted 1 or more "x" characters where text was redacted in this filing.

I think item e above is interesting in that I think it will take the current shipment of Republic trash containers / C&D gondolas off the PAS routing to RJ and place them on the B&A to Selkirk Yard, if I understand correctly. I'm guessing would permit CSX to consolidate the Ayer trash/C&D CSX with the trash/C&D that CSX collects from Leominster, Brockton, and other northeast US locations. But it's more tonnage to be removed from PAS, which plays to Canadian Pacific's contention that in the long run the proposed transaction will result in a downgrade of the PAS as a competitive route to/from New England.

And to the point re: CP's concern over the route's viability is this excerpt from a Trains Magazine on-line article including commentary from CSX CEO Jim Foote:

CP also contends CSX over the long term would route its single-line traffic away from Pan Am Southern and onto the B&A, which would significantly diminish the viability of the former B&M main line that carries CP interchange traffic to and from the heart of New England.

Foote was perplexed about why CP wants to continue to run its New England traffic through the Hoosac Tunnel, which he noted has clearance restrictions and cannot accommodate double-stack intermodal traffic. CP does not route intermodal trains via interchange with Pan Am.

newpylong wrote: ↑Fri Sep 10, 2021 7:50 pm I know Casella in Boston really wants rail service and I heard rumor of another trash outfit coming on in Woburn. I also heard that the cement plant there was recently sold and they want to get product from Dragon on the Rockland Branch.

Let's hope these come to fruition. Interestingly, doing a bit of image searching on Google Earth, Casella had rail service until the tracks were pulled up about 20 years ago: 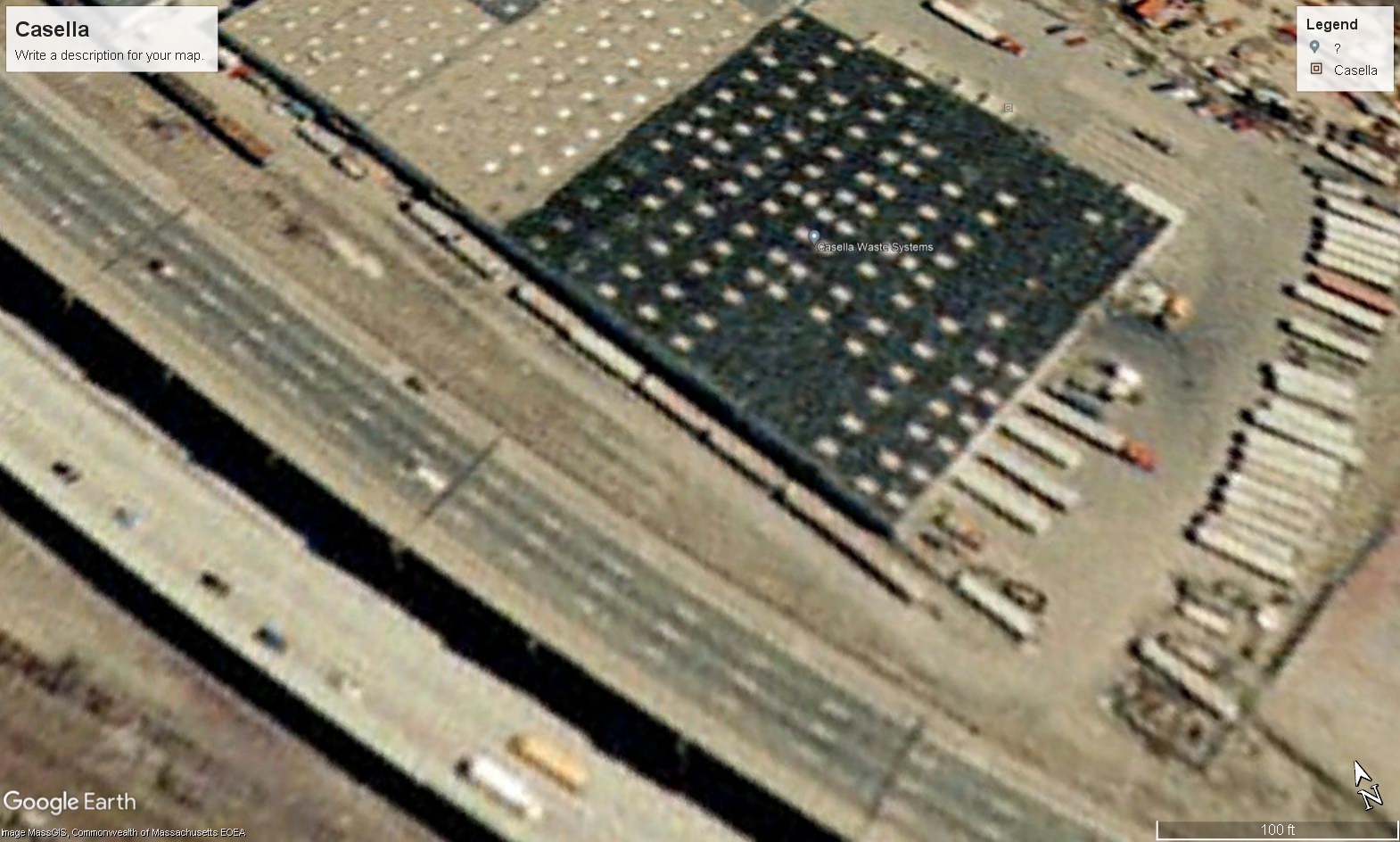 by GP40MC1118
Sat Sep 11, 2021 11:42 am
Except that this goes against the "vision" that Somerville and Boston have for this area. Definitely not rail. Also the serious crimp in railroad operations flexibility brought on by the result of GLX (Green Line)(loss of Yard 8).

by newpylong
Tue Sep 14, 2021 8:09 pm
The rumor is NS has finally had enough and will be crewing some of their trains again on PAS. Management has been running half the trains.

They want to bring the dedicated auto train back as they landed a Toyota contract at Sanvel and will be building another track. Talks of a dedicated trash train too. All depending on crews really. Tonnage is way up on PAS and they can't move it.

by CN9634
Tue Sep 14, 2021 8:18 pm
Wait. NS wants involvement and direct management over what they’ve owned half of for more than a decade?? How dare they recently become woke.

You can take a Google Earth ride behind Casella. It's not exactly an area that has much appeal or "vision".

This is the location of the tracks in the past: 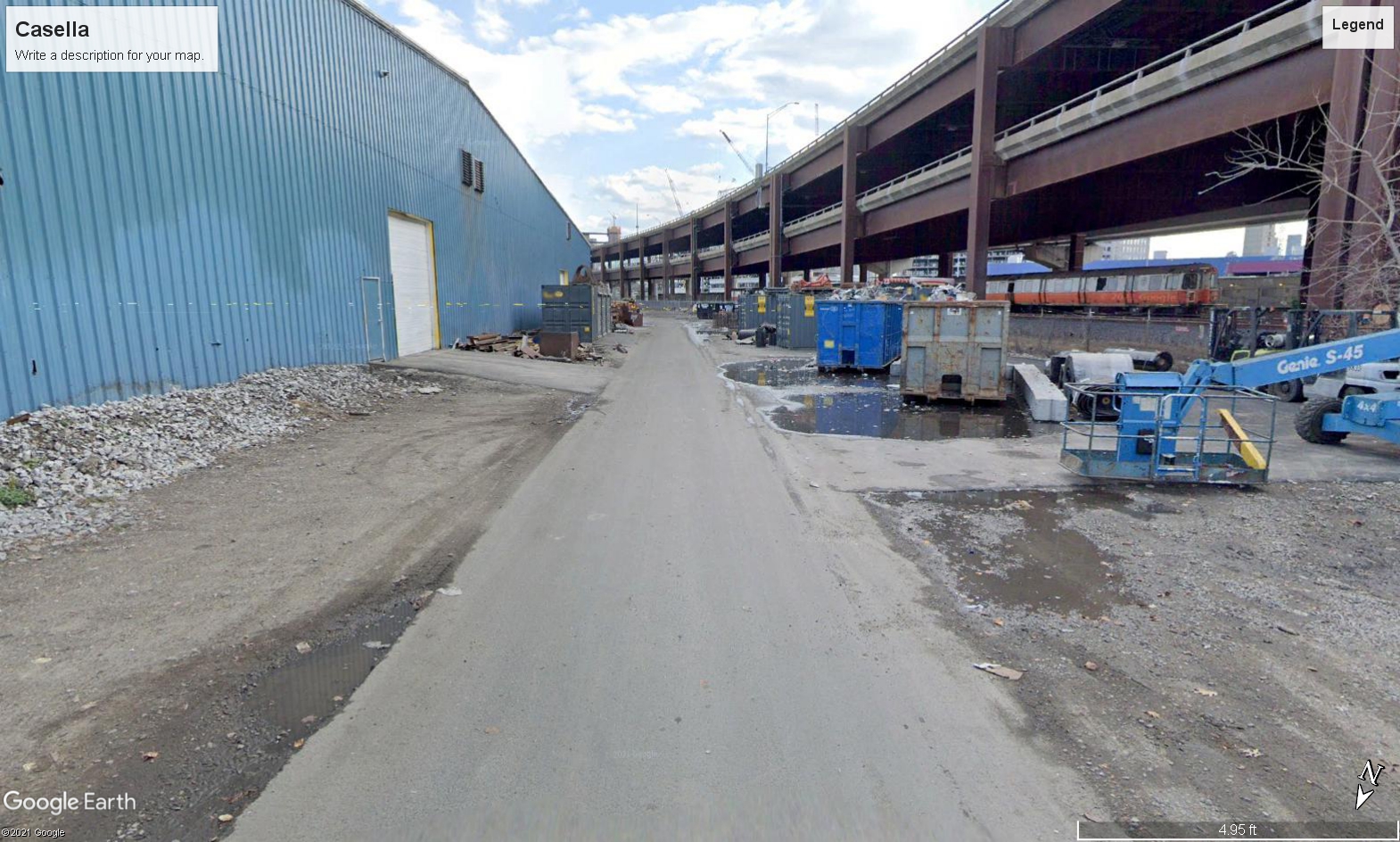 by F74265A
Wed Sep 15, 2021 7:55 pm
Now that greater Boston is a big trash exporter, rail infrastructure will have to be added somewhere—“vision” notwithstanding—to keep the trash flowing out of state. There used to be quite a number of landfills in eastern mass but I can’t think of any that we’re not capped and closed.
This could be huge business for years since Boston will keep making refuse in high volume and it is possible that the carriers gain pricing power since there is nothing else to do with it because incinerators are deemed not green also.
This will only end when the recipients of the trash ban out of state waste

Just for the hell of it I did some image searching and found this from when the old Track 61 yard next to the Convention Center was cleared. It's bigger than I thought. There is potential for a 4 track pad area of about 1500 feet in length here. I would think this could be used for at least a small trial container service out of Conley. It's probably a 5 minute dray away. 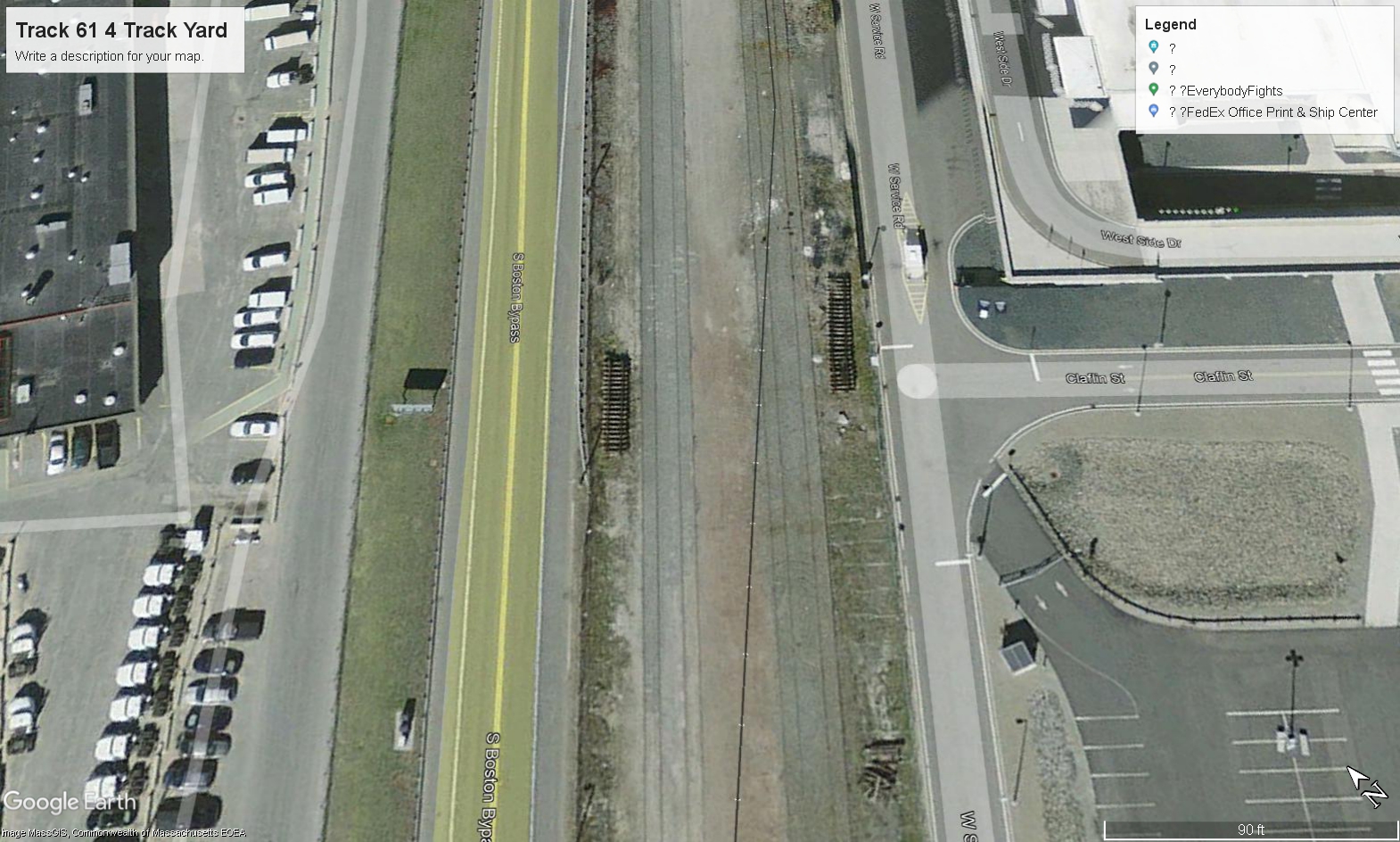 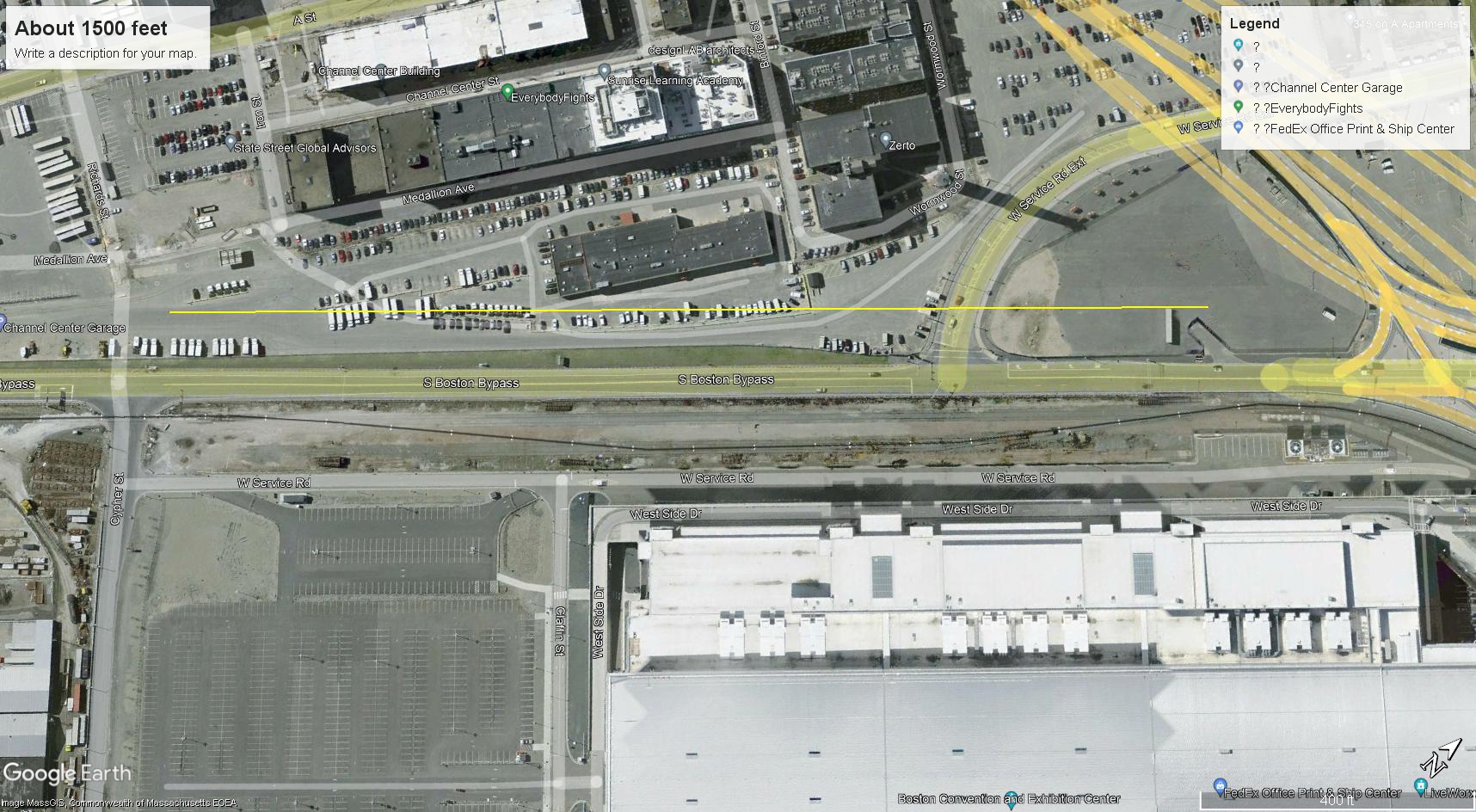