by shadyjay
Wed Oct 09, 2019 6:43 pm
The NH FA-1 Alco #0401, along with the U25B #2525 and others recently posted on NERAIL, are all owned by the Railroad Museum of New England. Originally, they were the Connecticut Valley Railroad Association, and were one of the groups influential in starting the VRR back in the late 1960s/early 1970s. CVRA ran 2-8-0 #97 on the New Haven RR during its final years before PC, and wanted a place to run steam regularly. At some point after VRR Day 1, CVRA changed its name/focus to historic preservation, thus acquiring the CVRM moniker. CVRM was influential in saving the last New Haven motive power, such as the aforementioned FA-1, U25B, and also RS-3 #529, plus numerous freight and passenger equipment. They also had a E9 that was painted/numbered as a New York Central unit (this unit was sold, was at Danbury, now is somewhere in C&O land IIRC). At some point in the late 1980s, the name was changed to RMNE. The museum had a yard in Old Saybrook along the VRR, and had a presence in Essex, providing much of the equipment on display, along with a display and souvenir car. On occasion, this equipment was put in operation, mostly during special Railfan Day events, but nothing regular. A few exceptions: coaches 409 and 1102. In the early 90s, the RMNE was looking for a new home, and after some false starts (Danbury and Willimantic, which in turn, created railroad museums themselves), got their hands on the Waterbury-Torrington, CT line. It wasn't until very recently (within the past year or two) when the final pieces of equipment were moved off the VRR. The RMNE now operates the Waterbury-Torrington line as the Naugatuck Railroad. In the ensuing years, they have amassed quite the collection of railroad equipment from throughout New England. There's only one display track in Thomaston, so you won't be able to get up close to the U25B, RS-3, or FA-1. They do have a Boston & Maine SW-1 #1109 which graced the a front display track at Essex at a point in the early 90s. Their train ride does go by their yard/shop, where you may catch a glimpse of said equipment. I believe, as time/man power permits, they plan on getting the aforementioned back on the road.

Now, that was by no means a "tell all" of the early history of the VRR, CVRM, et al, and I'm sure those in the know will correct me if I'm wrong.

Meanwhile, the colors are changing and there's steam daily (plus the East Haddam Swing Bridge Special on weekends) throughout the month of October along the Valley line. Come on down, ride the steam train! And, as always, be safe out there.

by CSRR573
Wed Oct 09, 2019 6:44 pm
So in a perfect world where the valley line is 100 percent operational, How far north can the valley operate to? Looking on streeview there seem to be some really scenic spots along the river closer to middle town

by shadyjay
Wed Oct 09, 2019 7:25 pm
If 100% of the VRR track was operational, that would take it up to the Maromas section of Middletown, which is where the Pratt & Whitney aircraft plant is. Basically, the point where the river changes direction, from n/s to e/w. What would be better is a trackage rights deal to bring trains right into Middletown proper - alongside HarborPark/Route 9. With the state-owned P&W tracks, some 4 1/2 miles from River Road to Maromas out of service for years, it would take some work, but nothing monumental. I think those tracks are ConnDOT-owned, vs VRR which is DEEP owned.

- Are tracks intact all the way from Middletown, through Maromas, to Deep River and Old Saybrook?

- Where is the change in ownership between Valley Railroad and P&W?

- How far north are Valley Railroad tracks open? And how far for revenue service?

by ebtmikado
Thu Oct 31, 2019 12:04 am
Otto,
That answer is pretty complicated. If you can wait until Friday, I can send you some stuff.
Lee

by ebtmikado
Thu Oct 31, 2019 12:23 am
But, as a beginning: Yes, sort of.
Less than a mile North of Maromas (division post) there is a small washout in P&W territory.
From Maromas (MP 21.77) south to MP 17.75, a quarter mile south of Higganum, track is intact, but out of service.
There is a washout here.
From here to MP 14.75, Friends of the Valley Railroad maintain the track for speeder and hirail rides. The railroad crosses Mill Creek here, on the High Bridge, which hasn't seen a train, or been inspected in over 50 years.
In a cut about a quarter mile south, at MP 14.3, the state, owner of the railroad, permitted a dilapidated bridge to be filled in where track is in a cut.
Until it is determined what condition the High Bridge is in, there is no sense in proceeding with the replacement of the fill.
The track from MP 14.3 south to Goodspeed yard at MP 12.5 saw restoration of trains in July, 2017.
From Goodspeed south to the Amtrak division post at MP 0 in Old Saybrook, there is regular scheduled service.

by Backshophoss
Sat Feb 06, 2021 1:14 am
Bump,for the speeder bike fan!
The Land of Enchantment is not Flyover country!

by shadyjay
Mon Feb 08, 2021 1:46 pm
Otto, if you still have questions about the line, I can fill in any missing pieces. It is 5 miles from the diamond in Middletown at the Air Line down to the Maromas area, where the "division post" is between CDOT (PW) / DEEP (VALE) ownership. There hasn't been a train south of MP 1 down to Pratt & Whitney at MP 5 since the 1990s and at last check last year, the tracks in that area are definitely out of service. Around the HELCO plant on River Rd, the tracks were quite overgrown and there are sporadic washouts along that line. Today, Providence & Worcester only goes on the portion alongside Route 9 and rarely if ever goes further south/east.

For those curious, the VRR/EST&R is running rail bikes through the winter on the "outside world" connection between Essex and Old Saybrook. These usually go on sale on Tuesday before the weekend, *if it looks like the weather forecast is good (ie, not precipitating, not too cold/windy). While not as scenic as the north end of the line, it is more "natural" at the south end (less backyard running more secluded woodlands), and has been well received by the guests.

We hope to have steam running again in the spring. It is our 50th anniversary year this year. I would keep checking the web site (www.essexsteamtrain.com) for any possible announcements of schedules, anniversary events, etc). We are starting our season this coming weekend with dinner trains, which is something new for this season. Again, all info on the web site. These are powered by our 80-ton diesels.

Hope this helps and hope to welcome everyone back this season!

by FLRailFan1
Sat Apr 17, 2021 12:14 pm
How did Connecticut's railroad museums fare during 2020? I read in Trains that a few railroad museums closed permanently because of Co-Vid 19. I hope nothing happened toany museums there. I did see where a few volunteers at the Branford Trolley Museum died of the virus. Prayers to those families and to the BTM staff...

by shadyjay
Sat Apr 17, 2021 2:30 pm
I know that the CT Eastern and the RMNE didn't open at all last year. CT Eastern's web site hasn't been updated in a while but RMNE plans to run trains at some point this year on the Naugatuck Railroad. Danbury was open last summer but closed in the fall due to rising COVID cases. They have yet to announce a reopening. Hopefully all remaining museums in the state (and everywhere) can survive.

Regarding the Valley, we're running an expanded schedule this year... not yet normal, but definitely more trains scheduled than last year. Weekend steam operations May & June, then Thu-Mon in July and August. Dinner trains run pretty much every weekend starting in May. We did run 2 steam engines last weekend, #40 and #3025. We will probably alternate between the two engines throughout the season, with 3025 being the primary right now. Of course this is all subject to change and your best bet is to check the web site for the latest info on the schedule, events, and such. And of course, we have rail bikes running south out of Essex down to Old Saybrook on weekends.

by shadyjay
Wed Apr 28, 2021 4:04 pm
Just an FYI....
Last Saturday, we ran a special train in honor of our departed friend, Lee Carlson (ebtmikado). This Saturday (5/1) marks the start of the regular season of the Valley Railroad / Essex Steam Train, after which steam is running each weekend from now until late October (some weekdays will be added to the mix come July). 2-8-2 #3025 will kick off the season.

by xtcbct
Fri May 07, 2021 9:48 am
I'm sure many are aware of Bob Carlson's passing earlier this year. I understand some folks at the Valley Railroad are trying to do something in his memory? Has this already happened, or is something still planned?

by NaugyRR
Fri Aug 12, 2022 9:14 pm
I thought I'd share this, I booked this evening for my fiance and I. The MBRRE is hosting what looks to be an awesome fan trip on the Valley Railroad at the end of October.

I am very excited for this trip. I've previously ridden the MBRRE's Torrington and Danbury excursions and had a blast. The trip includes rare mileage down to the wye in Old Saybrook, an engine house tour, and a trip north with photo run-bys.
"That sapling that once grew just south of Wassaic may be long gone, and the Harlem Line’s appearance may have changed over the years, but for decades to come, I can count on it continuing to provide me with funny recollections"

by NaugyRR
Mon Oct 31, 2022 11:22 am
The MBRRE Special was yesterday and was huge fun, I haven't smiled that much for that long in forever. Both the Valley and MBRRE crews were spectacular and incredibly friendly and the weather was absolutely beautiful. My fiance and I had a great time riding and taking pictures, and the shop tour and cab visit was great. Thanks so much to any Valley and MBRRE members on here for a great day yesterday! 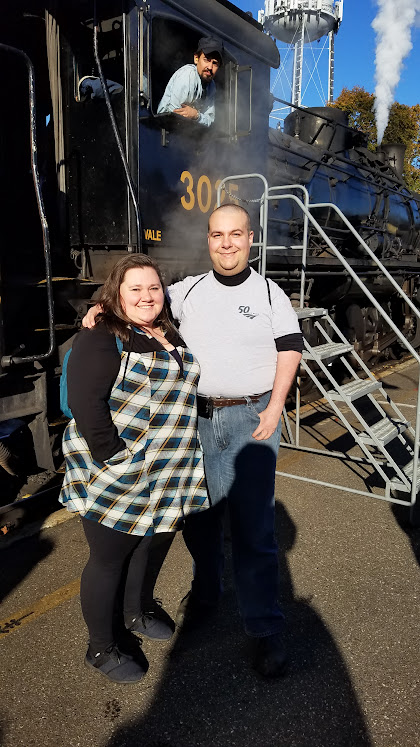 "That sapling that once grew just south of Wassaic may be long gone, and the Harlem Line’s appearance may have changed over the years, but for decades to come, I can count on it continuing to provide me with funny recollections"