@ Dogbert: On the page of my site that you reference, I reference the reconstruction of that segment of trackage to New York City Economic Development Corporation's Sunset Park Vision Plan: 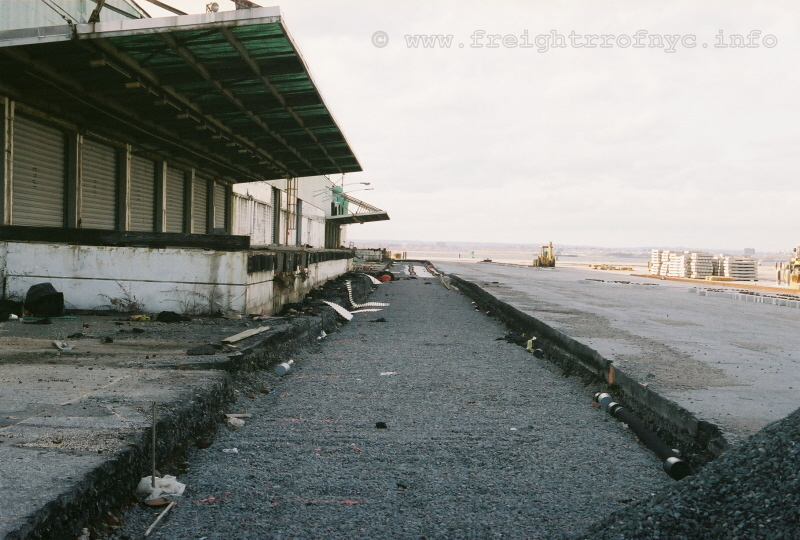 Whether this reconstructed spur / siding will be be serviced by SBK or NYNJ remains to be seen, but my money is on NYNJ.

The reasons for either of the following plans is to eliminate the curves at First Ave / 41st and Second Ave / 41st (under the corner of the warehouse). This trackage still exists but has been removed from service and will be removed all together when the First Avenue connection is installed and streets are resurfaced. 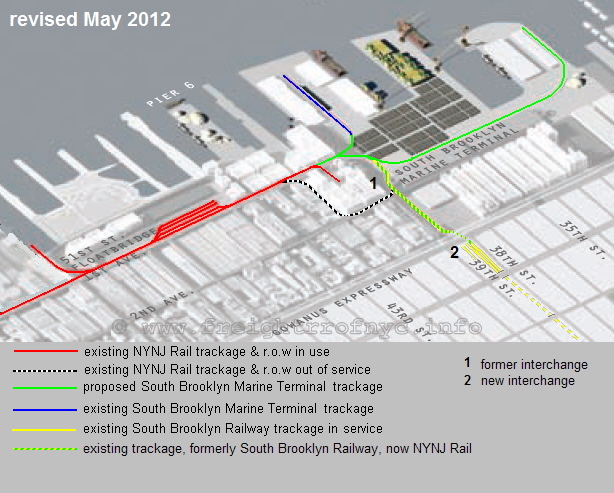 Notice the current SBK 39th Street Yard is not park of the plan.

Another plan I've seen (but can't find where) and dated ca. 2003; is to reorient the 39th Street Yard (currently SBK) from east/west to north south. A track will be laid from First Avenue and 41st Street north up First Avenue into this new yard.

I drew the following from memory, so please don't hold it to 100% accuracy: 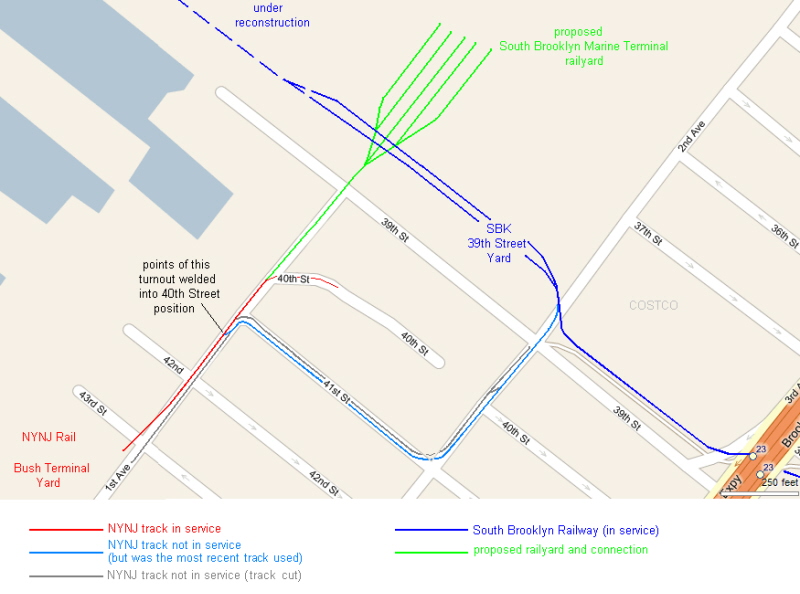 The Vision Plan includes new measures to promote the movement of goods by rail, which is an efficient, economical and sustainable mode of transportation increasingly attractive to industrial businesses. Later this year, the City will begin Brooklyn waterfront rail improvement projects, including the construction of rail freight infrastructure at the South Brooklyn Marine Terminal. The City will also invest $9 million to make upgrades along 1st Avenue that will allow larger, modern railcars to connect to the terminal. The City is also working to improve the reliability of rail service to local customers. By introducing rail service and promoting the movement of goods by rail and barge, the Vision Plan would result in 70,000 fewer truck trips and 5,000 fewer tons of CO2 emissions citywide every year. In addition, several of the large-roofed industrial buildings at the Brooklyn Army Terminal and Bush Terminal will be fit out with solar energy capabilities that will significantly mitigate emissions and reduce energy costs.

That proposal I saw dated 2003, if I remember correctly has the new yard under the operational control of NYNJ and will be used for intermodal as well.

I don't recall reading about SBK still having access? If so, I'd like to see how engineers design SBK's access to the new orientation as well as the track that is currently under reconstruction.

BTW, the track (in turquoise) currently up 41 St and on Second Ave to the SBK interchange is in extremely poor shape. I saw broken rail, and height differences at joints as much as 3-4 inches.

The following diagram is dated 2003, but included in the November 28, 2007 presentation by New York City Economic Development Corp (NYCEDC), to ASICMA on "Infrastructure in New York City"

Note the currrent SBK 39th Street Yard is shown as "park" (green) and the new railyard connecting with NYNJ at First Avenue runs north/south from 39th Street to 35th Street.

Also, this diagram does not show the spur to the Marine Terminal Pier Shed which is currently under reconstruction. So, it appears that aspects of this proposal were not acted upon. 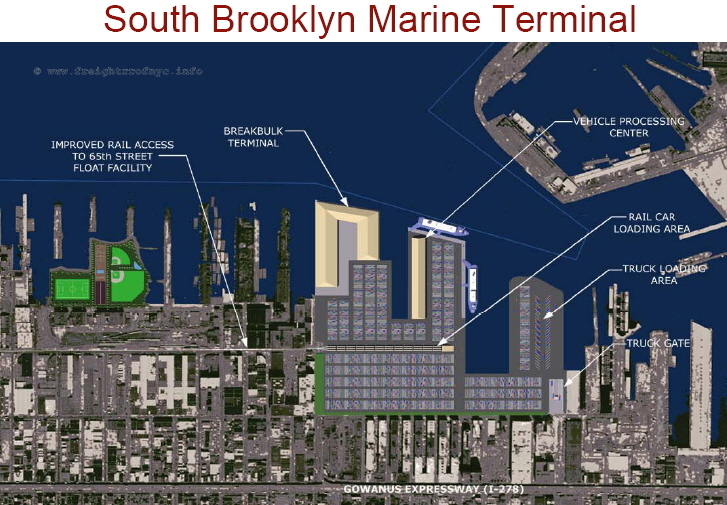 by hrfcarl
Fri Feb 05, 2010 1:43 pm
Great stuff Phil. Did this proposal have anything to do with the Cross Harbor rail freight study? Some sort of add on?

The Sunset Park Vision Plan though, I feel is completely independant of the CH Study as all of it's graphics, diagrams and proposals come in and 2009 after NYNJ took over.

Quite honestly, I've never seen that study... Anyone have a copy to share or link to?

by DogBert
Mon Feb 08, 2010 7:32 pm
Thanks for all the info, BEDT. I was in that area a few weeks ago and saw no signs of that new siding, and I originally thought they were going to take down that entire warehouse. I'm really curious to see what will happen here - how they'll connect to the NYNJ tracks... I'm guessing this might be the end for the sbk yard - which was rebuilt and barely ever used maybe 10 years ago? Total waste assuming that's what'll happen.

by freightguy
Sat Feb 13, 2010 11:42 am
This trackage is supposedly for a scrap metal company. Sims Recycling wants to ship out by both rail and barge from that facility. They are located next to Greenville on the otherside. However the rail end maybe awhile off as extending track along 1st avenue has to be completed. Hopefully with a PA backing maybe this project will take off, time well tell!
Signed off

by JoeRailRoad
Sat Feb 13, 2010 4:08 pm
I don't believe that Sims Hugo Neu Recycling is planning to use rail service as I can't find any reference in this document:
Infrastructure in New York City
Presentation to ASICMA
Michael Taylor, Senior Project Manager
November 28, 2007
http://www.asicma.com/visor.aspx?Id=1962&ed=11

The picture on page 11 shows the facility at the foot of 30th Street.

I've just been on the Hugo Neu Corporation web site http://www.hugoneu.com and cant find any reference to "access for barges and will have active rail service".

I'm confused as to who will build this facility. 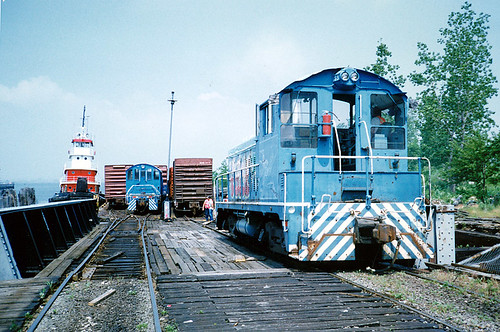 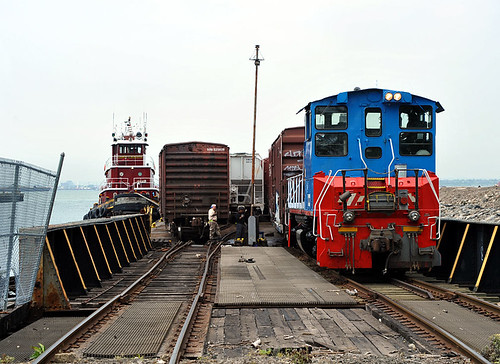