by gasaxe
Thu Jul 30, 2009 8:33 pm
I found this picture online of a NYC streamline coach. I tried contacting the photographer to find out where it is, but he won't return my emails. Does anyone here have any idea where it might be? 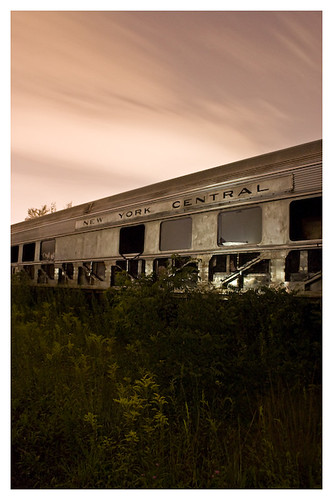 gasaxe wrote:I found this picture online of a NYC streamline coach. I tried contacting the photographer to find out where it is, but he won't return my emails. Does anyone here have any idea where it might be?

I believe this photo is an image of former NYC 10628 "LAUREL STREAM" (later PC 4413 and Amtrak 3202), a six bedroom lounge car built by Budd in 1949, that is/was stored in a rail yard in or near Colonie NY. It may still be owned by the estate of the late Professor Terry Popp who died at least a dozen years ago. The last time I saw this car it was sitting on freight trucks and the carbody and interior were partially disassembled/vandalized. Tim Truscott of the Albany NY area was working to try to preserve the car. I suspect a buyer has never been found. I recall the attorney for Professor Popp's estate had a greatly inflated idea of the car's value at the time, which when combined with the challenges of repair and refurbishment, would have been a big red stop signal to 99.99% of those possibly interested in acquiring the car.

Here is photo of sister car x-NYC 10625 CRYSTAL STREAM also shot from the bedroom side:
http://rrpicturearchives.net/showPicture.aspx?id=542236
Fate has been much kinder to CRYSTAL STREAM than LAUREL STREAM !

by 20th Century Limited
Mon Dec 06, 2010 10:30 pm
If that is the car at Colonie, it's Rapid Stream. It's basically destroyed and I believe the fire dept. cut a hole through the roof responding to a fire.

by TRAINS
Fri Jun 01, 2012 9:22 am
It would be good If we formed a group to save NYC RAPID STREAM rebuild to business car with platform.

by TRAINS
Sat Jun 02, 2012 9:10 am
How may I contact the owner of NYC RAPID STREAM. Anyone in the area to inspect the car? The car appears solid. Any shops nearby for safekeeping/ The car needs a total rebuild.Its' worth preserving our NEW YORK CENTRAL history.Fluting will be replaced with smooth siding. The interior would be reconstructed to a business car plan.

by traingeek8223
Thu Jun 14, 2012 11:07 am
This car is a gonner. The lack of trucks and two fires have sealed it's fate. I does however contain good parts that can be used to help restore other cars. It's a hard pill to swallow but in order to suceede in the world of preservation you have to accept the fact that you can not save everything. There are more worthy projects than this one. Like the D&H "Worlds Fair" coach at the other end of the line.

In regards to inspecting the car, DO NOT enter the property without going through the proper channels with Candian Pacific. They are patrolling the area more than ever.
Matt Giardino
ALCO Historical & Technical Society

TRAINS wrote:It would be good If we formed a group to save NYC RAPID STREAM rebuild to business car with platform.

How many millions do you have? Besides, these kinds of cars did not have open platforms. You wouldn't be saving the "Rapid Stream," you'd be making your own frankenstein car. But, hey, it's your money.

Otto Vondrak wrote:That car's a goner, but let's save the NYC letterboards for something!

I still want the letterboards, BTW

by traingeek8223
Sun Jun 17, 2012 5:52 pm
We will see what happens when the car's day of judgment comes, but I'm willing to bet the letter boards won't go to scrap. Where they end up lies in the hands of the preservation gods (hopefully not the devils of vandalism).
Matt Giardino
ALCO Historical & Technical Society

by TRAINS
Wed Oct 24, 2012 7:52 am
Any news on RAPID STREAM? I owned a BUDD NYC sleeper lounge car as well a PULLMAN 6dblounge. To Otto Vondrak NYC 10630 RAINBOW was converted to a business car in MEXICO with a platform.FNM 4967 EL CACHANILLA exNDEM 5008, NETZAHVALLOYTL exSBC6002, nee-NYC10630 RAINBOW STREAM.