Let's not forget Elberon either.

You can't fix stupid, but stupid eventually fixes itself.

by transit383
Wed Jan 27, 2010 7:47 pm
If you have the time and patience to deal with Historic Aerials (great site, but not very fast), then you could get old aerial views of some of these old stations.

For example, this link shows Brielle Station circa 1940.

Does anyone know when Brielle officially closed? Later views on Historic Aerials don't show much of a station, and by 1957, the area is overgrown.
But where were they going without ever knowing the way?

by GSC
Thu Jan 28, 2010 12:42 pm
Don Wood's NY&LB book has details on Brielle. Interesting story: Money was missing from the till on a regular basis at Brielle, and the agent was fired for theft. When the station was torn down, shredded money was found in the beams and joists, stolen by rats and mice to make nests. The agent was paid back pay from the time he was fired, several years worth!

Avon closed after 1963. It was so close to the Belmar station, it became a skip-stop station, used sparingly during commuter runs. I lived next to the old Sylvania Ave. wooden bridge back then, and loved to watch the eastbound trains getting started from Avon. Nothing like some diesel exhaust blasts standing on that bridge!
They tell me to act my age. I don't know how to do that. I've never been this old before.

This station was also pressed into service in the winter of '77 to '78 when the Manasquan River drawbridge was being rebuilt.
During this period, buses served Bay Head, Point Pleasant, and Manasquan, and train service ran to and from Sea Girt.


Avon By The Sea has an interesting footnote, as it was dropped as a passenger stop all together around 1974, along with North Asbury Park, but had peak hour service restored for a time in the early 1980's.

by GSC
Thu Jan 28, 2010 3:15 pm
The Avon station building itself was gone by the late 60s, I think, when the new municipal building was built. That became the "station", with a gravel apron at trackside, a driveway and parking spaces between the building and the rails.

The original CNJ-style station was pretty big, as I recall, with a freight room attached.
They tell me to act my age. I don't know how to do that. I've never been this old before.

Conrail8124 wrote:Matawan -
Matawan was to the CNJ what South Amboy was to the PRR. The station was built in 1875, the same year the NY&LB opened to Long Branch. The CNJ once had branches to Freehold & Atlantic Highlands which left the main line from here. There was also a freight yard. NJT replaced this building w/ an ugly square looking station in the 1980s & that was replaced the generic high level platforms in the early 2000s 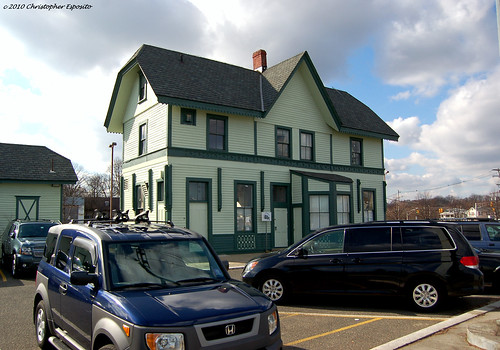 Considering I was at Abeerdeen-Matawan a couple weeks ago for photography, I can say that thing may be in the condemned department unless someone comes and saves it, because there's signs saying the building is unsafe. 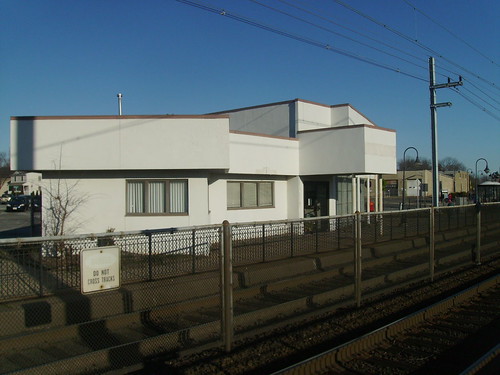 When I was a kid I was told the old matawan station was built as a temporary station. Until the 90's or so it had a 'wrap around porch' sort of overhang that extended to the freight shed. But it literally began falling off at some point. I believe its on some historic register or something that keeps it from being torn down.

The 'new old' station was also temporary (and ugly as sin) but I think its now the office for the parking enforcement department for the town so they won't tear it down.

Conrail8124 wrote:Woodbridge station is the first station of the after leaving the NEC & although some people don't consider the NY&LB to begin until Perth Amboy.

I'm one of those who think that Woodbridge, Edgar, and Genasco (GENeral ASphalt COmpany) stations are on the Pennsylvania RR's Perth Amboy & Woodbridge Branch. I don't know if it was ever an independent railroad.

Conrail8124 wrote:Woodbridge station is the first station of the after leaving the NEC & although some people don't consider the NY&LB to begin until Perth Amboy.

I'm one of those who think that Woodbridge, Edgar, and Genasco (GENeral ASphalt COmpany) stations are on the Pennsylvania RR's Perth Amboy & Woodbridge Branch. I don't know if it was ever an independent railroad.

The Perth Amboy & Woodbridge was a "paper" railroad chartered by the PRR to run from Rahway to Perth Amboy. The line originally terminated behind the Grammar School near Barracks Street in Perth Amboy.

The big railroads applied for incremental grants for tax benefits and to make it easier to deal with the municipalities they were to traverse (sometimes getting the municipalities to employ eminent domain to clear the ROW so the big RR wouldn't have to pay out big $$$). But the PRR built and operated it from the get-go.

The PA & W was a new jersey corporate entity for taxpaying purposes. The legal address of the railroad was Exchange Place in Jersey City with an alternate address c/o the PRR in Philly. Here's a filing from 1899:

Note the balance between passenger and freight revenue. Scroll down in the book excerpt to see some other road names that you may never have heard of but have probably ridden on. The Raritan River Railroad is listed in there as well.
"Sewaren, Sewaren. Next stop is Barber, then Perth Amboy."

by stroudsburg99
Wed Dec 19, 2012 6:01 pm
Does anybody have any photos of the station in asbury park on main street that was torn down i believe in 1987 or any information i found one photo last year of it being torn down now i can't find it the only image i got of it is a old postcard which i attached
You do not have the required permissions to view the files attached to this post.

NY&LB wrote:Just in case you didn't know...it is said that the Asbury Park station was the "model" for the Lionel #115 station.
http://www.tcaetrain.org/articles/chron ... index.html

Yes i knew that , that seems to be the only information i can find right now its almost as if the station never existed

by GSC
Sun Dec 23, 2012 10:26 am
Don Wood's "The Unique New York and Long Branch RR" book has some nice shots of the original Asbury park station (that matched in design to the Red Bank and Matawan buildings) and the "Lionel" version.

Some places where stations existed can be found quite easily. Como, Deal, and West End/Hollywood locations fairly scream that there was a station building there at one time.
They tell me to act my age. I don't know how to do that. I've never been this old before.