by Drewby27
Tue Dec 06, 2022 8:40 am
I've heard from several people that live in Groveton that NHCR was looking at maybe starting a Scenic train and then eventually a passenger train for travel... Again they're probably all rumors but it would be super cool to see a train go through once in a while instead of once every 10-12 months or so... 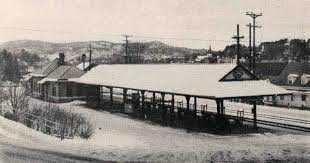 by NHV 669
Tue Dec 06, 2022 9:13 am
And would also require an NHCR pilot, let alone a likely inspection of the tracks and approval from NHDOT again.

Then there would be the issue of having nowhere to run the power around between Whitefield and Fabyans without having it awkwardly run at both ends.
Avatar: NHV 669 at the south end of the "Pompy" in White River Jct., VT on 4/29/1993. Photo by Richard Roberg.

Drewby27 wrote: ↑Tue Dec 06, 2022 8:40 am I've heard from several people that live in Groveton that NHCR was looking at maybe starting a Scenic train and then eventually a passenger train for travel...


I've never heard any such rumors, sounds like someone playing make believe.
They have one spare lease unit, no passenger cars or the extra staff needed for such an operation, and operate on a pair of disconnected lines that mostly go through the middle of the woods at 10 mph.

A passenger train to travel where? They don't connect to anyone but the Conway Scenic and SLR (who is freight only), would have nowhere to run a locomotive around between Lancaster and Hazens, and would simply be a weak competitor to an already established operation. Let alone the fact that Groveton to Whitefield would be a half a day trip.
Avatar: NHV 669 at the south end of the "Pompy" in White River Jct., VT on 4/29/1993. Photo by Richard Roberg.

by NHV 669
Tue Dec 06, 2022 5:40 pm
I had heard a previous rumor of Presby doing something with the remains of the Berlin Branch, and that family has deep pockets; it seems their present focus is on the Cog, and other related businesses/property development.
Avatar: NHV 669 at the south end of the "Pompy" in White River Jct., VT on 4/29/1993. Photo by Richard Roberg.

by Drewby27
Thu Dec 08, 2022 10:18 am
Where would Presby link to the Berlin Branch from the Cog? They definitely have deep pockets and would be willing to spend... I also noticed that they put up new RxR Crossing signs in Whitefield by the dairy bar and Jiffy Mart, Maybe there is something going on with that line that we don't know about?

by NHV 669
Thu Dec 08, 2022 2:13 pm
They wouldn't be connected... I'm talking about two separate ventures. The Berlin Branch train was never more than a rumor. They're actively investing in the Cog as owners.

The two lines once used to connect via a branch from Wing Road that went around Mt. Washington Hotel. That was torn up over 80 years ago.

They probably put up new signs in Whitefield because it's not legally abandoned track.
Avatar: NHV 669 at the south end of the "Pompy" in White River Jct., VT on 4/29/1993. Photo by Richard Roberg.

by Drewby27
Thu Dec 08, 2022 9:08 pm
Are we talking the old Waumbeck Junction tracks to Berlin that connect to NHCR’s line by Cherry Pond? If so I thought those were ripped up?

by NHV 669
Fri Dec 09, 2022 11:52 am
I'm referring to the stretch from Littleton east to active NHCR ops. I never heard any official plans, only that stretch was involved. Now that the tracks are gone from Littleton, that obviously isn't going to happen.

by Drewby27
Fri Dec 09, 2022 1:34 pm
I knew about the tracks at Waumbeck Junction that's why I was confused... The tracks to Littleton would make sense but wouldn't make sense in regards to having a train go through there... Littleton doesn't have many businesses along the tracks anymore since Hitchners closed.

by Drewby27
Fri Dec 09, 2022 2:18 pm
I know Hitchner was never a rail user, I was just implying that no business in Littleton would have the use for rail service, A passenger train I don't believe would've made any money so it was a blessing in disguise for Presby that they tore up the tracks in Littleton to Wing Road, does anyone know how far they plan on going with the rail removal?

by Who
Fri Dec 09, 2022 3:34 pm
I think Littleton would have supported a heritage operation, it has a walkable downtown, museums, restaurants, hotels and B&B's but it's all irrelevant now. It's only a matter of time before the line into Whitefield suffers the same fate. Yeah, yeah, I get it, the line is not abandoned.... you wait, its coming, we all know it.
Who's on first?