by dedm30junk
Sat Jan 31, 2015 5:14 pm
Was reading Febuary issue of Railpace and it say NYA placed an order for 12 new engines from Progress Rail of Muncie,Indiana. 2,000hp and model PR20C. Did not say when they will be delivered.

by emfinite
Sun Feb 01, 2015 2:54 pm
I've heard a couple different grumblings amongst LIRR and NYA crews about these new engines. LIRR says that they're getting those same locomotives and NYAR is tacking onto the order and NYAR says that they're ordering independently of the LIRR, taking delivery by the end of this year. Not sure what to believe, but I usually believe it when I finally see it. Wondering what will happen with the 38s when the time comes? I'm sure LIRR wants them back badly. During the summer when LIRR track work goes back into full swing, they're usually short 1500s, but they never utilize the 1001s to their potential. The YFD201 crew in Holban always gets a 1500, meanwhile thats a waste of a road unit while they should have a 1001 instead. We will see...

by DogBert
Sun Feb 01, 2015 4:24 pm
Not too surprising since PHL has the same engines out west. Would 6 axles be a problem though getting to some sidings with tight curves?

I'm not sure what LIRR wants with axle power. Getting the 38s back would make good sense for them... but how many big work trains do they really run? It reminds me of when the MTA bought 4 brookvilles for SIRT, to replace 2 small alcos and a GE 47ton.

I also wonder what if anything this means for the long forgotten genset they were suppose to get, which area politicians said was fully funded and then nothing happened. $3M more in taxpayer cash gone into the ether? Love these poli-magicians.

by Backshophoss
Sun Feb 01, 2015 6:17 pm
MN has done well with the GP-35R's as "all purpose" rescue,switching and work train power.
LIRR needs the GP-38-2's to handle the heavier work trains(Ballast and Welded Rail) and plowing the east end of the Mainline(to GY)
and the Montauk Branch out east to MY.
The Land of Enchantment is not Flyover country!

It's not about how many engines are needed on a particular train, it's about the fact they don't have engines to cover the assignments when summer track work picks up. In reality, many work trains they run only need one engine, but they like doubling them up in case one takes a dump or they need one on either end for a quick move to reverse direction without shoving. The welded rail train empty or loaded could be pulled with one or two (usually ends up having 2 on each end). Long ballast trains coming from Pond to the Island should use two. One is always in Jamaica as a protect, they keep one in Holban and one in LIC for switching duties. The RF1 crew usually has two of them as well as the late weeknight work trains out of LIC supporting the East Side Access project. The two 1001s with ASC are out of service and the others usually sit idle except for the Richmond Hill drill job. The 1001s have been very underutilized after the departure of LIRR-run freight operations. Remember, just because the LIRR has about 15 or so 1500s left doesn't mean they're all available for service constantly. I'd estimate they have 9-10 ready for service at any given time with the others being worked on, fueled, inspected or undergoing heavy repair in the Sheridan Shop in Richmond Hill.

by jayrmli
Mon Feb 02, 2015 6:51 am
Doesn't sound right to me. LIRR frowns on 6 axle locos operating over their system.
Check out my website about railfanning in the Northeast!

by DogBert
Mon Feb 02, 2015 3:52 pm
I know LIRR has at least 3 or 4 of those MPs & SWs long term OOS - I just wonder if they need 6 axles for work trains. It's a notable shift considering the smaller engines they've always used.

Metro North was once against six axles too, but that changed over 10 years ago with CP, then csx & P&W only switching recently.

Are there any procurement docs out there regarding this transaction yet? I'll have to look around the MTA site... I'd imagine there's a .pdf somewhere about this.

jayrmli wrote:Doesn't sound right to me. LIRR frowns on 6 axle locos operating over their system.

I wonder why they wouldn't opt for a 4 axle version of the PR30C hmm.

I'm wondering if they'll use the Caterpillar 3516 or 2 Cummins QSK genset option... 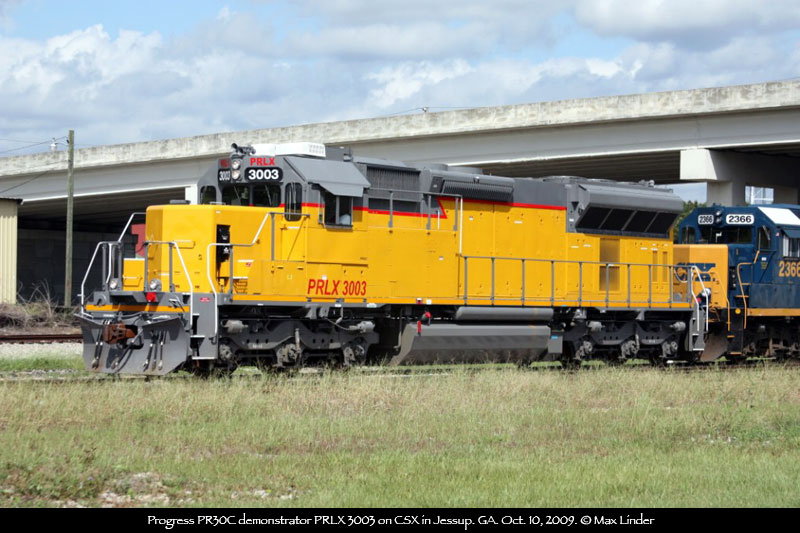 by AlKaLI
Tue Feb 03, 2015 10:15 am
I don't know. I just don't see the NY&A getting six-axle power. I looked on Google to see if there is a PR20B Apparently there is but I have not found pictures for it. "B" and "C" aren't that far apart on the keyboard. Given that the information came via Railpace (aka Rumorpace), will have to wait and see.

A group of 2000-hp, 4-axle gensets seem more likely to me. The NY&A still serves some industries with tight curves as in the Maspeth area.

I could see them using bigger power for the longer trains to the east end, especially when stone is moving, but I don't know where else they'd be worth having. Maspeth definitely wasn't built with 6 axles in mind. Bay Ridge at one time hosted 6 axles, but that was long ago with NH's electrics. The Bush has some beat up looking track, but the grade requires 1 1000hp loco per 5 cars. It's not uncommon to see all 3 sw1001s down there. They could save a lot of fuel with something bigger.

Probably not the most reliable publication for valid info. All the NYA power since inception in 1997 and 4 Geeps in April 1999 is leased from the LIRR. Only the 156 I believe they own outright. I'm assuming when LIRR retires the MP15ac work train fleet NYA's will have to come off lease. I wouldn't be suprised of a joint procurement order with NYA/LIRR if they intend to keep that arrangement of just leasing the motive power from the LIRR.

Unfortunately Metro North's EMD 101-106 GP35R fleet is currently bring rebuilt by Brookville locomotive. The 105 has already left and is there being rebuilt. Hopefully when it's time for a new work train fleet LIRR will stay away from this builder.
Signed off