by Head-end View
Sun Sep 13, 2020 7:05 pm
In that photo I'm surprised to see automatic gates and lights in Mineola during the steam era. At Hicksville most of the crossings still had hand-cranked gates and watchmen on duty until the elevation project in the 1960's.

by scopelliti
Mon Sep 21, 2020 9:13 pm
I know some folks around here have been inside Nassau Tower (i was too but forgot one key point). We've seen two possibilities for the interior stairs. One is along the south wall, the other at the west end. Which is right?
Pat

scopelliti wrote:I know some folks around here have been inside Nassau Tower (i was too but forgot one key point). We've seen two possibilities for the interior stairs. One is along the south wall, the other at the west end. Which is right?

Along west wall. Original toilet was beneath it. At top of stairs a little to the left was the door and ramp to the sub. If you can see where it was bricked over, that may help your perspective. 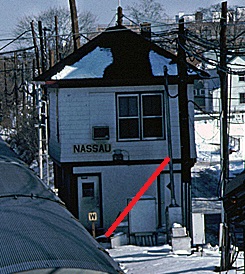 At top of stairs a little to the left was the door and ramp to the sub.

Confused... the door and ramp was on the second floor?
Pat

scopelliti wrote:Okay, so just to confirm, the stairs was where the red line is:

At top of stairs a little to the left was the door and ramp to the sub.

Confused... the door and ramp was on the second floor?

Yes the door at the bottom NorthWest corner led to the bottom of the stairs. You'd immediately turn right and go up the stairs to the second floor headed south while going up.

The other door, at the SouthWest corner led to the lower level.

scopelliti wrote: ↑Fri Jul 10, 2020 2:56 pm This thought suddenly popped into my head... what will the track layout (turnouts and crossing diamond) be with the two track Oyster Bay branch coming off the now three track mainline? One possibility:
Mineola 1.jpg

Don't think I've seen an answer to this post. What is the planned track arrangement?
You do not have the required permissions to view the files attached to this post.
Pat

Crabman1130 wrote: Do you think they will announce the date for the demo?

They may or may not announce the date. The way I see it since the tower is close to the tracks, the line between Jamaica and Hicksville would have to be shut down to allow the demolition. Look for upcoming weekend a Hicksville to Jamaica service outage as a clue
Bill Mangahas (AKA Newkirk Images LLC)
What did the French conductor say after his train derailed ?
Too Loose La Track.

I spent about an hour in Mineola last Friday (March 5) to watch trains and take a look at the ongoing changes to
the station area despite the near-brutal wind chill temperature during the late afternoon. My original plan was
to watch most (or all) of the PM peak rush hour before the March 8 schedule change but the cold prevailed.

I noticed that there was a STOP WORK ORDER posted by the Village of Mineola dated February 16 posted on the
tower and on the east fence along Main Street outside the sub-station. The pedestrian crossing just west of the
tower was still open along with the walkway alongside the tower to Main Street.

UPDATE: Visited Mineola on the afternoon of Thursday March 11. The sub-station is now fully demolished with
most of the brick, stone work and steel removed from the site due to the collapse of the building.
A good vantage point of the sub-station site along with Nassau Tower is from the parking garage next door.
The pedestrian crossing at the tower is now closed to the public since the sub-station building collapse.
The NASSAU signs on both the east and west sides of the tower building are now gone.

BM: There are now three upcoming Saturday Main Line shutdowns scheduled for March 13, 20 and 27 for
the ongoing signal modernization project as Spring begins (officially March 20) for the Third Track Project.
I fully agree with the thought that Nassau Tower's days are numbered at this point...MACTRAXX
EXPRESS TRAIN TO NEW YORK PENN STATION-NO JAMAICA ON THIS TRAIN-PLEASE STAND CLEAR OF THE CLOSING TRAIN DOORS

The tower will be demolished in a morning soon. No outage; no fanfare.