Montana Rail Link (reporting mark MRL) is a privately held Class II railroad in the United States. MRL, which operates on trackage originally built by the Northern Pacific Railway, is a unit of the Washington Companies, and is headquartered in Missoula, Montana. Website: montanarail.com

BN sold the line in 1987 for a number of reasons. These include but are not limited to:

One thing to point out is MRL’s structure. The construction of the Northern Pacific was funded using government-issued bonds which are not scheduled to be paid off until 2047. The NP or its successors are not allowed to sell any part of the railroad whose construction was financed using those bonds, so the MRL mainline is leased not owned. The branchlines, having been built using private capital much later, are owned. Most thought that when those bonds are finally paid off in 2047, MRL would either buy it's mainline outright or sell to BNSF. So this came as quite a surprise to everyone.

Now of course why would MRL sell and BNSF buy now?

For one thing, Dennis Washington, owner of MRL, is 87 years old. He might want to cash out on his railroad so he can spend his remaining years in relaxing splendor. MRL is extremely profitable. While we don’t have exact figures, we can be sure it generates a profit of over $500 million. We know this because back in 2020 MRL had the STB raise the Class I profitability threshold from $500 million to $900 million. MRL easily fetches a price of $2-$5 billion.

BNSF can easily afford MRL. Mr. Buffet is BNSF’s owner after all and he could easily afford to buy the entire railroad industry and have plenty left over. Now, despite having sold the railroad, BN/BNSF never truly packed up and left. They kept haulage right to facilitate the movement of trains from the Upper Midwest to the Pacific Northwest. Anything that can’t go over the ex-GN line though Northern Montana goes via MRL. The number of BNSF haulage rights trains has steadily increased over the years and now they account for the vast vast vast majority of trains polishing MRL rails. BNSF sends between 25 and 30 trains a day over MRL, accounting for 90% of traffic over the line.

Taking back control of MRL also makes sense when you put today’s stressed supply chains into view. BNSF now fully controls one of its key mainlines. Having to stop and “change railroad” so to speak will always slow down travel time and make it harder to grow traffic. It’s why railroads stress single-line service as much as possible.

So in conclusion, Mr. Washington realized that MRL wasn’t what it used to be and could snatch a pretty penny from Mr. Buffet, who was willing to buy, and the two made a deal. 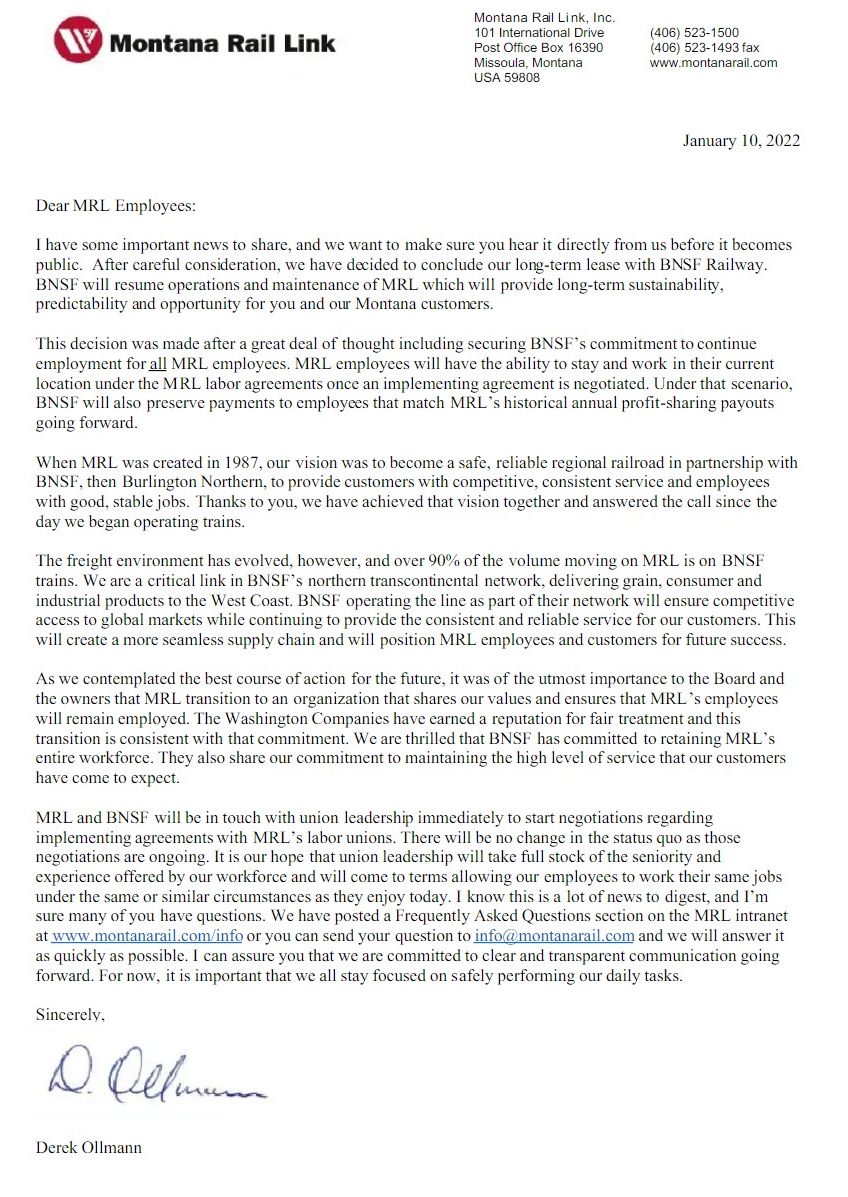 You should have stopped right there; this was never more than a long term lease.
Casey
Avatar: NHV 669 at the south end of the "Pompy" in White River Jct., VT on 4/29/1993. Photo by Richard Roberg.

Yes, leased. That is what I meant. Should have proof read beforehand. The rest of the post communicates that the mainline is leased while the branchlines are owned. This is due to some legal technicalities that stem from the original government bonds that were used to finance the Northern Pacific.

It is a long-term lease but MRL would have had the chance to buy the line outright when the NP bonds are paid off in 2047; however, It was common option that come 2047, BNSF would simply take the lines back rather than sell them.

My post was more about why is this happening 25 years early and what I think the motivations behind it are. The simple fact is that 90% of MRL's traffic is BNSF haulage rights trains. MRL really has no reason to exist anymore separate from BNSF. Dennis Washington could use that money for his retirement or other ventures and BNSF can make far more money operating the line themselves.
Barbecuing in Chessie's backyard. Host of "Shortline's Rail News & Comment."

MRL as a non-signatory Amtrak operator would have been a much different set of negotiations than BNSF as a signatory. Amtrak would have paid more in access fees prior to this.

by Engineer Spike
Thu Jan 20, 2022 10:29 am
When NP lines were leased o MRL Hunter Harrison was the VP Operations. He made many cuts across the system. I believe he was behind getting out of the NP. Back in 1987 BN was just getting back on its feet following the early 1980s recession. I believe that they were still in cut mode. Just as an example of how BN was coming out of tough times, my former CB&Q seniority roster had a big gap in hiring between about 1979-80, through to the late 1980s. Some guys that I worked with both in Aurora and Galesburg were cut off. Many bumped into Wyoming coal fields for the interim.

by RRspatch2
Fri Feb 04, 2022 12:57 pm
Now that BNSF is taking over the MRL I wonder what the future is for the MRL dispatchers. Will they stay in Montana or will they be moved to Fort Worth? The BNSF did close the Kansas City office and there have always been rumors of them closing the Houston (Spring) office. Moving them to Fort Worth therefore would be a possibility. I can't remember if the MRL dispatchers are ATDA or not.

by vermontanan
Sat Feb 19, 2022 12:06 am
Initially (1987), the MRL dispatchers were unionless, but they did join the ATDA. Given that BNSF is short of train dispatchers, I would place the chance that the Missoula dispatchers would NOT move to Fort Worth at near zero.
--Mark Meyer

Engineer Spike wrote: ↑Thu Jan 20, 2022 10:29 am When NP lines were leased o MRL Hunter Harrison was the VP Operations. He made many cuts across the system. I believe he was behind getting out of the NP. Back in 1987 BN was just getting back on its feet following the early 1980s recession. I believe that they were still in cut mode. Just as an example of how BN was coming out of tough times, my former CB&Q seniority roster had a big gap in hiring between about 1979-80, through to the late 1980s. Some guys that I worked with both in Aurora and Galesburg were cut off. Many bumped into Wyoming coal fields for the interim.

This is basically true. In the 52 years since the BN merger in 1970, the segment of the railroad that became the MRL has never been able "to be itself." Following the 1970 merger, BN was preoccupied building new and consolidating old infrastructure to capture the efficiencies of the new railroad. Then the coal boom hit and that preoccupied BN (and took most of its capital) through the remainder of the 1970s and 1980s. By the 1980s, traffic was still not where is should have been and the mindset was "our whole railroad is for sale." (If you think MRL was bad, just imagine what Winona Bridge would've created.) BN wanted to get rid of the torturous ex-NP line in Western Montana, but didn't want to spend any money (i.e. upgrade the less-costly route via Great Falls and Shelby) in doing so. Therefore, with the creation of MRL in 1987, the "new" railroad was guaranteed traffic for the duration of the lease. This has skewed how traffic has been routed for 35 years: Trains which would be best not going that way went that way, and BN/BNSF was hesitant in investing in the route through Great Falls because in a downturn in the economy, it still had to accommodate the MRL traffic quota. Rob Krebs made a run at getting the MRL back and spent millions on capacity upgrades on the Laurel-Sandpoint route via Great Falls in the late 1990s, but a downturn in traffic and the cost of obtaining the MRL meant that not all planned upgrades came into fruition. Since then, MRL has added yard capacity at Laurel, Helena, and Missoula. But Bozeman Pass, Mullan Pass, and Winston Hill remain substantial obstacles for heavy westward unit trains which could operate helper-free via Marias Pass.

Still, after spending billions to accommodate traffic during the Bakken Boom in 2010s, I doubt that BNSF has any appetite for additional capital spending, and with coal traffic on the ex-NP line east of Billings likely to decline dramatically in the next 10 years, BNSF probably will elect to move some transcontinental traffic on this route rather than relegate it to what Matt Rose called "stranded assets" status, even though a routing via what is now the MRL is longer, steeper, and slower.