Milepost. The clarification and discussion

Milepost. The clarification and discussion

by workextra
Sun Oct 03, 2021 10:03 pm
Hi all. I would like to present a discussion regarding the milepost.
As this topic should be documented before it is lost to history.

Correct me if I’m wrong. However I do recall reading in the charter that LIRR was to build a branch to Sag Harbor.
Therefore based on the milepost in the field today. Barring any potential repositioning that I am unaware to date.

The LIRR built a line from Manorville (MR) MP-65 to Eastport (PT) MP-69 this line would later be extended to Sag Harbor MP 98*
Prefix unknown? Was it “S” or possibly “M”?

When the LIRR acquired the Southern Road, they would take a curvaceous route extending the Southern road from their MP 66 at Center Moriches to LIRRs Eastport which for some reason is Milepost 67 and 68.
Was this route picked deliberately to add mileage so as to make the miles conform at PT- MP-69.

I would like to square this issue away and work our way west. Covering the centrals mileage (current) and historic overlapping the current.
The .7 mile Discrepancy on today montuak in mile 13
West of Springfield Jct.
As well
As the southern roads MP0. Bushwick, Later LIC?
As well
As the 3 MP-9s in Jamaica, .7 of a mile between the furthest 2.

Please try to keep it going East to West.
Thanks

by C-LINER 2001
Sun Oct 03, 2021 10:16 pm
Workextra, Good post, my brother Don who worked in Engine Service on the LIRR told me the Mileposts on the Montauk are not consistent, this is going to be good.

by workextra
Sun Oct 03, 2021 11:35 pm
Yes C liner,
In the timetable the mileage doesn’t conform for various reasons to be discussed here.
I would like to solve the PT debate.
Then work wrest.

Briefly. The issue with the “Montauk”
Not conforming today has to do with the fact that east of Jamaica it’s mileage is measured off the mainline through Mile 13. This mile is 1.7 miles in length when it aligns with mile S-14 at Hook Creek Blvd east of Rosedale.

However if you measure your mileage to montuak via the “Atlantic” (original southern main) it measures spot on the money!
This is measuring from the S-9 milepost that used to be south of 8 track by the escalator area of the current platform D.
Again This ties together with the fact the mainline mile No. 9 is .7 mile
West of there by the Mail Dock signal
Bridge.
The line between the Hillside viaduct (Rockaway Jct) and Springfield curve (Jct) was LIRRs cut off to Far rock, therefore it is absolutely not the Montuak branch when speaking about milepost alone. 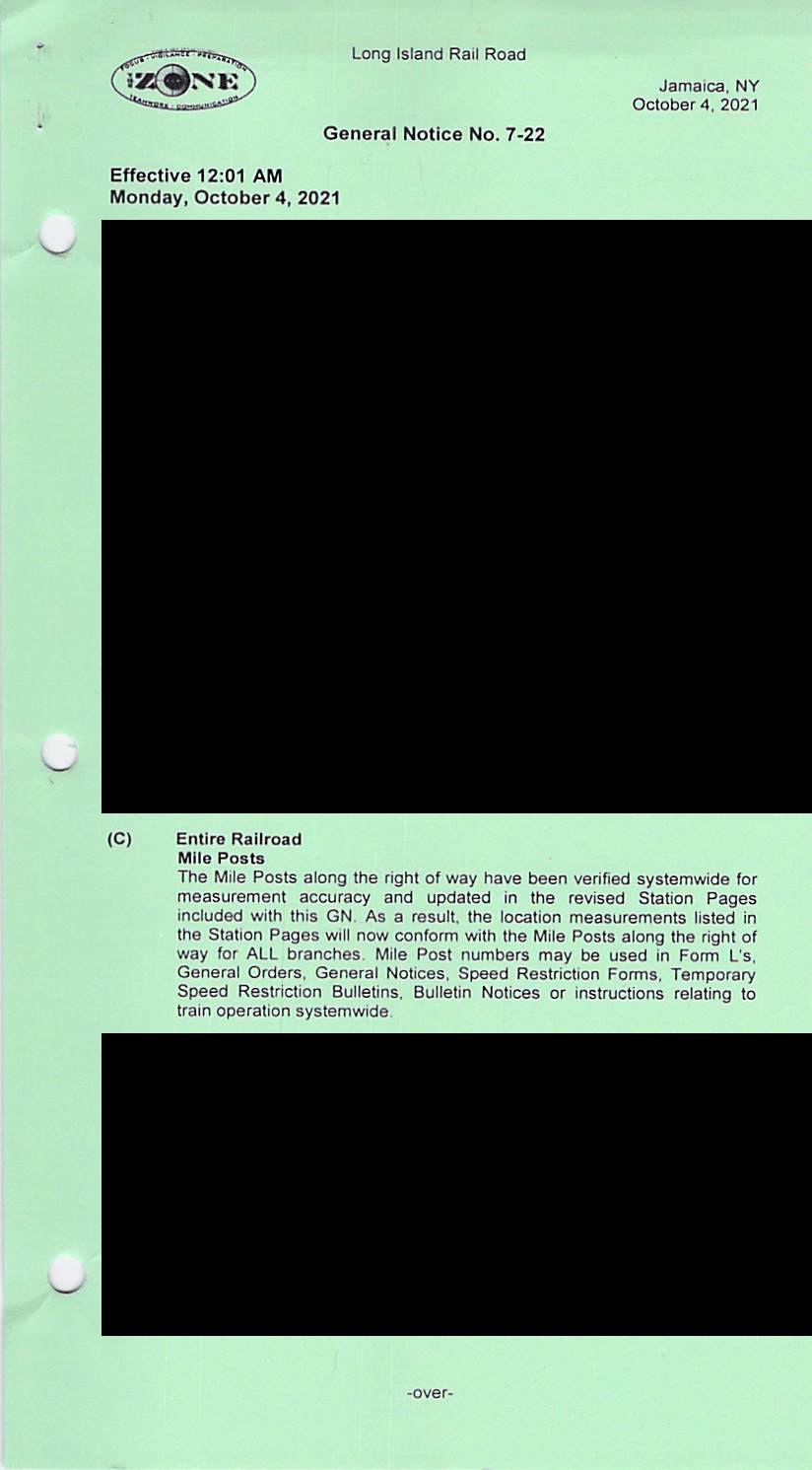 by R36 Combine Coach
Mon Oct 04, 2021 10:27 pm
Must be quite some classified or sensitive information there to be redacted.
Since my friend continues to chain smoke nonstop, she is probably an Alco.

by Kelly&Kelly
Tue Oct 05, 2021 5:11 am
So the Station Pages' mileage numbers were revised, or the mile posts moved? I doubt any posts were moved. It would upset way too many things.

by workextra
Tue Oct 05, 2021 9:39 am
Some Milepost in the field we’re replaced where missing (not all)
Not all defaced specimens were restored yet.
How ever they did revise the milepost on the LIRRs former rockaway cut off (TODAYS MONTAUK) between Springfield and hillside to reflect the mileage in a possibly in westward direction form S-14 west through S-10 by the hillside viaduct.
Note however I have observed here is their location of MP13 is still further east than the same on Atlantic (original montuak) On The Atlantic 13 is just west of Laurlton, on the “Montauk” it’s east of Laurlton if you were to run the 2 branches side by side. This is very visible and may be because I’d the following huge mistake!

Someone in their infinite winsome renumber MP10 (G-10) in Hall as (S-9)!!
This is completely incorrect. As the mainline mileage has nothing to do with the mainline Montauk mileage.
So now the mainline is missing completely a written mile! Goes from MP9-MP11 no MP10!!
By the book there should be a mileage designation on the signal bridges in hall on the “Montauk” tracks to indicate that those tracks are MP9.x
The new generation oblivious to this blunder and don’t care.

by Kelly&Kelly
Tue Oct 05, 2021 4:49 pm
There will be some problems here. As you know, road charts, valuations and track records rely heavily on milepost locations.

It is for that reason that federal legislation is required to amend the location of a railway mile marker. The LIRR tried going down this route in 1982 and was stopped dead in its tracks.

If some noob though he could just move mileposts and change their numbers, he best get ready to be bitten big time.

by workextra
Wed Oct 06, 2021 1:10 am
It is here on this topic that I am trying to clarify some issues regarding the milepost. See the OP
That said. What they did now is interesting but how did they do it?
They deleted mile 10 from the main line by renumbering milepost “10” into “9” for their Montuak branch mileage, which is still incorrect between Springfield gardens curve and Hall.
There was milepost 9s in
G-9 by the mail dock SB
A-9 south of and opposite Jay tower
S-9 by where the stairs from the street came up to platform Level in Jamaica south of track 8 (since removed)

The only way to correct this is to get approval to:
allow mile 8-9 be mismatched
allow mile 9-10 be mismatched.
This will permit allow all Other milepost to “conform”
I would Like to hear some of K&Ks opinions and some insight on this topic

To fan the flames some more,
LIRR Mileage from white pot to rockaway park would be “correct”
But now throw in the discrepancy form the southern roads route to the rockaways and the loops created.
Similarly with west Hempstead!

by Kelly&Kelly
Thu Oct 07, 2021 8:19 am
The Railroad could do whatever it wishes with the mileposts, subject to federal legislation. It can start at Uranus or The Moon and work backwards if it likes that. Add a couple of zeros to make the place bigger to get more funding?

But legislation has to be written and passed in Congress and The Senate that modifies the mile markers.

That has not been done.

It's common for the Company to claim exemption from virtually every law and regulation based on its State ownership as a "political subdivision." That usually doesn't work where rail operations, safety or labor matters are concerned. Then a scramble is launched to revert back...

The ramifications of confusion in maintenance planning, compliance reporting, property recording and accident reporting - to name a few - are profound. One more example of a "whatever sounds good to me" mentality overriding history, judgement, knowledge, research and fact.

Hey, maybe they'll get away with it.

A sidenote to this nonsense is, as WorkExtra so succinctly states, that the present inconsistencies are grounded in historic fact and reason. Someone wanting an explanation of "inaccuracies" can easily obtain the valid causes and logic. Interjecting abstract changes for no reason other than "making it look better" makes future understanding and explanation of the newly applied inaccuracies impossible. The world of "Because we say so".

by krispy
Fri Oct 08, 2021 5:18 pm
Never understood why there was conflict over this issue. We still used MP's in orders out in Manual Block to name sidings for work/frt run orders. Out west in areas of "grey area", there were sufficient signal bridges or interlockings to nail down a location for paperwork. I remember having a "vigorous" conversation with a rules examiner during a book and begging the question of it's such a big deal, name the siding in the timetable (Calverton Spur) instead of "first sidetrack switch east of MP 65", so I didn't get carpel tunnel from writing the run order every night.

While I don't know for certain, the PTC legislature and the FRA's drive to eliminate or minimize passenger manual block (without funding it) may have been the motivation for this change.

by workextra
Fri Oct 08, 2021 10:56 pm
It is to my understanding that the confusion/conflict here is the discrepancy in mileage cause by the realignments and mostly the acquisitions of the other properties by the LIRR.
LIRR mainline mileage was correct until earlier this year When someone in the field completely eliminated milepost 10, (G-10) by slapping a “9” on it, calling/making it (S-9)
I frankly believe many are oblivious to this blunder.
The portion of the Montuak branch between Hall, and the Springfield gardens/Laurlton curve is “NOT” the true branch by mileage.
LIRR can correct this by naming section through Locust Manor (today Atlantic east of Jamaic) back to its rightful status as the “Southern Div”- Montauk branch.

Not that the Old Montuak cut off is gone, I’m curious if they can rename the portion of the current Montuak branch between Hall, and the Springfield gardens/Laurlton curve as the “Montauk cutoff”
By definition that’s exactly what it is.
It’s a cut off allowing Southern Division trains the option to bypass the section though Locust Manor.
The better corrects the milepost abs makes them conform with the only deviant miles
Being MP9-10 via Locust Manor
and MP13 (cutoff measured off the mainline) - MP S-14 at Hook Creek Blvd UGB.
Cutoff would be about 3.7 miles long from hall MP G-10 to MP S-14

The blunder here was the stupidity of calling the section of the old southern road the “Atlantic branch”. I understand how it looks on a map, it’s the rightful Southern Division and should be corrected officially.
Though there is probably some reason why someone would
Disagree, or drop the I can’t, We can’t & We won’t-

by Kelly&Kelly
Mon Oct 11, 2021 6:07 am
That part of the Atlantic Branch was often called "The Avenue" by some dispatchers or even, in my day, which wasn't too long ago "The Southern Road".

R36 Combine Coach wrote: ↑Mon Oct 04, 2021 10:27 pm Must be quite some classified or sensitive information there to be redacted.

No, simply blacked out to highlight Section (C) by the poster, as follows: 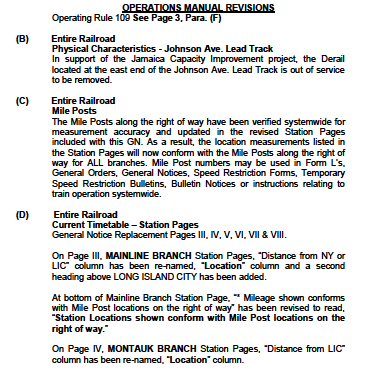