by b&m 1566
Thu Sep 03, 2020 3:41 pm
Slow day a work today and I found myself tracing the old Kineo Branch (aka Pan Am's Madison Branch) up to Moosehead Lake, which has left me with a handful of questions:
1. When was the line north of Anson, ME to Bingham, ME abandon? I assume it was gone before the Guilford era?
2. Was there a railroad spur that went to Bald Mountain Pond?
3. At the north end of Indian Pond, the old ROW has an S curve in it, at the north end of that S curve there looks to be another old ROW that makes a matching straight line with the ROW south of the S curve. Was the ROW relocated or did construction stop on the straight line in favor of the S curve?
4. Does anyone have a track map of Somerset Junction? I can't imagine this was a busy junction but looking at google maps, it does look like it formed a wye with both legs heading in a northerly direction tying into CP's line.
5. Was Rockwood the location of Kineo Station? Assuming it was located about where the town landing is today?
6. Where was the Mt. Kineo House located? I understand this was purchased at some point by the Maine Central.
Quick story: 21 years ago (can believe I just said that), I went white water rafting down the Kennebec River, the rafts were put in at the Harris Station Dam. We had to drive up the old ROW (Lodging was at Great Outdoors, The Forks, ME), to get to the dam.
It takes real skill to choke on air, fall up the stairs and trip over nothing. I have those skills.

by S1f3432
Thu Sep 03, 2020 6:55 pm
1.) The branch was trimmed back to North Anson in 1979 ( re: Maine Central in Color, Vol. 1, 1998 Plant-Melvin )
4.) There is a track diagram of Somerset Jct. on page 207 in Canadian Pacific to the East, 1991 Omer Lavallee.
It shows the station north of the CP main, west of the crossing with sidings on both sides of the CP main west of
the station and connecting tracks between the railroads in the NW and SW quadrants. 5.) A 1917 MEC timetable
reprinted in The Best of Maine Railroads, 1985, Ron Johnson, shows the last two stations as Kineo Station and
Mt. Kineo House. Photos in the same publication show the station and dock on the opposite shore of a body
of water from the hotel- shown in the distance. Looking a topo maps a small bay off Moosehead Lake is at
the southern part of Rockwood which leaves me thinking that the hotel was on the north ( Rockwood ) side
of the bay and the station on the south side with access by boat. Hope this helps.
Greg S

by Cowford
Thu Sep 03, 2020 8:18 pm
A quick Google search pulled up a pic of Kineo Station on the waterfront at Rockwood. By the orientation, it's apparent that the current town landing was the rail terminus as you suspected, 1566. Mt Kineo House was about 3/4 mile by boat (Googlemap "The Oak Lodge, Greenville, ME" to see the location of the hotel.) 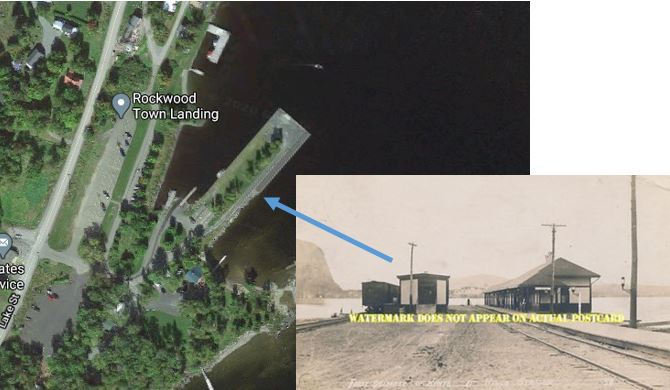 by edbear
Thu Sep 03, 2020 9:14 pm
The Mount Kineo House was operated by the Samoset Company, Maine Central's hotel management subsidiary. Samoset also operated the Samoset at Rockland. The Coburn Steamboat Company operated a fleet of steamers on Moosehead and connected Kineo Station with the Mount Kineo. Coburn's steamers served a number of landings on Moosehead. Through Pullmans were operated to Kineo Station from Boston and New York. I suspect that the Mount Kineo' s clientele was mostly rugged sportsmen up there for the fishing, hunting and woodsy pursuits. It was pretty isolated.

by S1f3432
Fri Sep 04, 2020 5:25 pm
The Wiki page on the Somerset Railroad does mention a Bald Mountain logging branch and also reminded
me of a long out of print book ( Macdougall, Walter Marshall The Old Somerset Railroad (2000) Downeast Books ) that I intended to buy but never did. I've occasionally seen old copies at train shows.
Greg S

Cowford wrote: ↑Thu Sep 03, 2020 8:18 pm A quick Google search pulled up a pic of Kineo Station on the waterfront at Rockwood. By the orientation, it's apparent that the current town landing was the rail terminus as you suspected, 1566. Mt Kineo House was about 3/4 mile by boat (Googlemap "The Oak Lodge, Greenville, ME" to see the location of the hotel.)

Someone Geotagged, where it appears the passenger station stood in the photo you provided. I've never been up there myself but it looks like a place worth visiting.
It takes real skill to choke on air, fall up the stairs and trip over nothing. I have those skills.

by eustis22
Fri Mar 05, 2021 12:49 pm
I have The Old Somerset Railroad (bought fairly recently so it's acquireable). The railroad spur ran east to Austin Lake and then north to Bald Mountain Pond. It left the main "a few miles above Deadwater" (Moscow).

by b&m 1566
Fri Mar 05, 2021 4:42 pm
Any mention of ice harvesting, between Bingham and Rockwood?
It takes real skill to choke on air, fall up the stairs and trip over nothing. I have those skills.