by l008com
Thu Sep 27, 2012 10:33 pm
Hi
I'm looking for pics of the Fitchburg Cutoff in Somerville. Not current day pics, pics when the line still existed and was in use.
I'm especially looking for pics of trains through Davis, and trains around Alewife on the cutoff both before Alewife existed, and especially after it was built, during that short period where the were running trains through there. I've done some googling but I only came up with one single photo of a train going over the "minuteman" diamond.
My YouTube Channel:
John's Train Videos

by Aerie
Fri Sep 28, 2012 7:24 am
I grew up in that area and would love to see some pix too. Trains stopped running when I was about 20, and by then it was just very slow (and very long) freight trains. You could be stuck waiting at the crossing gates for 15 minutes for a train to pass through Davis Square in those days. I don't remember the station (which I guess was next to the Somerville Theatre), but I do remember some sort of tower in the middle of the square where the little park is in this picture. http://binged.it/PvBosn The lights used to be on in the tower at night, so I assume it was manned. I wonder what it controlled, since by then I think the line was all single track from the B&L to the Fitchburg. I also remember there was still a station building standing at one of the crossings, at either Willow Avenue or Cedar Street, I don't remember which. By then it was a laundry though.

by F-line to Dudley via Park
Fri Sep 28, 2012 9:03 am
Couple here from the B&M Flickr photostream of a freight crossing Mass Ave./Cameron Ave. in 1976 with the bicentennial-painted loco: 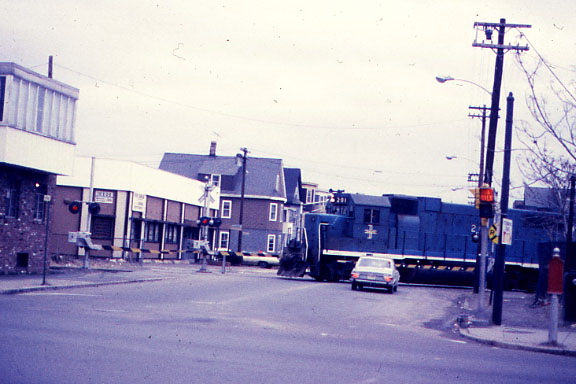 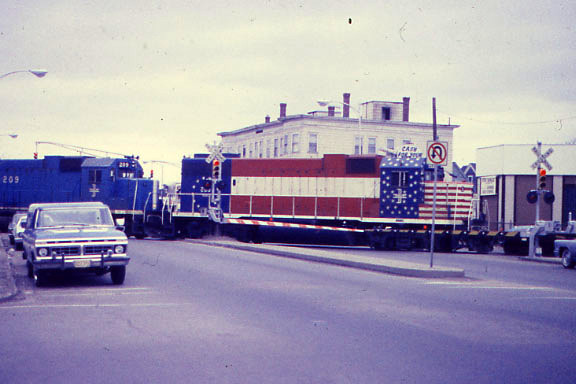 That building housed a crossing tender who controlled the Davis Square crossing gates. It was not a signal tower.

It was interesting attending movies at the Somerville Theater when the line was active because you could feel the noise and vibration from freights going by a few feet from the wall. I lived in Somerville in the late 1970s and shot a lot of photos in those days, but I have very few from the cutoff (and none at Davis) because most freight moves were at night.

by Aerie
Fri Sep 28, 2012 11:41 am
It was awfully big for a crossing tender shanty, compared to the little phone booth-sized accommodations they had at West Medford and Greenwood. It had two stories, was made of red brick, and the upper story was all windows mostly. Maybe it was indeed a tower in the early days, but was only used for the crossing tender later on when the line became less important.

by jaymac
Fri Sep 28, 2012 11:59 am
Here comes the Terminology Police: "Hill Crossing Cutoff," not "Fitchburg Cutoff." It was repurposed Central Mass. trackage from Hill Crossing in West Cambridge to Somerville Junction, permitting IB Fitchburg Division freights easy access to the Boston terminal hump facilities. When the B&M went piggyback, the Cutoff was used by both IB and OB pigs.
"A gray crossover is definitely not company transportation."

by jaymac
Mon Oct 01, 2012 3:30 am
Combo face-palm and self-head-slap...
"A gray crossover is definitely not company transportation."

by matignon82
Tue Dec 18, 2012 6:03 pm
I spent a lot of time in my youth at this crossing watching the freights and switch engines on this line. I think tuesday and thursday the switchers would come down and work W.R. Grace and Fawcett oil. At some time before I was around the first switch into Grace along Whitimore Ave in Cambridge continued across the Alewife Brook Parkway and brook and connected to the Lexington Branch. I remember bouncing over the half buried tracks riding my bike into the woods over there and wondering why they were there. We could ride the trail into the woods there, go under the bridge along the freight cutoff, and then ride the "6 minute" trails behind Arthur D. Little. There were oil tanks where Alewife station is now. We would sit and wait for the out bound Budd Liners on the Lexington to cross the diamond which was right where the access roads to the station cross now. It was always a big deal to see the Budds up close for some reason. I wish I had had a camera with me for some of the hours and days I spent down there.

John Alan Roderick has a great collection of freight cutoff pix. Last I checked that facebook album was public.

Did we ever hear a music sweeter than the one that thrills, as it floats along the Deerfield, as it echoes o'er the hills.
How we watch that little engine as it stalks across the plain; was there ever music sweeter, was there ever sight completer, than the coming of the train?

by l008com
Wed Dec 26, 2012 2:45 am
That's an awesome gallery! Exactly what I was looking for. That guy shoud upload them to someplace more public, like flickr or something.
My YouTube Channel:
John's Train Videos

by newpylong
Sat Dec 29, 2012 8:23 pm
Awesome picts by JAR. At least he was able to capture history... All we see now is a gravel pile leading into the bushes at Somerville Jnct.