by MACTRAXX
Mon Jul 12, 2021 4:36 am
MA90: The pedestrian crossing at Nassau Tower has been closed to the public since the March 9th 2021
substation demolition and though still intact may be removed along with adjacent Nassau Tower at a
date to be determined. This closure was the last at-grade crossing in the 3TC project zone...MACTRAXX
EXPRESS TRAIN TO NEW YORK PENN STATION-NO JAMAICA ON THIS TRAIN-PLEASE STAND CLEAR OF THE CLOSING TRAIN DOORS

by Head-end View
Mon Jul 12, 2021 7:05 pm
I don't think that Second St. crossing in Mineola could be eliminated. It handles a lot of vehicular traffic and there is no reasonable, close-by alternative. Also there is not all that much train traffic on the Oyster Bay Branch and all trains are going relatively slow over that crossing so it's not nearly as dangerous as the main-line crossings were. Converting it to a quiet-zone crossing would be an interesting option though.

by photobug56
Tue Jul 13, 2021 1:34 am
Is the crossing being closed off? If so, I'd have to guess that MTA and Nassau agreed - but one way or another all grade crossings in the area are being eliminated. Whether this one truly merits an underpass I've no idea, but I hear what you are saying. But one way or another, no grade crossings on active lines in Nassau anymore. Too many delays, crashes, suicides, the works.

by njtmnrrbuff
Tue Jul 13, 2021 6:30 am
There will still be many grade crossings on other LIRR Lines in Nassau County, even on the Oyster Bay Line in Mineola. As part of the third track Main Line project, all of the grade crossings between Floral Park and Hicksville Stations are history. With more and more trains that are supposed to run on the stretch of the Main Line between Floral Park and Hicksville, people who are travel across, over, and under that right of way do not want to be stopped over and over for trains. Presently 40 percent of the LIRR trains run on the Main Line between Floral Park and Hicksville and something tells me that after the third track opens up, that percentage of trains will increase. With the elimination of grade crossings on the Main Line, hopefully that will reduce the number of crashes, suicides, which have all lead to train delays.

by MattAmity90
Tue Jul 13, 2021 2:01 pm
I'm guessing that the signals, gates, and other components of the Mineola pedestrian grade crossing will be history when the new Platform B is cast to that point near the pedestal signal, or unfortunately when NASSAU has to go? 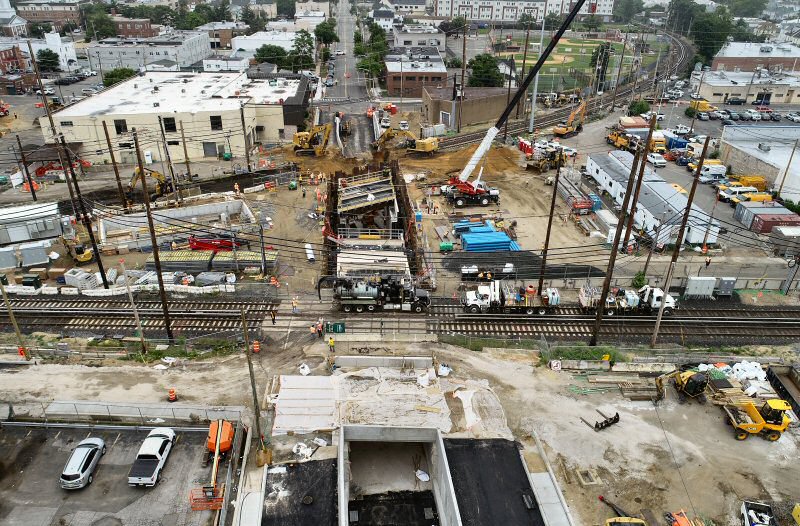 by west point
Thu Jul 15, 2021 12:14 pm
The pictures at Mineola brings up a question. The roadway bridge beyond the new platform seems to have an extra column just beyond the new platform . If that extra column could be replaced the platform could have set back if LIRR every wanted to make this station a complete 4 main tracks why not have the possibility of 4 main tracks into the plans for this station as well as others ? That would be part of bridges, underpasses, and grade crossings.

by MattAmity90
Thu Jul 15, 2021 1:47 pm
There is absolutely no way that a fourth track could have been added at Mineola even without the Mineola Blvd. pier. Think of the space both West and East of the station. My prediction for Willis Avenue to reopen to traffic is sometime next month, because the trend has been that about 4-6 weeks after the box-tunnel bridge is pushed into place the road reopens. New Hyde Park Road was a prime example: Span pushed into place on the weekend of July 9th-10th, 2020 and opened up on August 24th, 2020.

Edward posted photos from Westbury, and construction has begun by closing the entire Western half of the station, and placing temporary platforms connected to the Eastern halves. All of the original wooden power poles have been chopped, and some have been removed. The entire stretch between Carle Place and Westbury has the new erector set poles with new wooden poles in between.
This station is Babylon, this is the train to Penn Station. Stopping at: Lindenhurst, Copiague, Amityville, Massapequa Park, Massapequa, Seaford, Wantagh, Bellmore, Merrick, Freeport, Baldwin, Rockville Centre, Lynbrook, Valley Stream, Jamaica, Kew Gardens, Forest Hills, Woodside, Penn Station.

by Pensyfan19
Thu Jul 15, 2021 2:37 pm
Considering how busy this main line is, especially with the potential of Amtrak eventually coming onto Long Island, I wouldn't be surprised if someone proposed installing a fourth track on the main sometime in my lifetime.

In the meantime, temporary platforms are now up at Westbury as of Monday, and station improvements are now underway for the last station to be upgraded on the main line.
"Look down, step over, and watch the gap!" - Dr. John Clarke, The Gap Rap (2010)

by Head-end View
Thu Jul 15, 2021 3:27 pm
I doubt very much that Amtrak is coming to Long Island. Trust me it's just another pipe dream. This reminds me of all the grandiose plans that MTA had for the NYC subways fifty years ago, most of which have never happened. In fifty years, all they've managed to accomplish is to get one section of the Second Ave. subway built. And I think Amtrak and the politicians are pretty much the same.

On the other hand I'm often wrong about stuff, so anything's possible. (LOL)

by RestrictOnTheHanger
Thu Jul 15, 2021 4:44 pm
How much of the former electric layup track connecting to Hicksville track 1 is actually in service? Is it usuable the whole length? I just observed a (moving) westbound NYAR train using it a few minutes ago at the height of PM rush hour west of the station.

by gamer4616
Thu Jul 15, 2021 8:25 pm
As of now, continuing west from track 1 in Hicksville Station, will turn into the Hicksville Secondary Track (No 3rd Rail), which then turns into the North Side Track (Has 3rd Rail).

It is in use for the entire length of track. Trains 2401/2403 make Westbury their first passenger stop, but begin in the North Side Track Hicksville.

by UN Block
Fri Jul 16, 2021 4:19 pm
The Hicksville Secondary Track does have its third rail installed now. I’m sure it’s not energized yet as there hasn’t been a General Notice to that effect yet.

by UN Block
Fri Jul 16, 2021 4:23 pm
I’m guessing that the Main St pedestrian crossing is NOT permanently out of service as the gates are still functioning. When Main St closed to vehicular traffic, the crossing apparatus were deactivated that weekend.