Jindal's decision put supporters of renewed rail service on their heels. But they regrouped, and the Legislature created the Louisiana Super Region Rail Authority, an agency focused on resurrecting commuter rail across the seven parishes between Baton Rouge and New Orleans.

That group, partnered with the Regional Planning Commission, Capital Region Planning Commission and Baton Rouge Area Foundation, hired the national consulting firm HNTB in January 2013 to conduct a feasibility study of running a passenger rail service on existing freight tracks that hug the Mississippi River. They unveiled that plan in February 2014.

"(Jindal's opposition to federal transit funding) was kind of a good thing," said Kristin Gisleson Palmer, chairwoman of the authority's New Orleans delegation. "What wound up happening was (support for the funding) became more grassroots and parish-based."

The new plan scaled back its high-speed predecessor. Trains would still travel along tracks used for carrying freight. They would still stop at up to seven possible stations, and a station in Kenner would connect to Armstrong Airport by shuttle.

But the trains would not long speed along at 110 mph, settling instead for a top speed of 79 mph. And they would not travel back and forth up to eight times a day. Instead, there would be a morning train leaving in both directions, and an evening train taking passengers home.


Baton Rouge-New Orleans Inter-City Rail
The Baton Rouge Area Foundation is advocating for intercity rail between Baton Rouge and New Orleans on existing tracks. Executive Vice President John M. Spain has led the project, and he serves on the board of the Southern Rail Commission. Studies say that $262 million in upgrades would bring the tracks up to standards for inter-city rail.

Recommended train stops are downtown and the Health District in Baton Rouge, Gonzales, LaPlace, Louis Armstrong New Orleans International Airport and the Union Passenger Terminal next to the Superdome in New Orleans.


...
Capital investment for starting the service would be $262 million, with federal funds underwriting up to 80% of the amount. Startup costs are less than the $448 million estimated in a 2010 study for the state of Louisiana. The earlier plan recommended improvements for speeds of up to 110 miles per hour.

HNTB recommends intercity passenger rail operations with maximum speeds of 79 miles per hour, a rate that is competitive with car travel. HNTB also advises leasing trains instead of purchasing them to reduce upfront capital costs.

Existing rail infrastructure owned by Kansas City Southern and Canadian National would be improved to provide for safer movement of cargo and passengers along the 80-mile corridor. Crossings would be upgraded and rail lines doubled in some sections to allow freight and passenger trains to move efficiently on the same lines. Many bridges would be strengthened or replaced so trains could travel at higher speeds. Replacing the 1.8-mile wooden rail bridge across the Bonnet Carre Spillway, where trains now crawl at 10 miles per hour, is the largest capital cost at $62.1 million.
...
The recommended startup service would operate twice daily between the downtowns of Baton Rouge and New Orleans, a trip that would take one hour and 35 minutes with seven stops on the route. A morning and afternoon train for commuters would start in each of the two cities on similar schedules.


...
All is not lost. John Spain of Baton Rouge is chairman of the Southern Rail Commission. He said leaders in the region — including parishes like Ascension, St. John and St. James — want the state to find $100 million to be matched with a variety of federal sources to build it.

Once built, will riders come? At an estimated $10 to $15 each way, it’s less than Uber and allows business people to work on the train instead of wasting their ride in a car.

Cities like Gonzales and LaPlace are already working on potential terminals for commuters, or just Saints or LSU fans on game days, to get on the train.
...

...
The state would need to put up at least $100 million that could be matched dollar-for-dollar by one or more federal grant programs, said John Spain, executive vice president of the Baton Rouge Area Foundation and chairman of the Southern Rail Commission.

“We need to have the state designate experts to actually take the work that has been done off the shelf and build a financial model that will identify the funding sources both local, state and federal to make this happen,” he said.

Talk of creating a commuter rail line has been percolating and studied among state and local officials throughout the region for at least 20 years with no commitments yet for the money to build it.
...

I brought this up on the other topic since it shows how a rebuild of NOUPT would be helpful for this service. Any recent news of it lately?
"Look down, step over, and watch the gap!" - Dr. John Clarke, The Gap Rap (2010)


Wish I could work in the public sector. I'd eat my own farts and smell pigs a**'es all day and charge $1m/day for it. Need a study on which fart smells best! $100m please! Up front!
Dig the new rr.net Instagram account: @railroad_dot_net 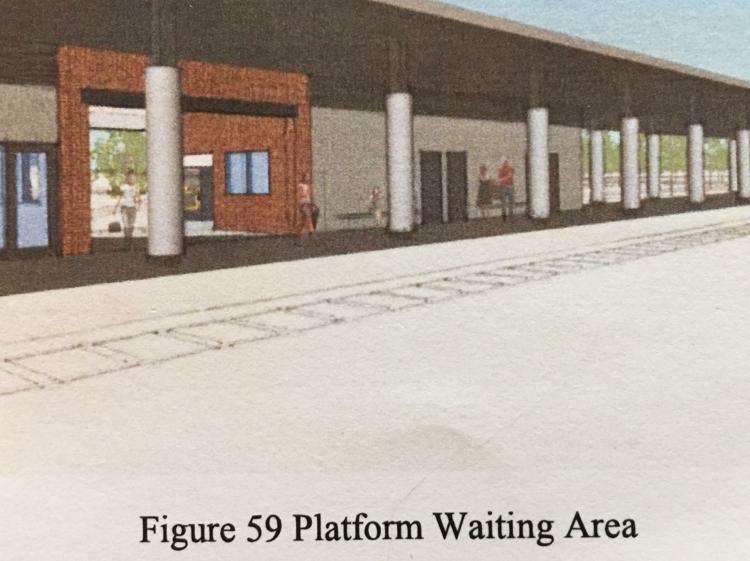 "the city of Gonzales recently paid a Houston, Texas, firm $100,000 to design a train station..."We're not going to start building a train station until the commuter line is a reality," Gonzales Mayor Barney Arceneaux said last week. "By the same token, we want to be ready." ".

They spent $100k, more than twice most Americans make in a year, to design a new train station for a route that has a 20% chance to open up?

Here's a commuter train station in Michigan City. There's one just like it in Ogden Dunes. Granted, this is in Indiana, "the state that hates passenger trains" despite being one of the first states to subsidize passenger trains after NY and PA. It probably cost $20,000 to build. It's not fancy. But 234 people/day board here, or 3.2 passenger cars worth. Somehow they survive the harsh northern Indiana winters without a $1m station.

Does this mean Indiana is not "ready" for passenger trains, despite having them for 112 years? In driving knee-deep snow and freezing temps?

You can't make this crap up. The optics are absolutely horrible. It looks to the average bystander like they are having Charlie Wilson-style party aboard with a pound of cocaine for everybody.
Dig the new rr.net Instagram account: @railroad_dot_net

Tadman wrote:Holy cow, $100m from the state matched with $100m from the feds???? WTF ARE WE BUILDING HERE???? Is there a 20 year operating subsidy built into this plan?

I'm not sure what world you live in, but it's nothing close to reality.

CN isn't really a mainline, it serves a ton of plants along the river and is slow and congested. UP is on the wrong side of the river! KCS is the only line that is feasible.

KCS's line in general needs a lot of work - it is nowhere near passenger rail standards. As you noted, it's not very active, which means KCS has not being maintaining the track. The biggest expense is the bridge over the spillway, which need to be completely replaced. CN is rebuilding theirs right now - the City of New Orleans can't even use the bridge when the spillway is open (which is now an annual occurrence) and when it's not the speed limit is 10 mph. That alone is in the neighborhood of 70 million. There are 56 other bridges, most of which are going to need replacement or significant work.

Then you have dozens of crossings which lack signals, sidings need to be added as well as signalization. Plus 6 new stations.

Now maybe you can trim a little bit off of the total cost, but it doesn't make much sense to lowball your estimate for grants. It would be extremely unlikely to get more money later on to improve things that should have been done in the first place.

by dgvrengineer
Fri Jun 05, 2020 3:39 pm
I think the money would be better spent upgrading the CN/IC line. It has a much better route and a much better location in Baton Rouge. Station could be placed near LSU campus or between Baton Rouge Blues casino and the I-10 bridge. The KCS line appears to cross every street in town at grade most with no crossing protection and is in an area that looks pretty rough. The area near the Blues casino is close to the government center and two casinos and not that far from LSU. CN does have a lot of industry along it's route, but the addition of second and third tracks would eliminate much of that problem. The CN line also has a connection across the river as does KCS if the route was ever extended to Shreveport.

by njtmnrrbuff
Fri Jun 05, 2020 9:54 pm
I believe that this proposed route running from NOL-Baton Rouge will be an Amtrak State Supported Route.

How likely do people think it is? It would be a great benefit, though it could at times be like riding a commuter line in NY/NJ/CT at 1am after a lively night in the city. Or St. Patrick's Day. Other than that I can't think of a better 85-mile corridor in a state fairly unlikely to pay the piper. (If oil/gas prices go way up, all bets are off - Louisiana is cyclical that way.)

Freight is very heavily used on both sides of the river, unless something has changed. I have never seen more interesting machines than trucked on the highway. And the most in-control Greyhound driver giving a pre-ride talk to some passengers coming off a stint on a drilling rig.

How likely do people think it is?

We could have had it by now, if the previous governor hadn't turned down federal funding. If Joe can come up with the money before the current governor leaves office, it is a sure thing. After that, who knows, but the business community is a lot more supportive of the project than before and if the Mobile service starts up, the increased connectivity should reduce the amount of subsidy required.

CN has offered to sell the KCS line, which is what this service would use, if the merger goes through. The line has little traffic and would need some work. Not having freight traffic should reduce the travel time and need for sidings though. Given how flat and straight most of the route is, we might even see 90-110 mph segments.