by BobLI
Wed Nov 07, 2012 10:42 am
I hope they run the shuttle service soon. I'm guessing they would run from Far Rock to Rockaway Park for Brooklyn bound. Its easier to transfer to a shuttle bus there being its more open space and ground level. And you dont have to go "round the horn", its a faster trip from Rock Park. Far Rockaway has a long stair climb even though theres 2 elevators there.

BTW, great photos from the 50's at Rockaway Park.

by lirr42
Wed Nov 07, 2012 7:39 pm
This would be something like what the Rockaway Park Shuttle would run like (this isn't an official map, it is one I created) 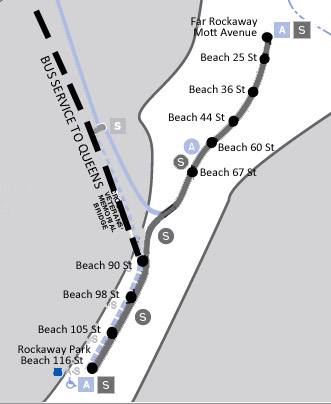 by MaineCoonCat
Thu Nov 08, 2012 6:52 pm
I've seen stuff in the past about homeless people living in the tunnels. I have not seen any reports of any casualties among that population. Has anyone heard anything about how these people are fareing?
Seen behind the motorman on the inside wall of a PCC departing "Riverside" many years ago: "Pickpockets are on duty for your convenience."

by Jeff Smith
Fri Nov 09, 2012 9:29 am
^I'm pretty sure the "mole people" or "tunnel people" was an urban legend that was debunked. I think that arose from the Riverside Park Empire Tunnel before it was restored to service, and not the subway.

42, don't they store equipment at Rockaway Park Beach? I was out there this summer and remember seeing some. Why the need to truck equipment out there? How many sets would they need? Or was that equipment damaged like everything else?
Next stop, Willoughby
~el Jefe ("Jeff Smith Rules") :: RAILROAD.NET Site Administrator/Co-Owner

by BobLI
Fri Nov 09, 2012 9:49 am
I believe they moved all subway equipment to high ground before the storm., After the storm the tracks are washed out so no way to get anything past Howard Beach.

by mikey cruz
Fri Nov 09, 2012 4:58 pm
All trains were laid up in the tunnels inland away from rock park, they should have put a train or 2 on the beach 116 ramp this way they wouldn't flood and wind wouldn't be that strong half way up the structure but they aren't used to this kinda stuff. The "mole people" aren't fictional, there's video's of NYCT cops goin down there and evicting them out of relay rooms and unused subway lines. I wanna say the areas that flooded aren't usually prone to have homeless people though (new south ferry,east river tunnels) most likely they either were moved by cops to shelters or towards midtown on their own where the lines are higher.

Jeff Smith wrote:don't they store equipment at Rockaway Park Beach? I was out there this summer and remember seeing some. Why the need to truck equipment out there? How many sets would they need? Or was that equipment damaged like everything else?

As far as how much equipment they would need, I would wager that 10-12 cars would do the job. The trip from point to point takes roughly fifteen minutes, so if they had 2 four-car sets (the norm for the off-season trains) and a couple spares, that would be plenty enough to provide service. The equipment was probably fine in Pitkin.

Jeff Smith wrote:^I'm pretty sure the "mole people" or "tunnel people" was an urban legend that was debunked. I think that arose from the Riverside Park Empire Tunnel before it was restored to service, and not the subway.

Jeff, I'm thinking that there is or was truth to this "legend".

[quote="At 3:35 PM on February 6, 2012 In an article entitled "Man who died in subway station ‘home’ had written book about living underground", Christina Boyle of the NEW YORK DAILY NEWS' staff"]

A homeless man who died when a blaze ripped through his underground home Sunday had written a book about living in the New York subways.

Anthony Horton’s body was discovered inside an abandoned communications room about 150 feet from the F train platform at Lexington Ave. and E. 63rd St., officials said.

He had been living in the subway for about two decades and wrote stories and sketched pictures about his subterranean experiences.

“He was incredibly gentle and chivalrous,” said artist Youme Nguyen Ly, who met Horton on the subway in 2004 and became friends.

The pair co-wrote the graphic novel “Pitch Black,” with Nguyen Ly writing under her maiden name Youme Landowne, which details Horton’s life and the frightening aspects of living underground.

“He was so sharing and so bright,” Nguyen Ly said.

“He was an extremely talented writer with a great voice and sense of humor and he would draw everything all the time.”[/quote]

mikey cruz wrote: The "mole people" aren't fictional, there's video's of NYCT cops goin down there and evicting them out of relay rooms and unused subway lines. I wanna say the areas that flooded aren't usually prone to have homeless people though (new south ferry,east river tunnels) most likely they either were moved by cops to shelters or towards midtown on their own where the lines are higher.

I hope you're right Mikey! My apologies for missing this portion of your post.

Please note: Although I express concern for those homeless individuals who may be or have been living in the tunnels, nothing in this post should be construed as an endorsement of dangerous or unlawful trespassing or behavior in any way, shape or form.
Seen behind the motorman on the inside wall of a PCC departing "Riverside" many years ago: "Pickpockets are on duty for your convenience."

MTA Website wrote:The MTA to Restore A to Howard Beach

The MTA is restoring

line subway service to the Howard Beach Station and adding a bus shuttle between the station and Mott Avenue in Far Rockaway.

This service restoration, in the wake of Hurricane Sandy, will provide some level of transit relief to thousands of Rockaway Peninsula residents.

"This segment of the

was especially hard hit, as was the Rockaway Peninsula and to be able to get service back to these neighborhoods is a priority for us," said MTA Chairman & CEO Joseph J. Lhota.

service to Howard Beach will begin at 8 a.m. Sunday, providing a foundation for a temporary bus shuttle service to the Rockaways. This special bus connection will remain in place until the heavily damaged subway infrastructure is replaced, a job that is expected to take up to six months.

The scope of the destruction was stunning. The North Channel Bridge, which connects Howard Beach and Broad Channel over Jamaica Bay, as well as a section of Broad Channel known as "The Flats" sustained a tremendous amount of damage. Hundreds of feet of track were destroyed on the bridge and the line segment that runs through the Jamaica Bay Wildlife Refuge. There is no working signal system, the rails are twisted and in some areas, the supporting roadbed is completely washed away. The Broad Channel station was filled with debris, including a jet ski and a speedboat.

train, which normally runs to Far Rockaway and Lefferts Blvd, is currently terminating only at Lefferts Boulevard. Once service to Howard Beach is restored, the service will once again be split with half going to Howard Beach. A non-stop bus shuttle connection will operate between Howard Beach and the Far Rockaway-Mott Ave. station. Supplemental bus service on the Rockaway Peninsula will also be provided via the regular Q22 service, running between Far Rockaway and Roxbury. Bus service in the Rockaways at night should be possible with the use of light towers and as power is incrementally restored to the area.

Other customer options include: For up to date MTA travel information, please logon to mta.info and look for special Rockaway updates. Customers are urged to use the Trip Planner tool on the website to plan their trips, which takes into account all ongoing service outages through the system.

Map from the MTA:

25Hz wrote:Can you take the E to the airtrain to get out that way?

To get to Howard Beach? I guess. It's expensive though. You pay the $5 AirTrain fare when you enter or leave Howard Beach or Jamaica Stations. So if you were to enter at Jamaica and exit at Howard Beach you would have to pay twice, or $10. The LIRR can get you to Far Rockaway for $5 off-peak or $6.75 peak, so that is the more cost-effective option (probably is better time-wise too with the bus and all)

by MACTRAXX
Mon Nov 12, 2012 6:18 pm
Everyone: Another way of getting to JFK Airport is taking either the E-F Trains to Union Turnpike-Kew Gardens
and then taking the Q10 Bus to JFK Airport...Another access point is the Lefferts Boulevard/Liberty Avenue A
Train terminal...This would cost just a regular fare and transfer-but do NOT do this with substantial luggage...
Q10 buses can become quite crowded at times...It is a busy 24 hour operated route...

The E or J Trains serve the Sutphin Boulevard/LIRR Jamaica Station stop to connect with the AirTrain there...
The cost would be the $5 AirTrain fare - $5 on a Pay-Per-Ride Metrocard would pay this fare...

It does NOT pay to go to Far Rockaway and connect with the A Replacement Bus to get to JFK...
In this case I would wait until A Train service is restored to Far Rockaway to make a trip like this...

by TacSupport1
Wed Nov 14, 2012 11:29 am
The colder it gets, the more people live in the tunnels. NYPD Officers are very familiar with the "regulars", as well as spots where they like to access, live and sleep.
Seth G. Westchester County NY
My photos: http://www.x635Photos.com" onclick="window.open(this.href);return false;

Is there some reason not to have put in temporary express service from the 116th St stop across the bridge to Flatbush Ave?

The company went bankrupt in 1887 and was bought out by Austin Corbin, the man who owned the LIRR at the time. the LIRR took full control of the company in 1904. the LIRR sold the whole ROW south of Whitepot juction to the city. Even though the northern half hasn't seen a train in 50 years, it has never been abandonded. (abandonded is a legal classification one must aply to the federal government for, much the same as when a married couple "seperates" vs actually getting a divorce/anullment)

The orginal route was almost all tressel. it was only when the line was converted to subway useage in the 1950s was most of what's now "the Flats" filled in with dirt, leaving only the aproaches to the moveable bridge sections over water. there used to be three such bridges, one just outside Broad Channel to the south was removed when Broad Channel Island was expanded.

in the top center is a camera like icon, that drops a slider that changes what map you're looking it. slide it to 1924 and zoom down on the bay.
仮面ライダー / Kamen Rider
Rider JUMP! Rider KICK!