by newpylong
Sat Feb 13, 2021 11:14 am
Culliford passed me staring at some of the posters literring the halls of Iron Horse Park once and we had this exact conversation about the what ifs.

The goal of the GTI expansion absolutely was to compete, not cooperate with Conrail from Chicago through New York into New England. The goal was irrespective of what NS was doing or not doing at the time. Any statement to the contrary is revisionist.

by QB 52.32
Sun Feb 14, 2021 1:31 pm
The initial goal of expansion with a 1984 bid for the purchase of Conrail, deemed financially-inadequate and one of more than a dozen made by various parties, certainly fits your view of Culliford's conversation.

However, my reply to PBMcGinnis' 2/9 post about "potential expansion plans circa. 1985", only made possible within NS' failed bid for Conrail, relates to that 1985-1988 time period.

Kind of surprised that in your conversation with Culliford you didn't learn GTI expansion was far more than just competing with Conrail to the Chicago gateway, but, in fact, initially for the entire railroad and then in those circa-1985 expansion plans, courtesy NS, also to the St. Louis gateway as well as to Detroit and a number of smaller midwestern cities.

by newpylong
Sun Feb 14, 2021 4:59 pm
Not many Trainmen pump Senior VPs of the railroad for additional information beyond what is offered.

I'm no way attempting to belittle anyone here, however there is so much of the GTI story that hasn't left Billerica. Much of the info is still hush hush as several players are still around *outside of the property*.

After the sale to CSXT is rubber stamped and Systems phased out, GTI information will flow with ease. Several books are ready to hit the publisher but are on HOLD until.

A censored version I can share is GTI wanted two things. The 1st to be a true coast to coast railroad. This was seen throughout the 80s with bids on Conrail, SSW/SP, ICG. They even put in a bid for Santa Fe. The second motive was to be a competitor later successor to Conrail once it was determined to be privatized.

GTI managment had a huge influence with the formation of Norfolk Southern that goes back to the 1970s with stocks on the N&W and Southern. That's all I can say on that for the moment.

by CPF363
Tue Oct 12, 2021 6:01 pm
Looking at the map, if Guilford were to effectively compete with a combined Norfolk Southern-Conrail system, one would think that they would have wanted the entire Nickel Plate and the Big Four line verses a group of owned and trackage rights lines. Dipping down south and west of Cleveland to Crestline only to get on to the old PRR does not make that an effective route to Chicago. Not to mention the fact that the PRR was physically not in the greatest shape either. NS-Conrail would have still kept the parallel former Wabash line to both St. Louis and Kansas City. This western network would be along the lines of what the EL wanted in the mid 1970s before they joined Conrail.

by GTIKING
Tue Oct 12, 2021 9:20 pm
NS was scheduled to be rolled into GTI by 1992. Mellons family began grabbing controlling stocks in N&W and Southern during the 70s into the 80s. What delayed Guilfords birth was Dereco, they needed that dissolved in order to get the D&H. Now enter Timothy, planted in New England to jump start this futuristic Trans con class 1. They knew he could get the D&H making sure Dereco died. So to jump start they bullied their way into absorbing the MEC as a way in. That's another tale within itself. So GTI started working it's way west, snapping up broken roads to get a jump start. Had their visions panned out we would have seen the MEC and B&M property dumped as it's now longer needed. Now there was a unofficial plan within the Mellon family that should GTI/GRS/Systems go belly up that Timothy would jand it over to NS. This fued is still influencing NS' behaviour to this day.
That's as close as I'll get to the fire. For now..

by Cowford
Thu Oct 14, 2021 9:45 pm
Based on how the history is being laid out, I'll be sure to look for those books in the Fantasy section at my local Barnes & Noble.

by GTIKING
Fri Oct 15, 2021 10:30 am
It's no coincidence GTI/GRS received a healthy chunk of it's roster from NS. Nor the numerous planned strategies amd operating scenarios of CR between NS/GTI and transfer of equipment.
1984 a fleet of N&W gp9s amongst others were planned for the RR as well, that did not pan out.
Who spearheaded the deregulation of the railroads? Mellon.
Specifically to set the stage for his Trans con RR. Who put in bids for SP, ATSF, ICG,CR? Mellon.

Yes, once GTI got what it needed talk was heavy about potentially off loadingthe MEC/B&M. It's use being over as it had served it's purpose of being a starting point for Mellon. Who in their right mind would would buy a railroad with dropping paper loads and two others that were beyond belly up LOL

There is a beautiful map map of the country hanging in the office. It shows GTI lines running to Chicago, St Louis. SP was on the map but marked 'pending' going west, dated 1987. You probably won't believe GTI was running their engines to St Louis over the NS with a sleeper car on the head end, for crews to rest. I've seen a nice a slide of GTI U30cs in St Louis.
Last edited by GTIKING on Fri Oct 15, 2021 12:58 pm, edited 2 times in total. 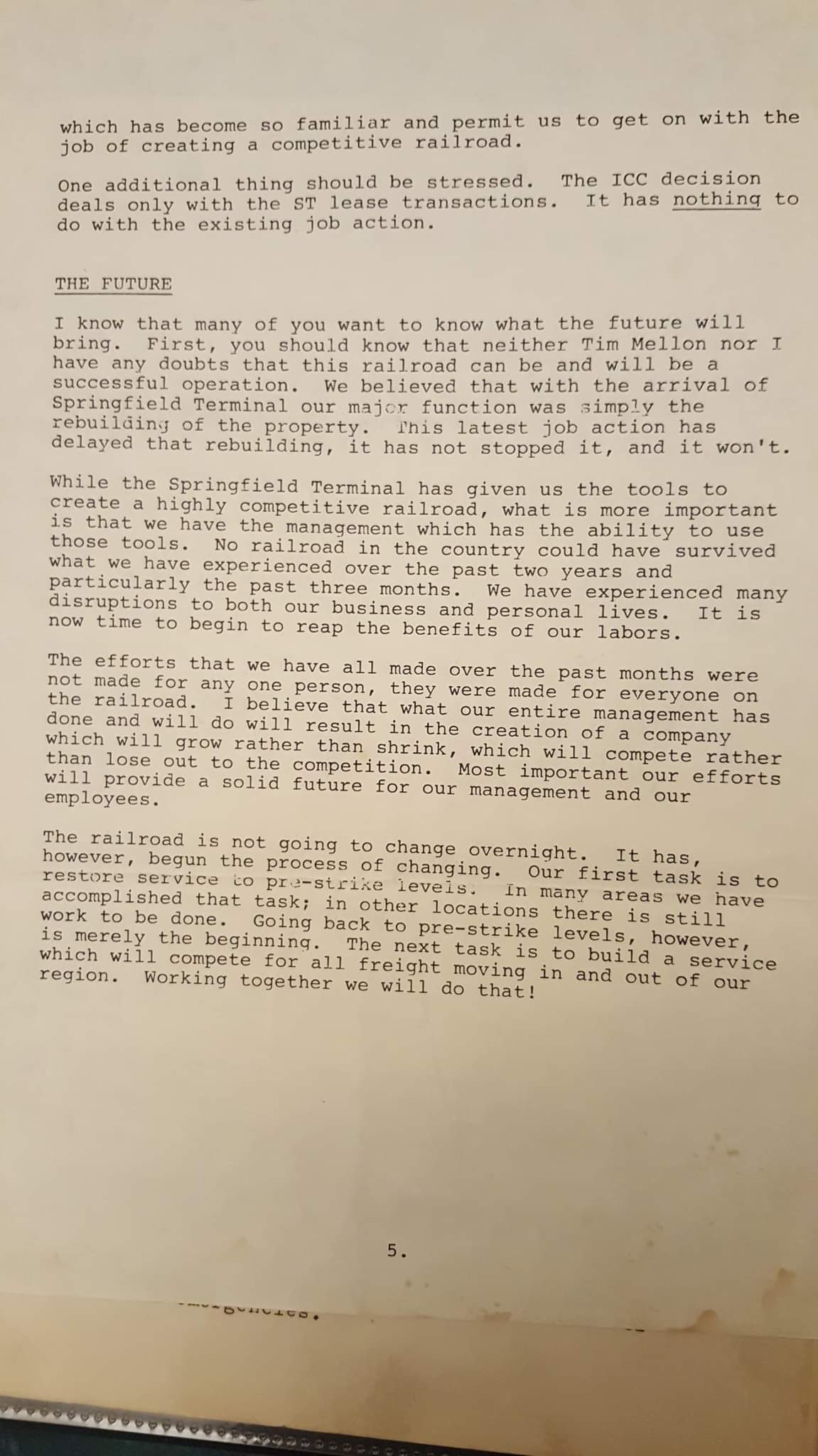 Hot headed tempers got the best of the GTI and ST work rules were enacted too soon. Had they waited it would have been a go.

by newpylong
Fri Oct 15, 2021 2:08 pm
All I know is I and probably 99% others will breath a sigh of relief when we can speak about this outfit in the true past tense.

by 161pw165
Fri Oct 15, 2021 3:53 pm
To think the STB would've let relatively tiny GTI purchase its way into becoming a transcon, especially with how they handled the ST fiasco, is almost laughable. Please excuse my disbelief.