There will be shuttle service to North Station. All bus service to Lechmere continues (69, 80, 87, 88). The new and relocated Lechmere station will open in April 2021, as well as the GLX spur to Union Square (E branch).

Why does there seem to be nothing about this on the MBTA Web site?

From a "Green Line Extension" standpoint, ever since the land-swap deal with Guilford/DelawareNorth that traded away Old Lechmere for the New Lechmere site (as part of a much bigger deal), "we all" knew that there'd be an interval where service to Old Lechmere would be bustituted, partly because the developers wanted to get their hands on the Old parcel, and partly because there was going to be a gap as the steel El structure was torn down and replaced.

From the FMCB meeting, Sec. Pollack said that the Lechmere Viaduct rehab was accelerated 4 years to coincide with the GLX-induced closure. (Had it not been, she said, they'd have faced the embarassment of opening the GLX and then 3 years later closing the viaduct.

As for why it doesn't appear in "upcoming closures" my guess is that they know that it is +/- 30 days from April 30, and specific enough to think that Union Sq will be ready "11mo to 12mo later" but not quite ready to announce a date certain for bustitution.

But we do see it deep inside.

Bid comparison for the contract
FMCB Presentation (which said it was being coordinated with the GLX's March 2020 to April 2021 closure of Lechmere)
"Trying to solve congestion by making roadways wider is like trying to solve obesity by buying bigger pants."--Charles Marohn


The Massachusetts Bay Transportation Authority (MBTA) on May 18 will begin work to install two cross-track drainage lines beneath the Tufts interlocking in Medford in order to advance the Green Line Extension (GLX) project.

The work is necessary to accelerate construction of critical infrastructure inside a narrow rail corridor shared by the Lowell commuter-rail line and the GLX project, MBTA officials said in a press release.
...

by troffey
Sat May 23, 2020 7:31 am
For anyone interested, today is the last day of operations over the viaduct to Lechmere station before the shuttle busses and construction work begin.

by soundguise
Wed May 27, 2020 12:20 pm
Now that stations and track and especially the super visable work near lechmere is ongoing, any chance we could try to post some "under construction" photos.

I promise to snap some next time I bike by the museum of science. 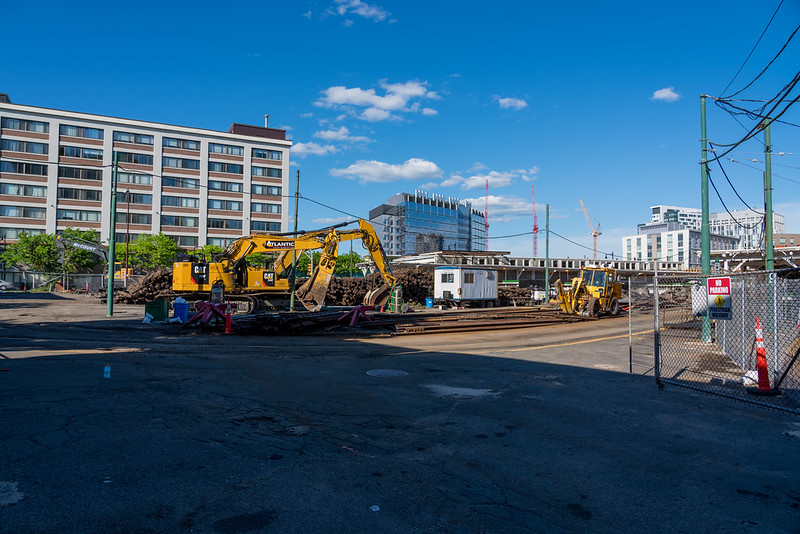 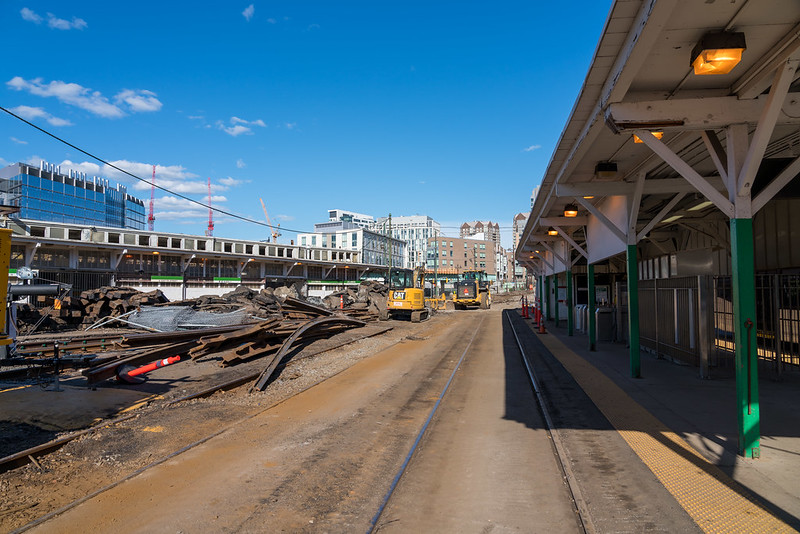 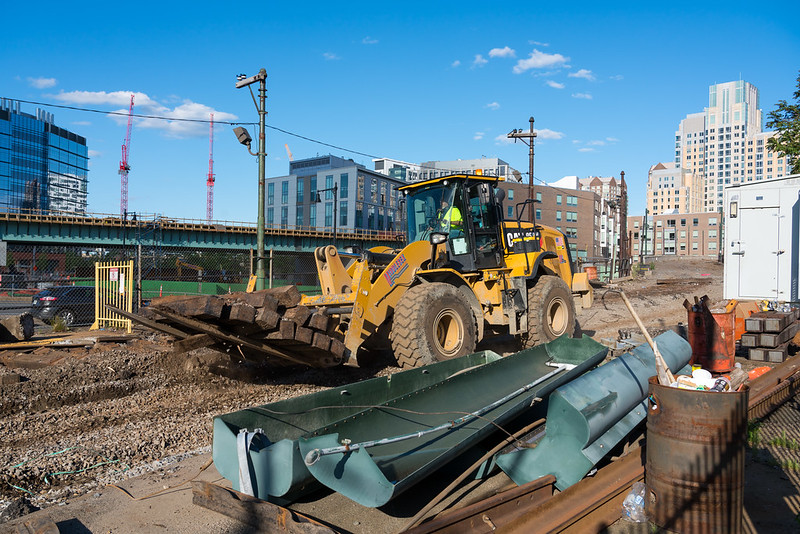 I noticed that the overhead has been removed all the way to Science Park. Also, the T is not using its own buses for the shuttle service - they're using buses from Academy Express.
"The destination of this train is [BEEP BEEP]" -announcement on an Ashmont train.

The Union must be up in arms!!!

The two lines split behind Superior Nut Company about 300m WNW of First Street.
You do not have the required permissions to view the files attached to this post.

by apodino
Tue Jun 09, 2020 5:40 pm
Wow...bittersweet to see the old Lechmere go, but I am glad to see that better things will come of it. The only thing I think the T bungled is when the Lechmere viaduct was closed the last time, that would have been a better time to build the new Lechmere station, and it could have avoided this shutdown. But the area will look so much different now, and I think it will actually brighten up the area near Cambridgeside Galleria.

So when all is said and done, my understanding is that the Tufts Branch will basically be an extension of the D branch, and the E branch will be the one going to Union Square. I would assume if that is true, the C trains will continue to turn at North Station, and the B trains will be extended back to Government center, with Park Street being a turn as directed station. Is that a safe assumption?
Rich "Dino" Martin
A one time happy rider of Arborway and the old Washington St. El.

by The EGE
Tue Jun 09, 2020 6:57 pm
That is the plan as far as has been announced, though there hasn't been word on whether the B will loop at GC or Park. However, the projected Medford Branch boardings are nearly equal to the current D Branch, and current bus ridership to Lechmere is more concentrated on the peaks than the D Branch is. So it's very possible that you'll see sufficient crowding on that line to require extending the C through as well.

by ceo
Tue Jun 09, 2020 9:18 pm
I'm pretty sure your labels are reversed. The single-track viaduct to the right is the northbound Union Square ramp, and the double-track one to the left is the Medford branch.

What I do not understand is why the Lechmere viaduct has to be closed for a year. Back in 1987, it took 4 days to change the Orange Line just south of Chinatown. Why not build finish the tracks and stations to Union Square and build the connection, about 60m, over a month.
You do not have the required permissions to view the files attached to this post.
Last edited by CRail on Tue Jun 16, 2020 10:34 am, edited 1 time in total. Reason: Unnecessary quote removed.

by apodino
Thu Jun 11, 2020 1:01 pm
Remember that the Lechmere viaduct is being demolished and rebuilt as far south as the Gilmore Bridge. So the connection is not a simple as 60 Meters as you say, its more like a half mile of work. A significant portion of the viaduct is being rebuilt and the footprint for the new viaduct is going to cover the same part as the exisiting viaduct. So at some point, the viaduct would have to be shut down for a year to replace it (The old viaduct N of the Gilmore Bridge had to be renovated or replaced anyways as it was near its shelf life) By doing this at the same time as the rest of the project, this actually saves time and is much more beneficial to the project.

The reason the SW Corridor project could be tied in only four days is because the entire footprint was underground, and thus no additional construction was needed so it was simple enough to tie in the new line. Very similar to the Red Line extension to Alewife back in the day.
Last edited by CRail on Tue Jun 16, 2020 10:34 am, edited 1 time in total. Reason: Unnecessary nesting quotes removed. Do not use the "quote" button as a reply button.
Rich "Dino" Martin
A one time happy rider of Arborway and the old Washington St. El.

by ceo
Thu Jun 11, 2020 3:46 pm
Also, they have to reinforce and rehabilitate the viaduct from Science Park to the Gilmore Bridge as well, as right now it's in such bad shape that it's severely restricted in how many trains can be run over it and how fast. This project got pushed up a few years so they could do it at the same time as the GLX shutdown.