by 0SCAR1
Fri Jan 14, 2022 3:35 pm
Seems like Hopedale is listening to the residents and taking a legal course of action that will not end well. They didn't have a slam dunk case in land court, and now they have to reverse their own request for dismissal with prejudice. I'm not a lawyer, but when the plaintiff motions to dismiss their own complaint with prejudice, they're giving up their right to relitigate it in the future. Perhaps this is the only politically acceptable path forward for the Select Board. But if Hopedale loses in land court, the railroad gets it all.

"The Select Board has reversed field and now wants to reopen the Land Court case it filed to acquire 130 acres of forestland the Grafton & Upton Railroad was on track to take.

"On Dec. 30, the town filed a motion to reopen the case against the railroad to proceed with its original decision to buy the 364 West St. property under state law Chapter 61, for which Special Town Meeting gave its approval in October 2020.

In January 2021, after at least a year and a half of lawsuits, legal mediation, local and state hearings, and resident petitions and advocacy, the town and the railroad reached accord on splitting up the West Street property. Under that settlement, Hopedale was to acquire about 85 acres in the area, as well as a commitment from the railroad that it wouldn't develop another, small section for five years. The town would pay $587,500 for 64 of those acres.

"To seal that agreement, the town in February 2021 filed court papers to dismiss "with prejudice" its Land Court case against the railroad permanently.

"Now the town has changed its mind on the deal, citing "compelling and extraordinary circumstances," according to its Dec. 30 motion."

0SCAR1 wrote: ↑Tue Dec 28, 2021 11:32 pm A Superior Court judge has said the town’s deal with the Grafton and Upton Railroad over land on West Street is invalid until it receives Town Meeting approval.

If the town doesn't act, the railroad could take over 155 acres of disputed land that's been under debate in court for over a year.

The town has until Jan. 31 to make its decision.

The tow chose to go back to land court. No special town meeting scheduled. Does the January 31st deadline still apply?

if I'm tracking this correctly, they want to exercise their right of first refusal and buy the entire parcel. The reason they were in land court was because they were denied that right when the railroad bought the trust that owned the land in question.

by MaineCoonCat
Sun Jan 16, 2022 11:01 am
Disclaimer - I'm not a lawyer either..
I think when they asked the Land Court to "Dismiss with prejudice", that slammed that door shut and locked it.
Seen behind the motorman on the inside wall of a PCC departing "Riverside" many years ago: "Pickpockets are on duty for your convenience."

by b&m 1566
Sun Jan 16, 2022 12:48 pm
It has to be next to impossible, for the town to try and hold a special election by the January 31st deadline. The town should focus on the agreement they came to with the railroad, and work to get that placed on the ballot for the annual elections in March. The people in town need to understand that if voted down, all the land goes to the railroad. Now, should the vote not pass the railroad, could be a good neighbor and reserve the land for 2023 elections, but that's just being neighborly at that point.
Last edited by b&m 1566 on Mon Jan 17, 2022 11:01 am, edited 1 time in total.
It takes real skill to choke on air, fall up the stairs and trip over nothing. I have those skills.


Section 10: Warrant; issuance; contents
Section 10. Every town meeting or town election, except as hereinafter provided, shall be called in pursuance of a warrant, under the hands of the selectmen, notice of which shall be given at least seven days before the annual meeting or an annual or special election and at least fourteen days before any special town meeting. The warrant shall be directed to the constables or to some other persons, who shall forthwith give notice of such meeting in the manner prescribed by the by-laws, or, if there are no by-laws, by a vote of the town, or in a manner approved by the attorney general. The warrant for all town meetings shall state the time and place of holding the meeting and the subjects to be acted upon thereat.

https://malegislature.gov/Laws/GeneralL ... /Section10
Seen behind the motorman on the inside wall of a PCC departing "Riverside" many years ago: "Pickpockets are on duty for your convenience."

On the land court case, the railroad's argument is that the settlement is binding. The Town negotiated for right to purchase the 64 acres for $587K, and then get 20 acres donated from RR. That converted a legally risky chapter 61 claim into a concrete right to purchase the land at a lower price. That is still in effect, and the Town just needs to appropriate funds. Even after Jan 31, the agreement is binding, so the Town can decide when and if to exercise that right, and to hold a town meeting to approve funding at it's leisure.

Also good rebuttal to Town's bid to vacate the dismissal. It challenges the Town's position that there are new circumstances to warrant re-opening the case because the 10 Citizen's legal challenge was known to the Select Board prior to executing the agreement and dismissing all claims.

PDF and link below image. The image is NOT a link to the document. 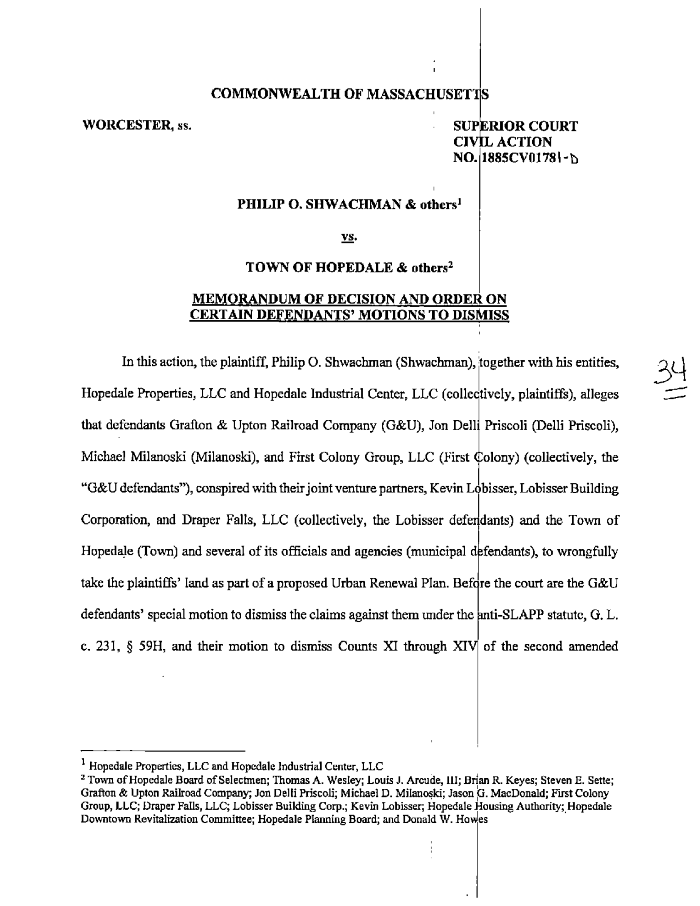 NOTE: Due to the website's setup it is not possible to link directly to a document. This link will bring you to the
entrance page for searching court records. You should select "Superior Court" and "Worcester County" to
search records related to this case.
https://www.masscourts.org/eservices/home.page.11
g&amp;u vs shwackman dismiss denied.pdf
You do not have the required permissions to view the files attached to this post.
Seen behind the motorman on the inside wall of a PCC departing "Riverside" many years ago: "Pickpockets are on duty for your convenience."

PDF and link below images. The images are NOT a link to the document. 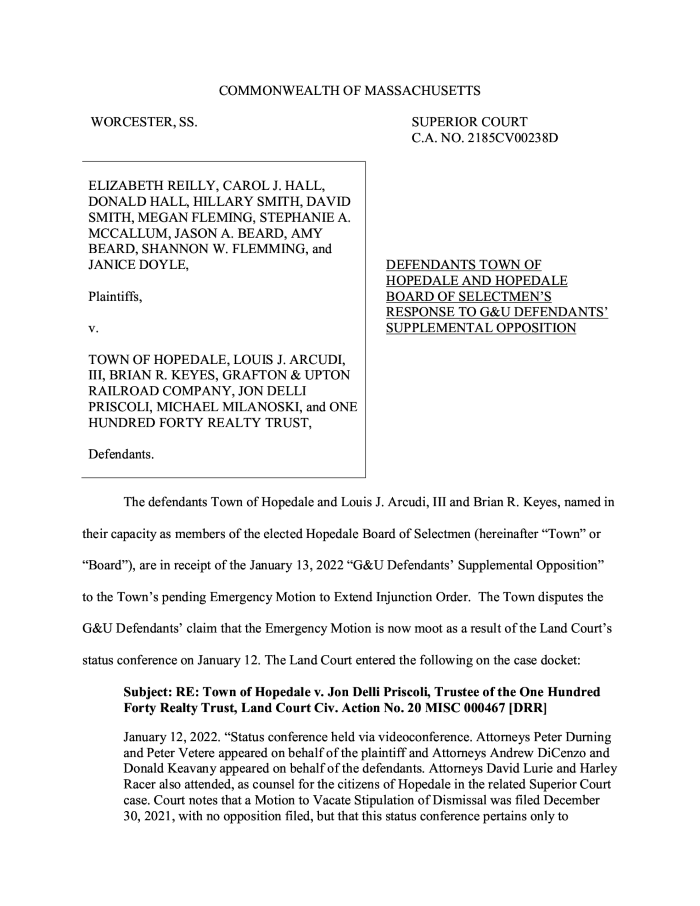 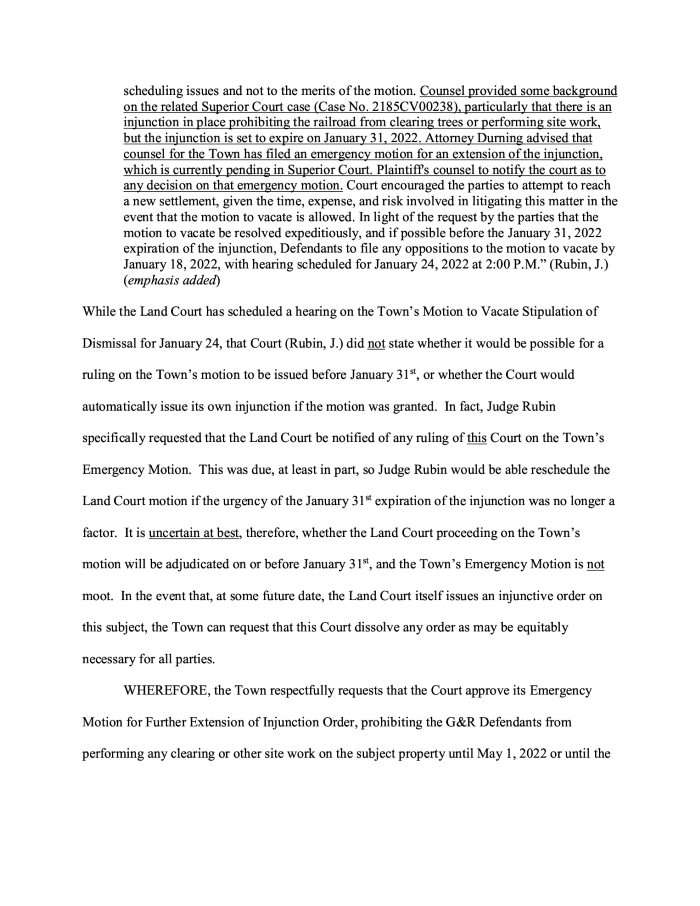 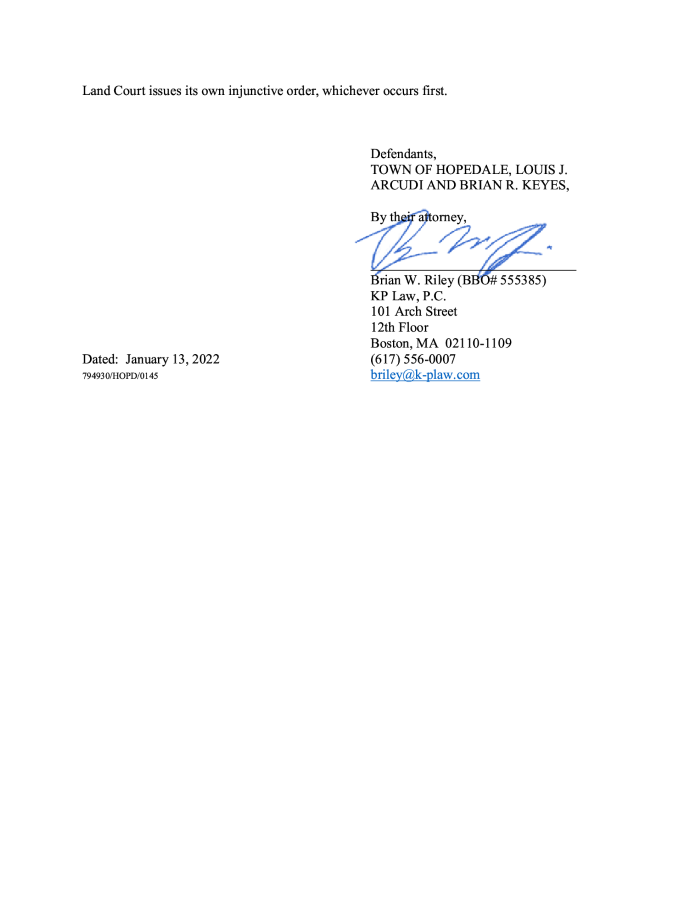 NOTE: Due to the website's setup it is not possible to link directly to a document. This link will bring you to the
entrance page for searching court records. You should select "Superior Court" and "Worcester County" to
search records related to this case.
https://www.masscourts.org/eservices/home.page.11

HOPD_Reilly_-_selectboard response_to_Deft_s_supplemental_opposition_.pdf
You do not have the required permissions to view the files attached to this post.
Seen behind the motorman on the inside wall of a PCC departing "Riverside" many years ago: "Pickpockets are on duty for your convenience."

by 0SCAR1
Fri Jan 28, 2022 6:05 pm
Lots of legal action this week. Land court heard the motion to vacate the dismissal of the land court case on Tuesday. Then the 10 citizens filed motions to intervene and join the case. Judge deferred them until motion of dismissal was dealt with. Then today the judge ruled against Hopedale's motion, leaving the case as closed.

The net result is that the Settlement Agreement is intact and Hopedale has the ability to hold Town Meeting to authorize purchasing the 67 acres for $587K, and also to authorize receiving 20 acre donation.

In a related action in Superior Court, the judge there refused to extend the injunction against the railroad for land clearing. The judge noted that G&U agreed not to clear land until Feb 14th to allow legal motions to be addressed. So Superior court noted this and asked for a status report in February on the land case. At this point, I suspect the judge will say the matter is moot. Oh, and Hopedale is having a meeting on the 31st (Monday) to discuss the case with Town residents.

In terms of what is next, the Town would have to find a new issue to litigate to alter the Settlement Agreement. Don't know what that would be. And the ten citizens can find new things to sue about too. Their lawyers have been creative but unconvincing thus far.
You do not have the required permissions to view the files attached to this post.

by 0SCAR1
Fri Apr 01, 2022 8:32 am
Case just went to MA Appeals Court. The town is appealing the denial of motion to vacate the dismissal. Unfortunately MA Appellate court doesn't make the documents available online so we can't read the details. Citizens made a motion to enjoin Railroad from futher work at site (destruction of forest land) and Judge granted pending responses from all parties by April 7th. Railroad motioned to require Citizens to post a security deposit for legal fees.

Town meeting was last weekend and the Warrant to purchase land under the terms of the Settlement was denied. The mood of the town is that the chapter 61 rights should be reclaimed and the entire property purchased. Town's only option is to appeal the dismissal and then basically start over with the original issues. (The Town gave up those rights as part of negotiated settlement.) The hard bit is that the Town dismissed the case with prejudice, which has a high bar to reverse.

The Select Board's position seems to be that this is a pointless quest with low chances of success and expensive legal fees. The citizens are demanding they proceed. The railroad is indicating they'll seek to recover damages from being denied use of their land during all these appeals. It's an interesting legal question if they can sue the Town or Citizens to recoup that.

An interesting note from the town meeting was about Parcel A. In the settlement, there were no deed restrictions placed on that Parcel like they did with the others. The belief was that the Town would buy it immediately. Since the town won't buy it (no approval from Town Meeting) the land is 100% owned by the Railroad with no restrictions on use. Citizens insist the land is still rightfully the Towns under Chapter 61, which the Select Board declined to assert. The Settlement Agreement itself has not been challenged in Court, and can't be challenged by the Citizens (as a non-party), so I don't see how the Chapter 61 rights can be reclaimed. But I'm not a lawyer.

by 0SCAR1
Wed Apr 27, 2022 8:50 am
Per Hopedale Select Board meeting on 4/25, Hopedale is withdrawing their appeal of the denied motion for relief from judgement, citing high legal costs and minimal success.