For the Anthracite Fans: Abandonment of the CNJTresckow Branch

For the Anthracite Fans: Abandonment of the CNJTresckow Branch

by pumpers
Thu Dec 02, 2021 7:27 pm
I saw a note in the recent Railpace magazine and then just now found it at the STB site. The former CNJ Tresckow branch is being formally abandoned. I didn't read all the details yet, but it seems the tracks were pulled up 40 or 50 or so years ago. If you go to the STB site https://www.stb.gov/proceedings-actions/filings/ and then search for Filing number 303208 from Nov 12, 2021, you find the whole pdf to look at, along with maps.

It was a bit of an odd duck - a short anthracite branch (about 7 miles long) which was disconnected from the rest of the CNJ system, and reached from a connection to the Reading branch to Silver Brook Mine branch which itself was only a mile or so long, coming off the old Reading Catawissa line short of the tunnel at Lofty, PA. The Tresckow branch went sort of north a mile or so to just south of McAdoo, veered northeast a mile or so, and then south of the town of Tresckow it did a U turn and went back west just north of McAdoo, crossing the LV line to Hazelton (which is still operated by R&N) and then ended a mile(?) farther west where the mines were. It dated to ~1870 was part of the L&S before the CNJ leased the whole L&S to get into the anthracite region a year later (see below). The Catawissa line itself is also operated by the R&N, up to a point about a mile south (timetable east?) of Lofty. I am not certain but I believe CNJ reached this branch from their PA main line (also ex L&S) by using their Nesquehoning branch just north of Jim Thorpe to get to the Catawissa and then with rights on the Catawisssa. Or maybe the Reading delivered the loads to them .

From the STB Filing: The Line, which extends approximately 7.7 miles from Silverbrook Jct., PA, to Audenried, PA, was built in 1870 by the Tresckow Railroad, which was controlled Lehigh Coal & Navigation Company (“Lehigh”). See Central R. Co. of N.J., 149 ICC 659, 826 (1929). In 1871, Lehigh leased the Line, which was part of a collection of railroad properties known as the Lehigh & Susquehanna Railroad System (“L & S System”), to the Central Railroad Company of New Jersey (“CNJ”) for 999 years. In 1963, the Interstate Commerce Commission (“ICC”) authorized the Reading Company (“Reading”) to purchase the L & S System from Lehigh, subject to CNJ’s rights. See Reading Co.—Purchase—Lehigh & S.R. System, 317 I.C.C. 633 (1963). In 1971, the ICC authorized CNJ to abandon the Line. See R.D. Timpany, Trustee of the Property of the Central Railroad Co. of New Jersey Abandonment of Its Tresckow Branch, In Carbon County, PA, FD 26659 (Sub-No. 7) (ICC served Aug. 24, 1971). The Line was apparently taken over by the Lehigh Valley Railroad Company in 1972. See United States Railway Association, Final System Plan, Vol. II, p. 504 (1975). The Line, which was identified in the records of the United States Railway Association (“USRA”) as Line Code 0523 and USRA Line No. 1030, was not designated for transfer to Conrail in the USRA’s Final System Plan. In 1976, Conrail acquired the property associated with the Line from the Trustees of the Property of the Reading Company, pursuant to the Order of the Special United States District Court established pursuant to Section 209(b) of the Regional Rail Reorganization Act of 1973, Pub. L. No. 93-236, by conveyance document RDG-CRC-RP-17.

by pumpers
Tue Dec 07, 2021 9:45 am
By the way, the CNJ Nesquehoning Branch (~19 miles) mentioned above has recently been bought outright by R&N.
https://www.rbmnrr.com/happenings/2021/ ... cquisition
It was always part of the R&N mainline from Reading up to Scranton, but it was actually owned by Carbon County and R&N has had rights on it since 1997, just after R&N started up.

And I also read somewhere that confirmed that the CNJ indeed had rights on the Reading Catawissa line north (timetable west?) of Tamenend up to Lofty, and on the Silverbrook Branch (and after 1891 near Lofty also on a short part of a Reading branch called the Tamaqua Hazleton & Northern built ~1891), all to reach its Tresckow branch.

by lvrr325
Wed Dec 08, 2021 5:01 am
It appears the horseshoe curve it made below Tresckow is still visible in satellite images as a line through the trees.

by pumpers
Wed Dec 08, 2021 12:41 pm
I've always been interested in the details of this area west of the Lehigh River for some reason. Last night I copied the map from the STB abandonment filing I mentioned, and put labels on it as best as I know, much of which came from this PA Railfan forum 15-20 years ago. The Reading branch Tamaqua Hazelton & Northern was short lived, I think by ~1940 or so the northern part was already cut back to the short piece necessary to reach the CNJ Tresckow branch. After the TH&N was built (1891) the CNJ would have used the Catawissa line from Tamanend to Hazleton Jct, then the TH&N, and finally a short piece of the Silver Brook Branch. From 1870 to 1891, they may have had to reverse at Lofty, using the "old" Silver Brook Br.

Note there is one modern piece - an ex-LV to ex-Reading connector built I think in the late 1980's by Conrail. Also, just off the top of this map, starting north of about Tresckow and running to east to the Lehigh River and then south to Parryville, was the Beaver Meadows RR (~1836, later part of the LVRR, the first steam RR into this area). 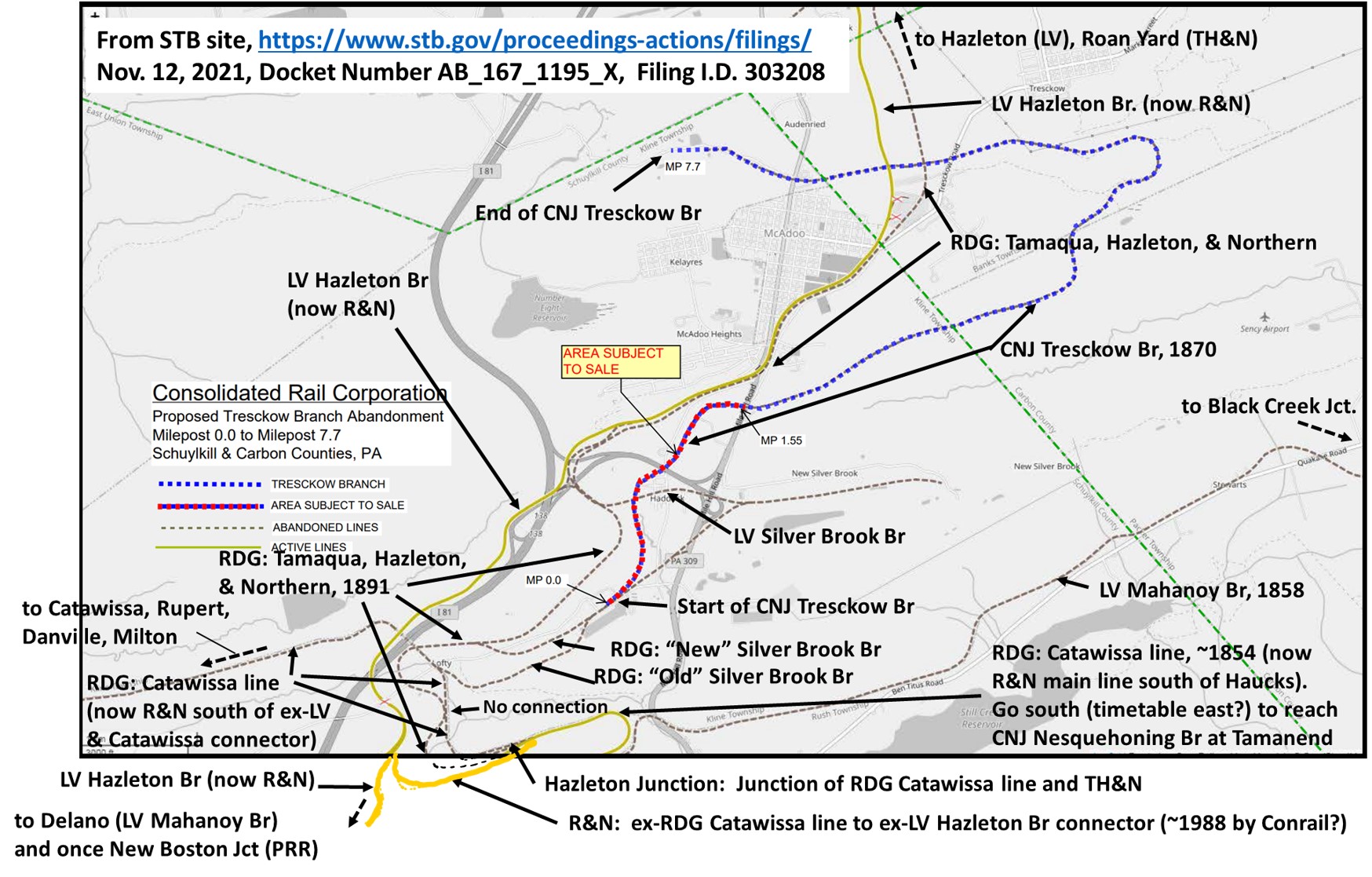