I´m new here. I´ve been reading through posting rules and also searched the forum for a answer to my question before posting...
Thing is, I bought this model locomotive some time ago, since I liked the look of it. I´m no expert in EMD locomotives, but understand that this is a 3 unit demonstrator in GM color scheme from the 50s. It has road number 701 and 702...

I would like to have more detailes about this demonstrator, if it really exsisted in this color scheme and if so, on which lines it serviced as a demonstrator? 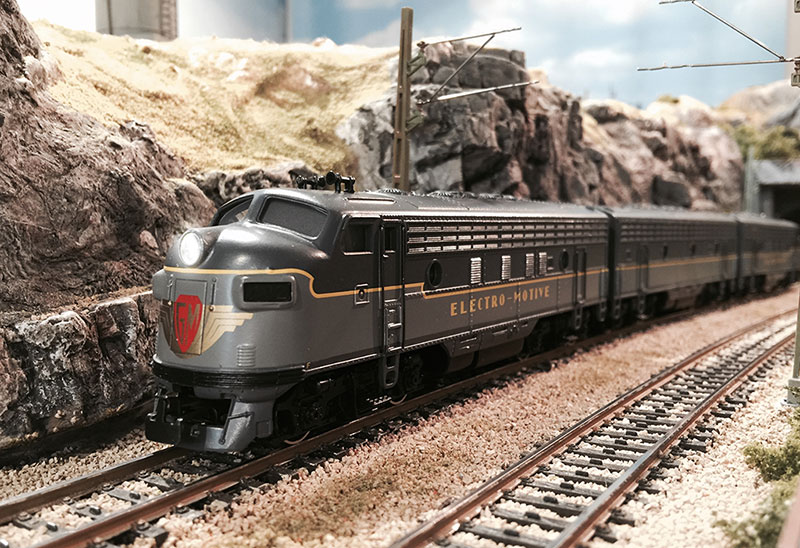 Re: EMD F7 Demonstrator - But is the color scheme authentic?

by Allen Hazen
Fri Apr 08, 2016 11:33 pm
This
http://thedieselshop.us/INDEXDEMOS.html" onclick="window.open(this.href);return false;
useful website has a list of EMD demonstrators (I don't know how complete or accurate), and when I just (evening of 8.iv.2016) looked was illustrated with a colour photo of an A-B-A F7 demonstrator set numbered 1950, in a cream and orange colour scheme. The list has something like a dozen F7 and FP-7 demonstrators, built over a significant period of time: they probably DIDN'T all have the same colour scheme, and none have the numbers 701-702. (I think there were cases where EMD sent a demonstrator to a particular railroad and hoped to sell it to them at the end of the demonstration, and so painted the demonstrator in that railroad's colours: an F7 demonstrator set that unsuccessfully demonstrated on the Nickel Plate (NYC&StL), which never actually bought an F-unit, was painted in a scheme adapted from that railroad's Alco PA locomotives.)
So my GUESS is that this is an imaginary paint scheme. But not an implausible one: it has the LOOK of real schemes from that period. I had a friend who made up a detailed "alternative history" to justify the imaginary features on his model railway layout, trying carefully to keep it plausible. The story justifying this (if I'm right and it is imaginary!) could be very simple and I think believable! ("These were demonstrators built to try to convince the XY&Z to buy EMD locomotives, and they had already used a similar colour scheme on their Alcos…")
---
Another resource: George Elwood's "Fallen Flags" rail image site
http://www.rr-fallenflags.org" onclick="window.open(this.href);return false;
has an EMD section: I haven't checked, but it probably contains photos of a number of EMD demonstrators.