CharlieL wrote: ↑Tue Jan 24, 2023 3:20 pm The Farmingdale tax map does not show the old track leading to where the diamond was as part of the ROW. Only the curved portion leading to the switch. And the property leading to the Southern which would be needed for the wye was never part of a ROW. That said, a wye would be to Farmingdale's advantage. It would cut rail traffic across Central Ave, Academy, and Main St. by half.

It may not have been part of a ROW, but according to that onX Hunt app which is pretty reputable, the same entity that owns the FIT and SOUS, owns that weird track of land where a wye would go.

And yes, the amount of trains that would go through the busier roads in Farmingdale would be indeed reduced, unless traffic picks up on the northern part of the SOUS due to freight restrictions being lifted with the new route.

by CharlieL
Tue Jan 24, 2023 3:59 pm
Norfolk Southern, as inherited from PRR. That relieves my mind. Thanks, John. And that shows the wye leg would be no tighter than the existing leg. Still gonna be a lot of paperwork (hassle) though, NJT may get involved and lend a helping hand.

Also makes it look like the Pennsy might have considered a wye at one time, perhaps to get trackage rights to the diamond at Whitings.

CharlieL wrote: ↑Tue Jan 24, 2023 3:59 pm Also makes it look like the Pennsy might have considered a wye at one time, perhaps to get trackage rights to the diamond at Whitings.

Yes, it certainly looks like when the property lines were originally drawn up, 150 or so years ago, that the PRR (or forerunner) wanted to leave space for a future connection to enable a (compass) eastbound PRR train from Freehold to connect to head (compass) southbound on the Southern (which I think we agree never came to fruition).
Someone probably stuck their neck out on that one - only to be validated (we hope) 150 years later.
JS
EDIT: at the time of its building in 1868, the Jamesburg-Freehold portion was built by the Squankum and Freehold Marl Company (and then right away incorporated into the Freehold and Jamesburg Agricultural Railroad). So our foresighted planner probably worked for the S&FMC. I think the PRR took over around 1880.

by JohnFromJersey
Tue Jan 24, 2023 5:48 pm
Interesting to know that the Farmingdale-Sea Girt portion of the line didn't last a full one hundred years.

JohnFromJersey wrote: ↑Tue Jan 24, 2023 5:48 pm Interesting to know that the Farmingdale-Sea Girt portion of the line didn't last a full one hundred years.

About 90 years. The Farmingdale and Squan Village Railroad Company built that section, completing it in the 1874 plus or minus a few years (can't find exactly when the rails were opened) and merged into the Freehold and Jamesburg Agricultural Railroad in 1879. Last passenger train on that segment was 1962*, and last freight either 1964 or 1966 depending what I read, before becoming the bike trail.
[* IIRC (which is always a big "IF" these days), one source on the web, which I can't find now, incorrectly says the last train was in the 1930's. ]

by JohnFromJersey
Tue Jan 24, 2023 11:41 pm
@pumpers, I saw that too. There are two different Wikipedia pages for that same line, Farmingdale and Squan Village Railroad and Freehold and Jamesburg Agricultural Railroad. One says 1932/3 as the last train date, when that is absolutely not true - there are some members of this forum that remember seeing (and even riding on) the Farmingdale-Sea Girt route in action well into the 1960's. Guess we can't trust armchair internet historians writing articles about niche local railroad history.

IIRC, the line was abandoned in 1966, I don't know if that was when the last train was. Somewhere between 1966 and 1971 (when the initial bike path opened), they ripped up the tracks. IIRC the Pennsy was eager to remove the rails to prevent a competing entity from taking it over.

I must say, it's a shame it became a bike path. It's a nice bike path, but it would be better served as an NJT route out to Trenton from the Jersey Shore. Maybe it could have been a trail with rails, but that ship has sailed.

A little better to read

by Forest3670
Wed Jan 25, 2023 6:19 am
PDF of APP articule
You do not have the required permissions to view the files attached to this post. 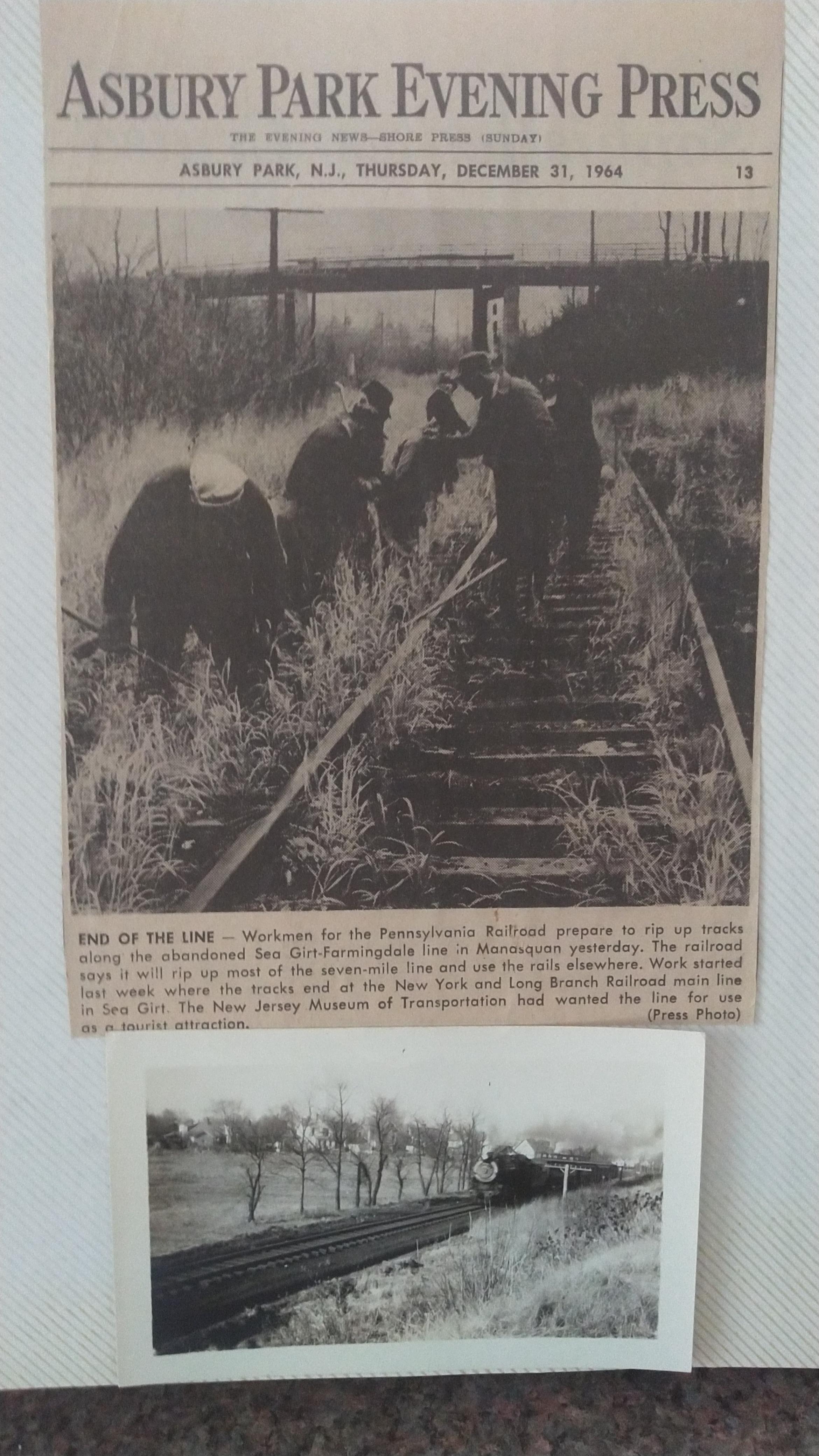 I found a article in my collection by the APP when the section between Farmingdale and Sea Girt was pulled.
Jim H

I guess that is rt 71 in the background? They ripped the bridge and embankments out and laid it flat and then all the businesses bought the roadside property up.

by pumpers
Wed Jan 25, 2023 9:47 am
thanks everyone for the posts and links. Here is one more, from a 1929 Interstate Commerce Commission report (although it notes the valuation is from 1918)
http://www.div11-mcr-nmra.info/PRRhist/f_ja.htm

by Blackseal Jim
Wed Jan 25, 2023 10:04 am
Yes . The bridge in the background is Rt 71 . I have the day off and just checked out the progress the clearing crew has made . They are currently about 600ft east of Fairfield Rd crossing in Howell

by CharlieL
Wed Jan 25, 2023 10:14 am
Don't forget George, King of England rode these rails in 1939, from Jamesburg (off the Pennsy main line) thru Freehold, brief stop in Farmingdale, to Red Bank, on his tour of The US and Canada.