I just noticed that on Google Maps you can see the old right of way from Dedham towards W. Roxbury: Zoom in enough to see the lot lines and buildings, and you'll see a string of odd-shaped lots, some of them clearly made out of the ROW and some of them clearly clipped or shaped by being next to the ROW. https://www.google.com/maps/place/Dedha ... -71.169684

by bostontrainguy
Tue Dec 01, 2020 3:14 pm
Yes, it's mostly still there. Goes right behind the McDonalds. The abutments are still on one side where it crossed Spring Street on two bridges and you can see where it runs along the edge of the supermarket parking lot at the north end where it joined the Needham Branch near Temple Street.

Only Belle Ave was built on the original ROW and two houses on Constance Road. Most of it is still intact believe it or not.
Last edited by CRail on Tue Dec 08, 2020 2:04 am, edited 1 time in total. Reason: Unneccessary quote removed.

by Arborwayfan
Tue Dec 01, 2020 5:50 pm
Mapnhrr, I think we might be thinking of two different pieces of concrete wall. The one you describe sounds like it would have been east, or maybe southeast, of the south end of the mall. That lines up with the right of way that I mentioned, which even has a vestige in a curved property line east of the where Lowes is now. (Bradlees, Sears, and maybe the hobby shop followed by Pewter Pot was a regular thing for me and my mother in the early 80s, and I'm pretty sure that the Pewter Pot was near the SE corner of the mall, near where Lowes now connects to the old mall building. My memory might be playing tricks on me, but I'm thinking of a wall that would be more or less up by Incinerator Road, where the AC Moore is now. I can imagine tracks going next to that wall, but not coming under Washington St. there--doesn't line up with the ROW.

By the way, my "Wow!" was about your picture, not my humdrum find of ROW-shaped lot lines.

I remember when I was a kid in the early 80s there was still part of the abutment left on the grocery-store side of Spring Street, too.

by SOCO11
Wed Dec 02, 2020 10:23 am
I remember the wye having a dock and freight cars when I was very young in the early 70's. It branched out in both directions but went I don't remember seeing anything ever cross the crossing towards BJ's (South?). In the other direction the right of way was very obvious through to Star Market next to the Needham line . www.historicaerials.com has coverage of the area and you can see the bridge was removed sometime between 1969 and 1971 and the market was built in the early 70's. My Father used to plow the lot and I can tell you that there were tracks under the pavement that wrecked the pavement for years until they were finally removed.

The only wall I remember was the one I saw from Pewter Pot. If I was standing in the parking lot, I saw it to my left., bordering the right side of the access road down from Washington Street. It was at an angle, looking slanted in the direction of where the Stop and Shop is now. I actually took a photo of the area as they were getting ready to build A.C. Moore. At the time, there was a concrete wall there but it looked new and lower and the embankement of Washington Street looked like it was lowered also but I don't know why they would have done that, unless it was to make the access road less steep?

It's interesting you recall the wye being in place. I'm sure I saw it when I used to go with my father in the 60s to the station sometimes where he would buy plywood (Lumber Mart) but I just don't recall it; probably I wasn't paying attention. I do recall the station itself though.

I have looked at Historic Aerials and Google Earth and do see the right of way. Actually had a print made from Historic Aerials though it was very grainy. You can clearly see the ROW passing under Washington and East Streets but the bridges are not very clear at all.

I also have noticed from driving by on East Street there is what appears to be actual or original granite blocks in back of some of the homes which I am thinking are the old bridge abutments from before the new bridge was built. The land appears to have been filled in so only the top of the bridge abutments are visible.

I will try to upload the photo I have of where the wall was.

by Arborwayfan
Thu Dec 03, 2020 5:17 pm
Ok, I think that we ARE thinking of the same wall, right up next to the access road that comes steeply down from Washington St. [Checks Historic Aerials.] OK. I think that the steel frame I remember seeing was the ruins of a building. In the 1955 and 58 photos there's a building there, definitely to the east of the old main ROW but possibly with spurs running up to it or even into it. In 1978 there's a frame in the same place, and that's got to be what I saw. In 1990-something the frame is gone but you can see a retaining wall behind it.

Also, I was wrong about Lowes, I think. it looks like where Lowes is now WAS there in the 70s, so the back of the Pewter Pot would have been very close to the former bridge under Washington St, off to your right, right.

About the wye, I can't say for sure that as a kid I actually saw a wye. What I remember is seeing a more or less triangular area with multiple curved tracks, a small wooden high-level platform for freight, I think, which I see in the aerials), and a general feeling of dejected rusty railroad. So I couldn't say whether the whole wye was there, just that I remember seeing stuff that I now know was part of a wye. It actually looks like the west leg of the wye was already gone in 1938.

About the wye, I can't say for sure that as a kid I actually saw a wye. What I remember is seeing a more or less triangular area with multiple curved tracks, a small wooden high-level platform for freight, I think, which I see in the aerials), and a general feeling of dejected rusty railroad.

That is my recollection as well, circa 1982ish?
Support the WW&F's project to Build 11!

by mapnhrr
Fri Dec 18, 2020 9:22 pm
Finally, I located a photo of this bridge before it was filled in with a large concrete wall. After seeing this photo, I do recall when it was open but never had interest in exploring it. I guess then I forgot about it until sometime later when I saw it sealed up. It does appear a little further from incinerator road than I thought it was but still close enough. The photo is from the 'Massachusetts Cultural Resource Information System' . Unfortunately the tracks are long gone. You may have to try to lighten the photo up to see more detail. I am attaching the photo.

by Arborwayfan
Fri Dec 18, 2020 10:22 pm
Neat picture. From looking at the aerials I realized that the derelict steel frame I remember was a building that was in front of a slope or a retaining wall, not attached to a wall, and it was right by the incinerator road. And the bridge in this picture, which got walled off later, was on the end of the mall closer to Dedham Ctr, going under Washington St. I am glad you showed it to be, because I had no idea it was there.

by mapnhrr
Sat Dec 19, 2020 9:52 am
Yes, I am so glad I got to see it again. If you look closely you can see there is 'Good Will' trailer parked under the bridge, out of the way of the parking lot. I'm thinking it may have been parked there to accept donations or just stored there for some reason temporarily.

Pewter Pot was to the right of this photo and Bradlees even further down on the right. It would have been cool to see a train coming from West Roxbury (the stop before this bridge was Spring Street, West Roxbury) steaming it's way under the bridge towards Dedham Center.

by mapnhrr
Sat Dec 19, 2020 2:01 pm
I am attaching a recent photo from Google Earth which I believe is what the location looks like today.

by MBTA3247
Sat Dec 19, 2020 3:13 pm
A.C. Moore is about a block away. Tracing what's left of the ROW up from Dedham Center, the bridge would've been by the southeast corner of Lowe's.
"The destination of this train is [BEEP BEEP]" -announcement on an Ashmont train.

mapnhrr wrote: ↑Sat Dec 19, 2020 2:01 pm I am attaching a recent photo from Google Earth which I believe is what the location looks like today.

No, it's not here. It was to your right at the end of the parking lot in the corner behind Lowes where Washington Street is elevated. 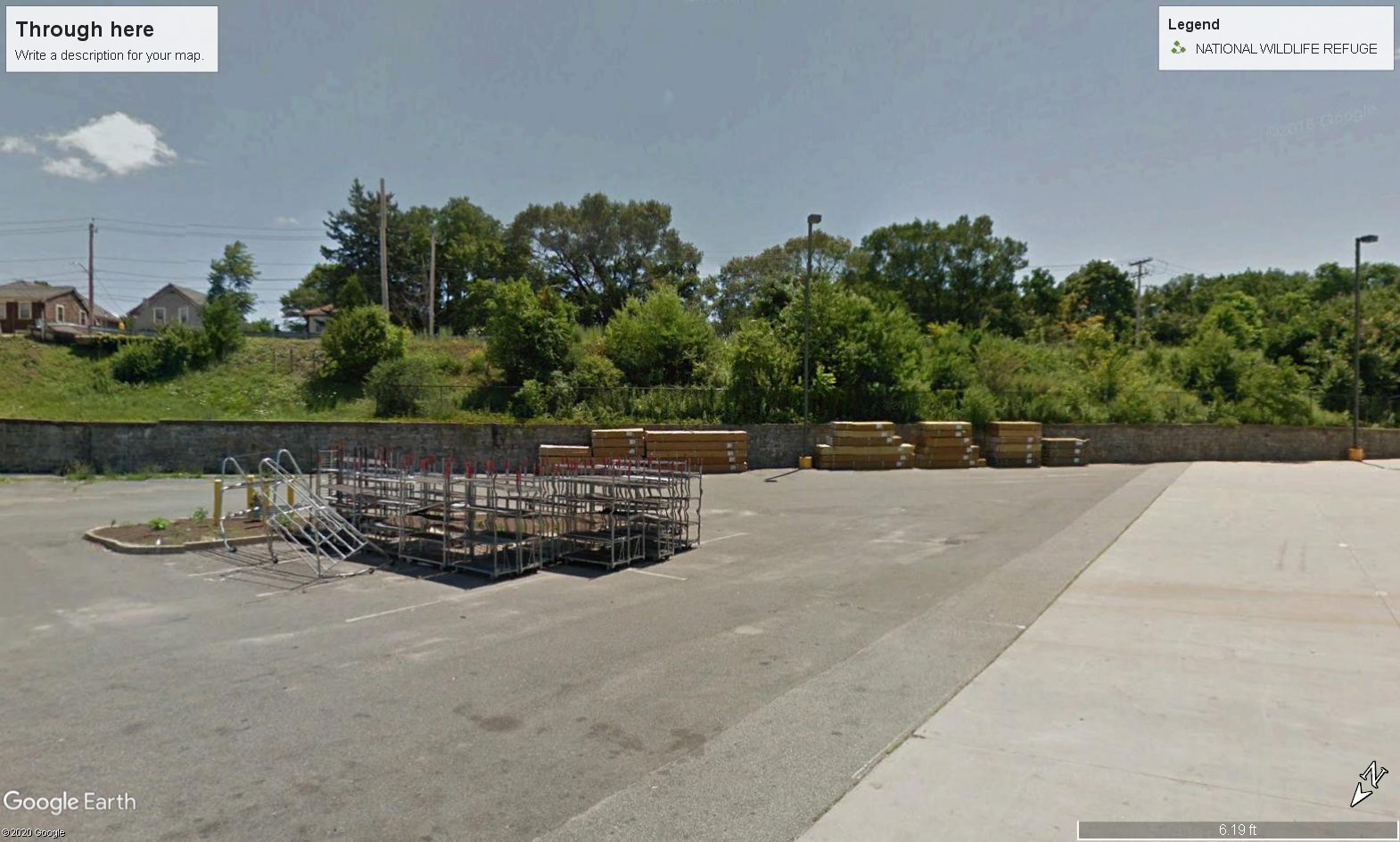 by mapnhrr
Sat Dec 19, 2020 11:09 pm
Interesting. The mall configuration has changed since the late 70s or early 80s so maybe that's playing tricks on me. I figured at the most, it may have been a little further to the right but not that far over to Lowes. At least looking from where Pewter Pot was, it was to the left. So if in fact it really was where you say Lowes is now, I would be very surprised.