CSX to acquire Pan Am Railways

by bostontrainguy
Mon Sep 27, 2021 8:55 am
Just a quick follow up to my post about the industrial land for sale in Everett thinking about potential new rail served business for PAR/CSX. Everett is not on board:

“We don’t want to be people’s dumping grounds.” Big change could be coming to Everett’s industrial riverfront
September 24, 2021
Two major sections of Everett’s industrial waterfront, totaling some 140 acres, are being primed for redevelopment, potentially transforming a landscape dominated by an old power plant and massive oil storage tanks into biotech labs, housing, hotels, and restaurants.

The Casino will probably change that area forever. Existing industrial properties are probably in jeopardy with Everett obtaining eminent domain rights to acquire property like Exelon which is not for sale. Everything there might now be in jeopardy.

by F74265A
Mon Sep 27, 2021 11:15 am
Think luxury condos not industry for Everett
Boston area government has long been following policies that have been intentionally driving out industry. And then the politicians wonder where the jobs went!

by type 7 3704
Mon Sep 27, 2021 6:09 pm
The Boston area has plenty of jobs in knowledge-intensive areas like healthcare, biotech, software development, higher education, and various high tech startups, which don't really need large amounts of freight delivered by railroads. The area also added about 2.5x more jobs than housing units in the past decade, which has contributed to a housing shortage, and very high land and real estate values.

Even if the Boston area was more friendly to industry, the very high land prices don't make it a reasonable place to establish heavy industry or other large industrial work that don't need a large number of very high-educated workers, versus going further out of the city where the land is much cheaper and where you can still find workers. This has been reflected in the general movement of heavy industrial operations away from the area, and with that, the retreat of freight railroading from Boston (e.g. CSX's closing of Beacon Park in 2013, and the end of the B721 local in 2018).
Last edited by MEC407 on Mon Sep 27, 2021 6:29 pm, edited 1 time in total. Reason: unnecessary quoting

We will still need the produce and the cement and the scrap metal dealers and the distribution centers and the C&D businesses and the garbage and trash exporters and the lumber and building suppliers . . . etc., etc., etc.

And although you are right saying these businesses are probably better situated outside of the city, say along 128 or 495, just try to put these industries out there. They couldn't develop Westborough Yard like they wanted (ideal Beacon Park replacement), Woburn has held up NETransit forever (an otherwise hazardous wasteland), Framingham has hassled the railroads there for years even though there are three yards there (unused CP/Adesa has great potential and lots of space) . . . etc.

The NIMBYS and the environmentalists will crush you.
Last edited by bostontrainguy on Tue Sep 28, 2021 7:27 am, edited 3 times in total.

by F74265A
Mon Sep 27, 2021 7:08 pm
At some point I think the Boston area nimby folks will figure out that, unless they want a big pile of c&d and municipal waste in their own back yards, they will have to have a railroad to haul it away to a rural location free of knowledge workers who hate trains.

I don't believe there's anything new here except perhaps this nuance of the takeover transition plan:

Once CSX acquires control of PAR, the Springfield Terminal Railway would continue to operate both the PAR and PAS lines. After agreements are negotiated and signed with labor unions, the Springfield Terminal would merge into CSX and the Class I would assume operations of PAR lines, with G&W subsidiary Berkshire & Eastern Railroad becoming the contract operator of PAS lines.

I didn't realize that B&E/G&W would become contract operator of the CSX portion of PAS after a significant (?) period of time after initial acquisition.

bostontrainguy wrote: ↑Fri Sep 24, 2021 8:53 am Massive area of scarce industrial property with nearby rail is up for sale in Everett. No idea if this is going to mean anything but what an incomparable opportunity for rail related businesses in the Boston area. 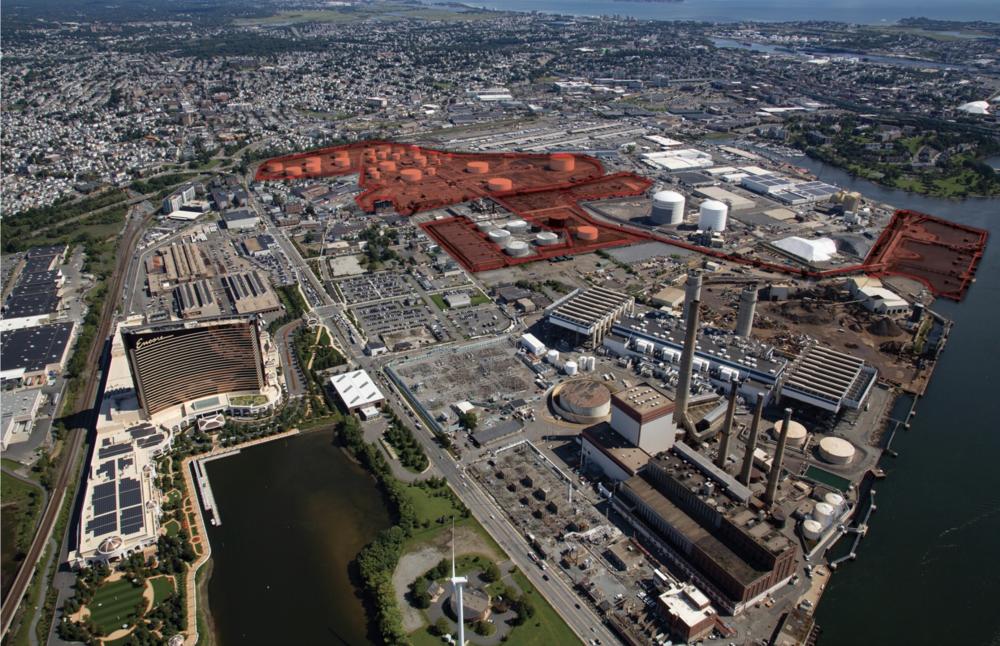 Old power plant on Mystic River and nearby gas tanks, 140 acres all, are being eyed for redevelopment

And if Exxon-Mobil sells the primary tank farm that supplies petroleum products to Massachusetts & New England, that won't increase the cost of gasoline, home-heating oil or diesel fuel in Massachusetts, will it? When this sells the new owner will be rail-served - by passenger trains only. I can see this from Everett's viewpoint, lets get rid of this nasty, smelly industrial marine terminal. And a power plant can be moved a few miles away without causing a problem, assuming it is near a natural gas pipeline (oops, sorry, cancelled that new natural gas pipeline a couple of years ago. All the others over capacity, sorry)

by johnpbarlow
Wed Oct 20, 2021 7:15 am
Hundreds of yea/nay commentary pages were filed with the STB re: CSX's Pan Amquisition:

State of Vt (Vtrans) says "no, no, no!" as it believes its NS/CSX interchange traffic is threatened in unspecified ways
https://dcms-external.s3.amazonaws.com/ ... 303095.pdf

B&E/G&W explains they won't disrupt competitive balance as B&E is just the contracted operator of the entity, PAS, who sets the rates and haulage agreements for owners NS and CSX.
https://dcms-external.s3.amazonaws.com/ ... 303099.pdf

And lastly CSX files 368 pages documenting "...responses to all comments, protests, requests for conditions, and other opposition, including to DOJ and USDOT filings, along with rebuttal in support of the Revised Application and Related Transactions..."
https://dcms-external.s3.amazonaws.com/ ... 303102.pdf

Question: in its filing, NS says multiple times when supporting its intent to operate double stack IM service to/from Ayer via the B&A route that currently Hoosac Tunnel clearance limits require NS to filet/toupee containers at Mechanicville. Is such an operation happening on a daily basis, sporadically, or never? Seems to me if PAS was removing lots of top containers in double stacked wells bound for Ayer on 22K, that there would need to be a bunch of empty spine or well cars available to hold these re-located containers for conveyance to Ayer. Or are the top containers being fileted at Mechanicville and then drayed to the metro Boston area?

by newpylong
Wed Oct 20, 2021 8:56 am
I don't believe that operation is occurring at the present - either way sucks. Make up a much longer train of singles at Ayer or CHI or do the fillet/toupee at XO.

johnpbarlow wrote: ↑Wed Oct 20, 2021 7:15 am Seems to me if PAS was removing lots of top containers in double stacked wells bound for Ayer on 22K, that there would need to be a bunch of empty spine or well cars available to hold these re-located containers for conveyance to Ayer. Or are the top containers being fileted at Mechanicville and then drayed to the metro Boston area?

Many of the containers taken off are bound for the NY Capital Area. Ayers on the bottom, NY's on the top. So for a single train slot you limit the growth potential. Anything else is probably drayed but I don't know for sure. If it's done that way the railroad probably eats the cost of the extra dray.

Put the Ayer train on the B&A and you can double the number of containers you carry, and still run a dedicated Mechanicville train.

by ANDY117
Thu Oct 21, 2021 12:22 pm
Mechanicville hasn't done the filet/toupee in at least a year. 22K comes in with the Mechanicville intermodals on the rear, chops them off on the IM tracks, and continues on to Ayer. 23K does the opposite when it arrives, and it also picks up empty autos if ordered to.

The whole filet/toupee process was time consuming, and threw the schedules off both for the trains, and the intermodal crews at Mechanicville. Train lengths were limited as well because both tracks only hold 4,000' each.

When they were doing it, Mechanicvlle containers rode on top, Ayers on the bottom.

"Likewise, ordering a separate replacement for B&E would
substitute this agency’s judgment for that of the very party who has the most to lose – NS, and
without a showing that having B&E operate the PAS Lines creates a competitive or operational
problem for NS or PAS and their customers, none of whom have requested specific conditions or
continue to have an objection to the transaction. In short, the DOT and VRS/VTrans proposals
do not alleviate a significant competitive problem, have not been shown to be operationally
feasible, are not supported by any shippers, and are not narrowly tailored"

"Indeed, not one shipper has expressed concern that the transaction reduces their competitive options or that the
settlement agreement would not preserve NS’s ability to compete against CSXT. "

"Third, and perhaps most important, VTrans simply ignores that adverse impact. Its
proposed remedy could preclude the substantial public benefits that rail shippers and local
communities across New England would gain from the Merger and Related Transactions. Those
benefits are real. Even VTrans’ witness Mr. Cunningham acknowledges that “I can see many
aspects over the overall transaction benefiting the New England region and increasing
competition.”