by poppyl
Tue Feb 23, 2010 3:10 pm
I keep hearing quite a lot about the Corridor project to the south of Hagerstown but very little about what is or will be going on between Hagerstown and Harrisburg. Can someone provide some information? Is the issue of the Lemoyne Cutoff coming up again or is the plan to bypass Enola and stay south of the city?

by Arlington
Mon Mar 29, 2010 8:51 pm
The governors of the states of AL, MS, VA, PA, and TN are pitching the Crescent Corridor for what ( I think ) is either Phase 2 or Track 2 of the TIGER/Stimulus spending in an op-ed in the Washington Post (Full article here http://www.washingtonpost.com/wp-dyn/co ... 02404.html


Our five states have joined together in a public-private partnership to apply for $300 million in federal funding to develop the corridor, which would dramatically increase rail capacity along the route and represent one of the largest additions of freight transportation capacity since the Interstate Highway System in 1956. The federal money would leverage more than $140 million in state investment and the $264 million that Norfolk Southern Corp., whose freight trains operate along the route, has committed to the project.

A study by the transportation consulting firm Cambridge Systematics estimates that, over the next 30 years, the Crescent Corridor project would return $25 in economic and environmental benefits for every dollar invested.

by SecaucusJunction
Tue Mar 30, 2010 7:36 am
Is there a time line on when this whole project is going to be completed and when trains will start rolling?
I think it may be possible that NJ Transit might not be the perfect, infallible organization that most people assume it is.

SecaucusJunction wrote:Is there a time line on when this whole project is going to be completed and when trains will start rolling?

Its more like they are doing what they can, when they can. Already working with Virginia, speeded up the process of adding passing tracks and signals its B-Branch (previously dark) which ties between the I-95/85 and I-81 parallel sections at their head in Virginia), and is working all along the I-81 route to add intermodal terminals.

The more help with finance they get, the faster it goes. Reall,y its a question of whether the states want to accelerate the corridor work to the point that they don't have to widen I-81.
"Trying to solve congestion by making roadways wider is like trying to solve obesity by buying bigger pants."--Charles Marohn

All "what's it about?" questions are answered here on NS' official Crescent Corridor site.

To answer your question: No, electrification isn't part of this. This is about making money moving freight, so it focuses on adding intermodal terminals, (passing) tracks, and (double stack) tunnel clearance.

But let's keep this thread devoted to "how quickly is it happening."
"Trying to solve congestion by making roadways wider is like trying to solve obesity by buying bigger pants."--Charles Marohn

by SecaucusJunction
Sat Apr 03, 2010 9:52 am
If Norfolk Southern can convince the states to give them money instead of giving it to the highway funds AND be able to take enough trucks off the road so that they don't have to widen the roads at all, that will probably be one of the biggest accomplishments I've ever seen by a railroad. Even making a small dent in the truck traffic on the roads would be a huge increase in traffic on the railroad.
I think it may be possible that NJ Transit might not be the perfect, infallible organization that most people assume it is.

by Arlington
Wed Sep 08, 2010 10:19 pm
Any news on the possibility of a new line from Culpeper to Front Royal (including a 4 mile tunnel under the Blue Ridge?)

As recently as 2009, NS was actively studying cutting off the current "V" shaped routing on the top end of its Piedmont line in the Crescent corridor: where trains coming up the I-95 alignment today pass through Culpeper VA and run northeast to Manassas before turning nearly due west back out to Front Royal.

Under study is a cutoff that would essentially halve the distance and avoid the current and future VRE commuter service in the Manassas area.

The cutoff would run from approximately Culpeper VA northwest to Front Royal through Rappahanock County. Both Culpeper and Front Royal are exurbs of DC and are each at about the theoretical limits of a daily VRE commute (at about 65 miles from DC Union Station). Bypassing both, along with Manassas would not only speed North-South freight routings, it would enable NS to sell the Front Royal-Manassas and Culpeper-Manassas routes to VRE for a handsome price.

http://rappvoice.com/?p=1316
"Trying to solve congestion by making roadways wider is like trying to solve obesity by buying bigger pants."--Charles Marohn

The Culpeper Cutoff is a concept that should be on the radar screen. It would involve construction of a new double track railroad, engineered for 60 mph intermodal train speeds, between Culpeper (on NS’s Manassas-Charlottesville line) and near Linden (on NS’s Manassas- Front Royal line). At 36 miles in length, the Cutoff would reduce the distance traveled of each Crescent Corridor-Piedmont route train by over 38 miles and reduce running time by more than an hour. Shenandoah route trains using the Cutoff would incur a few more miles in distance, but save running time. The Cutoff – or a comparable infusion of new capacity – will be necessary long term to accommodate NS traffic growth beyond 2035, and it might be needed sooner if I-81 Corridor traffic is consolidated on either the Piedmont or Shenandoah lines.


According to page 4-3 (page 93 in the .pdf) of the Draft Final Report of Feasibility Plan for Maximim Truck to Rail Diversion in Virginia's I-81 Corridor (find it here on the Virginia DPRT website: http://www.drpt.virginia.gov/studies/default.aspx
"Trying to solve congestion by making roadways wider is like trying to solve obesity by buying bigger pants."--Charles Marohn

by Arlington
Thu Sep 09, 2010 7:44 am
Attached to this post is a map showing the Culpeper Cutoff concept (A 60mph intermodal route from Culpeper VA to Linden VA that would shave 38 miles and 1 hour from Piedmont-to-Pennsylvania routings)
Culpeper-Cutoff-Map.png
You do not have the required permissions to view the files attached to this post.
"Trying to solve congestion by making roadways wider is like trying to solve obesity by buying bigger pants."--Charles Marohn

by Arlington
Thu May 31, 2012 10:59 pm
Reviving an old thread...On the "thefutureneedsus.com" site, NS has not been doing a good job of updates. But I note that under "Project Status" most of the intermodal facilities are due to come on line in the coming months:

Does anyone have more details?
"Trying to solve congestion by making roadways wider is like trying to solve obesity by buying bigger pants."--Charles Marohn 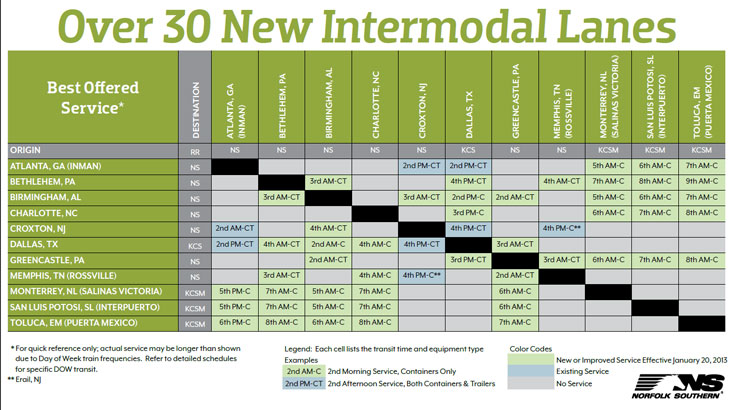 by Arlington
Thu Apr 04, 2013 7:00 pm
and here is a nice map showing the extensions:
You do not have the required permissions to view the files attached to this post.
"Trying to solve congestion by making roadways wider is like trying to solve obesity by buying bigger pants."--Charles Marohn