Well there goes 2 minutes and 34 seconds that I just wasted. The video is a "nothing burger." Not like it was chock full of derailments or safety violations. Folks other than the freight trucks under the 7470 tender there is nothing to see.

ProRail wrote: ↑Thu Aug 04, 2022 5:15 pm Well there goes 2 minutes and 34 seconds that I just wasted. The video is a "nothing burger." Not like it was chock full of derailments or safety violations. Folks other than the freight trucks under the 7470 tender there is nothing to see.

I don’t get it either. Kinda pointless if there’s nothing other than a video of 7470 and a fire filter
ConwayScenic252
Main Power for the Mountaineer since 2011. 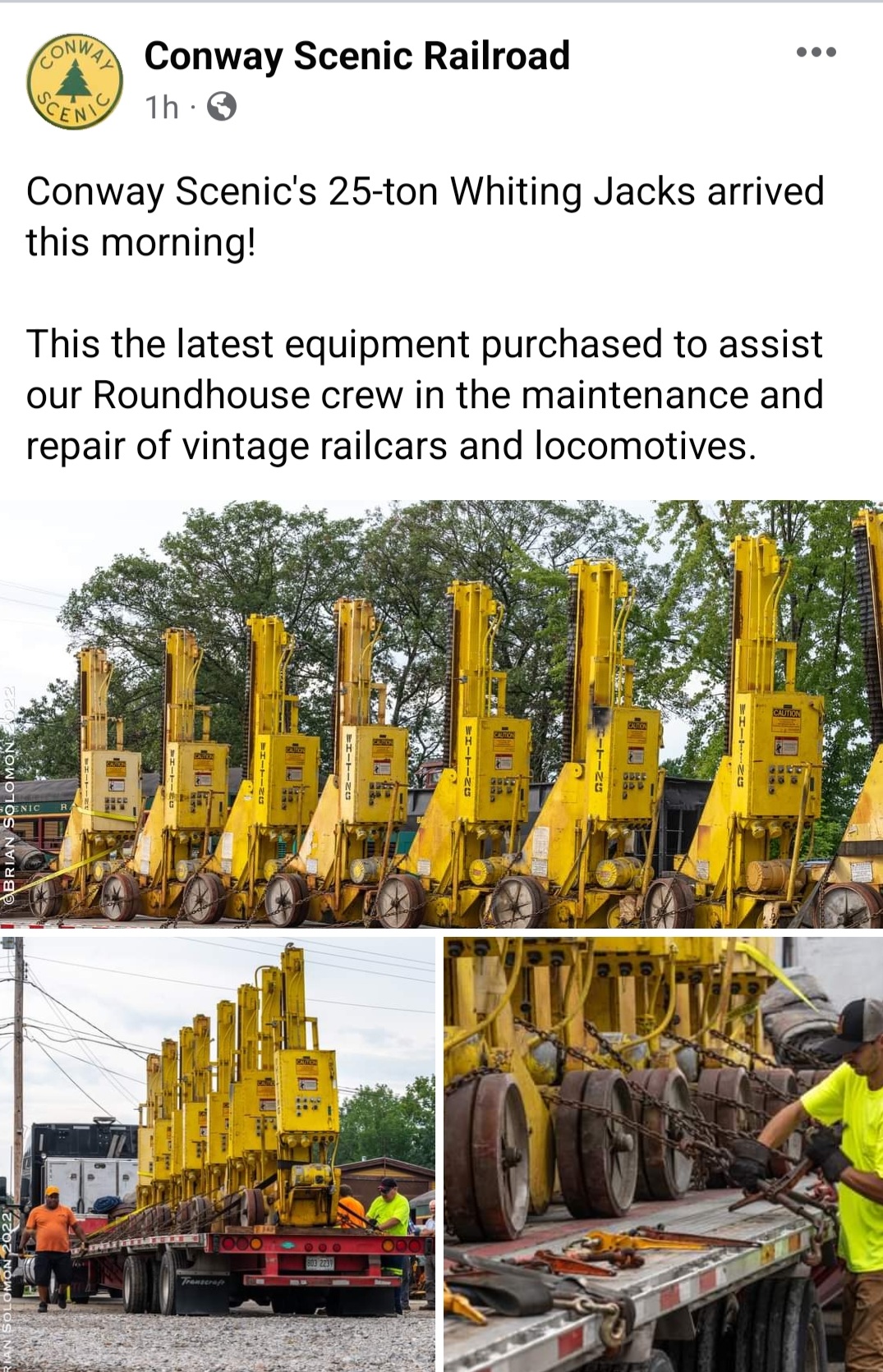 by Westbound31
Fri Aug 05, 2022 8:21 pm
Conway Scenic turned 48 years years old yesterday. No mention of it at all on their Facebook or anywhere else as far as I can tell. But, this place resembles nothing of the railroad we all knew so I guess it’s fitting for swirk/solomon to make no mention of it.

Im guessing the jacks are for lifting up the passenger cars to remove trucks but not sure why they’d be needed. We never had an issue getting maintenance done without all of this new equipment. Unless maybe they plan on derailing several more times at the golf course crossing and the jacks are for that.

by CSRR573
Fri Aug 05, 2022 9:01 pm
I wonder whyt they need 8 of those jacks,we have those same jacks at Southampton street and have 4. Thats more then enough for Amtrak so why would CSRR need 8? We use them to lift P42's, and ACS's and all of Amtraks rolling stock. We just have different lifting pad adapters( 25 tons and 35 tons). Those jacks need 480V to operate, so its interesting to see how they will use them and there's no way they can use them inside the roundhouse. Its a shame because that money could have been spent on cleaning up the rolling stock. The fact that they never mentioned the RR's birthday anywhere really drives home the fact the ownerships doesn't give a ****about the people that made the RR great

by ConwayScenic252
Sat Aug 06, 2022 6:22 am
I’m surprised Swirk forgot about it. Or maybe he didn’t, because Conway Scenic doesn’t have so much MOW or derailments, that’s the Swirkus Circus. That’s what this is.
ConwayScenic252
Main Power for the Mountaineer since 2011.

by NHV 669
Sun Aug 07, 2022 6:54 am
It would be nice if they had someone who could better [and accurately, at that] market the railroad and its equipment, instead of their personal photography business.

Especially when their social medias advertised "vintage EMD power" for yesterday's Mountaineer, which ended up being 4268/573, yet respond to someone in the same post telling them 216 would be in the consist. (It wasn't at all) Why BS people who actually care about that kind of thing?
Avatar: NHV 669 at the south end of the "Pompy" in White River Jct., VT on 4/29/1993. Photo by Richard Roberg.

by arthur d.
Sun Aug 07, 2022 8:36 am
It may not be intentional. This happens in the media all the time. Look at any service interruption, train vs. car , train vs. trespasser news story. They're riddled with inaccuracies. The person writing the release may be confusing one story with another, may have been given inaccurate information, or there may have been a last minute change.

All of their diesels are "vintage EMD power." Seems kind of strange that they'd state it that way, as if there are non-vintage diesels on the property.
MEC407
Moderator:
Pan Am Railways — Boston & Maine/Maine Central — Delaware & Hudson
Central Maine & Quebec/Montreal, Maine & Atlantic/Bangor & Aroostook
Providence & Worcester — New England — GE Locomotives

All of their diesels are "vintage EMD power." Seems kind of strange that they'd state it that way, as if there are non-vintage diesels on the property.