HAHAH you've clearly never ridden onboard when hes in charge of it vs when some one like Court, Gordon or Joe was behind the throttle. Dudes a cancer to the railroad plain and simple

by ConwayScenic252
Fri Jul 01, 2022 5:21 pm
The platform restriction isn’t COVID. I was at Strasburg RR today and it was open and free to public. Met a knowledgeable member who told me some things I didn’t know. Railroad Museum of PA had a model display out and were very friendly. Same thing with Hobo and Clark’s. Open and friendly. Nothing is a COVID issue, that pandemic era has passed and things should be open. Should, is the key word. The swirk/soloman era is really kicking in now, there are zero employees from the Russ/Paul era. At this point I’m repeating things that have been said since the Mass Bay drama last December. Swirk cut off all railfan connections after that. I was really excited what was in store when he first purchased the railroad- Russ went out with a bang with the Red Ball Special and it was interesting and exciting to see what Swirk would do. While Derek was with Swirk, lots of things were done right. The 501 had a cosmetic restoration and 4266 led the Red Ball Special. 1751 appeared many times, 252 was a normal sight for the Notch Train and everything was perfect. It’s sad to see this railroad go down this way, if anything I’m not too keen on riding anymore. A photographer as the marketing manager isn’t good.
ConwayScenic252
Main Power for the Mountaineer since 2011.

Then I will tell you, unequivocally, that you have zero idea about steam operation and proper train handling. You are a "fan"....which is absolutely fine, but you need to understand that just because someone is somewhere doesn't mean they know what they are doing. And P42.....I have read some real weird stuff on these pages, but honestly, the 7470 for sale and get a smaller engine theory went right out the window with 108 in 1990. The railroad is too big for a smaller engine. The grades would smoke anything smaller. And a bigger point, if you don't know how to maintain a regular size engine, what makes you think they can maintain a smaller one? Lol......all these attractions going with big stuff (1309, 2102) and you and you want to downsize? I'm glad you aren't managing my business.....
--------Bill------- http://www.preciousescapes.webs.com and
https://www.facebook.com/#!/pages/Preci ... 4390695506

Westbound31 wrote: ↑Fri Jul 01, 2022 4:50 pm The last shop foreman left because he was fighting with Swirk over getting the new dome car during the winter. He kept telling swirk it was a bad idea and he needed the crew in the shop to get the equipment ready for the upcoming season. But swirk insisted on sending plow trains through the Notch. Foreman told him they’d derail and swirk wouldn’t take that for an answer. Many derails and crew times wasted later, the operation was canned but not before tempers flared and a railroad qualified, hard working mechanic was replaced with an airplane mechanic.

I remember the last attempt, there must have been at least a 5-10' drift at Gateway, and there had been a decent storm less than a week before. They didn't even make it to Fourth Iron. 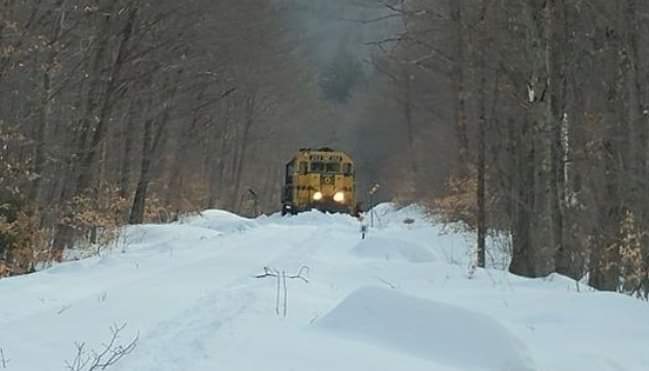 HAHAH you've clearly never ridden onboard when hes in charge of it vs when some one like Court, Gordon or Joe was behind the throttle. Dudes a cancer to the railroad plain and simple


Don't get me wrong, Courtney was my favorite engineer, not even Swirk can be better than him. 7470 was his baby, shame he retired, 7470 would be safe with him at the throttle. I'd give anything to see ol' Court run that steamer again.

CSRR4266 wrote: ↑Fri Jul 01, 2022 6:55 am I sadly can confirm & agree with all these comments. When they first came to town they came inerent gasket because it was cheaper and modifying it upon its arrival. Ever wonder why a certain dome car leaks in the rain?

Ha, I'd completely forgot about the gaskets. When we ran into the issue I contacted Webb over at Webb Rail as they had just redone all the windows in one of their domes and they gave me all info that we needed to get that done and yup too expensive to do it right so let's Jerry rig it. Now it has that nice indoor waterfall feature when it rains.

And don't forget when he turned his back on the Cotton Valley motorcar club, because he didn't want any volunteers anymore.

No disrespect, but if you hop in the engineers seat of 7470, you’re not going to operate it like court, that’s something that takes experience, you got to learn her language, listen to what she’s saying to you in audible & sensory queues, too much pressure, not enough, too cold, too hot, reverser too far, not far enough, needs more lubricant, too much, etc… Court knew her inside and out, literally & figuratively. Rudy had the experience of steam and working the brake valve system she is equipped with that many engineers today have never touched, let alone heard about.

by Reader#108
Sat Jul 02, 2022 9:53 am
Rudy definitely taught Court. And Court taught us all so many different things. We were so fortunate to be there and be trained by THE BEST. Rudy, Court, Gordon, Bobby, Fred.....just to name a few.

4266, anyone who thinks they are just gonna hop in the seat has a narrow view. It is a long term expenditure to get there. And not just anyone can sit in it as you know. You have to be able to feel her....to listen when she talks, to respond to what she is saying....operating a Locomotive is so much more than turning a key and going. It's all in the feel.
--------Bill------- http://www.preciousescapes.webs.com and
https://www.facebook.com/#!/pages/Preci ... 4390695506

NHN503 wrote: ↑Thu Jun 30, 2022 12:06 pm100% this.
I wouldn't even remotely consider going back as long as he's there. I mean even simple things are done backwards. They ran a Mk4, and are now out there stuffing ties...seriously come on now. Why spend thousands of dollars, to have a contractor tamp and surface to then have a crew of people with little to no experience go out and stuff ties and disrupt that surface? Oh and purchase relatively new equipment for that inexperienced crew to use.

This is exactly what I mean. It blows my mind to see railroaders with years of experience canned or forced out to be replaced by employees with zero or non relevant experience. You spend thousands on surfacing and then go out and do that. But that’s the thing, Swirk doesn’t seem concerned about spending/financing.

To give an example, on average for a standard gauge steam locomotive, between crews, firing up, oil, water etc., you can expect to have an operating cost of right around $2,000 per day to run steam. In the past few weeks, we’ve seen 7470 placed mainly on display for “training” and for Swirk whistle blowing. If you’re not running revenue service with that locomotive then all you’re doing is eating the daily costs to run it.

And I’m curious as to what training is actually happening. Seems more to me that Swirk is just using it as an opportunity to blow the whistle and for Solomon to plant it in front of the radio stations that were at the depot yesterday. Other than that, she’s sitting in the yard blowing the safety every dozen or so minutes and then being put away. Then she gets fired up the next weekend and the process goes on. Again, anyone that knows steam boilers, doesn’t have to be a steam locomotive either but any steam boiler, knows that boilers expand a fair amount when fired and filled with steam pressure and contract when cooled down. There’s a lot of movement happening to that 101 year old boiler and the rivets holding it together. Back in 1921 boilers weren’t welded. Rivets hold the components of a boiler together at butt seams.

The rapid expanding and contracting of the boiler is what concerns me. When the guys from Maine are there I’m confident the boiler is in good care. But when they aren’t, I guarantee you she’ll be fired too quickly if she’s not already. I don’t know if the guys from Maine are the ones firing her on startup or not. The guys at the Colorado Railroad museum will start firing an engine on Thursday if it’s expected to be running on Saturday.

And to the comments on financing, if you look up Profile Mountain Holdings and Profile Mountain LLC on public records, you can see the whole financing picture. Like I said an equity loan was pulled against the property in mid-May for the amount of $200,000. I assume the new dome car but who knows with the way things are being purchased there now.

Westbound31 wrote: ↑Sat Jul 02, 2022 7:40 pm Like I said an equity loan was pulled against the property in mid-May for the amount of $200,000. I assume the new dome car but who knows with the way things are being purchased there now.

Probably for some more busses or a plane or boat. Who knows. Also what ever happened to the generator they bought to make an HEP car for the notch train?

Probably sitting in the north yard somewhere waiting for the Silver Cascade to be butchered so it can be installed.

From what I had heard Thursday, the dome car price was $750,000. Plus whatever he spent on some old RBRX car and the Sailsbury Beach that he also reportedly bought recently.

I'm guessing the 200k was for the surfacing contractor and the new hyrail and the new to him MOW equipment I saw at Crawfords the other day.