What was the deal with the bridge failing? And would it make sense to bring service back to Ocean City one way or another?
[/quote]

October of 1981, service to Ocean City ends due to the ring gear failure of the swing bridge at Crook Horn Creek. It gave the railroad the excuse it needed to abandon an already dwindling service to the island.

To the best of my knowledge, the former RoW is owned by NJ Transit. Aside from having larger issues to currently deal with, there is no desire in returning service to Ocean City. Residents of the island have no interest either, in having "noisy trains" disturbing their quiet town.

It will never happen

OC property owners in the south end where the railroad crosses into the City managed to nimby a bike path going on the old ROW. There are some folks down there that draw a lot of water who did not want to see bicyclists from their porches. Rail service is a non-starter-- the only scenario in which I could envision it happening is if there is major shore protection infrastructure work needed and they needed to bring in fill or structural materials via train. The ponds in Cape May County Park North (adjacent to the existing ROW in Palermo) served a similar purpose many years ago when sand was mined and shipped across the bay via rail to Ocean City to fill in the marsh land to build houses.

NJTransit transferred the ROW in Ocean City (which includes Haven Avenue from Crook Horn Creek to 10th Street) to the City in 2003. There is a reversion clause in the deed forbidding resale of the property or private use, though some folks have repurposed the ROW for flower beds and vegetable gardens. The City recently hired a consultant to examine using the ROW for some kind of flood berm, though the berm would need several feet of fill, reinforcement, and considerable extension to be of any use for preventing flooding or for qualifying for crucial matching funds from FEMA.

NJTransit owns the entire ROW remaining in Upper Township except from the track length from Greenbriar Road in Marmora east to Beesley's Point. Atlantic City Electric owns about 1.3 miles of ROW before the track enters the power plant property. As of 2017 the ROW from Route 9 east into Ocean City was still accessible on foot. You can park at the County Park lot then walk south to the dirt road. The typical warnings about ticks and poison ivy apply. The Parkway bridge is still sufficiently high to accommodate future service.

Thank you very much for the insight! I honestly don't ever see rail traffic returning to Ocean City.

Here is a link to my photo album of what remains if the former Ocean City Branch. It begins at CP PAL in Palermo, and continues out through the marshes and into Ocean City:

by glennk419
Thu Nov 19, 2020 5:31 pm
As Ben noted, the failed ring gear was merely an excuse to terminate service. I believe the gear failed during a "test" opening. The bridge was structurally sound and here were actually spare gear sections onsite that could have been easily replaced. It's ironic that the failure happened to occur while in the open position and I have to wonder if things would have been any different had there been rolling stock or locos on the island.
Glenn

glennk419 wrote: ↑Thu Nov 19, 2020 5:31 pm As Ben noted, the failed ring gear was merely an excuse to terminate service. I believe the gear failed during a "test" opening. The bridge was structurally sound and here were actually spare gear sections onsite that could have been easily replaced. It's ironic that the failure happened to occur while in the open position and I have to wonder if things would have been any different had there been rolling stock or locos on the island.

I doubt things would be any different. They abandoned the ACL once, and I'm sure that line is always at risk of NJT pulling the plug again.

Ocean City rail transport would make sense in the summers, but that's only three months out of the year. And there's no year round stuff AFAIK down there like casinos and the like.

by Bracdude181
Sun Nov 22, 2020 8:22 am
@JohnFromJersey Correct. The line doesn't really have any potential freight customers either. The only places in Ocean City that could use rail service are the water treatment plant, and the lumber distributor downtown. I'm not sure if Seashore Lines could justify opening the line just for these two. Plus, the ROW runs behind lots of houses, and I'm not sure if the homeowners would take to kindly to a train that's practically in their backyard. It's kind of a shame as this part of the line has some gorgeous scenery to it.

The other portion, which runs to the BL England Power Station is also in an unusual situation. I suppose excursions are possible here, but putting a station anywhere will be a challenge. I would personally put one near the power plant and have a nice little beachside picnic spot. As for freight, only one potential customer which is a place that makes boat docks. (Forgot the name) If there's a demand for it, rail/truck transloading station could be built on the BL England property. However, this too may not be possible.

The NJ state government is currently working with a company named Orsted on building hundreds of offshore wind turbines about 15 miles or so from the coast. Orsted is currently looking where they can put a transfer station to feed the power into the grid. The station at BL England is one of many on the list, and I'm not sure if Orsted will be willing to let anyone else use the property if they take it over for the project. Hopefully, Orsted will have the turbine parts and other electrical components come in by rail to BL England, which at the very least means the line would be used in the future. If only for a little while.

If none of this happens and an excursion service can't be done on this line, then railcar storage would be a good use of the track. There is one other option though.

In recent years, rail excursion companies have been doing excursions on tracks unsafe for standard equipment with rail bicycles. These are small, 4 wheeled carts that are pedal powered. Even better, doing this might be possible in conjunction with railcar storage, but I'd have to look into that.

In any case, I'm hoping that something can be done with the Ocean City Branch once the pandemic ends. It's future is up in the air now that BL England is closed. Maybe Seashore Lines could lease the line from Conrail and turn it into a small branch line for them, while the Tuckahoe to Cape May line becomes a mainline with freight and passenger service. I do have something I'd like to say on a Cape May to Winslow passenger train, but I will leave that on the passenger train division of this forum.

Have a good Thanksgiving guys.

by Bracdude181
Mon Nov 30, 2020 11:21 am
@liftedjeep Interesting. I'm wondering why they need a fourth engine seeing as how they only do excursions once in a while and cars are only brought into and out of storage every so often. I do know that at least one of those engines will be transferred to Lakehurst once the sand trains start up, (Hopefully GMTX 2015) so that could be why there's a fourth engine all of a sudden.

by Bracdude181
Sat Dec 05, 2020 10:32 am
I recently found out through a friend that the last trains to go from Lakehurst to Clayton Sand were run with GP38s that were on lease from Conrail at the time. Supposedly there was three engines. Would anyone know what the numbers of these engines were?

Bracdude181 wrote:I recently found out through a friend that the last trains to go from Lakehurst to Clayton Sand were run with GP38s that were on lease from Conrail at the time. Supposedly there was three engines. Would anyone know what the numbers of these engines were?

Ashland Railways purchased GP9's #7432 and #7433 from Conrail. They were assigned to their Pine Belt Div, renumbered to #32 and #33, and retained their CR Blue. I have never heard of GP-38's down there, It could have happened. Maybe some pictures will surface one day.
I've been here since Railroad.Net 1.0 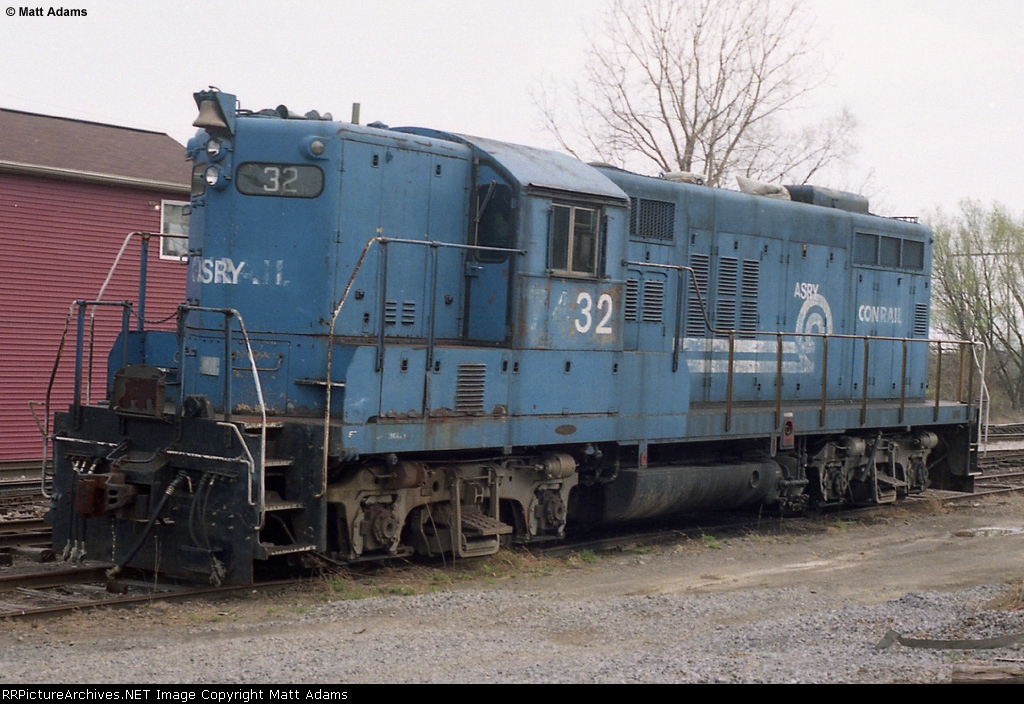 by David
Tue Dec 08, 2020 9:54 pm
I believe those engines were painted green with "Pine Belt" in yellow. Saw both of them at Clayton Sand down in the loading zone at the plant.
David-Moderator: New Jersey Railfan, L&HR, NYO&W and L&NE, Forums

David wrote:I believe those engines were painted green with "Pine Belt" in yellow. Saw both of them at Clayton Sand down in the loading zone at the plant.

Both GP-9's #32 and #33 retained CR Blue until they were transfered to OH. What was green and yellow?
I've been here since Railroad.Net 1.0