timberley wrote:...the car had stopped and started once he saw how much time he had. Illegal, yes...

Whenever a person driving a vehicle approaches a highway and railway grade crossing and a clearly visible or positive signal gives warning of the immediate approach of a railway engine, train or car, it shall be an offence for the driver of the vehicle to fail to stop the vehicle before traversing such grade crossing.

There is nothing in the Act that states the vehicle must remain stopped until a train passes and the signals stop flashing. The laws regarding road/rail crossings vary from one jurisdiction to another. While Nova Scotia's law is not very specific, other provincial/state laws are more detailed. In Ontario, for example, the Highway Traffic Act says it is permissable to proceed only when safe to do so and it is illegal to go under or around barriers when lowered.
Ken V. Moderator: Most things Canadian.
Any time could be train time!

by NS VIA FAN
Thu Oct 21, 2010 5:52 pm
Thanks for posting Tim, nice shots. Just wondering if this might have been an extra, returning empty coal hoppers from NSP in Trenton.

by timberley
Thu Oct 21, 2010 9:16 pm
I don't know for sure. There were a lot more than empty hoppers in the consist. Probably the first 15 cars were hoppers, the rest (maybe 40 cars?) were assorted boxes and tanks. I hadn't heard any train through earlier in the day, so I assumed 306 was just running really late. I think this was the case, because I heard a train running back the other way around 1:30 in the morning, which I assumed was the 305 heading back. But I really don't know much about the scheduling here, so I can't say much for sure.

by timberley
Mon Oct 25, 2010 6:01 pm
I was down at the Antigonish landing today, working on a behavioural survey of black ducks, when I caught CBNS 305 running along side the estuary on its way into Antigonish. 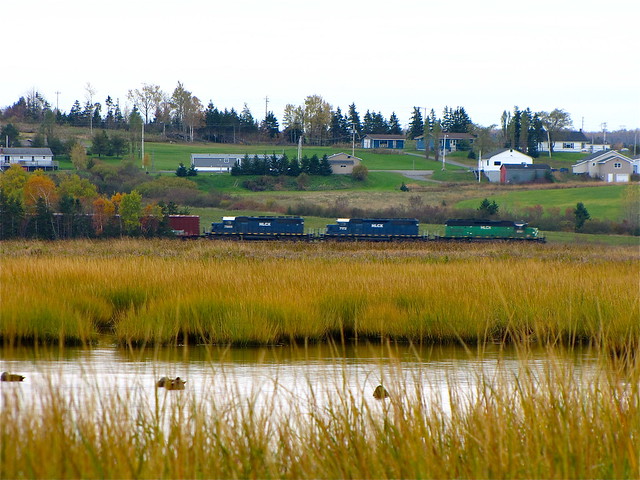 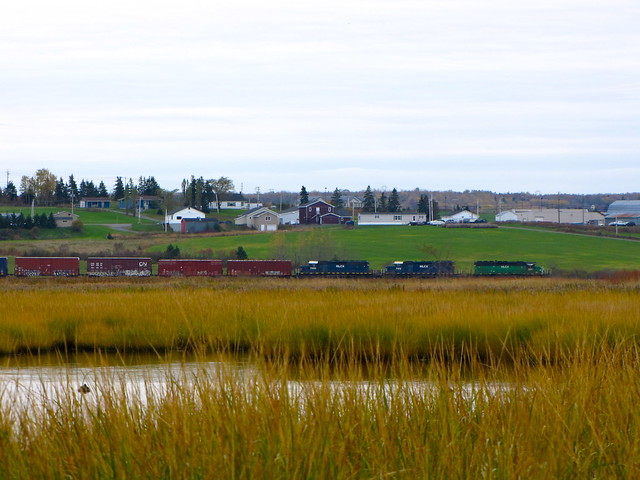 by NS VIA FAN
Thu Apr 20, 2017 6:25 am
A quiet Good Friday in the yard at Stellarton, NS. This is the power that serves Michelin Tire at Granton NS and Northern Pulp at Abercrombie Point.
You do not have the required permissions to view the files attached to this post.

by NS VIA FAN
Sat Jul 08, 2017 12:40 pm
Along the all but abandoned 100 mile section of Sydney Subdivision east of St. Peters Jct on Cape Breton Island. It's been two years since a train has passed.
You do not have the required permissions to view the files attached to this post.

by NS VIA FAN
Sat Jul 08, 2017 12:42 pm
The old Intercolonial Station at Orangedale
You do not have the required permissions to view the files attached to this post.

by bdawe
Wed Sep 06, 2017 5:12 pm
I managed to pass a CB&CNS train on the highway outside Antigonish while I was travelling through the Maritimes for a wedding last week
You do not have the required permissions to view the files attached to this post.
B. Dawe's map of routes and urban populations https://brendandawe.carto.com/viz/80b9d ... /embed_map" onclick="window.open(this.href);return false; NOW updated with 2016 Canadian Populations

bdawe wrote:I managed to pass a CB&CNS train on the highway outside Antigonish while I was travelling through the Maritimes for a wedding last week

Yes, the gorge at Marshy Hope and one of the more scenic areas along the CB&CNS especially in the fall. Here’s a shot taken there when there was still passenger service between Sydney & Truro.
You do not have the required permissions to view the files attached to this post.

by Jeff Smith
Mon May 14, 2018 1:03 pm
Trying to save rails from Abandonment: CapeBretonPost.com


Cape Breton railway society ‘working behind the scenes’
St. Peter’s Junction to Sydney line has had no rail traffic since late 2015

With the provincial government propping up the Cape Breton and Central Nova Scotia railway line from St. Peter’s Junction to Sydney, a local community group says it’s been working quietly behind the scenes to find commercial train traffic for the line that’s remained silent since late 2015.

The province renewed its operating subsidy to a maximum of $60,000 a month in March for the next year to short line railway owner Genesee & Wyoming in order to keep the company from abandoning the line and ripping up the tracks.

One possibility is the construction of a rail spur from the Donkin mine connecting to Nova Scotia Power’s rail line at Victoria Junction as an alternative to transporting coal by truck.
...