"Canadian Pacific Kansas City" doesn't exactly roll off the tongue - how about "Pan American Railway"? This name might be available for use within 2021 - and it certainly seems appropriate for the geography covered by the CPKC!

by F74265A
Sun Mar 21, 2021 9:17 am
Either PAR or PAS would be appropriate.
Cpkc does seem awkward. CN stayed CN after buying IC.
Will be curious to see how much focus remains on Saint John and searsport with corporate energy clearly focused on this huge project

This is big news and I'm still collecting all my thoughts about it. Times they are a-changing!
Barbecuing in Chessie's backyard. Host of "Shortline's Rail News & Comment."


Canadian Pacific Railway Ltd on Sunday said it has agreed to buy Kansas City Southern for $25 billion in a cash-and-shares deal to create the first rail network connecting the United States, Mexico, and Canada, betting on a pick-up in North American trade.

Shareholders of Kansas City Southern will receive 0.489 of a Canadian Pacific share and $90 in cash for each KCS common share held, the companies said in a joint statement. The deal, which has an enterprise value of $29 billion including debt, values Kansas City Southern at $275 per share, representing a 23% premium to Friday's closing price of $224.16.

by John_Perkowski
Sun Mar 21, 2021 9:40 am
When we demote this from global status, it will go in the CP Forum, linked to KCS Forum.
~John Perkowski: Moderator: General Discussion: Locomotives, Rolling Stock, and Equipment
Assistant Administrator: Railroad.net/forums
Jeff Smith & Greg Primrose now own railroad.net! 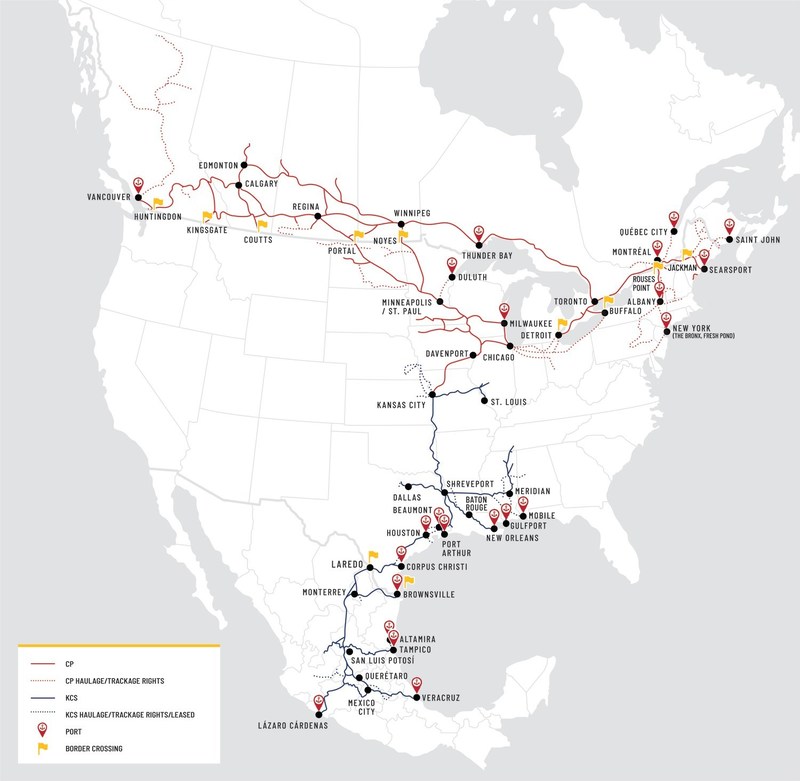 by CN9634
Sun Mar 21, 2021 10:04 am
I think this was a “crime of passion” as KCS had been shopped a bit within the equity / investment fund groups as of recent so the opportunity was now or never. CP is smart to execute as if KCS were folded into private equity you’d not soon see it around. This corrects a 23-year competitive disadvantage to CN and unlocks a lot of strong opportunities in the energy, autos and intermodal space. I think this will work well and honestly, the fear of triggering mega mergers I don’t believe will be sparked here. You combine the two smallest and capstone the story of two major east, two major west and two major Canadian with similar route structures. Also being end-to-end really makes it a seamless addition.

With this, CPKC will be able to lock up MX intermodal from CN with SNI and HJBI, HUBU probably able to get those guys to switch over generally on some core domestic lanes. Take for example Whirlpool, produces washing machines down in Monterrey. You’ll be able to provide an intermodal product able to strike major metros in the Northeast and Midwest seamlessly on a single carrier. That just scratches the surface, think autos and much more.

Personally being in Maine, our world was pretty small only 2 years ago... now we’re right in the middle of a likely to be extremely important Eastern artery. What exciting times.

by Shortline614
Sun Mar 21, 2021 10:27 am
I think this has a good chance of getting though the STB. Reminder that KCS is the only Class I railroad exempt from the strict merger rules that the STB put in place after the aborted CN-BNSF merger. This being an entirely end-to-end merger also means it has a good chance of getting though. No employee to lay off, no routes to consolidate. The big thing to look out for is how the shippers react to this. Reminder that shipper opposition is what tanked CN-BNSF and CP-NS.

I'd imagine the ex-MILW line to Kansas City is going to get some serious upgrades to handle merger related traffic. Right now it's just a glorified branch line from what I can tell.

Trains Mag is also reporting that Keith Creel's contract is beinf extended though 2026: https://www.trains.com/trn/news-reviews ... into-2026/

Seems like this has been in the works for a while. They kept it quite well hidden considering that we only found out about it late last night. I also wonder to what degree the acquisition of the CMQ was a "test run" for this merger. Should all be said and done in mid to late 2022.
Barbecuing in Chessie's backyard. Host of "Shortline's Rail News & Comment."

Little "hotter news" than CSX-PAR appeared to be.

by urr304
Sun Mar 21, 2021 1:01 pm
As I related elsewhere, a now departed friend and I discussed the possiblity of CP taking on KCS in 1990s; this was prior to KCS de Mexico. Since that KCS has had even greater potential. There will probably arrangements for the other systems for access which all will depend on what the Mexicans will want. Now CP will need three languages on their equipment.