by dgvrengineer
Sun Nov 01, 2020 7:45 pm
This is not good news. Looks like there will be a serious delay. Basically, they couldn't sell the bonds so they are postponing everything. They will have to go back to California at a later date for permission to sell bonds again. The current deadline in California is Dec 1.
https://trn.trains.com/news/news-wire/2 ... sell-bonds

by mtuandrew
Sun Nov 01, 2020 8:45 pm
Simplest solution would just be to have the state or Feds buy the remaining unsold bonds. Worst case, the government gets a railroad they probably would have needed to build anyway; best case, the American taxpayer gets a few hundredths of a penny back.
Moderator: General Discussion: Passenger Rail,
DC-MD-VA Passenger Rail and Amtrak

by Gilbert B Norman
Sun Nov 01, 2020 9:32 pm
There is far greater insight within this Bloomberg article than within that referenced within the TRAINS Newswire piece noted by Mr. DVG Engineer.

The fact remains that Brightline (FL) simply "wasn't making numbers", and who knows what's ahead for it post-COVID.

Gilbert B Norman wrote: ↑Sun Nov 01, 2020 9:32 pm The fact remains that Brightline (FL) simply "wasn't making numbers", and who knows what's ahead for it post-COVID.

This is due to the fact of Brightline, as of pre-COVID, only ran between West Palm Beach and Miami, basically the same corridor as the existing Tri-Rail but on a parallel line and with fewer stations. Not to mention, it only ran between West Palm Beach and Ft. Lauderdale for a few months. Brightline likely didn't ¨make the numbers¨ since it runs parallel to a well-known existing commuter route, and did not open its extension to Orlando, DIsney World or Tampa yet. Once it goes beyond the region which Tri-Rail serves, then it will have greater traveling opportunities for customers and will significantly increase ridership. ALso keep in mind that while Brightline is shut down, they´re still working on their Orlando extension, expected to be completed by late 2021 or 2022, and (up until yesterday) are planning to serve the most sought after corridors which currently has no passenger service. Once these routes are open, Brightline will be able to serve two large regions and have high ridership. Basic economics.
"Look down, step over, and watch the gap!" - Dr. John Clarke, The Gap Rap (2010)

Pensyfan19 wrote: ↑Mon Nov 02, 2020 7:49 am Once these routes are open, Brightline will be able to serve two large regions and have high ridership. Basic economics.

Duly noted Mr. Pennsy. It never had a chance pre-COVID, and as you note, through this "condition", construction continues.

But I think potential investors in the "Angels-Meadows" venture want to see those numbers before "stepping up to the Tables".

Right now, there's not a lot of evidence that MIA-ORL will be an overnight success, although I suspect it might be popular with cruise passengers wanting to go visit the Mouse more than it will be locals.

Problem is that the Mouse isn't open for tourism in any meaningful way right now, and who knows what the future looks like for big theme parks... COVID won't be the last super-virus we see in our lifetime.

by lensovet
Tue Nov 03, 2020 4:41 am
Note that "the numbers it wasn't making" were their own numbers. That they estimated for that "redundant" segment, not some future hypothetical network. It's those numbers, both in terms of ridership and revenue per passenger, that they failed to meet.

Edit: just noticed that the Bloomberg article referenced above is from August. This one is more current, and it looks like California is not giving them any more extensions.
Paul Borokhov

Not sure there's much new here, but here it is anyway:


The California Department of Transportation announced a proposal to assist XpressWest in the development of an electric high-speed passenger rail system from Apple Valley to Rancho Cucamonga that would run primarily along Interstate 15.

The proposal for The Cajon Pass segment was announced on Monday, March 29 marking the start of a 15 day Notice of Intent period for the public.

This project will serve as the second segment of the Brightline West high-speed passenger rail system that will initially connect Apple Valley to Las Vegas over 170 miles of track, with 135 miles in California.
...
The Cajon Pass segment will add 50 miles to this alignment primarily within the existing I-15 corridor right of way protected by a median barrier, ending with a station constructed adjacent to or connected to the Rancho Cucamonga Metrolink train station.
... 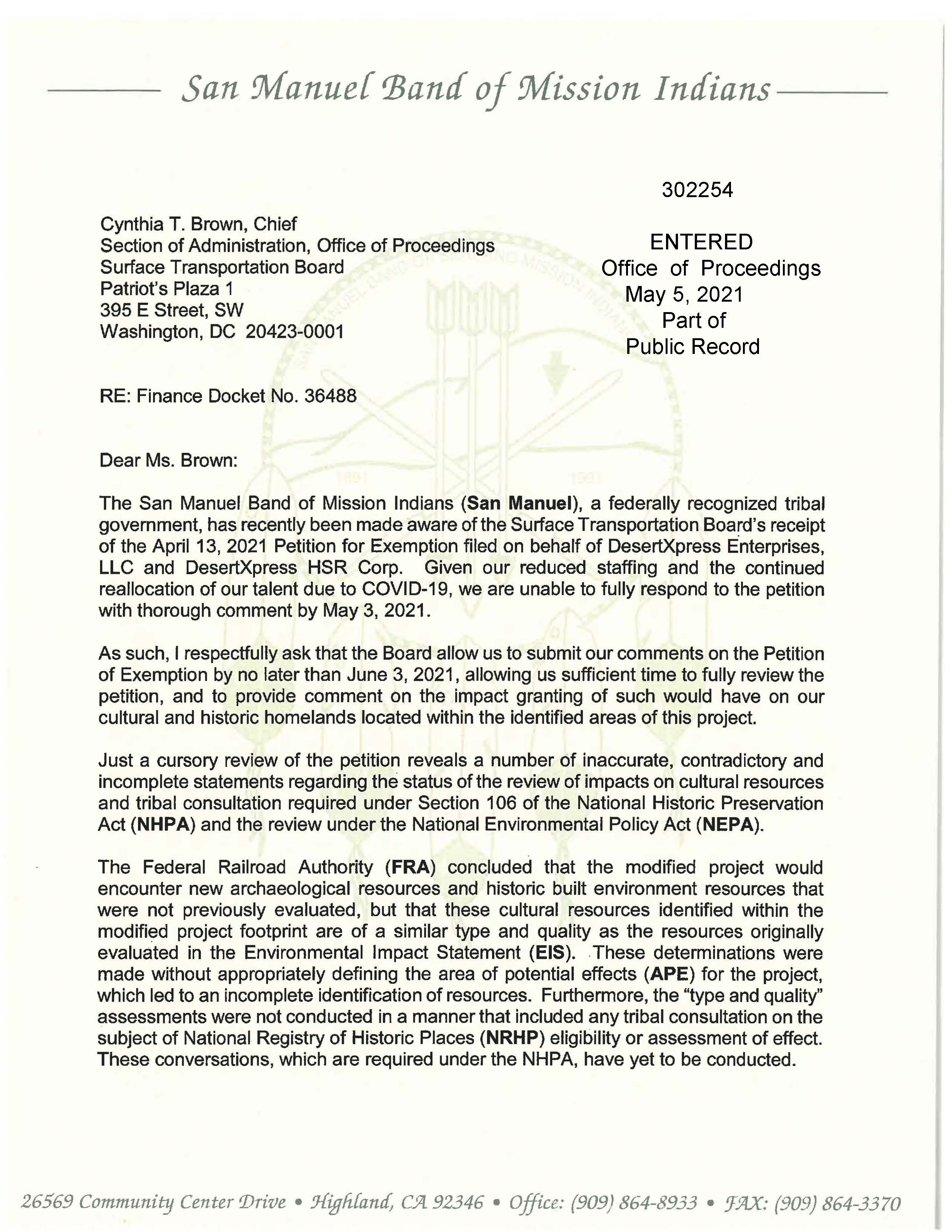 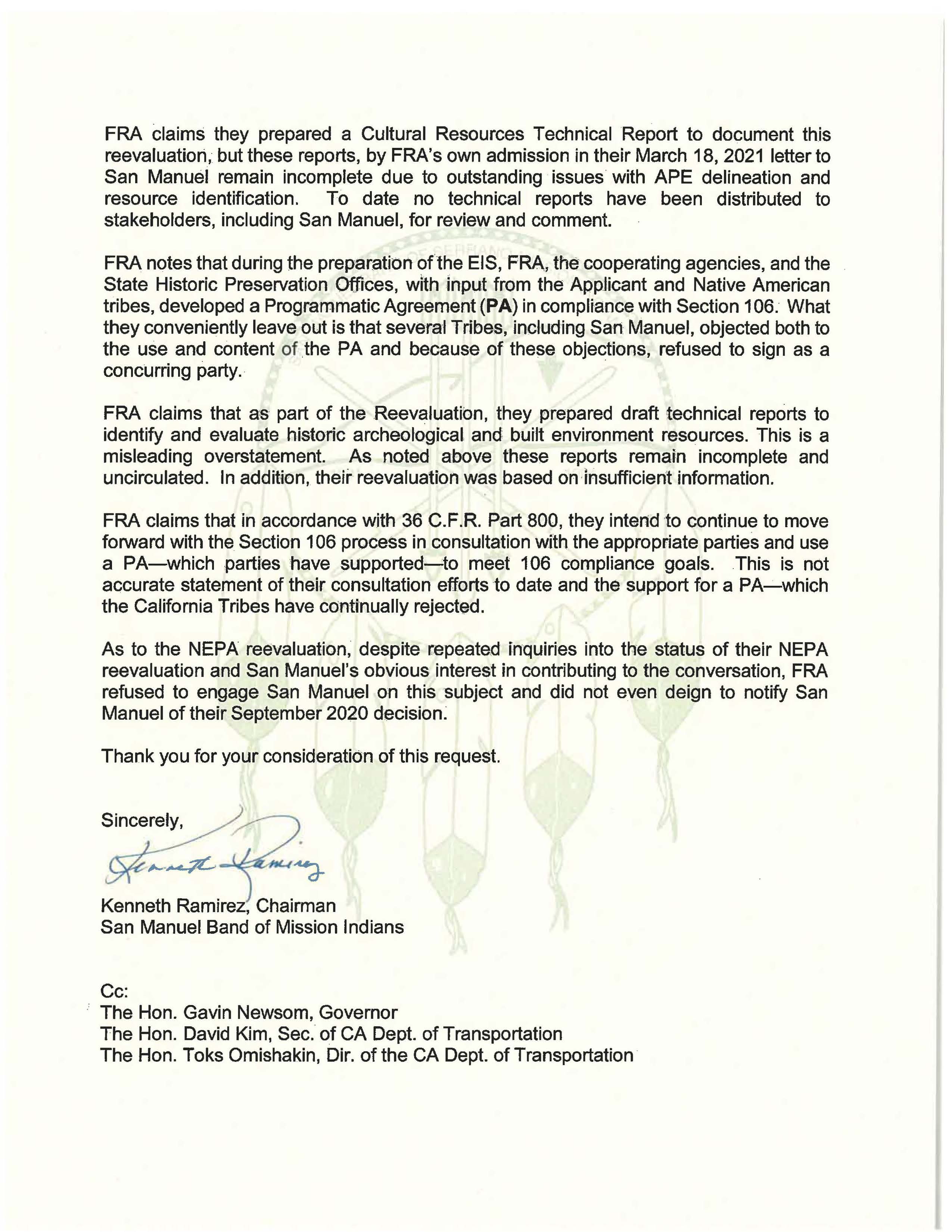 by Arlington
Tue May 11, 2021 8:28 am
I'm sorry, but I don't see the San Manuel Band of Mission Indians (SMBMI) as doing anything there other than a late and thinly-veiled casino maneuver, which I'd paraphrase as:

It's bad for our San Manuel Casino in Highland CA (15 min west of downtown San Bernadino)
if getting to Vegas gets faster and easier from LA and San Bernadino counties,
which it would if it the train comes over the Cahon Pass on existing track
and ties into existing transit via Rancho Cucamonga and LAUS

That's basically all that's new since the final FEIS was filed by XpressWest in 2011.
"Trying to solve congestion by making roadways wider is like trying to solve obesity by buying bigger pants."--Charles Marohn

by gokeefe
Wed May 12, 2021 6:16 pm
That letter appears sufficient to bring this project to a dead halt. I realize the tribe is probably trying to protect their own economic interests but this is a dispute about the EIS. If what the tribe says is true (which it might not be) the FRA better hope and pray they have sufficient documentation of all conversations.

Of course, should this project be buried, that land is quite marketable.

by HenryAlan
Wed Jul 07, 2021 8:30 am
I guess Brightline is betting on the city growing southward, but that location is pretty far from most of the action. Even the airport is closer to the heart of the strip than this. One of the selling points of rail is usually that you deboard and are immediately in the heart of the city. This ain't that.