(AUS) Along the Pakenham Line

(AUS) Along the Pakenham Line

by Pakenhamtrain
Wed Nov 04, 2020 3:43 am
G'day all. With lockdown being lifted somewhat I finally had the chance to head out and get a few photos. We still have a 25km distance restriction in place which means I had to stick to my own train line. 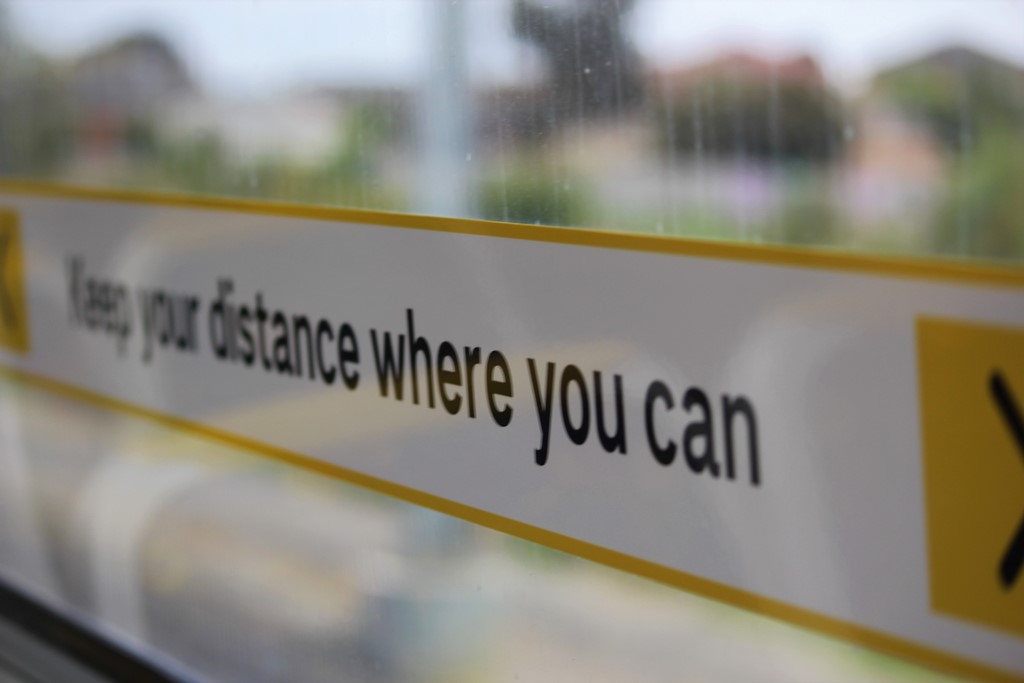 We begin with a sign of the times. Just about every train has one of these plastered on the windows. 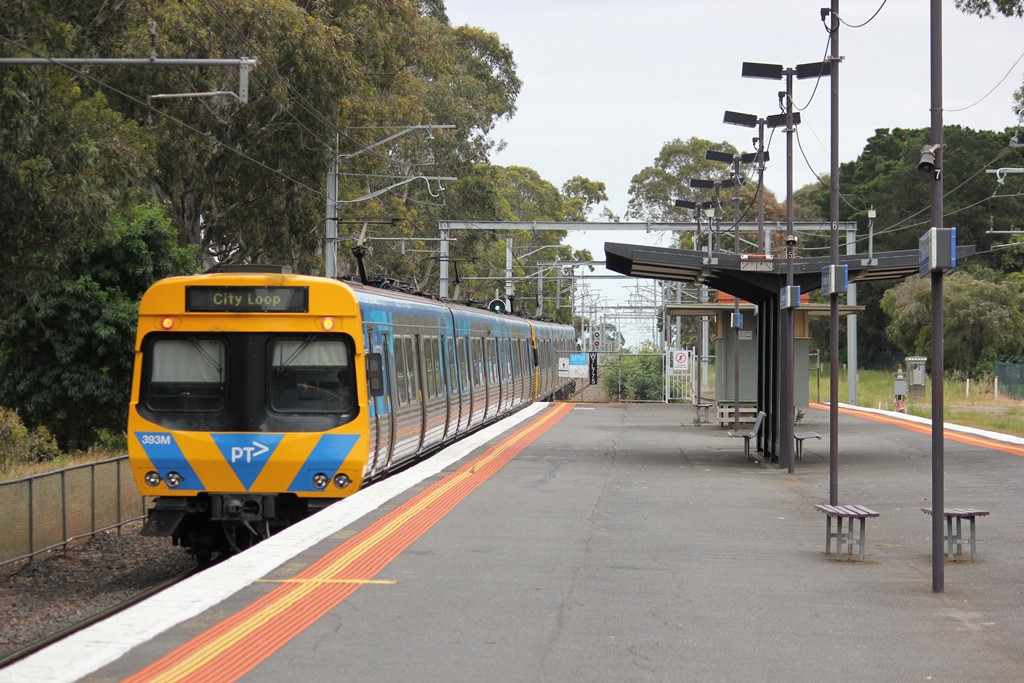 EDI refurb Comeng 393M trails a City Loop train on the up at Sandown Park. Set 393M-T-394M has the notoriety of running away from Broadmeadows before crashing into N463 at Spencer Street in 2003. You can see the join where they repaired 394M. 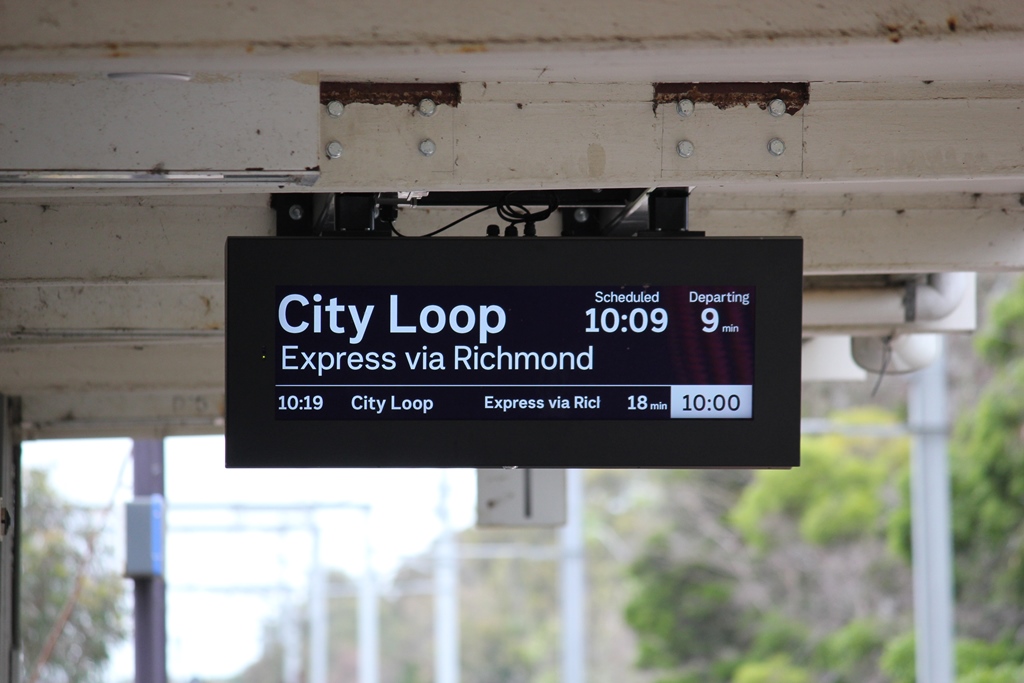 Being fitted to many stations are new LCD passenger displays. In this case displaying the next 2 trains. "Express via Richmond" will change to a description of the service, in this case it scrolls "Stops all stations to Caulfield, runs express to South Yarra and then stops all stations to Flinders Street"
Saying it's going via Richmond is kind of pointless given it's the only way you can get to the city stations from this side of the rail network 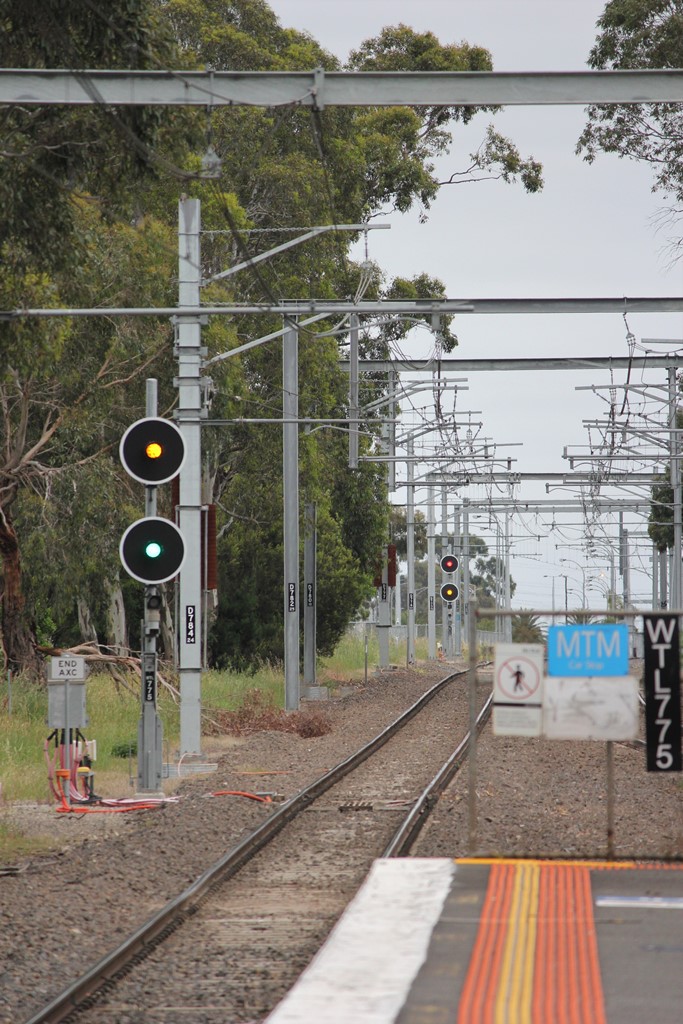 At the up end of Sandown Park trains enter the Westall signalling area with home signal WTL775 being the first signal on the up drivers see. The Westall area like most of the Pakenham/Cranbourne lines is is controlled from the Dandenong Signalling Centre.
The Westall area encompasses Westall, Westall train maintenance facility and Springvale. Here WTL775 is showing reduce to medium while the signal in advance (WTL773) is showing medium speed warning. Medium speed for Victoria is 40 km/h. It can be increased to 65 or 80 if the appropriate indicator is illuminated. 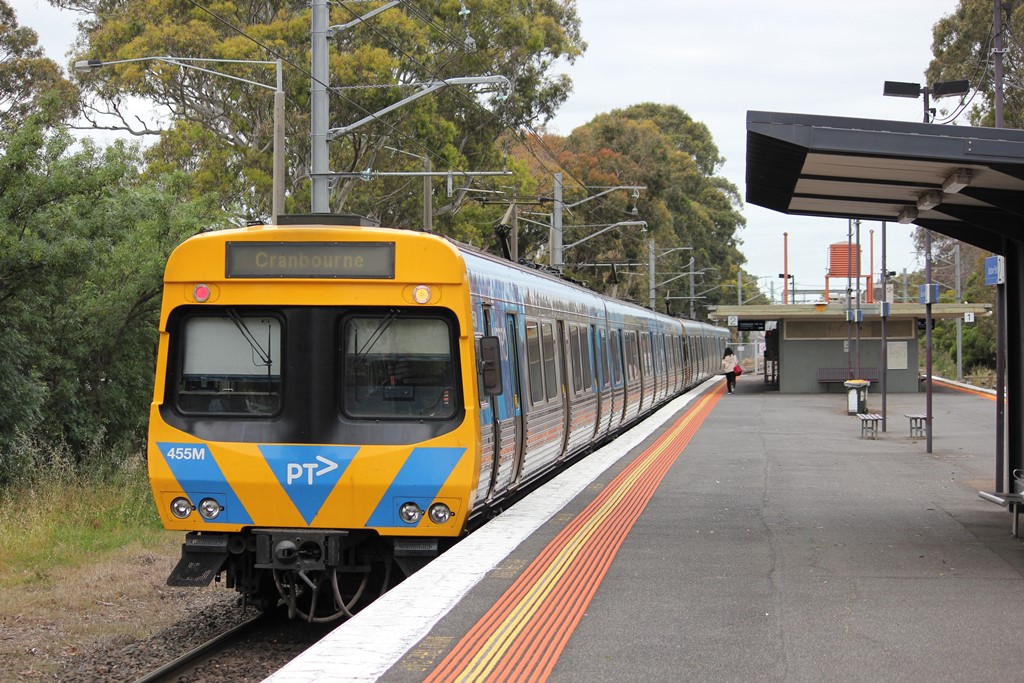 On the down EDI refurb Comeng 455M trails a Cranbourne train at Sandown Park. 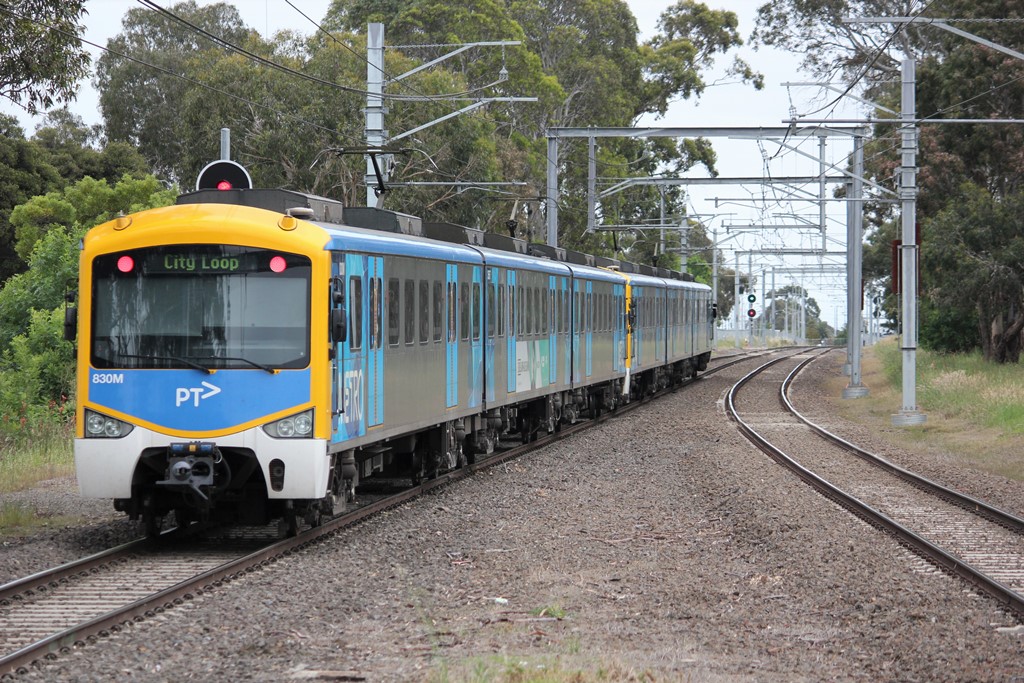 Back on the up sees Siemens 830M on the rear of a City Loop train. 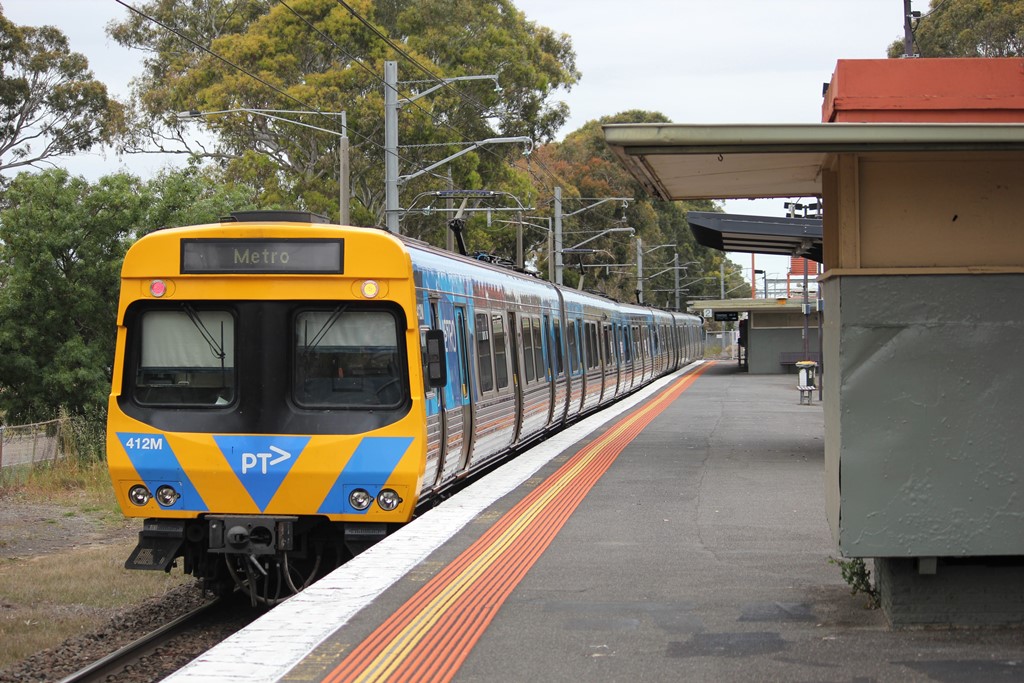 EDI refurb Comeng 412M with a down empty cars move presumably from Westall. Being still around 9:30-10am trains are still coming out of the yard to begin service. 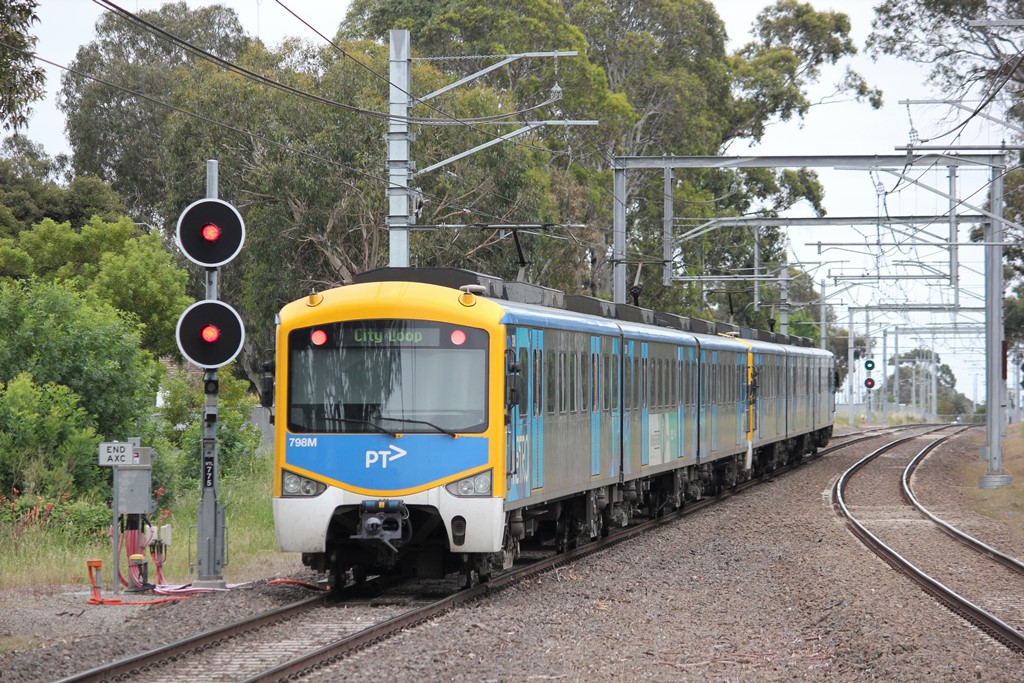 Siemens 798M on the rear on the up with a City Loop train. The END AXC sign next to WTL775 indicates the end of axle counter territory. Westall is one of the few places on the Pakenham/Cranbourne line still controlled by track circuits. 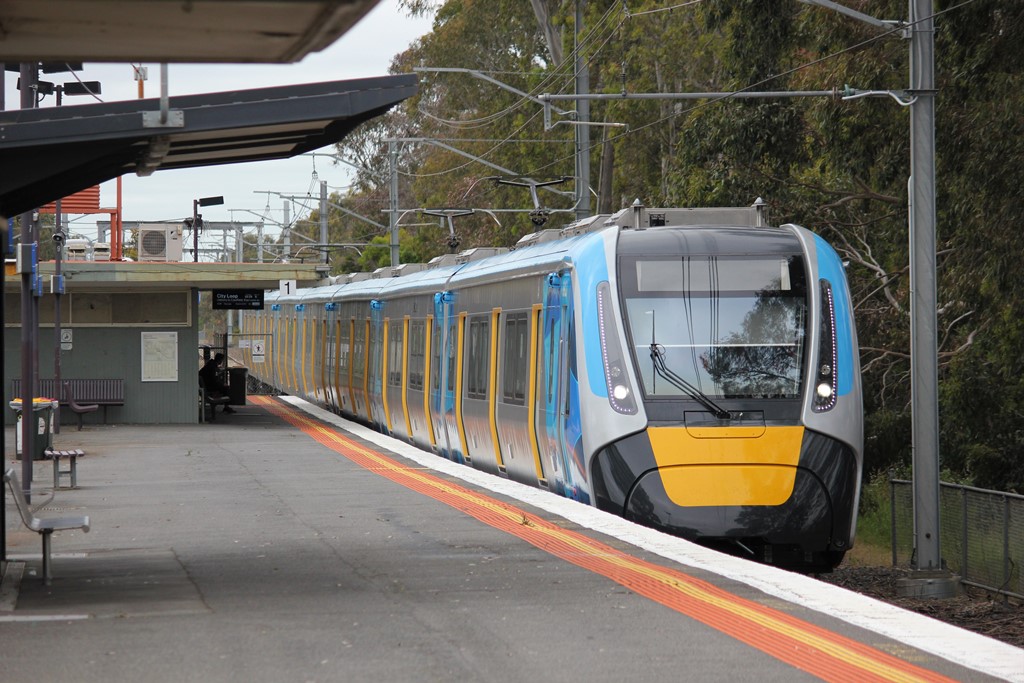 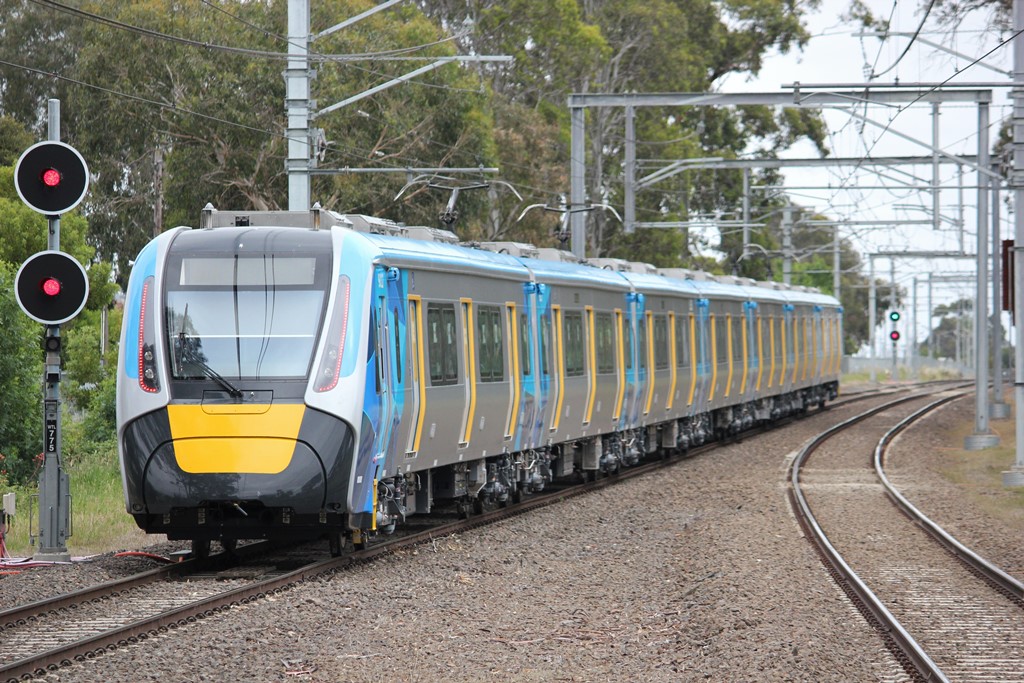 During the lockdown Melbourne's new High Capacity Metro Trains moved from overnight testing to being allowed to co mingle other trains and began Reliability Grown Running.
Here HCMT unit 17 with car 9917 in the lead runs through Sandown Park with a test run to Werribee. Unit 17 is one of the few with the full livery applied.
The HCMTs fleet will be eventually comprised as 65 10 car trains. In the intern they are being delivered as 7 car trains until the Metro Tunnel opens in 2025. 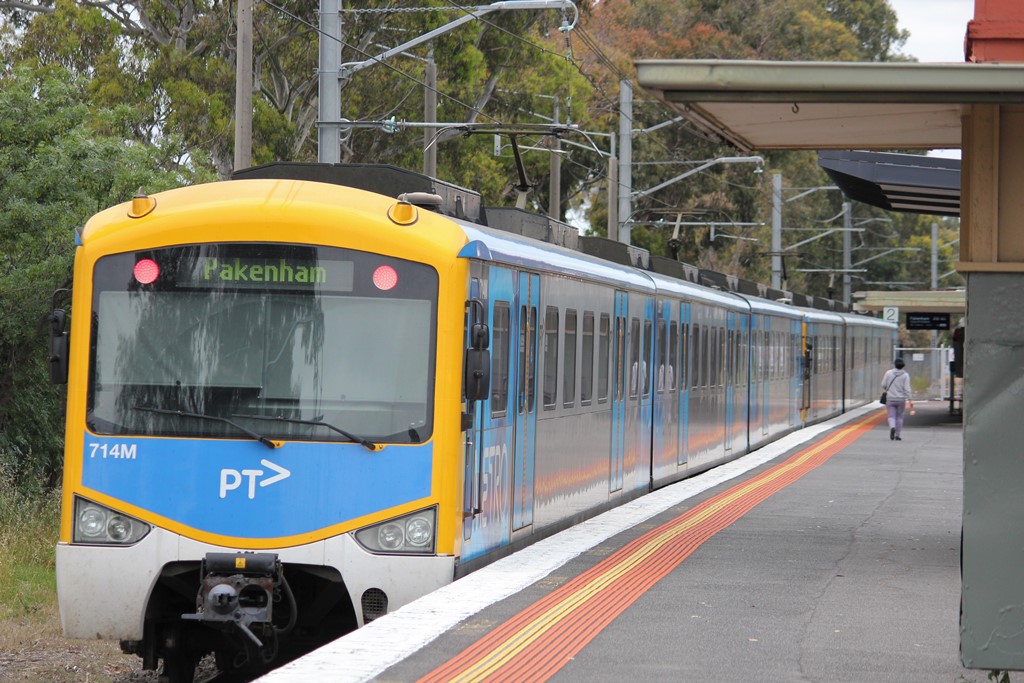 Siemens 714M on the down with a Pakenham train. 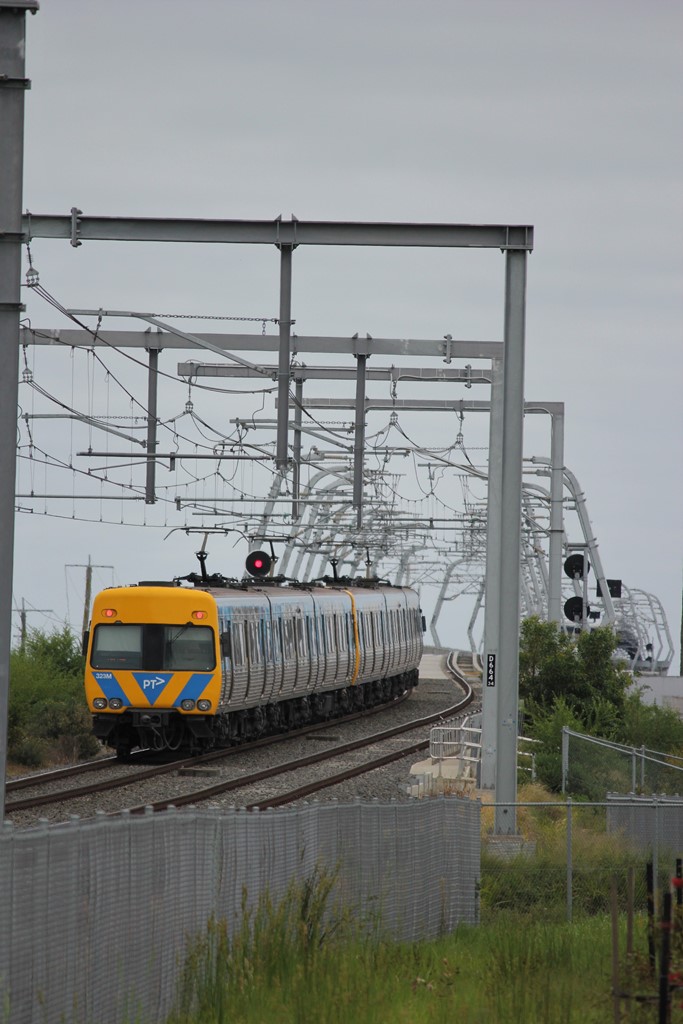 We are now on the up side of Westall and Alstom refurb 323M is on rear of a City Loop train as is powers up the embankment onto the skyrail towards Clayton. 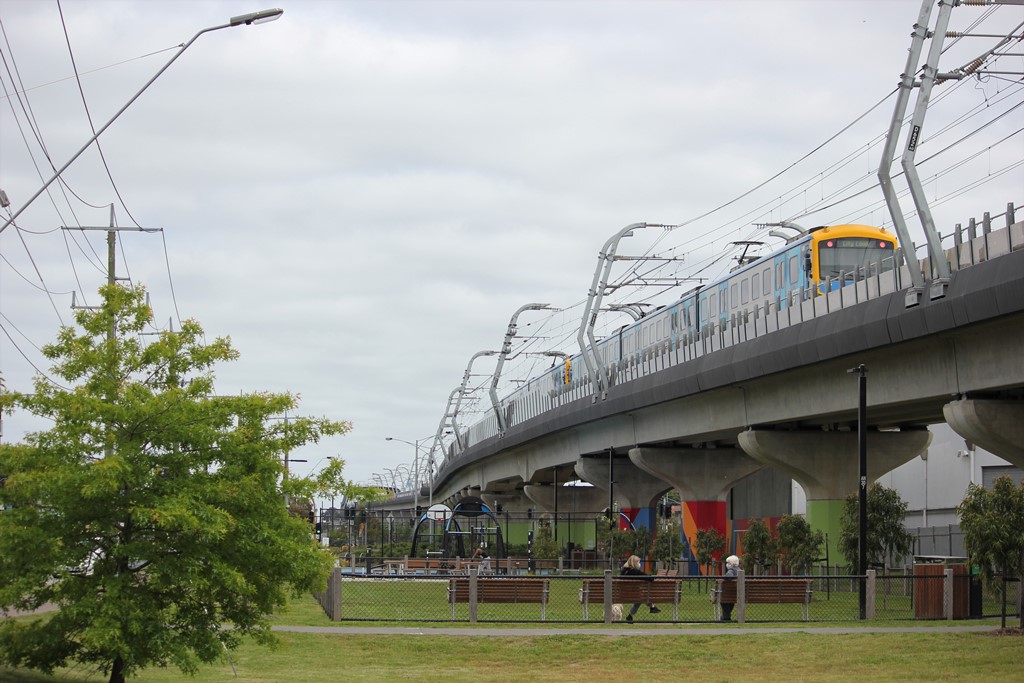 In the last few years the Victorian Government has embarked on a program to remove level crossings in the suburban area. One area of work was the 9 remaining level crossings between Caulfield and Dandenong. Each of these crossings were replaced with a rail viaduct over them.
One of the benefits of the elevated rail line is the land where the tracks once rain has been opened up and turned into park lands and playgrounds. Here an up Siemens slowing down for a station stop at Clayton train passes over Centre Road. 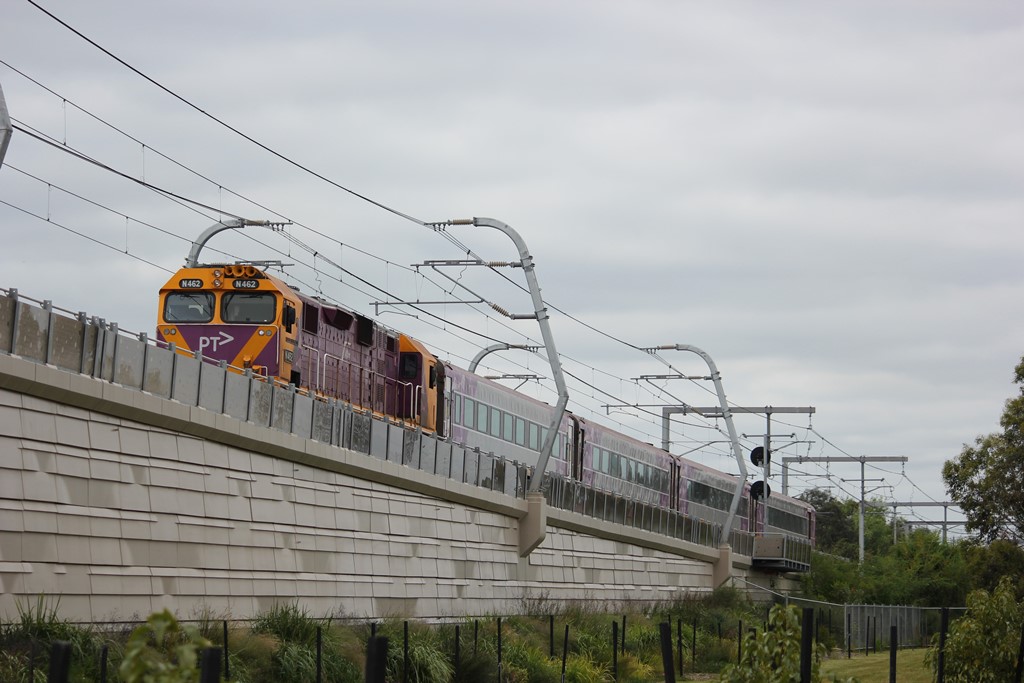 Not too far behind is is V/Line's N462 with car set FN4 with the up Bairnsdale. 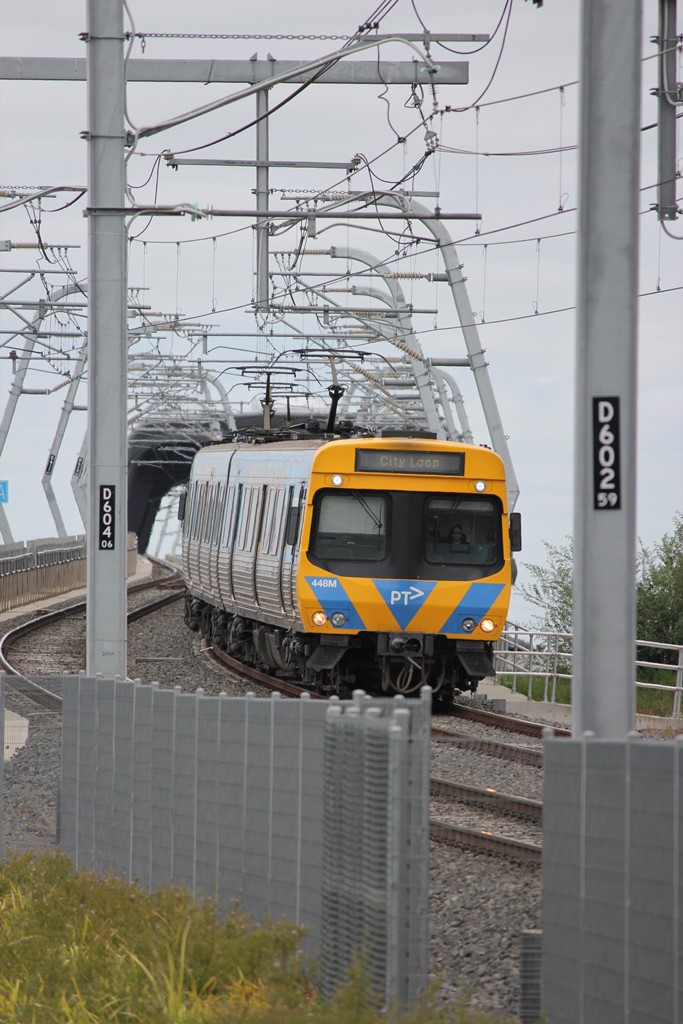 We are now on the up side of Clayton where EDI refurb Comeng where 448M powers out of Clayton station and off this section of the elevated rail with a City Loop train. 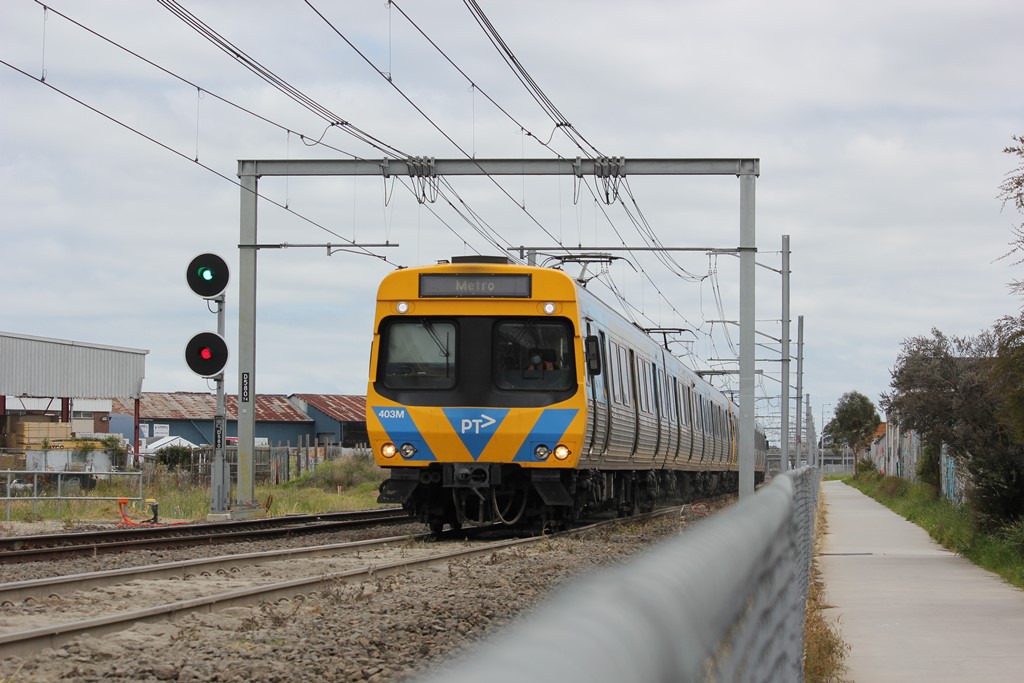 EDI refurb Comeng 403M on the down between Clayton and Huntingdale. The signal next to the train is typical of many now between Dandenong and Caulfield. While automatic they're dressed as home signals with automatic number plates. For the driver it means they must treat is as a home signal under the rule book. This was done in preparation for the CBTC that will be installed on the line in the future. 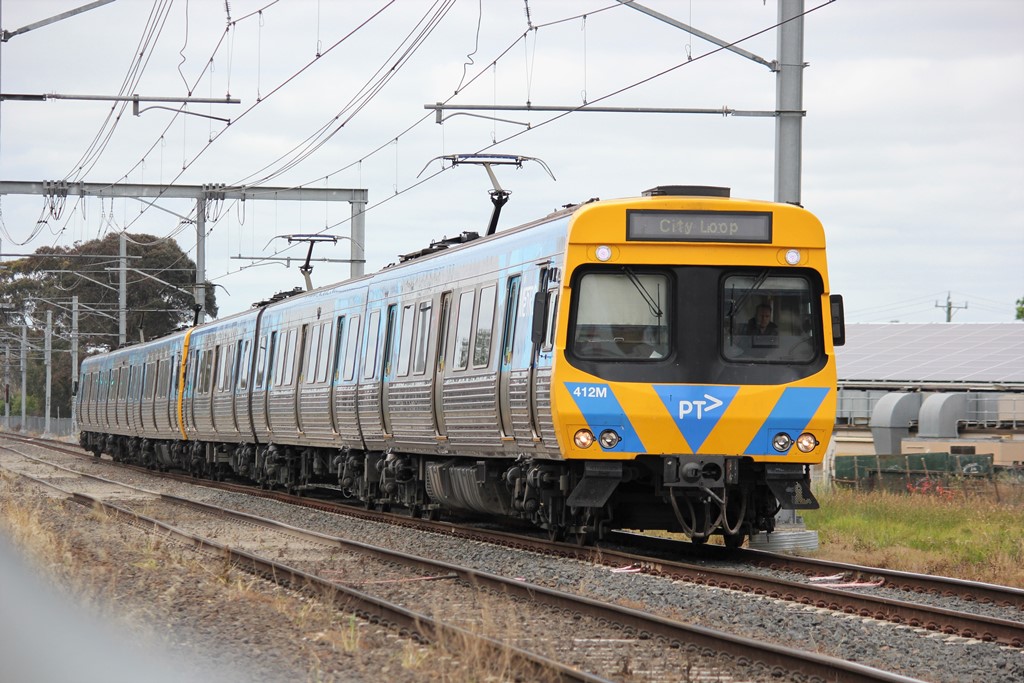 EDI refurb Comeng 412M has now begun it's day in service on the up between Clayton and Huntingdale with a City Loop train. 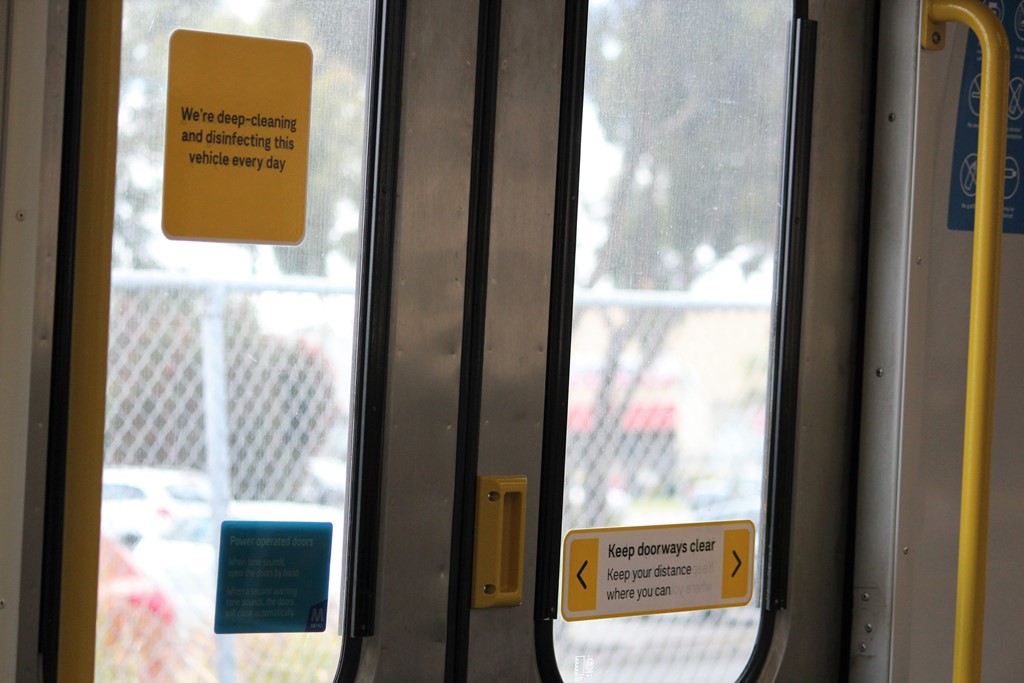 Again we have more signs of the times on the doors of a Comeng with a "We're deep-cleaning and disinfecting this vehicle" and "Keep doorways clear, Keep your distance where you can"
The deep cleaning sticker is kind of funny given during the week it was revealed at a IBAC hearing that the cleaners were not doing the job correctly. 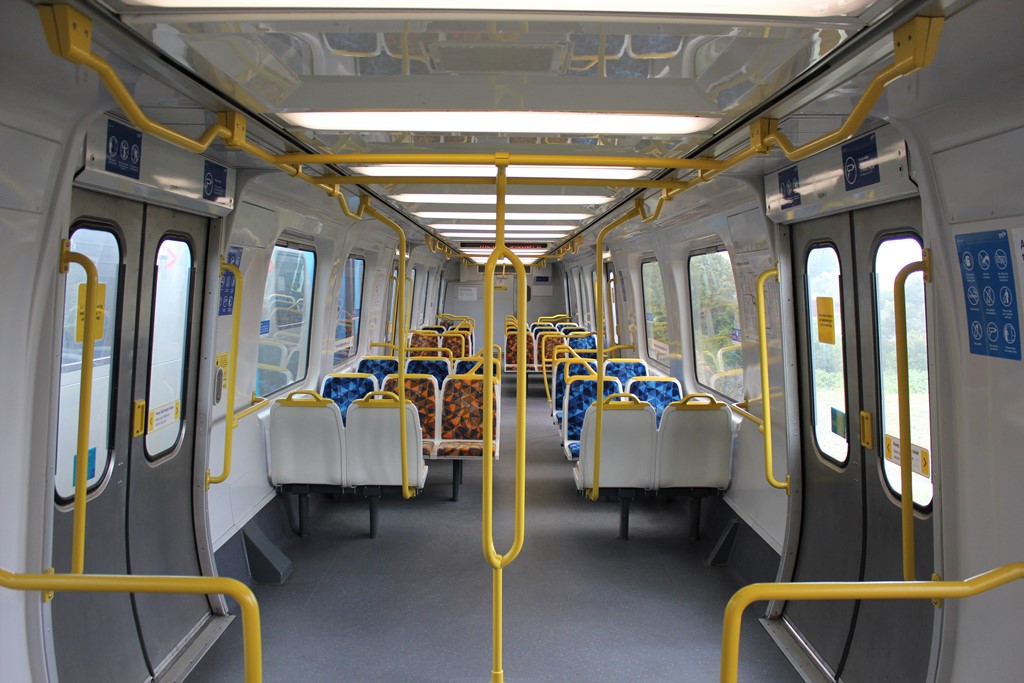 On board EDI refurb Comeng 456M showing the various works inside the train. These include new handrails, handholds and new seat fabric. 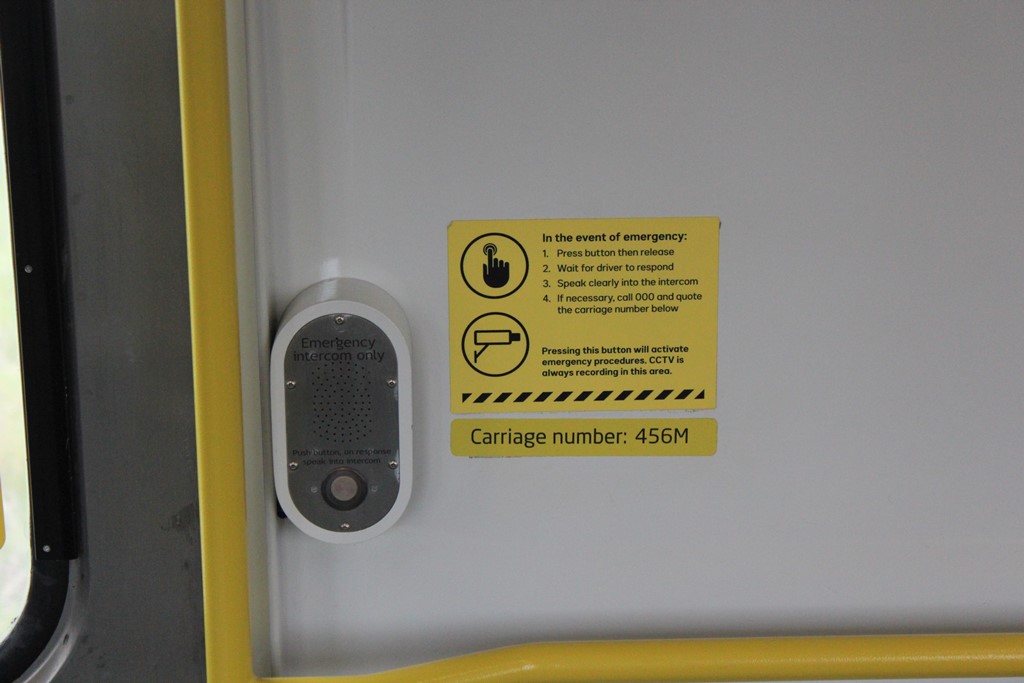 One of three Passenger Emergency Intercoms in each carriage. Amazingly people get these buttons confused with a door open button. The Comeng fleet has doors you open by hand. 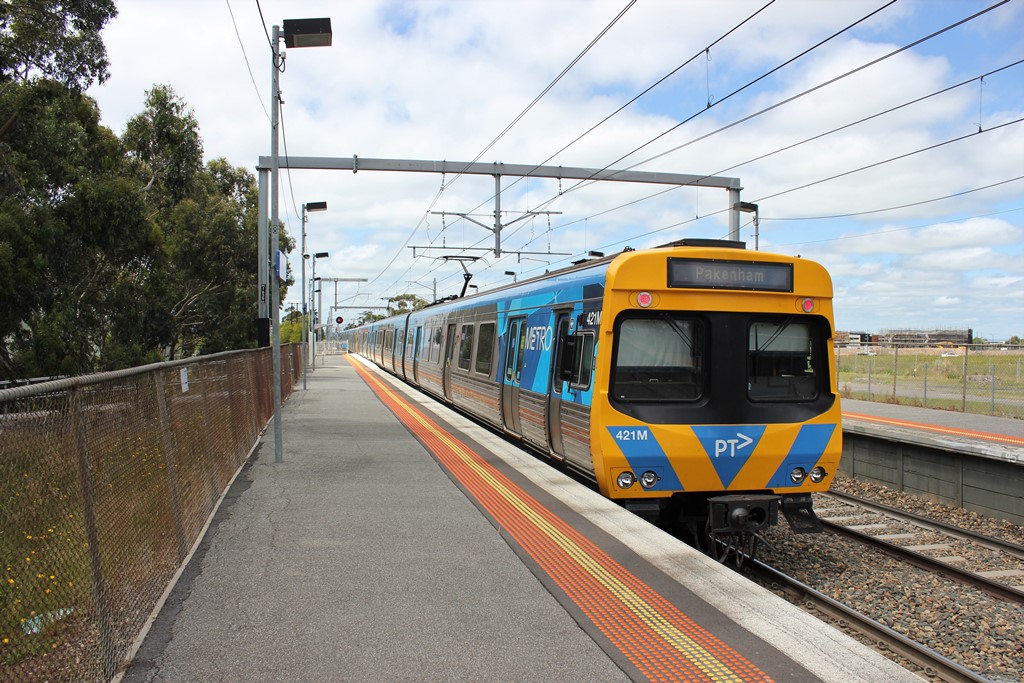 Now we head back towards Pakenham with EDI refurb Comeng 421M on the rear of a Pakenham train at Officer. It might seem like a station in the middle of bugger all but suburbia and urban sprawl isn't that far away. 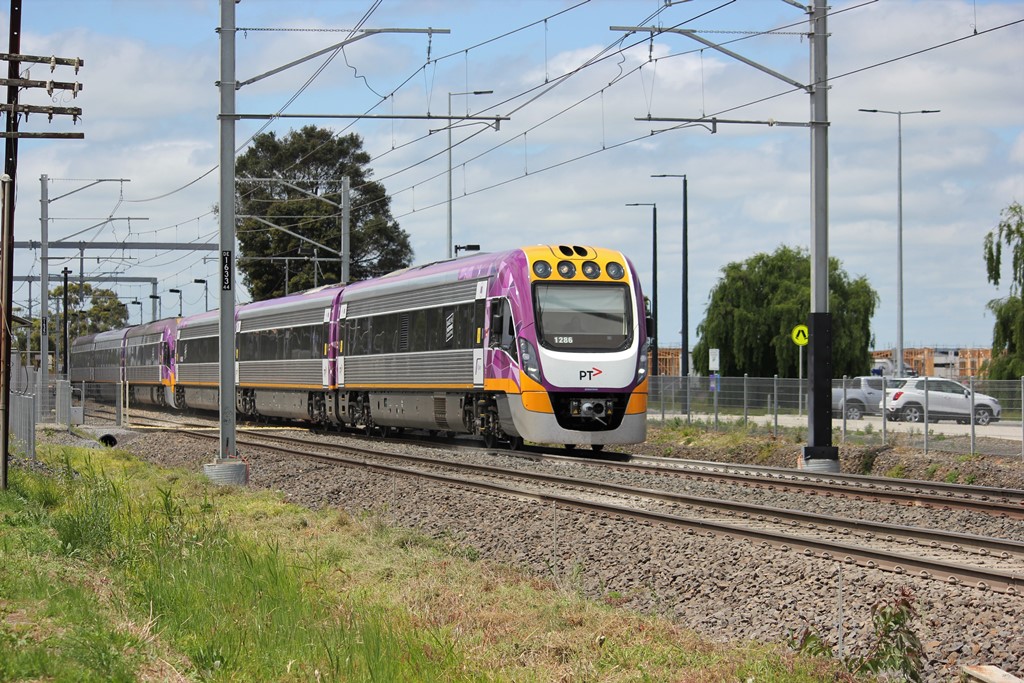 VLocity VL83 and another VLocity on the up through Officer. VL83 is one of the new units entering service with the re designed strengthened front end. Other features are the return of the toilet in the DM car, new headlights, new horns and new wipers. 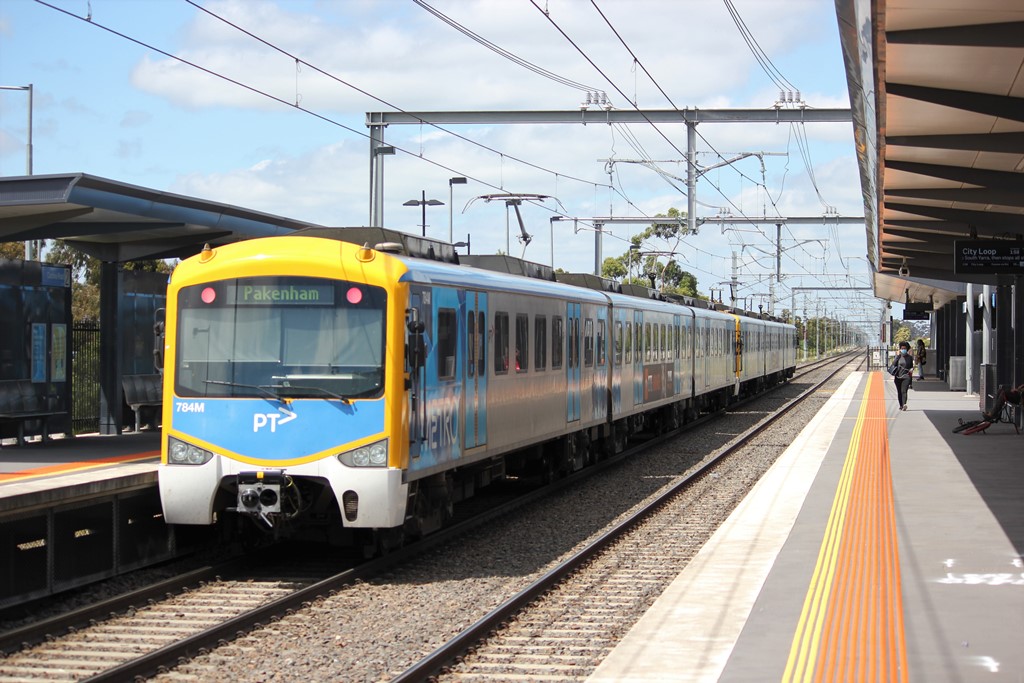 Siemens 784M departs Cardina Road on the down for the next and last stop of Pakenham.