How does building an extension of the Central Concourse (part of Penn Station proper) translate to being part of Moynihan “Station”?

That is incorrect. The Central Corridor is between the LIRR and the old West side lower level NJT exit area. You can get to it by going down the stairs by the Krispy Kreme in the middle of the upper level. It currently services track 13-20(?). It branches off of the Hilton corridor.

Ok. That's why I said "or at least rehab parts of Penn Station" to be safe. Thank you for the information.
"Look down, step over, and watch the gap!" - Dr. John Clarke, The Gap Rap (2010)

by JamesRR
Thu May 21, 2020 12:11 pm
Yeah, this is not part of Moynihan. However, according to NJT's press release, this project is being done in concert with Amtrak and the LIRR, so likely it's a part of the larger Penn Station improvements. The presser also mentioned plans to eventually have NJT take over a majority of the Upper Level on the 8 Ave side once Amtrak moves into Moynihan.


...
The state's plan to turn Penn Station into the "Empire Station Complex" would improve conditions at the Midtown transit hub, expand the station's capacity by about 40 percent and reduce congestion for the station's nearly 650,000 daily riders (before the outbreak of coronavirus). The idea was originally revealed by Cuomo in 2016 and then re-revealed in January of this year.

"We have the Empire Station project, which is building a new Penn Station, which is long overdue. That Penn Station has been torturing people for too long. Let's now accelerate the Empire, Penn project while the ridership is low and when we need the jobs," Cuomo said Tuesday.
...

Pictures from the presentation: 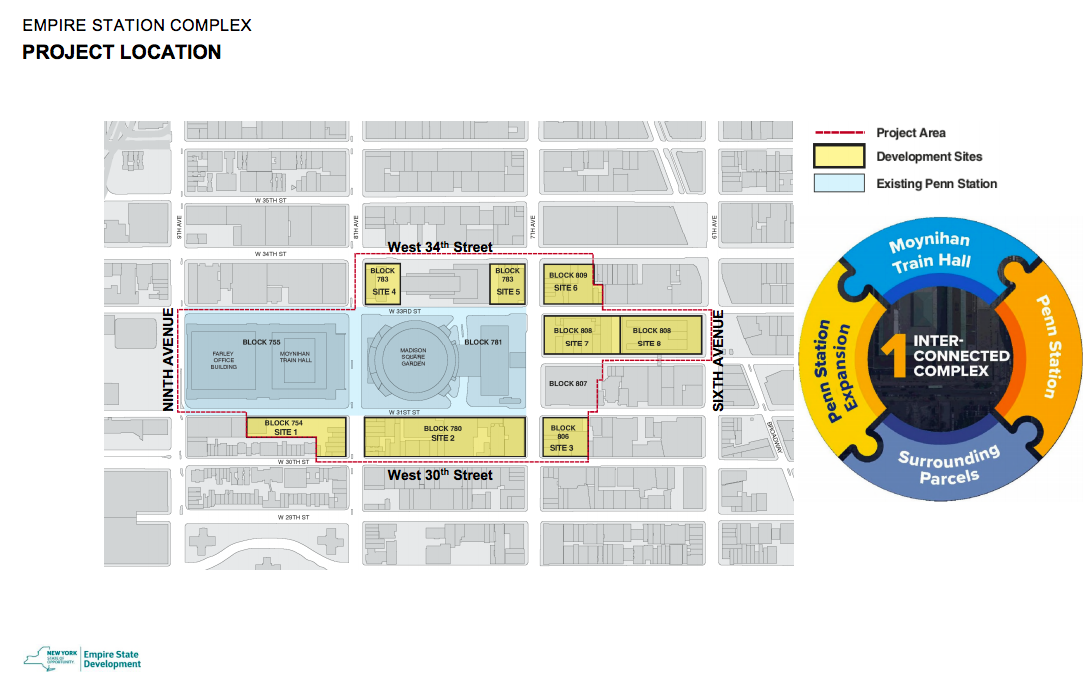 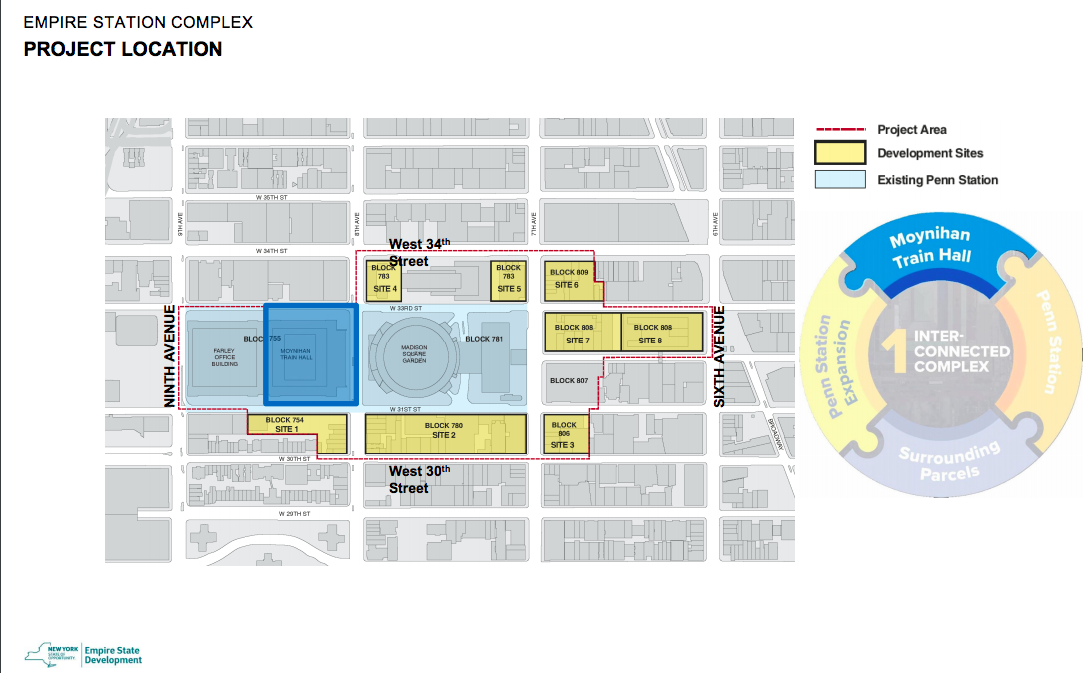 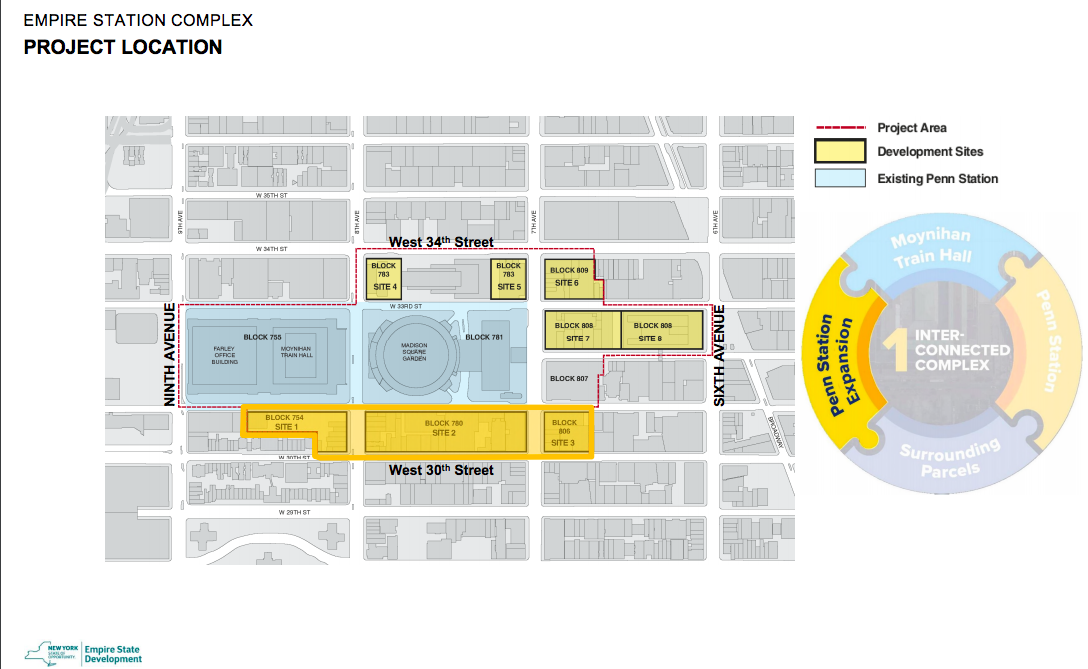 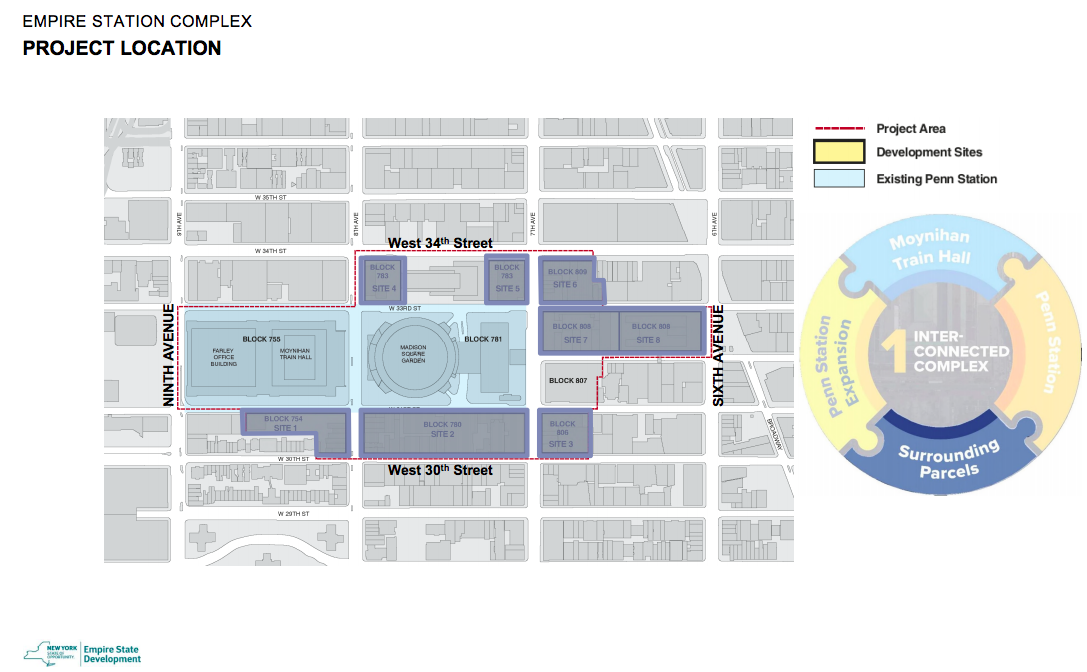 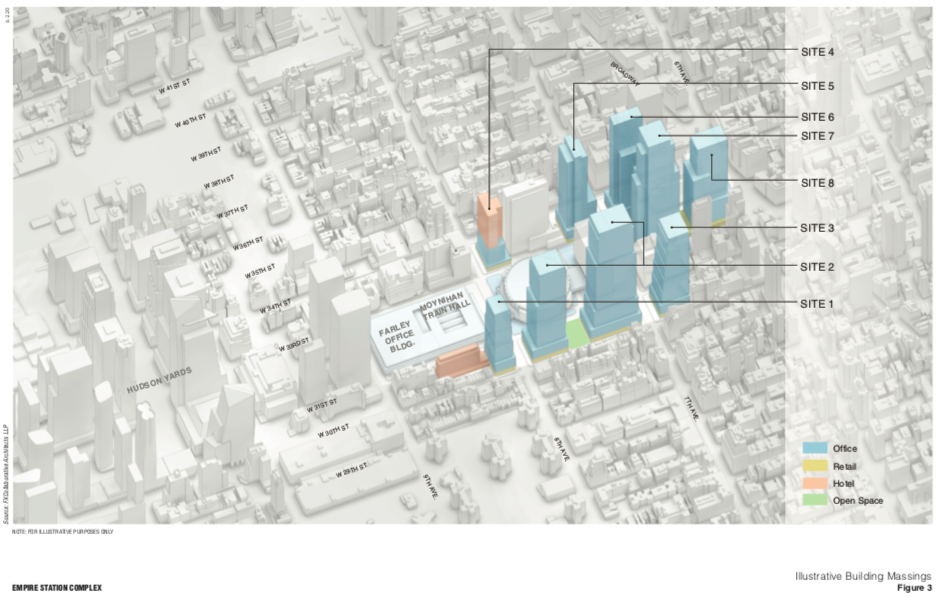 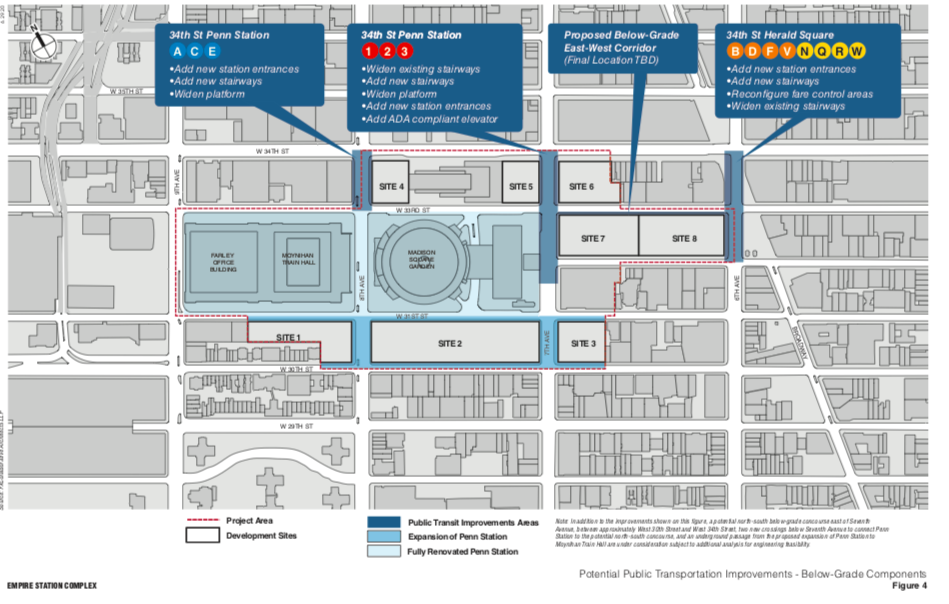 There was also an online hearing with a presentation held by ESD on July 20th, which I missed and only found out about from Twitter.

While I probably wouldn't parse it as strongly as the tweet, I have to say I'm no fan of this project either. I've never supported Penn South (ARC Alt-G diehard here) and I'm not sure what to make of the state wanting to create another big office district on the West Side right after Hudson Yards (though I suppose Hudson Yards is more mixed-use than this proposal). To say nothing of the recent East Midtown rezoning (I think I know a railroad project which could help strengthen that rezoning...)

Looks like the project also includes a proposal to renovate and reopen the old Gimbels Passageway under 33rd Street between Herald Square and Penn Station (which, for those unaware, was closed in the 1980s. Real estate company Vornado proposed to reopen the passage a decade ago as part of a proposal to replace the Hotel Pennsylvania with a new skyscraper, 15 Penn Plaza, which fell through). To my knowledge, reopening the passageway didn't come up at all during discussion of the renovations to the LIRR concourse and the under-construction new 33rd St entrance. Looks like reopening of the passageway continues to be contingent on redevelopment of the parcels above. (For what it's worth, according to the New York Post a decade ago, the MTA, Amtrak and Vornado could not all agree who owns the passageway). Unfortunate that a reopening is tied to a project like this. Cuomo is pushing it, so I have little doubt it'll move forward when/if the economy starts to recover - he probably won't be leaving office anytime soon.

On another note, it's funny to see this recently-made document refer to the V train, which was discontinued ten years ago and folded into the M line.

Edit: Usual disclaimer that this was made pre-COVID, but the draft scope of work indeed states that LIRR service to Penn will/would have decrease(d) after East Side Access opens, in case that's something that people are still thinking about. Also, comments on the draft scope of work for the project are being accepted through August 20th.

by lensovet
Thu Aug 13, 2020 3:27 am
Given the uncertainty around COVID, if the norm becomes more distanced offices, you would need more office space, not less. not everyone has the freedom or the environment to work at home productively.
Paul Borokhov

And even if they do, "read all about" the effect upon any mode of mass transit:


.There’s a special place in hell for the authors of those trend stories that concern New Yorkers discovering things for the first time as though they are new.

This is absolutely one of those trends, and its author, one of its subjects.

Why hell? By the logic of these trend stories, nothing is truly discovered until a certain subset of New Yorkers — the most hardheaded middle-class cosmopolitan denizens at the absolute center of modern civilization — try it on for size, for the first time, however fashionably late we may be. And what have we discovered now?

Cars! Buying and leasing, four wheels, the smell of gas and the joys of the open road. Emissions-spewing, fossil-fuel-guzzling automobiles — have you heard? They help you leave places quickly, and in a hermetically sealed bubble where the only expelled aerosols we have to inhale are the best kind: our own.

Maybe when "normalcy" returns sometime (my guess) during '22, but if "cars are trending" in NY, imagine what it be in other urban areas that have always had greater "attachment" to autos, i.e. everywhere else.

by Jeff Smith
Fri Aug 14, 2020 1:43 pm
Having lived on E 87th off Third from 94-96, I can say that the cost of owning a car in NYC is PROHIBITIVE. And that was 25 years ago. Will there be more social distancing and telecommuting? Sure. But NYC will rebound, and so will transit.
Next stop, Willoughby
~el Jefe ("Jeff Smith Rules") :: RAILROAD.NET Site Administrator/Co-Owner

by gokeefe
Fri Aug 14, 2020 7:07 pm
In the meantime there is a "brief" (three years) window of lower demand that will allow make some of these capital projects easier to complete.

by David Benton
Fri Aug 14, 2020 7:34 pm
Hopefully a stimulus package including public transport will appear in the next term.
Moderator worldwide railfan , Rail travel & trip reports
The only train trips I regret are the ones I didn't take.

by BandA
Mon Aug 17, 2020 6:07 pm
what is block 807 on 7th avenue across from Penn Station? Why is it special, i.e. not slated for redevelopment in this plan? Edit: 11 Penn Plaza, former Equitable Life building. Apparently too precious, so must be cheaper to truss up than buy out?

by DogBert
Wed Aug 19, 2020 8:53 am
The trend towards WFH is likely to stick, at least from what I can see in the tech industry. Even when people do go to the office it likely won't be for more than 2-3 days per week, while working from home the rest of the time. Plus anyone with even a slight sneeze or cough likely won't be heading to offices like they used to. The daily news completely closing their news room is a sign of things to come. Companies like twitter have already said there's no need to come back...

We may have seen the peek of transit ridership before Covid.

NYC will make some form of a comeback as it always does, but without a big bailout, transit finances are in a world of pain. People who commute 2-3 days a week at best will not be buying monthly tickets.