Many years ago I took a short vacation with my two little girls in tow. We had little money so the trip was short. But I took them to the A&A railroad and we rode to train. I'm no sure now what engine was being used that day but it seems to me that it was the 14. The engine was not superheated but I can't remember what number it is. My girls were 12 and 9 at that time. Today, many years later, they're 30 and 27. To this day, this is the one trip that they still talk about. The day Dad took us to the railroad and we got covered in oil and soot. I have a picture of my youngest on top of the coal pile in the yard. It's surprising what kids remember. Since that time we'vew been to Disney World and they (with my first wife) have been to Spain, Italy and Mexico. Yet this is the trip they remember to most.
One day when my new wife and I were there, we rode the train the first two trips. I hadn't had enough yet so we bought tickets for the last trip of the day. The old Engineer, I think his name was Cartwright or something like that, ran into us and he asked us why we hadn't left yet. We told him we were going to ride the last train that day to help support the railroad. His replay was, "when we get up to the station and we do the run-around, you guys ride with me in the cab". WHOA! The wife was his look-out on the fireman's side and we ran the run-around with the crew. What a treat!
These are a fine bunch of people down there and I hope that everyone who reads this forum makes the effort to get down there - no matter what power they're running that day.
Good luck to them!
Top

any updates for '08? I remember riding as a kid behind #18. I went up a few times last summer hoping to see steam, but no luck.

Still a nice ride behind the centercabs, but it's not the same.
Top

With the new season a couple of months away, I was wondering what the plans were involving #18. I know that if it is running it will be running, but are there planned any special events to "dedicate" it back to service? Any special trains, or champagne toasts, or anything else? Or will it just suddenly show up pulling a train?
Benjamin L. Maggi
A&A Railroad Forum Moderator
Top

Ben and all of the steam fans awaiting with baited breath,

There will be some sort of official announcement on the return to steam once everything is in order. Hydros have been passed, the form 4 completed and submitted, now an official word needs to be received from the FRA in some form prior to any public commitments. The only tests of sorts remaining are some actual road tests under her own power to "shake" everything loose. She has been under steam at the shop this past fall I beleive. It is definitly getting closer.

About darn time... its only taken seven years!!!

If 18 runs this year, be thankful it has only taken 7 years. In February 2000, I was one of the last engineers to run steam at the MidContinent Rwy Museum in North Freedom, WI. Our engines have been undergoing Form 4 repairs since then, with two full-time crew working in the shop plus thousands of volunteer hours. Between the two locomotives the museum is working on, I'll venture we have spent over a half million dollars so far. Steam locomotives the age of 14, 18 and our engines at MidContinent means lots of hidden problems, especially since for the 20 or more years prior, there was no Class 5 repair done to these locomotives. We all kept them going as best we could, doing our 30 and 90 day and annual inspections and just enough maintenance to keep 'em rolling.

While my favorite is 14 (because I worked on it), I am happy that 18 will be running shortly. It is a tribute that the staff there has been able to complete their Form 4 repairs and certification in such a short time without a heavy revenue source to cover the expense.
Ken
Top

I saw #18 sitting out side on Saturday. Looked like they gave her a test run. Pat do you know if they tested or not?

It is indeed true, #18 was out on a test run on Saturday. I will post a picture here soon.

The locomotive was fired up for a special presentation for Senator Dale Volker who secured a grant for part of the restoration work. He was in town, so the railroad presented him with a plaque and thanks by showing him the locomotive operational. It was a nice ceremony, including the Senator and his staff, railroad officials and employees. The railroad wishes to extend thanks to the many people who made the restoration possible, including the employees who spent countless hours on the restoration and repair, the Senator, the local community as well as several local businesses who also contributed. The paint job was applied by one of the A&A employees. It was a picture perfect day for the event.

The locomotive was fired up and operated under her own power. A test run was made north to Genesee Road. It was mainly done to check clearances on crossing surfaces and as a shake down of all of the moving parts. It hasn't moved much more than outside of the shop in over 6 years! Things did seem to go well, only a slight adjustment on the wedges. Work had been done on the two air compressors, they seem to operate as expected too. It sure sounded good to hear the echo of the steam whistle again!

The railroad will be issuing a formal announcement about the return to steam at some point in the near future. The paperwork end of it is in the proper hands at Washington. Coal should be ordered, a few more shake down sessions and she should return to the head of the passenger varnish.

That's Great.
Nothing is impossible for the person that does not have to do it!
Top

Most of the A&A passengers are from the Buffalo and Rochester markets.
Top

Ken, you said it right about the fact that these locomotives haven't seen anything close to this kind of maintenance in a very long time, if at all! To my knowledge, the A&A hasn't ever had a locomotive stripped down to that degree. (For sure not 14 or 18) I think even in their earliest days, if an engine got to the point of needing that kind of repair, it was contracted or sent out. I know that old #6 was retubed by the PRR in the later years.
Top

Here are a couple of pictures of the APril 19th test run: 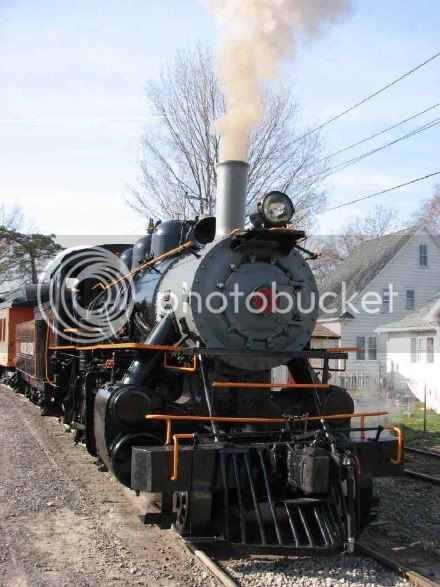 Didn't want to "steal Pat's thunder". here's a few of the shots I took