Noel Weaver wrote:It does not look like any part of the Maybrook Line, too straight for one thing. I think it is in the State of Massachusetts, why, because the grade crossing sign is peculiar to the style of early such signs in Massachusetts. I remember seeing some of this nature on the New Haven's Berkshire Line around Ashley Falls many, many years ago. Way back when different states had different styles of grade crossing signs, New York, Pennsylvania, Massachusetts, Connecticut and Maine come to mind but I guess most of the others had different styles as well.
Noel Weaver

I've seen pics of these crossing signs on the upper NYC Harlem Division, although I can't judge on trolley lines in the Harlem Valley. Anyone?
Top

I remember crossing the Harlem at Copake many years ago when the line was in its final days, but I don't recall that it was double-tracked.
Top

trainsinmaine wrote:I remember crossing the Harlem at Copake many years ago when the line was in its final days, but I don't recall that it was double-tracked.

So far as I know, the double track on the Harlem Division has always ended at Brewster, like it does today.
Top

trainsinmaine wrote:I just looked at the 1948 USGS topo map of the Pittsfield East northeast quadrant. Dalton Road comes up a hill and makes an almost 90-degree turn before crossing the B&A and hooking onto Route 8. The B&A makes a long curve to the west just north of that point. If it was Dalton Road that hosted the Berkshire Street Rwy interurban, I think we may have our mystery solved. The trolley came up the hill alongside the road, swung south, went up over the B&A on a bridge, then went down Route 8 into the village.

Whaddya think? I haven't been to Hinsdale in about 44 years and I know neither its history nor the lay of the land.


I've done some follow-up. I have Cummings' book on the Berkshire Street Railway, where there is some mention (and a downtown photo) of the branch to Hinsdale. He alludes (pp. 22-23) to a B&A underpass called "The Gaffney Bridge" on East Road/Dalton Road, where a serious wreck occurred in 1910, and to another underpass as the line approached Hinsdale itself. So much for my theory, apparently. (I should add that I still had some doubt, from the appearance of the telegraph poles, that this was the B&A to begin with, even though the topography seems to fit.)
Top

Just a couple of observations. Judging by the shadows, it looks to me like this was taken looking pretty much in a southerly direction and in mid afternoon. I see that the trees are pretty much bare yet the lack of visible leaf debris suggests to me that this was taken in early spring, maybe a march/early april timeframe. It looks to me like there are two individuals at the far end of the fill, one in between the tracks and one in the middle of the right hand track. The location of the tell-tale tells me that the photo was taken either from a bridge or a tunnel portal. I find it interesting but unlikely that there would be a highway bridge in such close proximity to an at grade crossing but then again, "never say never".. Could it then be from another line crossing on a bridge?

This is starting to get to me..
Seen behind the motorman on the inside wall of a PCC departing "Riverside" many years ago: "Pickpockets are on duty for your convenience."
Top

after finding the postcard online at the website listed on the photo, i viewed the backside. it states a location, handwritten by the original postcard "sender", "This Rail Road runs along the [illegible, but could be Goxxn - where the x indicates unknown] river valley and is a beautiful ride". there's a later annotation that states "Conn", but that may not be accurate.

after blowing up the image, i'm almost convinced that there's a cemetery on the hill in the foreground on the right side.

Just had a maybe-not-off-the-wall thought: It is possible that the mountain miles away in the background is Wachusett, viewed from the south, and that we're looking at the Norwich and Worcester?
Top

Here's the reverse of the postcard: 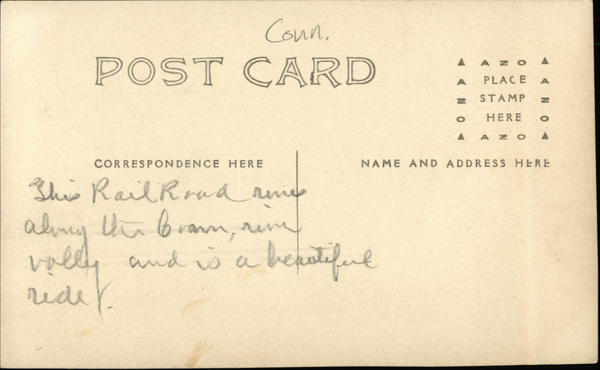 I can't read the old cursive, but perhaps someone else can.

The original listing is here.
Top

I (and probably everyone else) can read the whole thing except the name of the river. That first letter has to be either a capital C or a capital G. If the name is intended as an abbreviation, it could be "Conn" for Connecticut, but the writer was such a poor penman, who knows?
Top

trainsinmaine wrote:Just had a maybe-not-off-the-wall thought: It is possible that the mountain miles away in the background is Wachusett, viewed from the south, and that we're looking at the Norwich and Worcester?

No, that line was never double tracked. The combination of that robust-looking double track mainline and the hills narrows the possible locations. As Mr. Weaver notes above, the grade crossing signs are of a sort once found in Massachusetts -- there were a few still around on branchlines into the 1960s including at least one on the B&A Grand Junction line in Chelsea or East Boston -- but I'm sure they were found in other states as well.

I've gone through a bunch of possible interpretations of that mystery river name in my mind and nothing in New England that had a double-track mainline railroad seems to work. Maybe this isn't a New England scene after all?
Top

I get "along the Conn River Valley" in which the somebody who previously mentioned facing North and South would be correct.
Top

could be a "C", "G", or "B". second letter appears to be "o" based on other words in the card. next one or two are hard to decipher, and the last looks like an "n", again from other words.
member, new hampshire timberland owners association
Top

Could this be one of the E-W lines that cut across northern NJ? The Lehigh Valley, CNJ, or DL&W? I've been staring at those hills and they do look a bit like the countryside you go through driving East on I-78 from Phillipsburg.
Top

Yesterday, my friend who first forwarded the photo also forwarded it to a retired B&M engineer who used to work the Conn River line. He maintains that it is indeed the Conn River, and that the photo was taken from a bridge near North Charlestown.
The track to the left, however, baffled him. He doesn't think it was a trolley --- it doesn't square with the location of the junction of the Conn River and the ST, and the elevation is too high --- but he thinks it may have been a work track left over from when the railroad was being built. He says this section of the Conn River was relocated around the turn of the century,
and this photo depicts the new tracks.

The mystery isn't quite over, though. Why would there have been a bridge immediately adjacent to a road crossing, and if the line to the left wasn't a trolley, what kind of engine would have been able to haul filled cars up such a precipitous hill?